Abstract
Social control theory and social learning theory are two theories that suggest why deviant behavior is chosen to be acted upon by some individuals and not others. Both take a different stance on the issue. Social control theory suggests people’s behavior is based on their bonds to society, if they have strong bonds to society they conform and if not they have a tendency to act out or become involved in criminal or deviant behavior.

Social learning theory suggest that through vicarious learning people learn from observing others and based on what the observe make the choice of whether to copy those actions to obtain desired results or chose not to if the results they see are undesirable. The explanations of both theories are presented and a conclusion of why social learning theory is more acceptable on explaining the reasons people engage in delinquent behavior is presented.

Social control theory proposes that through socialization and social learning individuals form attachments to others and develop self control as they do not want to disappoint others (Hirschi & Gottfredson, 1993).

Social control theory purposes that there are the four elements that together determine the level of bond to society; attachment in which an individual relates how he or she feels about others; commitment whereby the subject seeks to accomplish specific goals; involvement by participation in social activities; and belief of what society accepts to be morally right or legal (Simons, Simons, & Wallace, 2004, p. 20-21).

Social learning theorists suggest that individuals develop their social tendencies based on how they interact with their environment (Simons, Simons, & Wallace, 2004, p. 33). One way to do this is through vicarious learning in which an individual learns by observing others. An individual can learn what is acceptable to society and what is not so favorable just by observing the outcomes of others actions (Simons, Simons, & Wallace, 2004, p. 44). The following will explain the different perspectives of why people engage in delinquent behaviors based on social control theory and social learning theory and why social learning theory is the best explanation of deviant behavior. Social control theory

Social control theory did not become a widely accepted theory until Travis Hirschi published his book Causes of Delinquency in 1969. His reasoning on why most people conform to society rather than act out in a deviant and delinquent manner was that individuals formed bonds with society. He further went on to explain that individuals who acted out in a delinquent manner did so because their bond to society had been weakened or broken. Hirschi suggested that the bond to society has four elements. The first element is attachment, which identifies how an individual feels about the people around him such as peers, teachers, or parents (Simons, Simons, & Wallace, 2004, p. 19-20). People in general want to be accepted by society and the people around them. To gain this acceptance a child may clean his room to make his parents happy and possibly receive a reward from them. A teenager might smoke a cigarette to fit in with their peers at school or an adult might work a weekend to make the boss happy or in hopes of a raise. All these are examples of how people try to become accepted by society and how they try to form positive attachments to others.

The second element in Hirschi bond to society is commitment. In this form of commitment an individual is seeking a common interest in society that is accepted and condoned. Such an individual might seek to earn good grades in school, become a member of a sports team, volunteer for a good cause, or seek a highly sought-after job position (Simons, Simons, & Wallace, 2004, p. 20). All of these are goals that require a certain level of focus and that denounce delinquent behavior. The time and energy devoted to achieving these goals leaves less time for deviant actions (Hirschi & Gottfredson, 1993, p. 47-54). Also to achieve many of these goals it is very helpful not to participate in delinquent behavior because it is looked upon negatively and could hinder the achievement of the goals. The third element in Hirschi bond to society is involvement. Involvement in this theory is simply the level of participation an individual actively pursues in conventional activities. Some of the activities this could include are social events, sports teams, school clubs, religious organizations, family events, or simply a job. These types of activities keep people busy and provide less time to participate or get caught up in delinquent behavior.

This is especially the case for adolescents as they are highly influenced by peers who may not lead them to the best choices on how to spend their time, which could lead to deviant behavior (Simons, Simons, & Wallace, 2004, p. 21). The fourth and final element is belief (Simons, Simons, & Wallace, 2004, p. 21). Parents and teachers can play an important role in children’s lives by teaching them right from wrong, moral issues, and the basic rules and laws of society. How the child comes to understand, accept, and believe in these concepts will determine how he or she acts. If the child believes in these rules and laws and accepts them he or she is more likely to follow the law and less likely to partake in delinquent behavior, the opposite holds true if he or she does not believe in the rules or do not care or fear the consequences of breaking these rules (Hirschi & Gottfredson, 1993, p. 47-54).

Social control theory suggest people who conform to society and the social norms by forming attachments to others, developing commitments by setting goals, becoming involved in the community, and following set beliefs and the law, are less likely to perform delinquent acts. People who do not conform to societies norms are often seen as delinquents or criminals. Delinquents and criminals often do not form the attachments to others, develop positive goals, participate in community events, or care about common moral beliefs or the law (Simons, Simons, & Wallace, 2004, p. 21). Social control theory suggest that the reason individuals become criminals or delinquents is the breakdown in the bonds to society and leaves the individual more susceptible to engaging in criminal activity (Akers, 1990, p. 653-676). Social learning theory

Contrary to what social control theory suggest by assuming all children are inherently antisocial although effective parenting can teach children to control themselves, social learning theory suggest that children are not inherently good or bad, but acquire their social tendencies on how they react with others in their environment (Simons, Simons, & Wallace, 2004, p. 33). Albert Bandura suggests that vicarious learning is the process of learning by observing others actions rather than learning from one’s own experiences. “Vicarious learning involves taking note of the consequences that follow when people engage in various actions” (Simons, Simons, & Wallace, 2004, p. 44). Individuals can learn both positive and negative behavior through vicarious learning.

Vicarious learning does not have to be only learned by observing others but also can be learned through watching movies and television, reading books and magazines, or by listening to stories of situations that other people have experienced (Simons, Simons, & Wallace, 2004, p. 44). People tend to look at other people around their own age, race, and gender and see what type of specific results they achieve from specific actions. People also have roles models or persons they respect for one reason or another and tend to emulate these people to try to get desired results. Vicarious learning is not just about copying what these role models or peers do, but taking into account the results. The desired results are sought-after by imitating the actions one took to get there while the undesired results are discarded. It is a process and not just an all inclusive to copy every action of another (Simons, Simons, & Wallace, 2004, p. 45). Bandura (1977, 1986) argues that vicarious learning does not just involve learning about the consequences of various discrete actions.

Rather individuals induce underlying rules regarding the types of behaviors rewarded versus those that are punished. Bandura refers to this process as “abstract modeling.” Based on watching a variety of people acting in various situations, an individual can extract general rules that summarize the contingencies that appear to be principles, to formulate his or her own plans of action (Simons, Simons, & Wallace, 2004, p. 45). This must be taken a step further and not only observe the action but also be able to retain the information require to replicate the action to reach the desired result. Children have roles models and people they look up too and try to emulate what these roles models do. These role models can be parents, teachers, movie stars, or other children. Children engage in the same type of behavior of the role model to get a desired result. If the child sees a parent take money from another parent’s purse or wallet when the other spouse is not around, the child might try that in the future because he or she can get the desired result of possessing more money.

If a child sees another child acting as a bully, vandalizing property, or smoking, he or she might try it because other children think it is cool. A child might see a parent missed work because of a hangover and think that nothing happened to the parent and copy this to miss work later in life. What the child did not see in these instances was that the other parent got mad about the missing money, when the child got in trouble for getting caught being the bully, vandal, or smoker, or when the parent did not get the raise or promotion because he or she skipped work. If the child does see the results of the wrongdoing in these cases and decides it is not worth the punishment for the possible reward he or she may decide not to imitate the action. This is the power of vicarious learning in that an individual has the choice to adopt his or he behavior to reach desired outcomes and discard actions that led to undesired outcomes.

In conclusion, social control theory suggests when an individual fails to form or loses his or her bonds to society in the form of attachments, that the individual will become delinquent. This does not explain how many people missing the suggested key attachments to society; commitments, aspirations, or involvements with society, go on to lead criminal free lives. Social learning theory through the form of vicarious learning is a more proven and more acceptable as the dominant of the two theories. Every day children learn from parents and peers, and students from teachers. People see what others do and how they are treated for their actions and make a choice if that is how they want to be treated. If it is they try to imitate the actions to get the same or better results, if not, they simply choose not to participate in those actions. 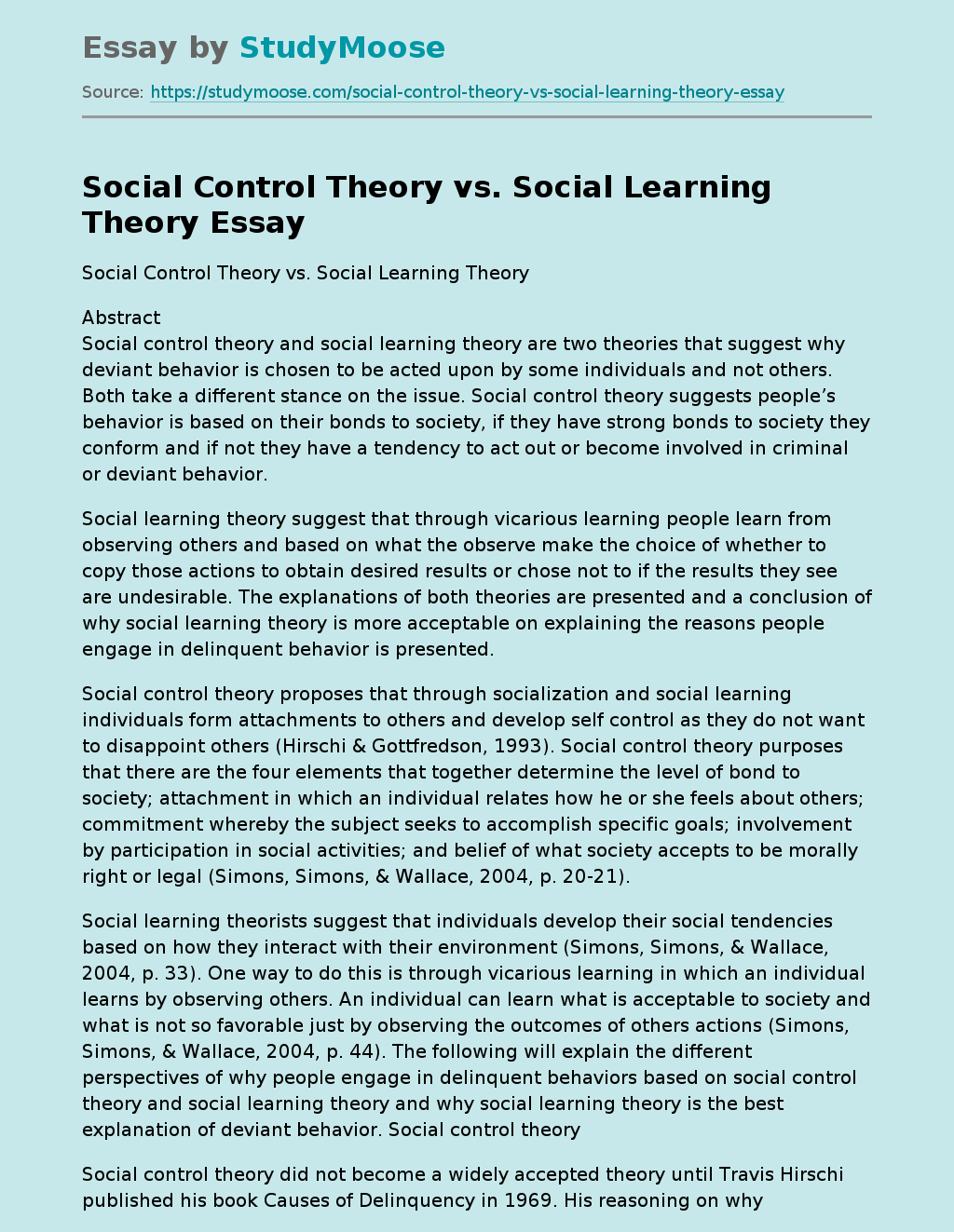