According to Mayer (2011), Learning is a process of acquiring, remembering, and applying skills, knowledge, attitudes, and other modes of response. It involves a relatively permanent change in behavior or knowledge as a result of an experience or practice due to exposure in the environment.

Observational learning is learning by use of our naked eyes. It involves emulating the actions or behaviors of other people and try to own them. For instance; in class, a learner can copy how the teacher walks, speaks, explains, and even the teacher’s conduct.

Therefore, the teacher should be a role model and an example worth being emulated (Rohbanfard & Proteau, 2011).

It is also called Social learning theory. McLeod (2011) defines it as a theory of learning process and social behavior which proposes that new behaviors can be acquired by observing and imitating others. It states that learning is a cognitive process that takes place in a social context and can occur purely through observation or direct instruction, even in the absence of motor reproduction or direct reinforcement.

McCullough (2011) argues that; Social learning theory is one of the most influential theories of learning and human development and is rooted in many of the basic concepts of traditional learning. The theory focuses on learning that occurs within a social context and that people learn from one another. It proposes that people can learn new information and behaviors by observing other people.

Thus, the use of observational learning, imitation, or modeling explains a wide variety of human behaviors using the social learning theory approach.

McLeod (2011) continues to argue that individuals that are observed are called models. For instance, in society children are surrounded by many influential models, such as parents within the family, characters on children’s Television, friends within their peer group and teachers at school. These models provide examples of masculine and feminine behavior to observe and imitate.

Children pay attention to some of these models and encode their behavior. At a later time, they may imitate the behavior they have observed and they may do this regardless of whether the behavior is gender appropriate or not but there are a number of processes that make it more likely that a child will reproduce the behavior that its society deems suitable for its sex.

For example; Bandura gave an example of a Bobo Doll Study about a woman who became aggressive to a Bobo doll, began hitting it, and shouting aggressive words in a video that the kids were watching. Surprisingly, these kids were enclosed in a room and they also began imitating what the woman was doing. That is; they also began being aggressive including hitting, kicking, punching, and hammering the Bobo doll that they had observed in the video. Hence, they were influenced by the actions of the woman and they learned through observing her actions.

This implies that the teachers should be exemplary, creative, use attractive models, employ in practical skills friendly to learners, and use real examples among others. Observational learning plays a great role to the learners because they are able to develop coping strategies to manage fear within the social and cultural context, develop skills and knowledge concerning self-control and also communication skills that will permit boundaries to be more open that will allow ways of expressing feelings, meeting people, and sharing with family and friends (Fryling et al, 2011).

The learner will imitate the model’s behavior if the model possesses characteristics such as talent, intelligence, power, good looks, or popularity that the learner finds attractive or desirable.

A difference comes in when an observer acquires a behavior and in the process of performing that behavior. Through observation, the learner can acquire the behavior without performing it. The learner may then later, in situations where there is an incentive to do so, display the behavior.

According to Graham & Arshad-Ayaz (2016); Learning by observation involves four separate processes: attention, retention, production and motivation as discussed below:

Attention: This is the concentration of the mental and physical ability on a given aspect without being distracted. Observers cannot learn unless they pay attention to what’s happening around them. This process is influenced by characteristics of the model, such as how much one likes or identifies with the model, and by characteristics of the learner, such as the learner’s expectations or level of emotional arousal.

Retention: This is the ability to recall something. Observers must not only recognize the observed behavior but also remember it at some later time. This process depends on the learner’s ability to code or structure the information in an easily remembered form or to mentally or physically rehearse the model’s actions.

Production: This is the act of producing something. Observers must be physically or intellectually capable of producing the act. In many cases the learner possesses the necessary responses. But sometimes, reproducing the model’s actions may involve skills the learner has not yet acquired. It is one thing to carefully watch a dancer, but it is quite another to go home and repeat those acts.

Motivation: it is a state that energizes, directs and sustains behavior. In general, observers will perform the act only if they have some motivation or reason to do so. The presence of reinforcement or punishment, either to the model or directly to the learner, becomes most important in this process.

Graham et la (2016) continue to argue that; attention and retention account for the acquisition or learning of a model’s behavior while production and motivation control the performance.

Cherry (2011) argues that, much of what a person knows comes from environmental resources such as television, parents, and books. The environment also affects behavior: what a person observes can strongly influence what he does. But a person’s behavior also contributes to his environment.

In conclusion, Observational learning theory is relatively simple to understand because it relies only on observable changes and has a great impact on learning. Therefore, the students must get a chance to observe and model the behavior that leads to positive reinforcement. On the other hand, Educators must encourage collaborative learning since much of learning happens within important social and environmental contexts.

However, a learned behavior often cannot be performed unless there is the right environment for it. Educators must provide the incentive and the supportive environment for the behavior to happen. Otherwise, the assessment may not be accurate.

Social learning theory offers a structured and learned approach to dealing with a variety of behavioral concerns in many different disciplines and settings. 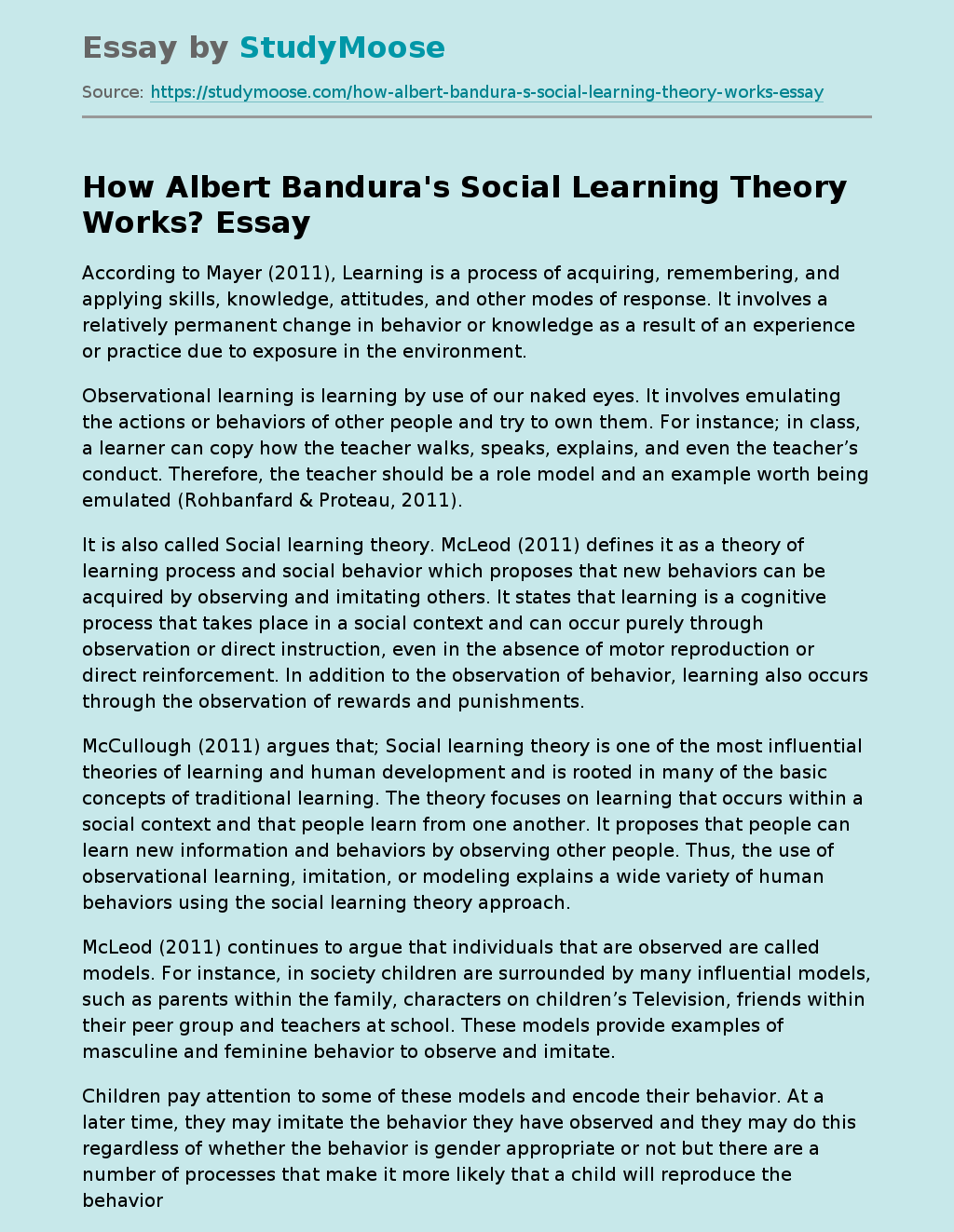