The study of human behavior or behaviorism focuses on attributes of humanity that are discernible, measurable and which can be manipulated. The emphasis of behaviorism is on experimental methods and avoids attributes that are subjective, internal or unavailable. The experimental method involves the manipulation of one variable and measurement of its effect on another variable. It is from the study of variable and effects that a Canadian psychologist, Albert Bandura found the cognitive theory (or social cognitive theory) (Bandura, 2006).

Bandura for instance observed aggressive behavior in adolescents and opined that the aggressiveness is caused by the environment in which the adolescents grow.

Don't use plagiarized sources. Get your custom essay on
“ Analysis of Bandura’s Cognitive Theory in Psychology ”
Get custom paper
NEW! smart matching with writer

On the other hand, he also realized that behavior causes an environment as well. Thus, since behavior and environment are causes and effects of each other, Bandura referred to the concept as reciprocal determinism (Bandura1986). In short, Bandura’s theory was based on the fact that the world and a person’s character (behavior) affect each other (Bandura, 1986).

While it would appear that the environment was the cause of behavior and personality, Bandura also realized that personality is an interaction of a person’s psychological responses in relation to the environment (Bandura, 2006). The psychological processes consist of the human being’s ability to entertain different images and languages. Thus, the cognitive theory is built on two essential principles.

The first one is a framework for explaining how different personalities function, whereas the other one addresses the type of variables (that is the elements of analysis) on which the personality theory should be centred (Bandura, 2006).

In analysis of the influence of reciprocal determinism, Bandura categorically uses the word “determinism” to imply the aspect in which effects are produced by events (Bandura, 2006). However, this opinion does not mean that a human being’s actions arise from straightforward and predictable chains of cause and consequence.

Rather, it implies that events produce effects by chance. As a result, the probability or chance of an event producing an effect is emphasized in Bandura’s cognitive theory (Bandura, 2006). Perhaps the most significant aspect of Bandura’s theory is the way in which the theory treats behavior. Unlike many other theoretical frameworks, this theory has equal action on both the input of the personality and the output of personality (Bandura, 1986). In essence, Bandura’s opinion is that a person’s actions and the resultant effects shape the person’s aptitude, feelings and belief in one self (Bandura, 2006).

For example, many behaviorist theories depict scant curiosity in self-process because the theorists assume that human functioning is caused by external stimulus rather than the internal stimulus which is only considered as transmitting rather than causing behavior (Bandura, 1986). This paper critically evaluates the notable features of Bandura’s cognitive theory and discusses in detail the viewpoint of the Bandura at the time of formulation of the theory and the theory’s subsequent modification.

The paper will also appraise the strengths and weaknesses of the theory based on the discussion. Analysis of the salient features of Bandura’s cognitive theory The most notable feature of Bandura’s social cognitive theory is the concept of reciprocal determinism (Bandura, 1986). Reciprocal determinism is a phenomenon that implies the causes and effects of different actions on behavior and environment and how they affect each other.

Thus, Bandura’s theory was based on the point that personal factors in the form of cognition, biological events and affect, behavior and environmental factors create interfaces that result in a triadic reciprocality as illustrated in Figure 1. Figure 1: The foundation of Bandura’s (1986) concept of the social cognitive theory. Source: Created from the description by Bandura (2006) Bandura modified the label of his theory from the common perspective of social learning to social cognitive in order to distance it from the common social learning theories of his time (Bandura, 1986).

He also wanted to lay emphasis on the idea that cognition plays a significant role in people’s capability to construct reality, regulate their personality, encode information and display other kinds of behavior. According to Bandura (1971), the reciprocal form of the determinants of individual human functioning in social cognitive theory enables services such as therapeutic and counseling efforts to be rendered with focus on personal environment or behavioral factors as illustrated in the diagram above.

Based on this, strategies to improve a person’s well-being can be aimed at ameliorating the emotional, cognitive and motivational process of the human being (Bandura, 1986). The focus can also be on improving behavioral capabilities or changing the communal conditions under which people live and work. As an example, teachers in schools have a role to not only improve their students’ academic learning and confidence, but also boost their (students’) self-beliefs and habits of thinking.

Hence, teachers and students have to embrace all the components of Bandura’s triadic expression of cognitive theory. As earlier mentioned, Bandura’s social cognitive theory sets itself aside from other theories that overemphasize the role played by environmental factors in the development of human behavior (Bandura, 1986; Bandura, 2006). These theories are often dismissed since they have the redundant factor of cause and effect that is unworthy in the context of evaluating the psychological aspect of human beings.

Thus according to Bandura, psychology per se without a clear self-examination cannot purport to explain the complexities of human intricacies of human functioning. Bandura (1986) further noted it is by evaluating their own conscious minds that people discern their own psychological processes. Therefore, in order to predict how the human behavior is affected by environmental outcomes, it is imperative that the individual’s cognitive process and how he or she interprets the outcomes be understood.

Analysis of Bandura’s Cognitive Theory in Psychology. (2017, May 19). Retrieved from http://studymoose.com/analysis-of-banduras-cognitive-theory-in-psychology-essay 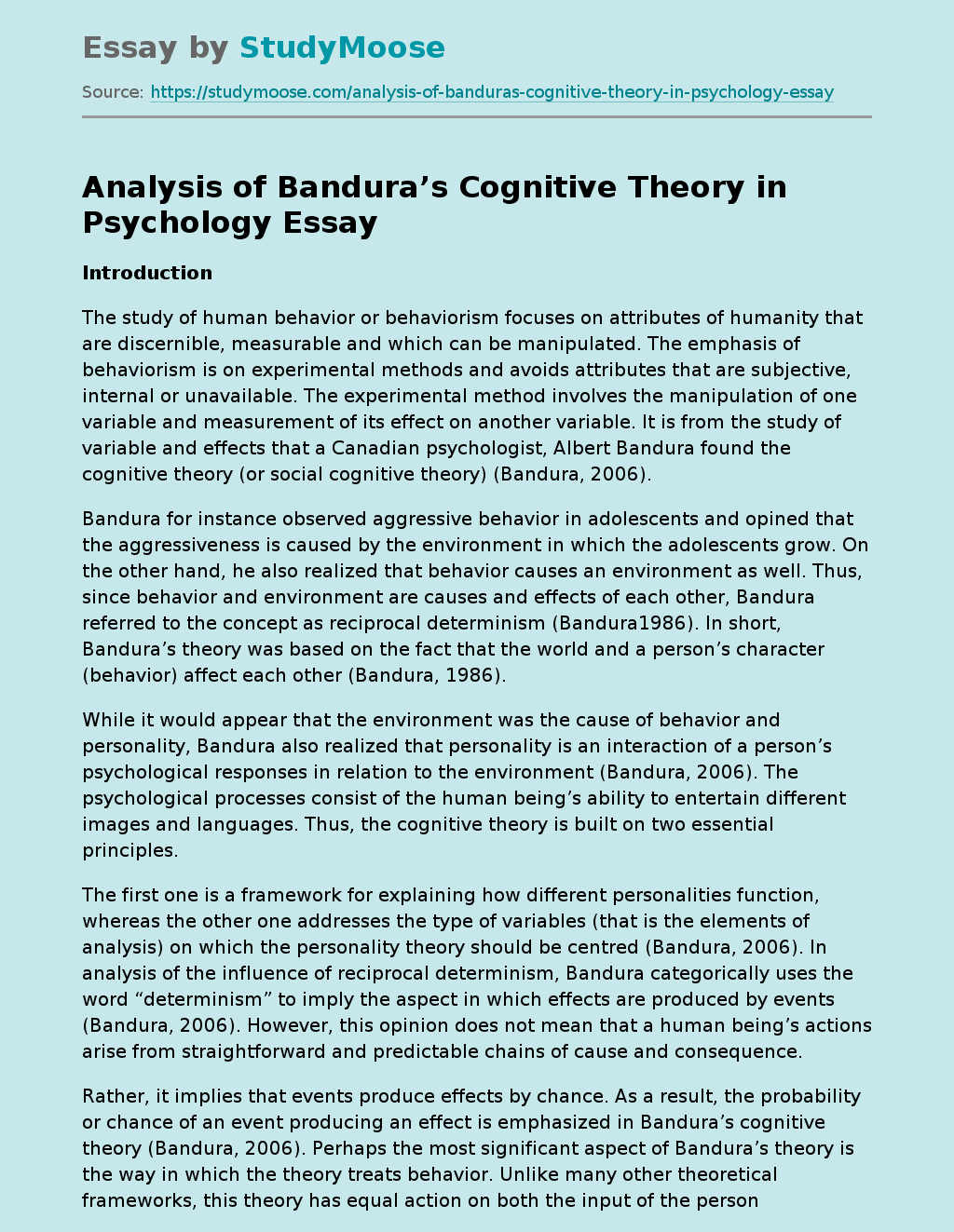