Cognitive psychology is the study of mental processes surrounding learning, memory, perception, and thought. Though it is still a relatively new formal branch of psychology, its roots extend back to Descartes who sought a way to explain how the mind worked, proposing the analogy of a “hydraulic system of nerve function” (Willingham, 2007, p. 26) after he observed animated statues in Saint-Germain-en-Laye. It has been the restless pursuit of not only the idea of how the mind works but also what exactly constituted the mind that eventually led to the foundations of cognitive theory.

As psychologists examined how mental processes produced behavior, it was evident a different approach would be needed. Cognitive psychology developed primarily from the inability of the behaviorist approach to fully explain every form of behavior. While there were many things that drove its development, there were four main milestones in the development of cognitive psychology: the inadequacies of behaviorism, the information processing model and computer metaphor, artificial intelligence, and neuroscience.

Each of these four milestones contributed significantly to the search for a better model and the development of the cognitive approach, which we have today. Behaviorism had many shortfalls with its primary one being that it excluded the effect of genetics entirely. It only accounted for what had been learned through reward and punishment only. Questions were raised and answers were missing when examining the question through the lens of behaviorism only. One area where ethologists observed discrepancies were in fixed-action patterns and critical periods in animals. Fixed-action patterns were behaviors that received little to no reward or punishment in which the animals engaged in and critical period referred to a specific period of time in which if a behavior has not been learned, it may never be able to be learned.

Another area in which behaviorism could not provide consistent answers was in language acquisition. Behaviorism posited that language was learned or imitated as modeled by someone else. However, there were points that the behaviorist perspective did not address.

First, learning cannot account for the rapid rate children acquire language. Second, there are an infinite number of sentences and all cannot be learned by imitation. Next, children consistently make errors in things like verb tense. Since adults usually use correct form, this would not be learned by imitation. And last, children acquire their language skills even if adults do not correct their syntax (Language and Cognition, 2013). These points show there must be other explanations such as innate language skills to further explain the acquisition of language. These points seemed best explained by the cognitive perspective using theories, such as innate language centers. The second milestone, the information processing model, was very influential in moving closer to a cognitive approach through the computer metaphor. There were many attempts to find a way to explain how the mind worked, including a switchboard and solenoids but these did not fully explain how the mental processes (Willingham, 2007). In the computer analogy, the brain was likened to the hardware of a computer and thought processes were likened to computer software.

The ‘mind is like a computer’ draws the connection between the input we receive from our environment to the mental processes that leads to the output of behavior. This analogy was revolutionary in the way psychologists studied the mine and led to the information processing model. With this model, psychologists began to ask questions about and use the scientific method to look at how the mind processed input resulting in behavior, instead of only the behavior itself. Artificial intelligence was the third milestone and is defined as “the ability of a computer or other machine to perform those activities that are normally thought to require intelligence” (Artificial intelligence, n.d.). In the 1950s, an artificial intelligence program was developed by Allen Newell and Herb Simon that proved theorems in formal logic using abstract constructs and representations. This A.I. program demonstrated sophisticated “behavior”, it solved problems similarly to how humans solved them, and it used abstract constructs (Willingham, 2007).

Through the artificial intelligence, it became apparent to researchers that the human mind processed information much like a computer, using representations and processes and this approach could help give deeper insight into the processes of the mind and the resulting behavior. The last main milestone, neuroscience, is “a branch (as neurophysiology) of science that deals with the anatomy, physiology, biochemistry, or molecular biology of nerves and nervous tissue and especially their relation to behavior and learning” (m-w.com, n.d.). The focus is on the brain and its impact on behavior as well as normal cognitive functions and the impact on the nervous system resulting from neurological, psychological, and neurodevelopmental disorders. Neuroscience began to show a clear connection between behavior and specific structures of the brain. This connection revealed the biological side of behavior that could not be ignored. Studying behavior from this aspect allows a clear picture of a how disorders affect the brain itself initiating behavior and can be compared to normal behavior to gain greater perspective.

This removes much of the subjectivity that initially made the cognitive perspective suspect. Cognitive psychology developed the framework to test theories and further explain behavior using behavioral observation. Using the scientific method, the theory predicts the behavior to be expected if the said theory is provable. There are several steps to take in order to this. First, develop alternative theories by having at least two possibilities to select from when testing the hypothesis. Second, derive specific predictions for each theory by providing a bridge between the observable and unobservable in order to accurately confirm or disprove. And lastly, the compilation of sufficient data by which to compare the theories to validate both the methods and the results. Research methods that are employed using behavioral observation to test cognitive theories are descriptive research, relational research, and experimental research. Descriptive research consists of naturalistic observation, case studies, and self-reporting, all of which are describing a behavior as found in the world (Willingham, 2007, p. 43).

Relational research is much like its name in that it is observing two or more behaviors and discerning how they are related. Experimental research is testing what has been observed and determining if the theory can be confirmed or disproved using the scientific method. Using verifiable research methods, for example, there are an “increasing number of cognitive models of anxiety disorders that seek to provide a complex integrative view of their underlying cognitive processes and structures” (Eysenk, 2004). The study of cognitive psychology has been a critical step toward understanding how behavior develops. It has opened the doors to increased research that is measureable and theories that could be empirically tested to confirm or disprove cognitive theories.

This has granted us numerous insights into the connections between the brain and behavior and continues to be a source of learning. Additionally, it has had positive impacts on behavioral treatments as shown by Eysenk, “some of the theoretical and empirical contributions emerging from the cognitive approach have direct implications for therapeutic interventions” (Eysenk, 2004). In the end, the ability to form and research theories has brought these two fields of behaviorism and cognitive perspective together through an understanding of the connection between observable behavior and mental processes. It has paved the way for artificial intelligence, which is used in almost every discipline, and neuroscience and promises to continue to improve treatments and shed light on behavior. 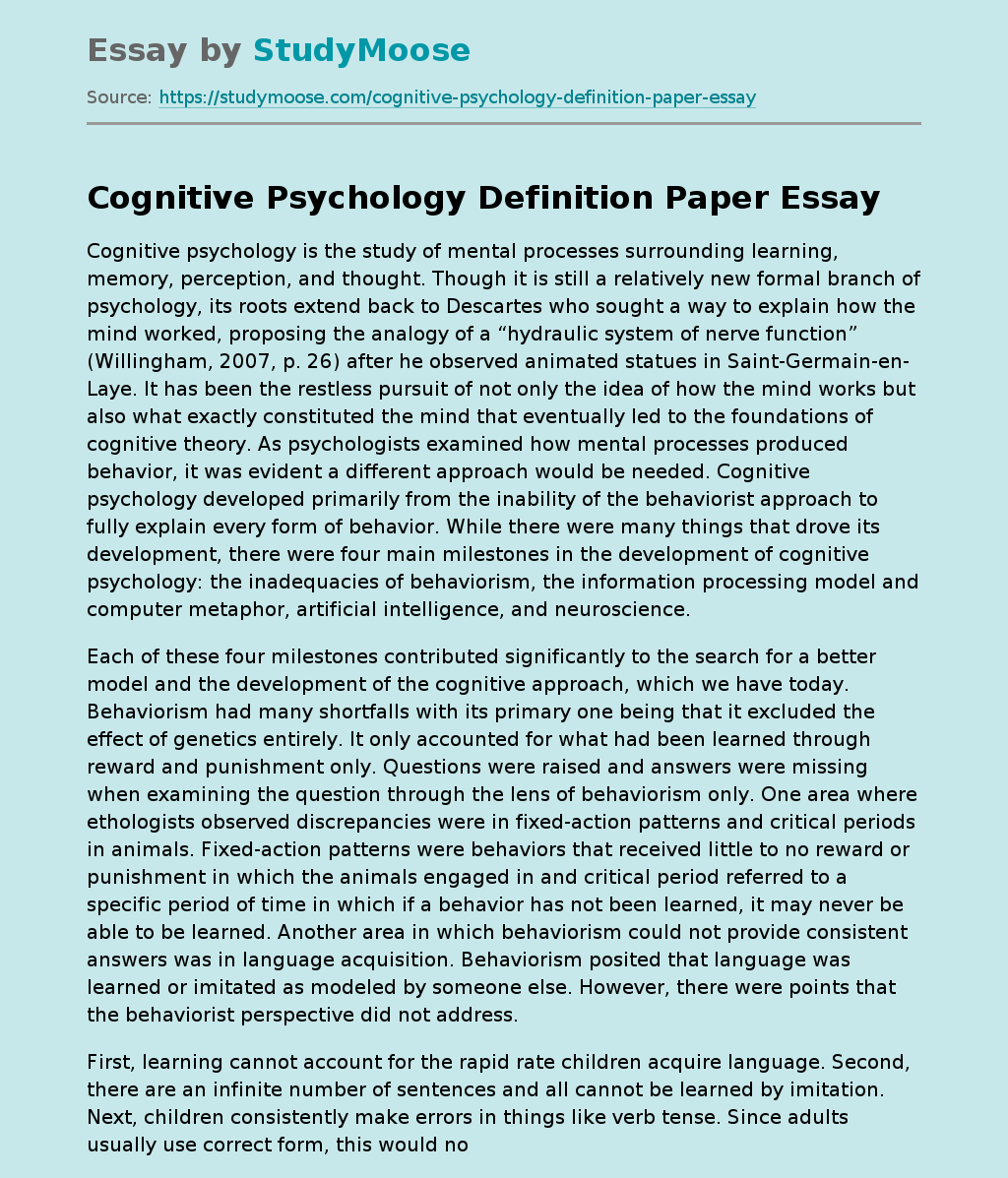