Theoretical and Applied/Practical Perspective of False Memory The human memory is subject to a multitude of errors, including source misattributions, distortion and creation of false memories. In order to do justice to this paper one must first determine what is “False memory”? False memory is memory for an event that did not occur or distorted memory of actual events (Gleaves, Smith, Butler, & Spiegel, 2004). This type of memory has been an area of intense research interest for both theoretical and practical reasons and psychologists have long been interested in memory illusions and distortions, as such errors can inform theories of how the memory works (Hunt & Ellis, 2004).

From a theoretical perspective, false memories have been the subject of intense debates about the nature of human memory and a focal point for old and new memory theories. Memories are not simply stored and retrieved, information is encoded and memories are reconstructed using previous knowledge to piece together the situation as one thinks it occurred (Loftus & Ketchan, 1994).

Therefore perception and comprehension of ongoing events always brings related information to mind. For example, an individual mentions that he/she had a great trip to the beach over the weekend. In comprehending what the individual is saying; one may imagine their last visit to Miami Beach. Later one remembers that the said individual mentioned his/her visit to Miami Beach when, in fact, the individual said nothing about which beach he/she visited. This example illustrates how frequently one might remember information related to ones ongoing perception and comprehension, even though the events represented by that information never occurred (Hunt & Ellis, 2004). One of the most common ways that false memories have been studied is through the Deese-Roediger-McDermott (DRM) effect. This list learning paradigm provided a traceable means by which false memories can be created and studied in the laboratory.

Gallo, McDermott, Percer & Roediger III (2001) explained that the DRM paradigm was a method of using converging semantic associates to induce false memories. It basically referred to the high confidence false recall or recognition of the critical lure. Within the study subjects were given a list of words for immediate free recall. These words were all associated semantically with a critical lure which itself was not presented. For example, if the critical lure was sleep the list would have consisted of fifteen words most highly associated with sleep such as bed to the least highly associated which would be drowsy on free association norms. Even though the critical lure was not on the list, subjects often falsely reported it and on recognition tests, these individuals often “remember” these words with a high degree of confidence (Surgrue & Hayne, 2006).

False memories arising from phonologically associated lists may indeed be enhanced by phonological encoding in comparison with semantic encoding. False memories therefore can be elicited by presenting lists of phonologically related words in both recognition and recall tasks (Chan, McDermott, Watson & Gallo, 2005). According to the fuzzy traced theory (as cited in Howe, 2008), subjects encode both verbatim information about the experience to gist information about the experience. Applied to the DRM paradigm gist information represents the semantic commonalities among lure’s studied associates, which lead the fuzzy trace theory to propose that lure errors are familiarity based (Arndt, 2010). Memory errors to unstudied items arise from how well they match gist traces and that memory errors are limited by the extent to which unstudied items produce retrieval of verbatim traces. Therefore lure errors increase when they match the gists representation of their studied associates but decrease when retrieval is inspired of the verbatim traces of their studied associates (Howe, 2008).

Once the gist representation is reasonably strong it can produce an illusory subjective experience of its actual presentation, this is known as phantom recollection (Gallo, McDermott, Percer & Roediger III, 2001). When this phenomenon occurs an individual may confuse the gist trace strength with the psychological experience of recollecting, which is normally mediated by retrieving verbatim traces of studied items. As lure items tend to match very strong gist traces in memory individuals believe they can recollect DRM lures. According to Arndt, (2010), “this theory proposes that although these errors are often phenomenologically similar to items that were episodically experienced, lures’ recollection phenomenology is representationally distinct from that of study items” (p.67). There is evidence however that false memory can be based largely on automatic processing and is amenable to only limited conscious control.

For example, Dodd and MacLeod (2004), showed that mere exposure to DRM lists was sufficient to create a false memory: They presented DRM lists as coloured words in a Stroop test. Naming colours reduced accurate memory for list words as compared to reading coloured words, but false memory remained high for critical words. Furthermore, the elimination of false memory is difficult in that certain “encoding manipulations may lead to reductions in false memories through metamemorial processes occurring at retrieval” (Gallo, McDermott, Percer & Roediger III, 2001, p.339). For example slowing presentation rate decreases the probability of false remembering, but may not eliminate it (Gallo, McDermott, Percer & Roediger III, 2001). False memories are remarkably persistent. For example, Toglia, Neuschatz and Goodwin (1999) found that false recall rates remained high over a three-week period, whereas recall of studied words revealed the typical decrement.

In short, the DRM paradigm allows for the easy and reliable elicitation of false memories in the laboratory. From a practical perspective, false memories are a threat to the validity of eyewitness testimony, a misleading source of autobiographical information in psychotherapy, and a biased representation of lessons taught in educational settings. For this assignment the validity of eyewitness testimony only, will be discussed (Hunt & Ellis, 2004). According to Greene (as cited in Loftus, 1995, p.720), “memories do not exist in a vacuum. Rather, they continually disrupt each other through a mechanism that we call “interference”. For instance, memories can be disrupted by things that an individual experienced earlier, this is known as proactive interference or situations that one may experience later, which is known as retroactive interference. Based on the interference theory from a retroactive interference perspective, when new information is received that is misleading in some ways individuals make errors when they report what they saw.

The reason for this is that new information often becomes incorporated into the recollection, supplementing or altering it in a significant way (Porter, Bellhouse, McDougall, Brinke & Wilson, 2010). Elizabeth Loftus (as cited in Hunt & Ellis, 2004), pioneered laboratory research modeled on eyewitness situation demonstrating the intervening events that occur between witnessing an event and subsequent testimony in court. The paradigm for this research was simple, participants witnesses a simulated violent crime of an automobile accident half of the participants received new misleading information about the event and the other half did not received any misinformation. The participants in this experiment were influenced by presuppositions invoked by the verbs smashed and hit based on the question asked, which was “About how fast the car was going when they hit, smashed each other ”. Smashed presupposes a more violent collision a fact that influences both estimates of speed and amount of damage.

Therefore individuals who stated that there was broken glass saw the word “smashed”, but no broken glass was actually depicted in the film. The presupposition dramatically, but subtly influenced memory for the actual event (Loftus, 1995). What was being remembered was the integrated memory of the two events, memory for the original film, plus memory for the additional information that was inherent in the question asked later. As the two memories blended over time the end result would be a single blended memory that is a distortion of the original event (Hunt & Ellis, 2004). Higham (1998), showed that the latency between exposure to misinformation and time recall also influenced the misinformation effect, such that recent exposure to recent information was associated with greater recall of false details. Therefore both the response bias and memory change accounts have important implications for how one might regard the reliability of eyewitness testimony.

According to Loftus & Pickrell (1995), false memories can be implanted as was demonstrated in the “Lost-in-a-shopping-mall” study. It suggested that memory of an entire mildly traumatic event can be created and that further questions may be asked, such as, is it possible to implant a memory of abuse. For example one of the most dramatic cases of false memory of abuse ever to be documented was the case of Paul Ingram from Olympia, Washington (Ofshe, 1992; Watters, 1991). This individual was arrested for child abuse in 1988 at the time he was chair of the county Republican committee. From the outset he denied everything, but after five months of interrogation, suggestions from a psychologist and continuing pressure from detectives and advisors, Ingram began to confess to rapes, assaults, child sexual abuse, and participation in a Satan-worshiping cult alleged to have murdered 25 babies (Loftus, 1993).

Ofshe (1989) noted that this was not the first time that a vulnerable individual had been made to believe that he had committed a crime for which he originally had no memory and which evidence proved he could not have committed. What is crucial about the Ingram case is that some of the same methods that are used in repressed memory cases were used with Ingram. This case also provides further insights into the malleable nature of memory. They suggest that memories for personally traumatic events can be altered by new experiences. Moreover, they reveal that entire events that never happened can be injected into memory. Therefore false memories range from the relatively trivial (e.g., remembering voting) to the bizarre (e.g., remembering forcing one’s daughter and son to have sex) (Loftus, 1993). These false memories, with more or less detail, of course, do not prove that repressed memories of abuse that return are false.

They do demonstrate a mechanism by which false memories can be created, by a small suggestion from a trusted family member, by hearing someone lie, by suggestion from a psychologist, or by incorporation of the experiences of others into one’s own autobiography planted (Loftus, 1993). Although false memories of ones childhood can be implanted, it does not imply that all memories that arise after suggestion are necessarily false, although the experimental work on false memory creation raises doubt about the validity of long buried memories such as repeated trauma, but it in no way disproves them. Even with the most experienced evaluator, it is difficult to differentiate true memories from ones that are suggestively planted (Loftus, 1997).

True memories represent events as they really occurred, whereas false memories shade, distort or entirely misrepresent events as they really happened. Research on memory distortion indicates that memory is not at all like a mechanical recording device. The original experience is not stored as some veridical trace of what was out there but, rather, is the result of interpretive processes of perception and comprehension. The intriguing picture of memory that emerges is one of a powerful, adaptively important and usually reliable psychological process that sometimes is completely wrong (Hunt & Ellis, 2004). 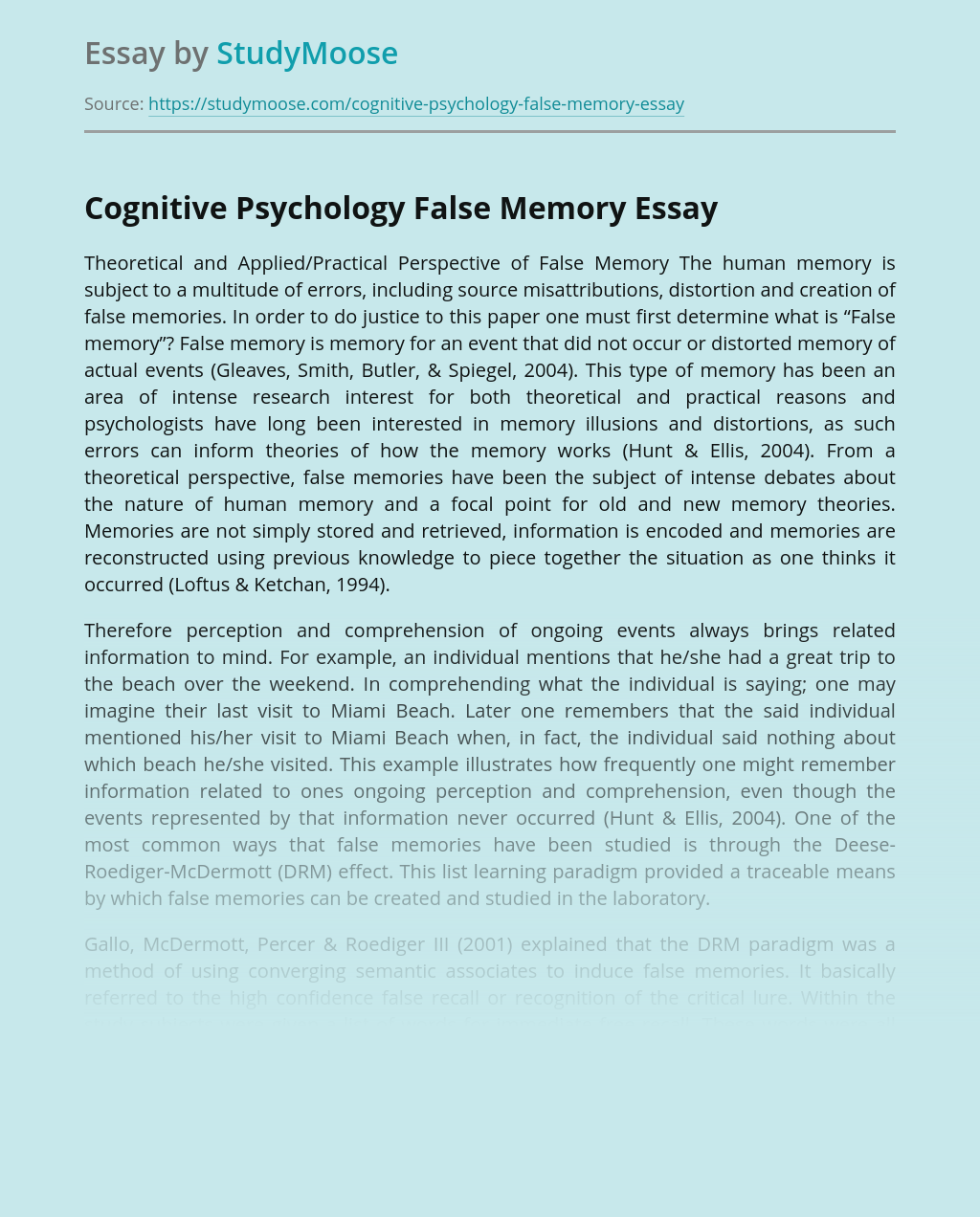