Piaget has been described as the father of cognitive psychology (Shaffer, 1988) and his stage theory as the foundation of developmental cognitive psychology (Lutz & Sternberg, 2002). It is not possible to describe Piaget’s empirical findings and theory in only 1,500 words. Instead, I will briefly review the theory’s scope, comprehensiveness, parsimony, applicability, heuristic value and methodological underpinning. I will then evaluate in more detail the theory’s utility in describing and explaining cognitive development.

Historically, Piaget’s ontological approach was ground-breaking with its focus on the qualitative nature of cognition and its constructivist perspective.

Turn in your highest-quality paper
Get a qualified writer to help you with
“ Critically evaluate piaget’s theory of cognitive development ”
Get high-quality paper
NEW! AI matching with writer

The theory itself is wide-scoped (universal), comprehensive (covering a broad spectrum of cognitive achievement) and elegantly coherent (from neonate to adult). It remains profoundly influential on cognitive psychology and continues to be widely applied in childcare and educational settings. Piaget’s theory is parsimonious in its commonality of approach to a broad range of complex phenomena with key interlinking concepts. Inevitably, such an ambitious theory has generated a wealth of research, some supporting, some supplementing, some extending and some disputing aspects of Piaget’s theory.

Some of the weaker aspects of Piaget’s theory appear to arise from his ‘clinical method’ of using observational behavioural data to infer conclusions about children’s underlying cognitive competences. Longitudinal data, ideally suited to monitoring progression, was only recorded for his own three children. Certain of his techniques were insufficiently sensitive to identify the underlying causes of performance variations, especially with very young infants, where more recent habituation techniques have shown that Piaget considerably underestimated their understanding and ability (Bower, 1982, Baillargeon & DeVos, 1991).

This may have led him to overlook other relevant explanations for varying levels of performance, eg limitations on memory capacity (Bryant & Trabasso, 1971, Kail, 1984, Diamond, 1985), motor-co-ordination (Mandler, 1990), availability of memory strategies
(Siegler, 1991) and verbal understanding (Sternberg, 1985). However, Piaget’s clinical method, his flexible and ecologically valid approach did reveal original insights into children’s thinking, which a more standardised, ‘scientific’ approach may have overlooked entirely.

Piaget’s theoretical framework describes the structure of cognitive development as a fixed sequence of four discontinuous and qualitatively different ‘periods’ (for ease of understanding, referred to as stages) of all children’s intelligence across domains, tasks and contexts.

Invariance is a core feature of Piaget’s conceptual structure, in contrast with contemporary perspectives, which question rigid conceptual structures, eg post-modernism and chaos theory. Piaget emphasised the invariance of progression through stages, so that a child never regresses to thinking methods from an earlier stage of cognitive development. This is empirically unconvincing, eg, as an adult, I have easily switched from formal-operational to concrete-operational thinking when presented with flat-pack furniture and an incomprehensible set of instructions. Research (Beilin, 1971, Case, 1992) has also contradicted the assumption that within a given stage of development, children demonstrate only stage-appropriate levels of performance, eg 4-year-olds make the same mistakes as 1-year-olds on some hidden-object problems by looking at locations where they have found the object previously (Siegler, 1998).

Structural, qualitative discontinuity between stages – a key feature in the theory’s description of cognitive development – is also questionable. Although much research has shown that children can do things at ages earlier than Piaget considered possible (Baillargeon, 1987, Mandler, 1998, Diamond, 1991), Piaget focussed on the sequence of progression from one stage to another rather than the respective ages of cognitive achievement. However, because cognitive achievements have often been shown to emerge earlier (and occasionally later if at all, eg certain formal operations) than Piaget’s stages indicate, exactly when these stages begin and end cannot be clearly established. This blurring of boundaries between stages, suggests a spiralling structure of gradual, continuous cognitive development rather than a stepped structure of discontinuous stages.

Piaget’s focus on competence as opposed to performance contributes to the difficulty of determining when one stage becomes qualitatively different from another. What we may be capable of doing optimally (competence) may often differ from what we do actually much of the time (performance) (Davidson & Sternberg, 1985). Even if we accept Piaget’s stages as distinguishing when competences are fully developed and functional not necessarily when they first appear (Lutz & Sternberg, 2002), there is still insufficient evidence that qualitative leaps in cognitive competence can be distinguished between one stage and another. Indeed, Piaget (1970) adjusted his position on the discontinuity of stages, acknowledging that transition from concrete-operational to formal-operational reasoning occurs gradually over a span of several years.

Siegler (1998) suggests that catastrophe theory (a mathematical theory which examines sudden changes) explains both the continuous and discontinuous appearance of cognitive development. The forces that lead to the collapse of a bridge may build up over a period of years, however the bridge’s visible collapse appears as a sudden event. Analogously, a child may suddenly solve a problem that she could not solve the day before, but her progress may be due to experience and improved understanding acquired over preceding months. Thus cognitive development may be viewed both as a continuous process of small, imperceptible amendments or as a discontinuous shift from one state to another – depending on when and how closely viewpoints are taken. Bloom (2002) provides a similar argument in refutation of ‘spurts’ in word learning.

Piaget initially argued that his stages are universal, ie that they apply to everyone irrespective of their individual experience. Recent research suggests that cultural practices are related to children’s proficiency on tasks (Rogoff, 1990). Piaget (1972) always acknowledged the impact of social and cultural contextual factors on cognitive development but came to revise his claim that his stages are universal, eg by recognising that achieving formal operations is dependent on exposure to the specific type of thinking found in science classes and on individual motivation to undertake certain types of task.

Piaget’s revised stance on universality and the discontinuity of stages also calls into question the theory’s implicit structural premise of cognitive development being domain-general. Piaget refers to stages as holistic structures, with coherent modes of thinking that apply across a broad range of tasks, ie are domain-general. However children do not appear to develop consistently and evenly across all cognitive tasks or even within specific types of cognitive functioning, eg conservation. Piaget explains unevenness of progression, eg, within the domain of conservation, mass is conserved much sooner than volume, by ‘horizontal decalage’, which occurs when problems that appear quite similar in the requirements of underlying knowledge actually differ in the complexity of schemata required. An alternative explanation for perceived unevenness in cognitive development is domain-specificity, ie that specific types of cognitive processing develop separately and at differing rates from others.

One example of domain-specificity for language vs number acquisition occurs in deaf infant’s symbolic-representational ability allowing them to learn American Sign Language as early as 6-7 months, while children’s symbolic-representational ability for number appears months later (Mandler, 1990, Meier & Newport, 1990). Subsequent research (Chomsky, 1986, Fodor, 1983, Chi, 1992 cited in Pine, 1999) has suggested domain-specificity for language, mathematics and logico-spatial reasoning involved in chess! Horizontal decalage is described, at best, as a peripheral element and, at worst, as undermining the theory’s holistic stage structure and domain-generality.

To summarise the descriptive utility of Piaget’s theory, it certainly describes the general sequencing of children’s broad intellectual development, although stage-like discontinuity may be a reflection of perspective only. However, the theory appears less accurate in its description of cognitive development as universal, functionally invariant and domain-general. More recent research (Fischer, 1980, Flavell, 1985) suggests that cognitive development occurs gradually and sequentially within
particular intellectual domains.

Turning to the theory’s explanation of cognitive development, Piaget’s theory explains cognitive development as the result of physical maturation and two basic biological, invariant functions: organisation and adaptation (Lutz & Sternberg, 2002). Organisation is seen as the tendency to organise physical and psychological processes into purposeful, efficient systems. Adaptation occurs via equilibration, namely the seesaw-like balancing of (1) assimilation, ie how children transform incoming information to fit their existing modes of thinking (‘schemata’) and (2) accommodation, ie how children adapt their schemata in response to new experiences. Equilibration integrates physical maturation, experience with the environment and social influences (Miller, 2002).

Whilst Piaget’s focus on the active constructivist mechanism of individual/environmental interaction has been highly influential, it does not provide a sufficient explanation of cognitive development. There is little explanation of the physical maturational aspects that are key to cognitive development, such as that provided by subsequent researchers on age-related neural processing improvements (Diamond,1991). More importantly, the processes of adaptation and organisation do not explain how a child’s logical ability is derived from interaction with the environment, eg there is no explanation of how sensorimotor activity is transformed into mental images which are in turn transformed into words. Crucially, Piaget’s theory does not provide any explanation of the mechanism of cognitive transition from one qualitative stage to another.

Nonetheless, Siegler (1998) describes Piaget’s work as ‘a testimony to how much one person can do’. The theory’s heuristic power is undeniable: recent studies of cognitive development have focussed on previously unsuspected cognitive strengths in children and on a broader range of children’s thinking than that investigated by Piaget (Kohlberg, 1984). The theory’s longevity is certainly warranted for its originality and inspiration to others. According to Piaget “the principal goal of education is to create adults who are capable of doing new things, not simply of repeating what other generations have done – who are creative, inventive, discoverers” (Piaget, 1977 cited in Shaffer, 1998). By this standard, Piaget and his theory of cognitive development must be judged a success for current cognitive psychology.

Chi, M.T.H. (1992). Conceptual change within and across ontological categories: Examples from learning and discovery in science. In R.Giere (Ed.) Cognitive Models of Science: Minnesota studies in the philosophy of science. Minneapolis:University of Minnesota Press

Chomsky, N. (1986). Knowledge of language: Its nature, origins and use. New York: Praeger

Fischer, K.W. (1980). A theory of cognitive development: the control and construction of hierarchies of skills. Psychological Review, 87, 477-531

Piaget, J. (1977). The role of action in the development of thinking. In W.F. Overton & J.M. Gallagher (Eds.) Knowledge and development (Vol 1). New York:Plenum 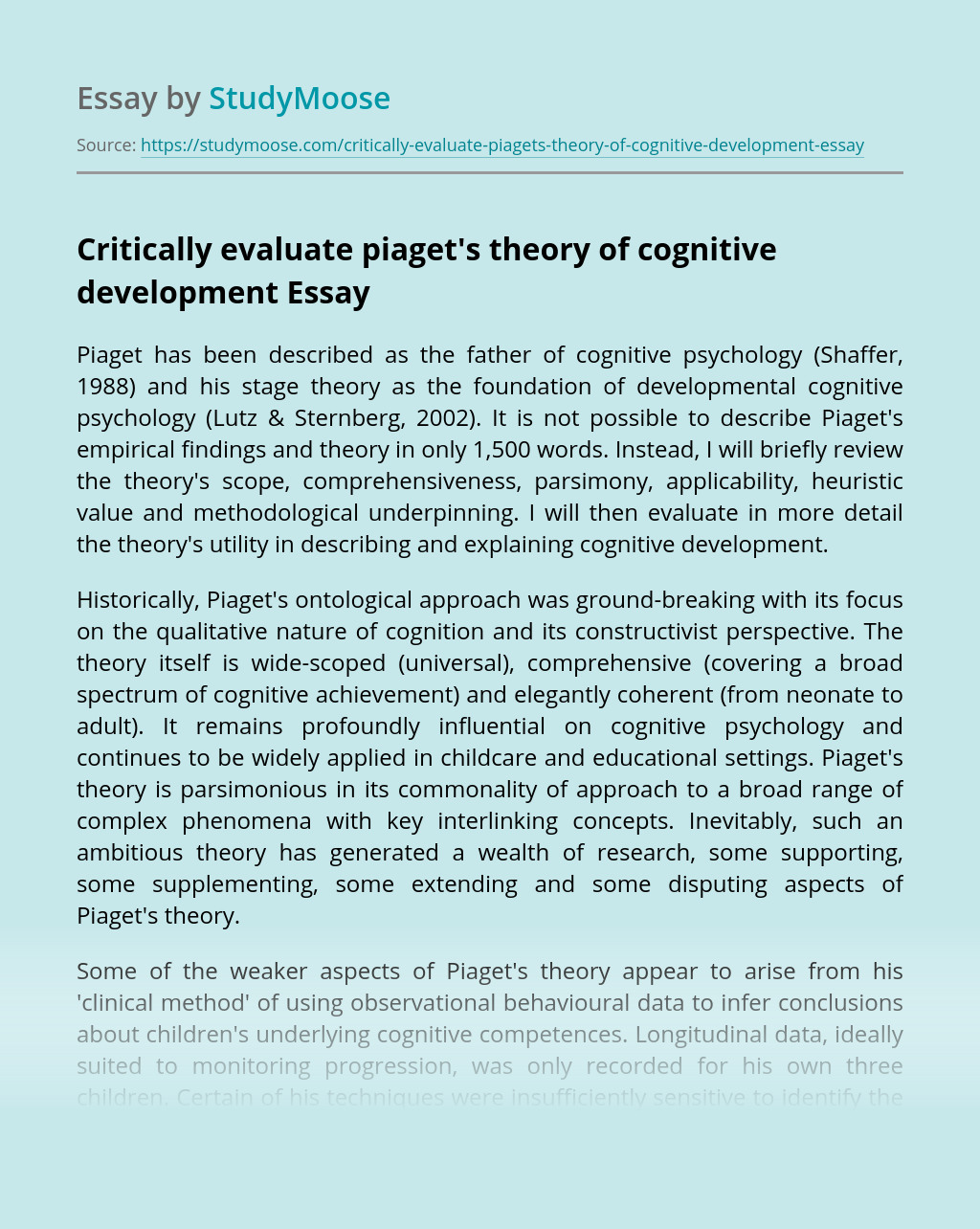 Turn in your highest-quality paper
Get a qualified writer to help you with
“ Critically evaluate piaget’s theory of cognitive development ”
Get high-quality paper
Helping students since 2015
Stay Safe, Stay Original