Critically evaluate Samuel Huntington's claims in "The Clash of Civilizations?"

The abrupt end of the Cold War meant that the bipolar model of thinking which had dominated the sphere of World Politics for decades became obsolete. This new phase led to a renewal in thinking in the study of International Relations dubbed “the hundred schools of thought” which led to a wide spectrum of visions about the uncertain future of world affairs. One of the more prominent visions was the late Professor Samuel Huntington’s “Clash of Civilizations?

” published in a 1993 Foreign Affairs article, where he predicted a growing pattern of conflict based on differences in cultural, religious and historical identity of entities he labelled civilizations instead of the ideological differences of the Cold War Era.

Don't use plagiarized sources. Get your custom essay on
“ Critically evaluate Samuel Huntington’s claims in “The Clash of Civilizations?” ”
Get custom paper
NEW! smart matching with writer

Huntington’s thesis was a Realist response to Fukuyama’s 1992 book, The End of History and the Last Man. Fukuyama argued that the post-1991 world was left with no viable ideological alternative to liberal democracy and the free market economy predicting a new era of global consensus on democracy, justice, human rights and cooperation.

‘The nation will continue to be a central pole of identification, even if more and more nations come to share common economic and political forms of organization. ‘i Huntington’s premise was that ‘The great divisions among humankind and the dominating source of conflict will be cultural. Nation states will remain as the most powerful actors in world affairs but the principal conflicts of global politics will occur between nations and groups of different civilizations.

‘ii The controversial nature of Huntington’s thesis ensured the stern critique by some of his fellow academics for reasons including oversimplification, neglecting contradicting factors and inaccurate predictions.

The tragedy of 9/11 and the events that followed revived the confidence in his thesis by his supporters who saw this as the conformation of Huntington’s predictions notably the inconsolable clash between Islam and the West.

Huntington begins by describing the historical evolution of the nature of conflicts in the Western World; from the competition between monarchs and emperors for territorial and mercantile expansion leading to the emergence of nation states beginning with the French Revolution, to the rise of ideological conflict after the Bolshevik Revolutioniii. His Eurocentric bias is clear early as he quotes and perpetuates an idea put forward before by William Lind that these were primarily ‘Western Civil Wars’.

Labelling World War II, the deadliest military conflict in history which involved the majority of the world’s nations, as such greatly diminishes the involvement and sacrifices made by people across the world. Notably the Soviet Union which was mainly composed of nations Huntington would regard as part of a Slavic-Orthodox civilization sustained the highest amount of casualties totalling at around twenty-seven millioniv.

Later in the paragraph, Huntington writes ‘peoples and governments of non-Western civilizations no longer remain the objects of history as targets of Western colonialism but join the West as movers of history’ as if to suggest that events occurring in non-western parts of the world somehow do not constitute as history if they don’t involve or have a felt effect upon Western society.

Although the leadership of the West in fields such as science, technology and engineering for the larger part in recent centuries is indisputable; Jewish philosophy, Hindu mathematics, Muslim astronomy and engineering contributed significantly to the foundations of what we know today and this shouldn’t be undermined. The sharing and borrowing of ideas between the different corners of the world through the millennia’s that’s still going on today suggests a long-term cooperation instead of a clash of civilizations in our common pursuit of knowledge.

According to Huntington a civilization is ‘ the highest cultural grouping of people and the broadest level of cultural identity’v. He divides the world’s population into seven civilizations as well as hinting at the possibility of a Caribbean and an African civilization; Africa being indeed a continent known for its vast diversity of cultures and traditionsvi. He defines a civilization by what he calls objective elements such as language, history and primarily religion as well as by the subjective self-identification of people.

Huntington argues the onset of globalization has led to increased levels of interaction between peoples of different civilizations, which in turn intensifies civilization consciousness and brings to the forefront their cultural differences which unlike ideological and political differences are fundamental and much less mutable and hence less easily compromised. It’s clear that people instinctively identify themselves closely to others who share common traditions, customs and history; I hold the belief however that Huntington downplays the penetration of globalization and focuses on one aspect of its possible consequences.

It’s not the differences that drive cultural conflict between peoples; it’s the lack of understanding which in turn creates prejudices and fears. The increased interactions between peoples have led to a wider acceptance of and fascination with other cultures, helping us understand why foreign societies live the way they do. Huntington argues: ‘…Russians cannot become Estonians and Azeri’s cannot become Armenian’vii. An Estonian living in Russia will absorb aspects of Russian culture depending on one’s willingness, length of stay and the extent to which one feels alienated or accepted by Russian society.

Thus the objective elements invoked are not convincingly definitive in determining one’s identity; an Englishman may choose to convert to Islam while a Chinese citizen in Shanghai may choose to learn French as a pastime. Globalization in itself has penetrated the long-standing limitations in global trade of the past; politicians ever increasingly have to consider the global implications of domestic policy. More than ever national states around the world are dependent upon each other; the United States Demands Chinese goods while China needs the US to buy its goods.

Huntington ascribes ideas such as constitutionalism, human rights, the rule of law, free markets and democracy as Western; unable to gain a foothold in other civilizations. He writes: ‘Modern democratic government originated in the West. When it has developed in non-western societies it has usually been the product of the western colonialism or imposition’viii. suggesting that somehow peoples of other civilizations may not be able to sustain or see the benefits of a form of democratic governance.

The people of India would point out that democratic government was formed in their country despite, not because of the Westix. Today more than two-thirds of the world’s governments operate in some form of democracy, which reaffirms the idea that democracy is a universal value, contradicting Huntington’s view of its general Western exclusivity. If asked, most Middle-Easterners would prefer the idea of a democratic to authoritarian governancex; the limitation of democratic development in the region however is a product of the unstable and incompatible political landscape rather than the irreconcilability of the culture.

Defining the religious aspects of the Western Civilization, Huntington justifies the grouping of Protestant and Catholic Christians into a single entity by emphasizing shared experiences in European history such as the Renaissance, the Enlightenment and the Industrial Revolution which in turn separates them from the Orthodox Christians beyond Central Europexi. Although it is evident that the closer proximity of those events has influenced Protestants and Catholics more than their Orthodox counterparts, the closer resemblance of Catholic and Orthodox practices and beliefs as opposed to Protestants is however neglected.

Huntington consistently appeals to religion as the primary source of cultural identity, rightly so, to a Christian the creeds of their religion have a profound influence on their world view and thus how they would identify themselves. When speaking of the Islamic civilization however, Huntington doesn’t seem to make the effort to differentiate between the major denominations of Shia, Sunni and Sufism which have so strongly influenced the historical and especially current political landscape of the Middle-East.

In a passionate attempt to warn his fellow Americans of the potential threats that their country may face in the post-Cold War environment, Huntington essentially perpetuated ideas that were dangerous and self-fulfilling. The existence of a Confucian-Islamic connection that may threaten the West described by Huntingtonxii is yet to be empirically verified, as the Chinese and US economies remain inter-linked and Barrack Obama moves towards a policy of dialogue in the Middle-East. Given the history of US foreign policy, legislators would have found Huntington’s paradigm easy to understand and convenient in terms of implementation.

A worldview of distrust towards foreign powers that demands the maintaining of military superiority in the name of security panders to the powerful military industrial complex in the US. In order to maintain peace, global stability and have any hopes of dealing with transnational issues such as global warming, policy makers should regard all nations as members of the world community and work closer with international organizations such as the UN and WTO in establishing universal laws. The alienation and coercion of other governments will indeed create an atmosphere of antagonism and hostility. 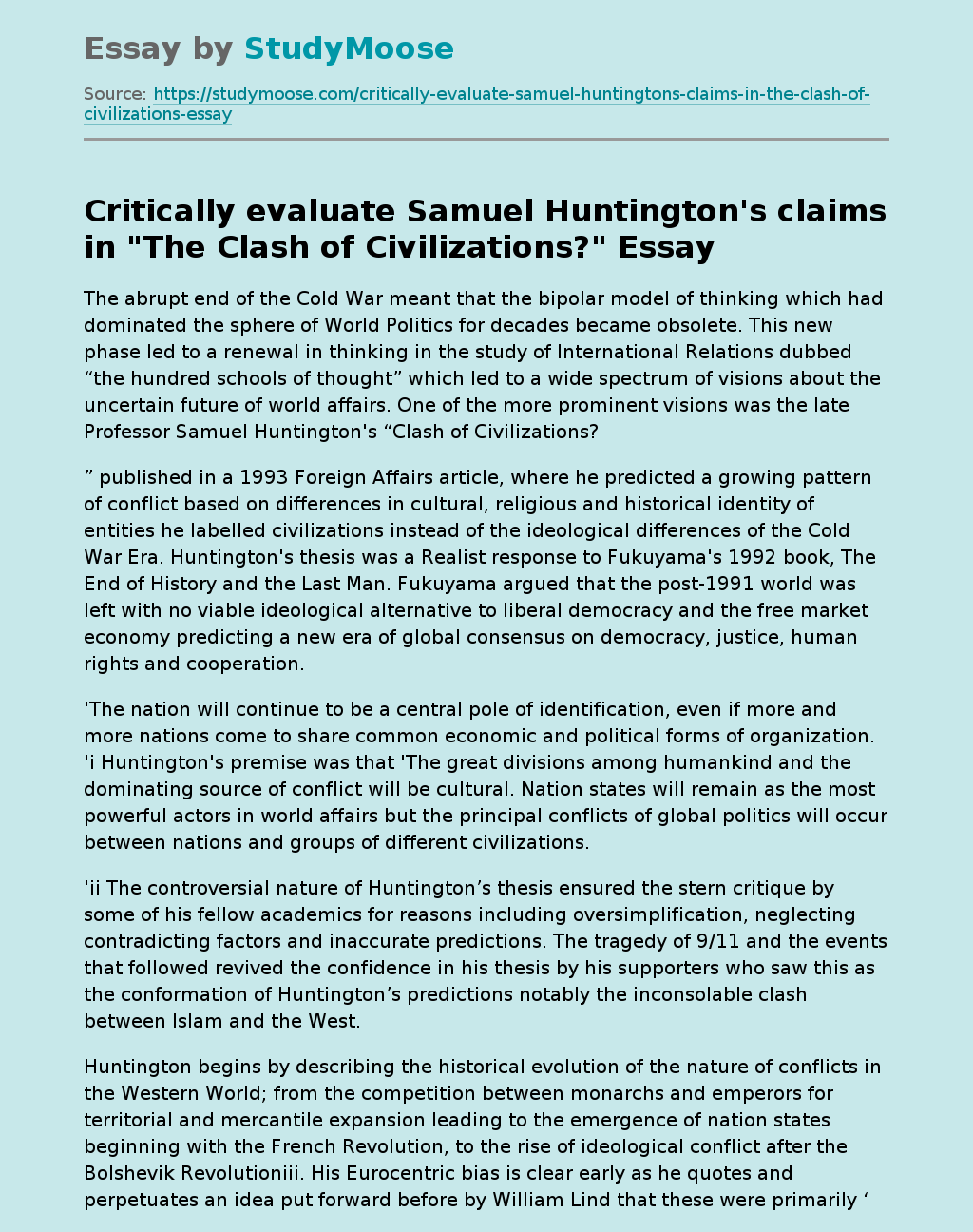