Huntington disease is a form of an inherited neurodegenerative disorder. The disease appears following a mutation of one of a person’s two copies of a Huntingtin gene which is autosomal. This gene is normally found in all individuals and its function is to code for a protein which is known as huntingtin. Following the mutation of this gene, a different type of protein is formed and this protein gradually destroys some of the brain parts leading to their death (Huntington Society of Canada [HSC] 16).

Don't use plagiarized sources. Get your custom essay on
“ Huntington’s Disease ”
Get custom paper
NEW! smart matching with writer

The affected parts include putamen, caudate as well as the cerebral cortex though this comes as the disease progresses.

How an individual gets exactly affected by this disease varies between individuals but generally all individuals exhibit similar symptoms.

These symptoms are classified into three: emotional, physical, and cognitive symptoms and they usually vary depending on the stage of the disease (HCS 8). The stages are classified into three with the first stage being the early stage which is characterized by subtle changes in cognitive ability. In this stage, individuals who are affected experience difficulty in remembering information, in coping with unfamiliar situations as well as in coordinating routine matters (HCS 8).

This makes the affected individuals forgetful and unable to be attentive to details.

The emotional symptoms associated with this stage are also not well pronounced and include depression and irritability (HCS 8). The physical changes seen at this stage include involuntary movements which are exhibited in form of fidgeting and a lot of restlessness, and difficulty in tasks that the individual has been doing routinely such as writing (HCS 9). The next stage is known as the intermediate stage and this is associated with obvious exhibition of involuntary movements. For instance jerking of neck or limbs. This interferes with activities such as swallowing, speaking and walking making the individuals to appear drunk (HCS 10).

The last stage is the advanced stage and this is usually characterized by rigidity and reduced involuntary movements. At this point the individuals cannot do the normal daily activities and they experience difficulties in communication and swallowing and in most cases the individuals have lost weight (HCS 10). It is important to note that the symptoms exhibited by children are difficult to diagnose as they differ from those exhibited by adults (HCS 20). Currently there is no cure for the disease but research is ongoing. The search for this disease’s cure is focused on genetic research.

Following the discovery of the Huntington gene, a lot of research has been carried out (Miller). The gene has a section that is responsible for glutamine encoding. This code has its base pairs in a series of CAG repeats which is cytosine, adenine and guanine respectively. In Huntington’s disease, these repeats are mutated in such a way that they appear in abnormal numbers. In development of treatment, expression of the gene is targeted with promising drugs being those that target antisense and RNA interference (Miller).

Addition of another normal gene in individuals have been considered to increase the amount of normal protein coded for but the problem with this approach is that the abnormal proteins produced will still be detrimental to the brain (Miller). A common problem in the search for genetic intervention lies in the presence of the normal gene which should not be interfered with. This problem limits application of RNA interference method as it involves silencing of both the mutated and normal genes though research has shown the possibility of silencing only the mutated gene using an approach that is allele specific (Miller).

For most of the cases found in the world, their origin is usually traced to western countries and it is believed to have spread through immigration (HOPES). The difference in prevalence rates among different populations is attributed to variations in genetic risk factors. For people whose family members have had Huntington’s disease, they can take a genetic test to determine if they are at risk. However, many people would not rather take the test because of the consequences.

To begin with, insurance companies consider covering such people too risky and have been charging high premiums for people with such cases or deny them cover altogether (Boughman 1). Another thing is that some employers have been discriminating against their employees and potential employees who have this problem (Boughman 1). But this problem has been solved by passing of the Genetic Information Nondiscrimination Act which prohibits discrimination on the basis of an individual’s genetic information (Boughman 1).

Other social problems involve marriage stability after diagnosis due to the fact that the children could also be affected as well as change of roles (HCS 26). From the above discussion it is clear that Huntington’s disease though rare, it has been causing concerns among social and medical fraternity. This is important as the social concerns have led to implementation of the Act against discrimination and this will in turn help the medical researchers who will be able to get more participants in their projects and this increases hopes of getting a cure. 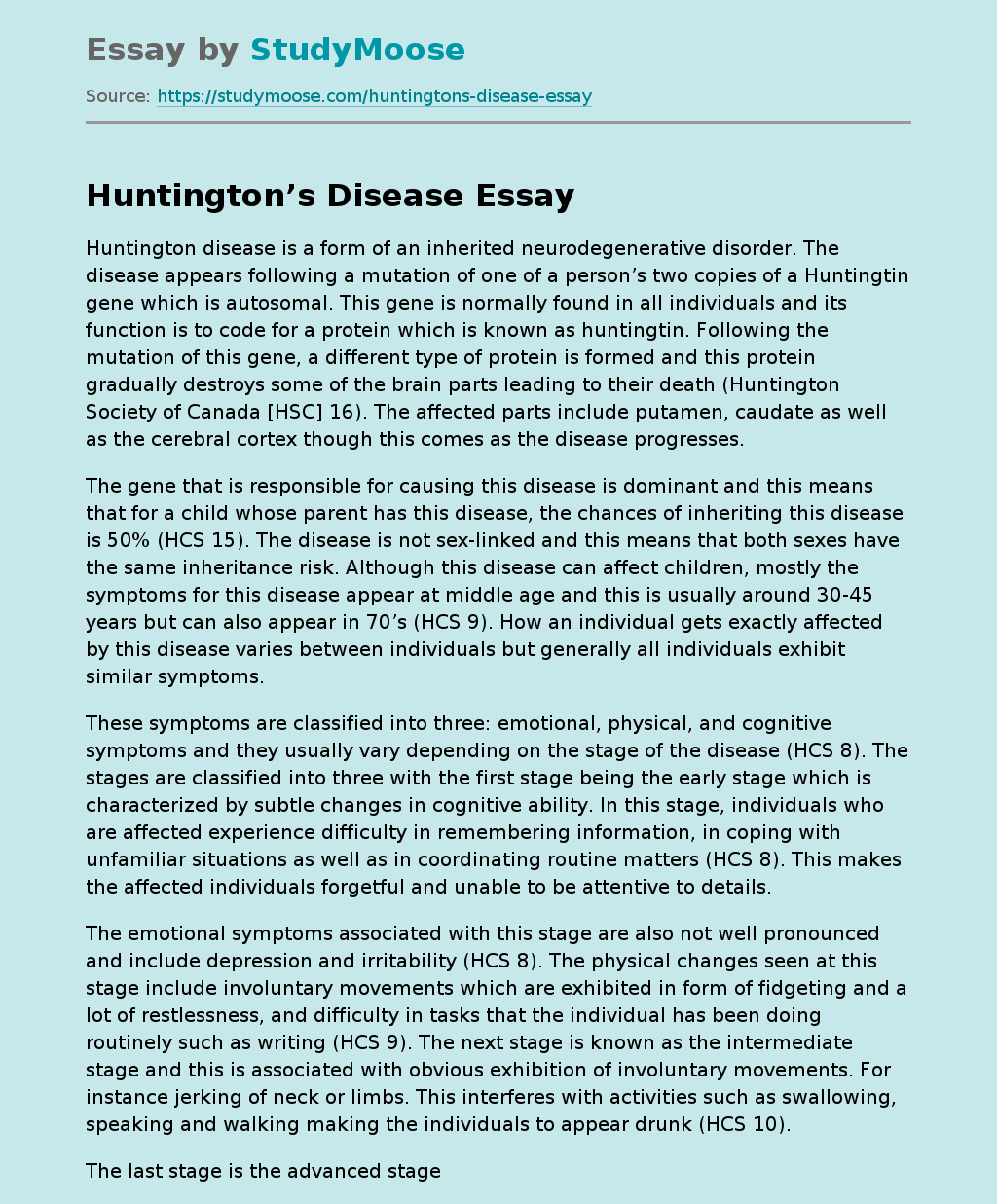