Social issues have been present since the early days of Adam and Eve. They have never stopped multiplying and are facing actually an exponential worsening. Solving them all at once would be surely the hardest goal to achieve; however, facing each issue separately would be the best solution. Social issues have become countless, complex, and are featuring actually over a million topics; most of them being kept taboo. One of the most talked about taboo these days is actually the oldest profession ever exercised by humans: Prostitution.

Don't use plagiarized sources.
Get Your Custom Essay on Causes of Prostitution Just from $13,9/Page

As we all know, prostitution is a sexual activity in exchange for financial gain being either a willing practice or a forced one. It has been expanding over the years with the goal of acquiring legalization all over the world. The effects of prostitution on the society are severely harmful justifying the need to abolish it. Therefore, in order to facilitate the vanishing of this uncontrollable practice, the causes leading to its expansion should be deducted and exposed clearly.

Prostitution has many identifiable causes that are related either to the mentality, to the economic situation or to the social environment of the prostitute.

First of all, one of the main factors leading to prostitution is psychological since the tendency towards it is found only in a minor section of the population. Actually, sexual aggression is an incident whose frequency is increasing over time and leading to the expansion of prostitution. In fact, O’Neill (2001) argues that many adolescent girls have suffered from physical violence and repulsive male submission either from a stranger or from an acquaintance; and that this has pushed them into prostitution with the intention of regaining trust and confidence (pp.91-93). Moreover, Crowley’s research reveals that 85% of young prostitutes testify the absence of their father and/or their mother throughout their childhood (Flowers, 1998, p.83). As a result, they have been victims of a substantial lack of care and affection; one which they hope to compensate for through prostitution. In parallel, infancy is revealed to be the most sensitive period in any person’s life considering its brittle nature and the fact that it can be affected by the merest of events.

Furthermore, “prostitution depends on personality rather than personality upon prostitution” (“Prostitution”, 1957, p.399). Accordingly, Freud enlightens the idea that women who engage in prostitution show an inherent lack of confidence and a continuous feeling of being dominated by men (Flowers, 1998, p.24). This is why prostitution is considered a refuge for young girls who suffer from a weak character and a lack of closeness with others. In addition, Macleod (2006) points out that prostitution is implicated when solitude, desertion and ennui are extremely troubling a person’s life making it the only way out with a seductive offer of good care, enthusiasm and self-sustainment (para.3). However, prostitution isn’t always the result of a human behavior determined by a disturbed infancy but it could be also due to a genetically inherited disorder. As said by Flowers (1998), many investigations discovered that prostitutes usually have mental illnesses whose high severity could lead to permanent psychological disorders such as schizophrenia, a case frequently followed by suicide (pp.24, 28-29).

Finally, some girls consider prostitution an ordinary job because they belong to a family and a culture in which it is acceptable. This enormously affects their perception of sex trade making them more apt to be engaged in it. And given that “frigidity is far from universal among prostitutes” (“Prostitution”, 1957, p.399) these women continue to be more convinced in their wrong convictions and beliefs concerning prostitution. However, searching for pure psychological causes remains unreliable since prostitution could just be a matter of choice. On the other hand, a different cause leading to prostitution is intimately associated with the economic condition. In these situations, prostitution becomes the only get-away for these unfortunate people rather than being a choice.

Farley (1994) assures that “for women, prostitution is not about sex but about survival” (p.14). Indeed, homelessness is a common situation encountered by girls who become prostitutes afterwards. In other words, they are found bartering sex for money and especially for housing. In addition, almost 120 000 prostitutes are traded to Europe every year with the majority of them originating from the former Soviet Union such as Russia and the Baltic countries (Lethi, 2003 as cited in Hagstedt, Korsell, & Skagerö, 2009, p.166). Thus, poor countries provide a manipulating background pushing young girls to enter prostitution by seducing them with money which can obviously improve their financial situation. After countless studies on women involved in prostitution, Young, Boyd, & Hubbell (2000) found out that the majority of these women absolutely need to fund an addiction. Not having enough financial resources, they run to prostitution and are even willing to sustain any kind of violence in order to obtain their drugs and nourish their addiction (pp. 789-790, 796-797).

In fact, these prostitutes are the ones who will never be able to quit this work since they need a continuous financial support and fail to take the risk of searching for another way to provide it. In the book The Prostitution of Women and Girl, the author Ronald Barri Flowers (1998) points out that 80% of young girls were drug abusers before becoming prostitutes (p.27). Moreover, Young, Boyd, & Hubbell (2000) present evidence which proves that the relation between drug abuse and prostitution could be illustrated by a vicious cycle in view of the fact that one will conduct to intensification in the other (p.795). The latter is due to the fact that the addicts become more and more dependent on a certain drug because they crave for a larger quantity by the day, which means they need more money by the day. To afford the every rising price they end up working incessantly ignoring the bitter fate their lives had come to.

Furthermore, Shrage (1989) explains that women become prostitutes after failing in finding a profitable job since their weak personality and lack of authority makes the competition with others very difficult and hardly possible (p.358). Besides, these women with no self confidence brainwash themselves believing that prostitution is the most suitable job for their status and ruling out the possibility of finding a decent job someday. Research by Young, Boyd, & Hubbell (2000) points out that 55 out of 58 prostitutes have children and that prostitution becomes the most profitable job for these uneducated and unemployed single women (pp.793, 797). Therefore, permanent unemployment and need for financial support makes young girls infatuated about money and ready to enter prostitution in order to get it. The social environment has been strongly identified as a crucial factor contributing to the expansion of prostitution. First of all, it would be illogical to discuss the issue of prostitutes without pointing out that men buying sexual services are also deeply involved. In fact, following any economic module, high demand means more supply is needed and if there are no clients, prostitution will eventually fade away.

Thus, the high demand is an issue becoming more and more dangerous with time since it makes prostitutes stick to their “profitable” jobs. Moreover, Weitzer (2005) and Mansson (2006) highlight numerous factors related to the purchaser explaining the increase of the demand of buying sex such as timidity, physical problems, impatience, young age of the prostitute, and feeling of control (as cited in Hagstedt, Korsell,& Skagerö, 2009, pp.175-181). There are many network factors that facilitate human trafficking and push people to purchase sex such as: taxi drivers, hotels, pubs and restaurants. These encourage certain individuals to buy sexual services even if they haven’t thought of doing it before. In other words, lots of taxi drivers are allied with pubs with specific orders indicating them to circulate at night with the aim of finding people who want to party and have no special destination; hence they take advantage of these individuals and direct them to pubs in which the clients will be seduced by prostitutes.

For example, in Sweden, with the aim of publicizing sexual services and facilitating the meeting and contact between the prostitute and the client, a profile for each prostitute is found on internet (Hagstedt, Korsell, & Skagerö, 2009, pp.166, 174, 188, 192-193). Furthermore, people are always subjected to a huge influence coming from their surrounding which will completely mutilate their perceptions and behaviors. Discovering that their so-called boyfriend is a pimp trying to drift them into prostitution so that he could earn money is a very common situation among prostitutes (O’Neill, 2001, p.79-84). Likewise, O’Neill (2001) presents evidence which shows that girls who used to live in care institutions are the most likely to fall into prostitution (p.118).

This represents a very flagrant example of social differences since these women were not raised under the supervision of their parents. Gangoli (1998) affirms that decriminalization makes the work of the pimps and prostitutes much easier since there is no police control and censure (p.505). This is very logical since no one will fear government and there will be no limit and restrictions for prostitution. Davis (1937) emphasizes that capitalist system, opposed to communist one, makes the abolition of prostitution very difficult since business is extremely free and couldn’t be limited by boundaries (p.752). Nevertheless, legalization should be also more restricted since it has entailed a common tolerance and acceptance for this sexual practice that will in return lead to the engagement of more women in this work.

In conclusion, prostitution is clearly a social issue with dangerous consequences deeply affecting today’s society. It is either caused by the mentality of the prostitute, by her economic circumstances or by her social background. In fact, poverty is the number one cause of prostitution and can be abolished with clear and identifiable measures. However changing the faulty subconscious convictions of the individuals involved in prostitution is the hardest target to do.

In addition, the people buying sex should not be hidden behind curtains anymore because their presence is making prostitution one of the most profitable, dangerous jobs in the world. Nevertheless, searching for the real causes behind prostitution will always be limited. Accordingly, Davis (1937) explains that “any particular person’s connection with prostitution is a result of his or her own unique life-history, into which an infinite variety of strands, some economic and some not economic, are woven” (p.750). Finally, prostitution must be put into an end and social measures should be taken in order to prevent its legalization all over the world. 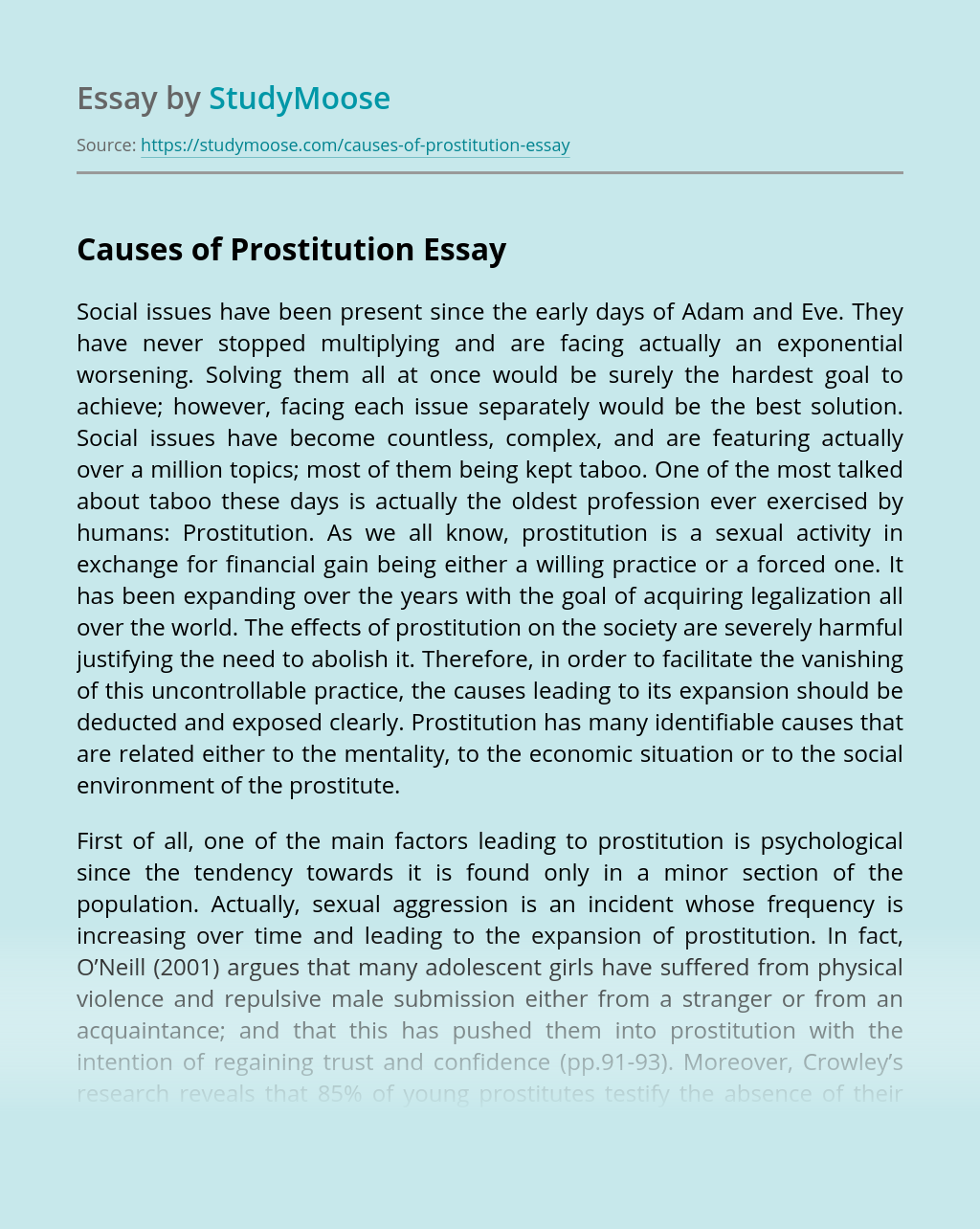