There are too many women and girls who are lured to prostitution. Men and boys are also being exposed for sexual purposes. In the 1998 study by the International Labor Organization (ILO), it was estimated that there were at least 400,000 to 500,000 prostituted persons in the Philippines with an estimated 60,000 to 100,000 children. In 2004, the number of those exploited in prostitution alone reached 600,000 and it ballooned to 800,000 in 2005. In a 2009 study, there were around 800,000 prostituted persons in the Philippines; half of them are children.

Don't use plagiarized sources.
Get Your Custom Essay on Prostitution Case Study Just from $13,9/Page

Annually, it is estimated that 3,266 children are forced into prostitution. The Philippines ranks fourth among the nations with the most number of children in prostitution as revealed in a study of UNICEF. Prostitution may now be the country’s fourth largest source of GNP according to the study by the Psychological Trauma Program of the University of the Philippines.

Prostitution thrives because of gender inequality and lack of respect for women’s human rights clearly manifested on the false notion that women are inferior, sexual objects and commodities while men are superior, decision-makers and owners of properties.

The system also thrives because of complex socio-cultural and economic factors — poverty, under-education, unemployment and economic disparity and power relations, making it easier for those who have more money and power to exploit more vulnerable people and lead them into prostitution and the sex trade. Women do not make a rational choice in entering prostitution; they settle with the limited options available to them bearing conditions of inequality that are set by the customers who pay women to do what they want them to do. At some point, State policies which are gender blind on the issue of prostitution may even result in compromising Filipino women’s bodily integrity to sex tourists, foreign and local, military and big business.

Our society has made prostitution “hidden in plain sight” – although it is everywhere, we tend to disregard and do not give priority to addressing it. Article 202 of the RPC as amended by R.A. 101583 provides: “Article 202. Prostitutes; Penalty. – For the purposes of this article, women who, for money or profit, habitually indulge in sexual intercourse or lascivious conduct, are deemed to be prostitutes. Any person found guilty of any of the offenses covered by this article shall be punished by arrestomenor or a fine not  200 pesos, and in case of recidivism, by arrest mayor in its medium period to prison correctional in its minimum period or a fine ranging from 200 to 2,000 pesos, or both, in the discretion of the court.” [emphasis added].

Notably, the above provision focuses law enforcement and legal sanctions exclusively on prostituted women. This is clearly an affront to women as it continues to criminalize prostituted women, while letting the customers and the pimps go unscathed.

SALIGAN, in its mission towards the empowerment of women throughout the country, joins various women’s groups in their clamor for national legislations that will fully recognize women’s rights and gender equality. Towards this end, SALIGAN supports and calls for the passage of the Reproductive Health Bill and the Anti-Prostitution Bill.

•The Reproductive Health Bill is a recognition  reproductive health is a basic human right and it is the obligation of the government to protect and facilitate the enjoyment of this right.
•The Anti-Prostitution Bill states that women exploited in prostitution should never be treated as criminals; instead, they should be treated as victim-survivors of sexual exploitation. Being victim-survivors, the blame should not be attributed to sexually-exploited women but on those who take advantage of them, as well as those who profit and gain from their sexual victimization. The proposed pieces of legislation find bases  international instruments, foremost of which is the International Bill of Human Rights which lays down the fundamental human rights of every individual.

Article 2 of the Universal Declaration of Human Rights provides that: Everyone is entitled to all the rights and freedoms set forth… without distinction of any kind, such as race, colour,sex, language, religion, political or other opinion, national or social origin, property, birth or other status. It recognized gender equality as one of the basic tenets of humanity.

In addition to this, the Philippines is also a signatory to the the Elimination of Discrimination against Women, the paramount international human rights instrument espousing the promotion, protection and fulfillment of women’s rights. As signatory to CEDAW, the Philippines is duty bound to give life to the provisions of the Convention by incorporating into its legal system laws that recognize gender equality, define as well as prohibit gender discrimination and put forth a national agenda that would end all forms of discrimination against women in its society. Twenty-six years after the ratification to the Convention, the Philippine Government has been remiss in complying with its State obligations under the Convention.

Furthermore, the 1987 Constitution recognizes the role  women in nation-building and ensures fundamental equality before the law between men and women. As a state policy, it is therefore incumbent upon the State to enact measures towards gender equality. Beyond international and constitutional bases, the above-mentioned proposed measures would address pressing issues of women who,more often than not, without protection from the State through domestic laws,suffer from gender discrimination, marginalization and violence.

Also, in the Law of Anti-human-trafficking and commercial on humanity says that all kind of sexual services are prohibited by law, and the person who run a business of providing the sexual service must be imprison from one year to five years, and find rank from 5 million pesos to 30 million pesos, states in Law of human trafficking and commercial activities on humanity (as cited in ADHOC, 2008). If the state wants to legalize the prostitution, it has to edit many laws that already put in to practice.

The second reason is that our government policies do not support prostitution. Government of Philippines advertises Philippines as the place for best place to live and cultural tourism, but if the state legalizes prostitution; 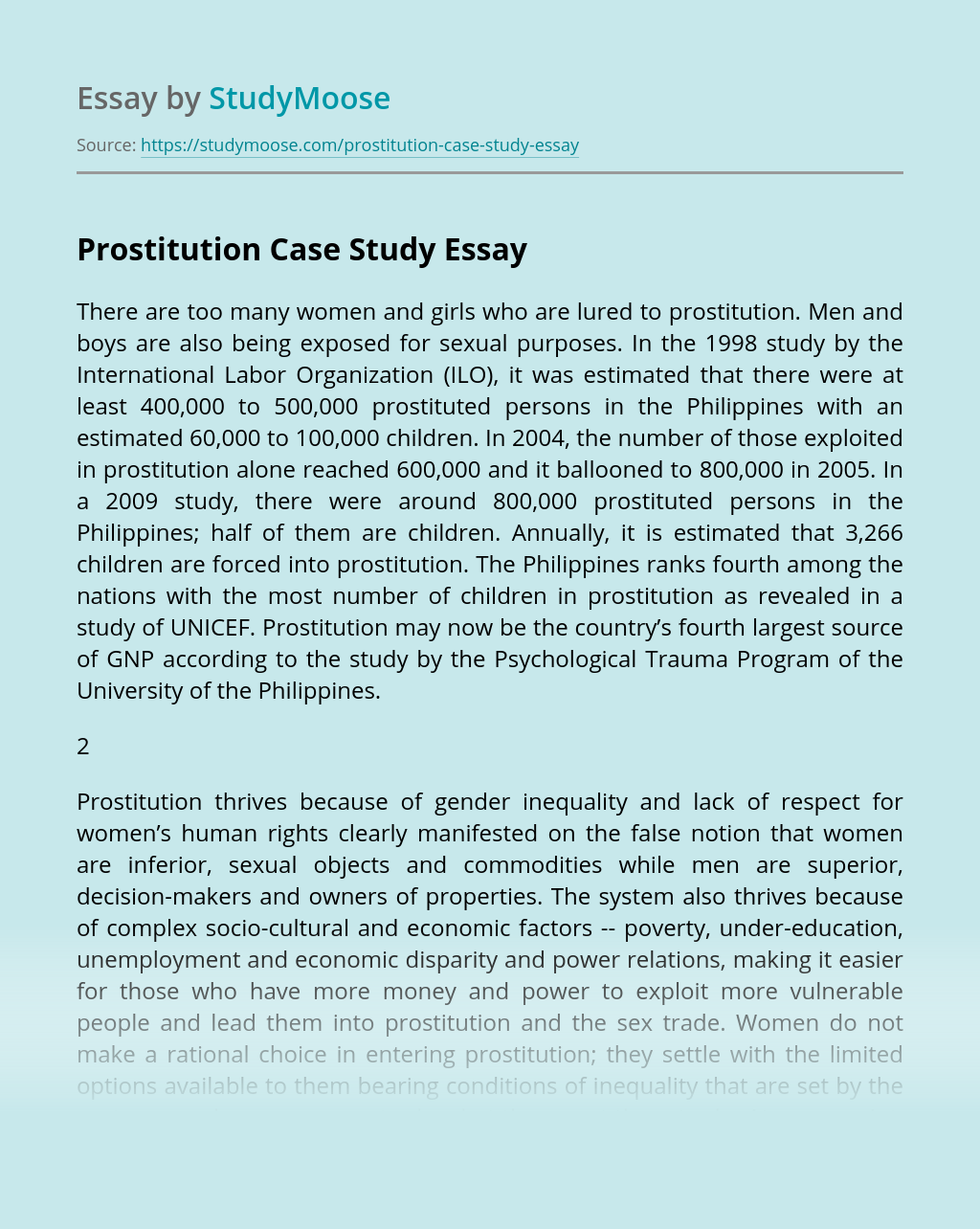 Gender in 'The Importance of Being Earnest'

Dramatic comedy originated in Ancient Greece in 5th century BC, centred around loose plot lines and exploiting certain situations through parody, farce and mockery. Comedy started developing in 4th Century BC where intricate plot lines were introduced, commonly based around love and romance and usually culminating in a satisfactory and happy resolution. This is much...

Alison Bechdel’s “Fun Home: A Family Tragicomic” is an exciting autobiography with comics that bring her story to life. Alison Bechdel wrote this book about her childhood, the relationship she had with her father and one of the many things they shared in common, their sexuality. In addition to their common homosexuality, Alison and Bruce...

Get Essay
Women Are the Weaker Sex

Women are the weaker sex? Are they really? Because as far as I know, women are the ones who most times stick it out, finding a way to endure to the very end. Men have become so laid back these days, causing their role to be taken from them and give to women, one most...

Female feticide is one of the biggest challenges that India is facing today in terms of gender. It has become a significant social phenomenon. It transcends all barriers of caste, class and community and even the north-south dichotomy. The World Economic Forum’s annual Global Gender Gap report for the year 2007 has shown India at...

Davies argues that the sex role socialization theory does not adequately explain how we understand and become man and woman (p282). She concedes that the social structure with which man is entrenched; influence the conception of gender but the individual is as much a part of that process as the social environment. Davies says that...