Cognition is defined as the process of learning that includes perception, memory, judgment and thinking. It is also the basis of Jean Piaget’s theories on learning. He was able to identify the different stages of cognitive development by interviewing and observing children of different ages in gathering the data to which he was able to formulate his theories. He was more concerned on the wrong answers given by children in tests given to them in school by their teachers and used them as a tool to be able to identify the different characteristics manifested by children of different ages and saw them as more significant to a child’s intellectual development.

Turn in your highest-quality paper
Get a qualified writer to help you with
“ Reaction Paper on Piaget’s Learning Theory ”
Get high-quality paper
NEW! AI matching with writer

Piaget presented four learning stages as observed from different age brackets of children and each stage is necessary to reach the later periods of cognitive development. First is the sensorimotor stage which can be observed from birth to two years old. Second is the pre operational stage evident in children age two to seven years old.

Although, some critics say that these changes may not occur at the same stages and that some characteristics may have been actually perceived by a learner at an earlier stage or age but these observations can only be seen to some extent and not in most cases. Clearly, Piaget’s study offered us direct recognition of the level of comprehension a learner is capable of.

Furthermore, in determining these different stages, we are able to understand and characterize now the patterns of intellectual capabilities of infants, children and adolescents and eventually help us to be able to effectively communicate to them and see to it that their learning environment is right to their age. The practicable means and ways of giving them the appropriate kind of learning should be considered and hence their learning capabilities are thoroughly sharpened by not forcing them to move on to higher stages of development yet, as a way to advance their minds to something that they are not ready for.

As teachers in the future, we should not be able to discriminate the level of thinking of learners, instead we need to focus on the enhancement of their intellectual ability by reaching out to them and adjust to their set of minds to be able to efficiently offer them the best kind of learning suitable for them. 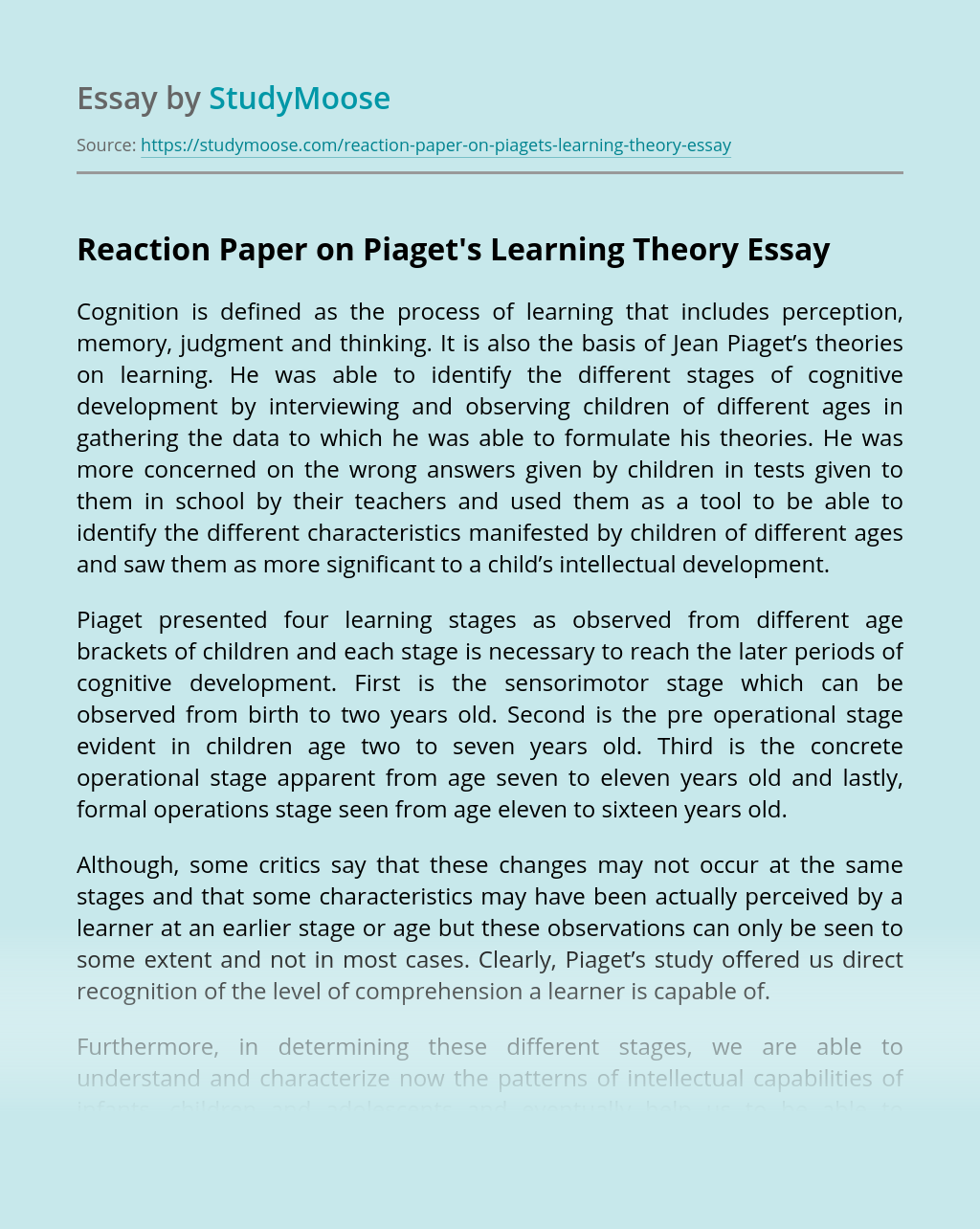 Turn in your highest-quality paper
Get a qualified writer to help you with
“ Reaction Paper on Piaget’s Learning Theory ”
Get high-quality paper
Helping students since 2015
Stay Safe, Stay Original