Don't use plagiarized sources. Get your custom essay on
“ Social Control Theory and Self-Control Theory ”
Get custom paper
NEW! smart matching with writer

These theories are different from each other even though one of the authors, Hirschi, worked on both them. Each of these theories has their own strengths and weaknesses and this paper will explain their viewpoints by comparing and contrasting their basic tenets and propositions.

Theorists who are associated with each theory will be mentioned along the way, including their opinions on delinquent behavior.

Hirschi’s theory is often called Social Bonding Theory to differentiate it from earlier theories on delinquent behavior. After its introduction however, earlier control theories have only been discussed as a background or to test Hirschi’s theory which now stands at the center of criminological theory. Criminologists today and other social scientists have come to refer to Hirschi’s theory as Social Control Theory. Proponents of this theory include Albert Reiss, Jackson Toby, and Ivan Nye.

The central proposition in Social Control Theory is that cases of delinquent behavior occur when a person’s bond to society becomes weak or is completely broken. The four major elements that form such a bond include: attachment, involvement, commitment, and beliefs. Conformity becomes more possible for an individual the greater the strength of these elements in bonding with community members such as parents, school teachers, and friends. When a person’s bond with the community weakens, the possibility of him, breaking the law increases (Akers, 1999, p.

86). “Attachment” is a very important concept in Social Control Theory. It refers to the extent to which a person has close emotional ties with other people. When a person is attached to another person, he cares about his expectations. He also tends to be more constrained or affected by the norms which he shares with the other person. As a result, he is less likely to violate those norms or resort to delinquent behavior (Akers, 1999, p. 86). “Commitment” refers to how much effort, time, and energy a person invests in the pursuit of his goals.

Violating the law is associated with economic, personal, and professional risks that may deter a person from succeeding in his goals. The consideration of the costs of his actions may deter a person from committing delinquent behavior. “Involvement” refers to the degree by which a person engages in activities that are acceptable to society. According to Social Control Theory, when a person spends most of his time doing such activities, he has less time and other resources to engage in deviant activities (Akers, 2009, p. 265). Finally, “belief” refers to the person’s level of acceptance of laws, mainstream values, and moral codes.

If a person’s grips on these beliefs are weak, then his chances of engaging in deviant acts increase (Akers, 2009, p. 265). While Social Control Theory has many supporters, Hirschi decided to move away from his first theory to another one called Self-Control Theory. Hirschi collaborated with Gottfredson to formulate a theory of delinquent behavior based on only one kind of control which is self-control. Self-Control Theory is a general theory of deviant behavior that attempts to explain all individual differences in the propensity of a person to commit or refrain from deviant acts or crimes (Akers, 1999, p.

90). Researchers Robert Sampson and John Laub have provided mixed evidence in support of the theory. According to Hirschi’s latest theory, the concept of self-control refers to the ability of a person to refrain from deviant behavior whose long-term effects may bring more displeasure to him than the momentary pleasure he enjoys (Kirsh, 2006, p. 60). For instance, a person may derive some pleasure in hitting his boss who always treats him unfairly but the long-term consequences of such a delinquent act, such as law suits or a lower pay, will cause greater dissatisfaction in the long run.

Hirschi and Gottfredson state that people who resort to delinquent behavior derive intense pleasure from their antisocial activities and they pay little or no attention to their possible long-term effects (Kirsh, 2006, p. 60). Self-Control Theory’s concept of self-control is related to the developmental concept of “delay of gratification. ” People who do not mind the long-term consequences of their delinquent behavior lack self-control. They can’t wait for a better reward which might be delayed.

They’d rather choose to pursue a lesser reward which is immediately pleasurable (Kirsh, 2006, p. 60). People who have a high-level of self-control, according to the theorists, are less likely to engage in delinquent behavior at all periods of life (Akers, 2009, p. 265). Since Self-Control Theory emphasizes the importance of positive short-term effects versus long-term negative effects in determining delinquent behavior, it is useful in explaining delinquent acts where the subject has enough resources to calculate the benefits and costs of his actions.

Social Control Theory is a very good tool for analyzing delinquent behavior because it takes into consideration society and a person’s degree of attachment to it. The theory also identifies significant contexts within a person’s life, home and school, for example that are not given consideration in Self-Control Theory. One problem with Social Control Theory however, is that it doesn’t fully explain how social controls develop through time. It also doesn’t account for how the elements of attachment, involvement, commitment, and belief become favorable in particular circumstances. 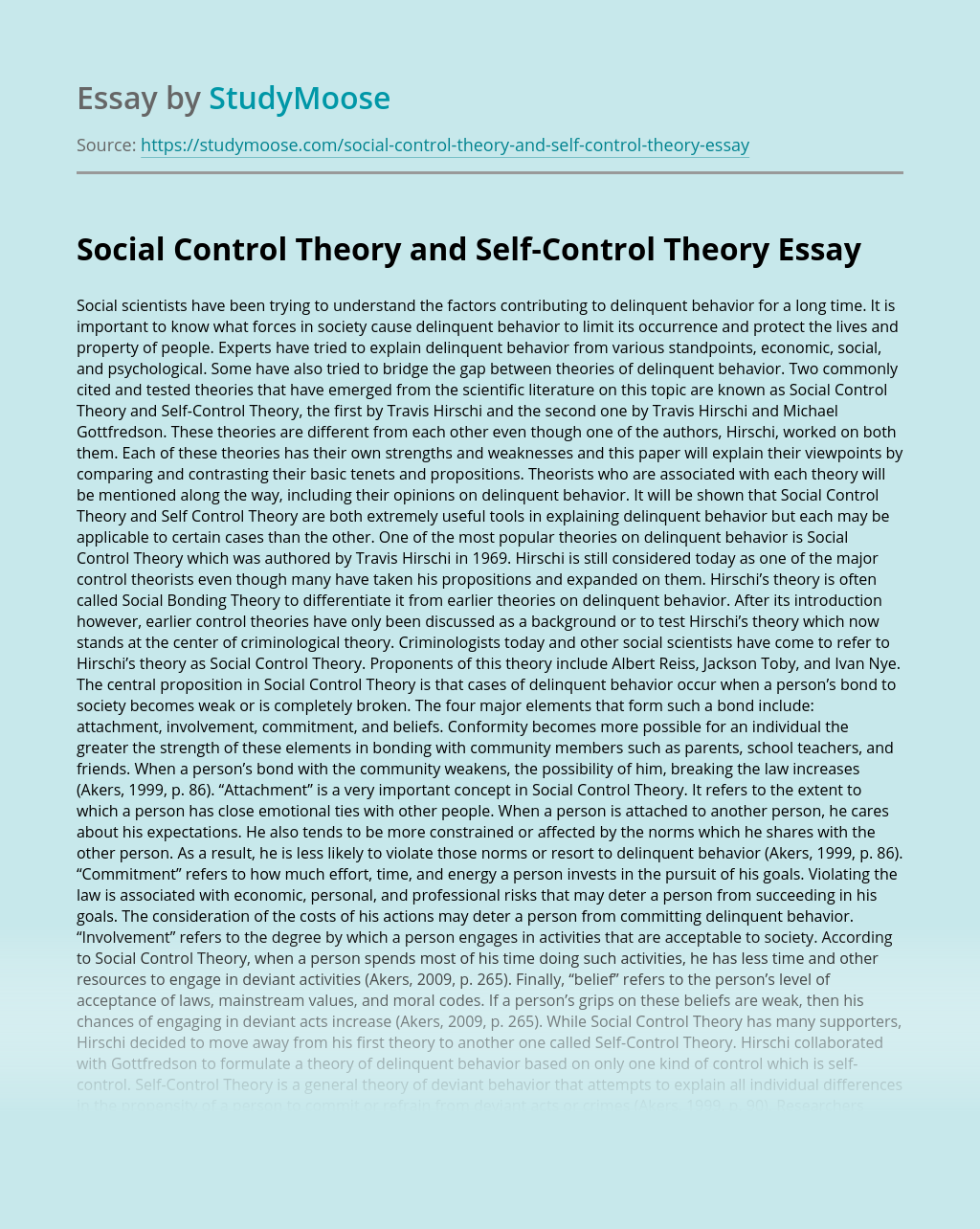