Self-concept is a self-description based on how you perceive yourself, with that said the very essence of your emotion is derived from self-concept and as a result from that, self-esteem… which is a self-evaluation that is rooted in your self-concept. Only your beliefs are what influence your emotions, even if that belief is what you derive from another person. Given a personal scenario; I started working out on a consistent basis, the more I worked out the more my self-concept improved, and as a result of that so did my self-esteem.

Don't use plagiarized sources. Get your custom essay on
“ Self-Concept and Self-Esteem ”
Get custom paper
NEW! smart matching with writer

I felt better and my emotions were significantly more stable than prior to working out.

see more:identity self image and self esteem

Although self-esteem is a result of self-concept they have very many similarities. Say if someone calls a girl fat and ugly, the typical anorexia background, regardless of whether or not she doesn’t want to believe she is fat and ugly if enough people say it, her self-concept will be a reflection of their influence upon her belief.

This additionally impacts the girl by decreasing her self-esteem; as her self-concept goes down so does her self-esteem, they are a correlative relationship. The correlation is impacted by more than her social self though; her material self is very much a prominent aspect in this certain set of circumstances, the ideas of her social self often times influences her material self through ideas such as “My clothes are too big” or “My clothes must be ugly too.”

Several aspects of our cognitive self are indicative of the rest of our self’s.

Although this might be over speculation… when you see a much higher percentage of suicide rates in younger aged citizens, where our social self is definitely the most prominent factor in our self-concept, the idea of how much all these parts play an influential role in a snowball effect within a person’s self-esteem can only conclude that all of our self’s are very much a real aspect of our daily lives. This idea is known as reflected appraisal, the embodiment of how you think of yourself based on your perception of how others see you. Conversely if multiple people tell you how good you look or how popular you are with women/men, our “self’s” snowball in the opposite fashion, we tend to get very cocky and think way too highly of ourselves.

When making social comparisons in that scenario, we tend to overestimate our perception of us compared to the people around us. Tying back in to the previous situation though, with our society moving towards a more interactive and social community, additionally with the higher statistics of suicide rate among teens (the rate of suicide in teens has tripled since 1960 to now) the idea of self-concept and self-esteem has a substantial foothold in our more adolescent ages. This means at a younger age, our self-concept is more derived from outside factors, whereas self-esteem though being a root from self-concept, is always derived from internal factors.

Taking this idea that self-concept and self-esteem are similar in correlation between positive and negative emotions, and the influential factors including all the “self’s” affect both sides of the coin, the very idea of self-esteem always results from what we believe of our self, despite the varying root of self-concept coming from either internal or external presences. To counteract the influence that the negative emotions brought about by the social self where people would call the girl ugly, the girl must have a very strong willed mind and spiritual self, the spiritual self although brought about through social means such as churches, synagogues and mosques just to name a few, ultimately are defined by our own nature; our spiritual self in its most basic form is what we truly are founded upon both morally and faithfully.

Essentially what this means is that a person of faith, regardless of what faith they follow, having a much lower statistical suicide rate than that of the nonreligious counterpart. This could also lead to the source of why there are lower suicide rates among adults than teens, due to the fact that there is a much higher percentage of atheist rooted teenagers than their adult counterparts… the older the person, the higher the percentage of that population is tied to some religious affiliation.

Although self-concept has many underlying aspects that define self-esteem, they are also very much different. Ultimately self-concept results from all of our self’s, spiritual, social, emotional, cognitive and material, this makes our self-concept a very hard idea to define, but a very VERY impactful and obviously influential idea nonetheless. Self-concept and self-esteem define who we are; they are what give us meaning to our life, even if that meaning is defined by ourselves.

Self-Concept and Self-Esteem. (2016, May 09). Retrieved from https://studymoose.com/self-concept-and-self-esteem-essay 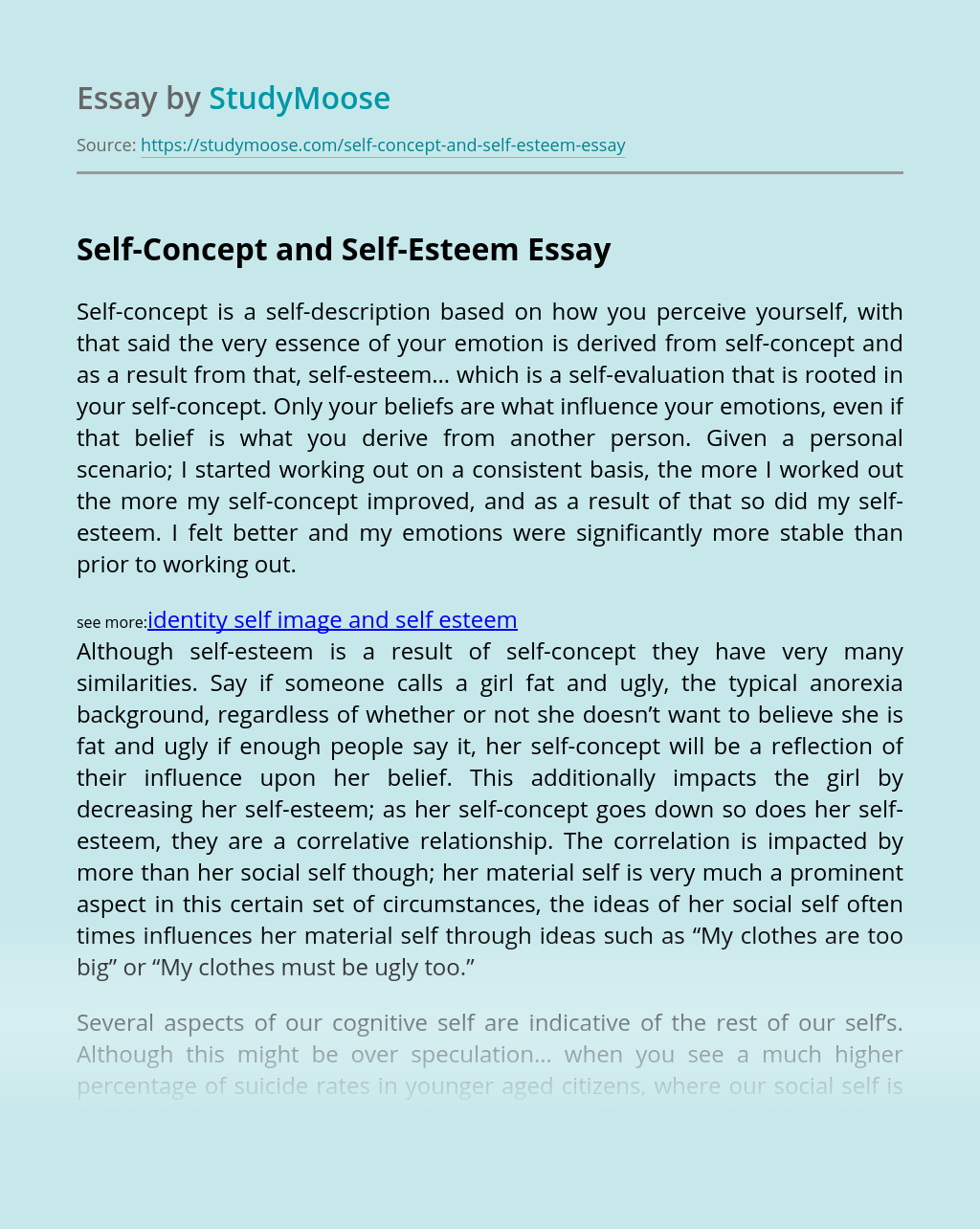