Individuals with low self-esteem from the Freudian perspective

Self-esteem is the way people think and feel about themselves and the way they evaluate how well they do things which are important to them. People with low self-esteem usually have an unsatisfactory and unstable level of a sense of self (Heine et al. , 1999). From the Freudian perspective, their sense of self is disturbed and they are vulnerable to any threat to self-esteem. Individuals with low self-esteem do not evaluate themselves positively and feel worthless, powerless, humiliated, and unhappy most of the time.

Turn in your highest-quality paper
Get a qualified writer to help you with
“ Individuals with low self-esteem from the Freudian perspective ”
Get high-quality paper
NEW! AI matching with writer

see more:explain the links between identity self image and self esteem

They feel they must always please others, need constant approval or validation, and also try to show that they are better or more important than other people. Their psychological discomfort in real life often leads them to fantasize that they are important, successful, and powerful. But these fantasies about living a successful life prove to be not enough to soothe their anxiety and dissatisfaction with their place and role in the real world.

Consequently, it is common for individuals with low self-esteem to believe that they deserve the attention, admiration, or love of other people, and also that they are special in this world.

They are capable of idealizing themselves as well as suggesting that others are of less value or importance. They tend to refer to themselves quite often (for example, they use excessively pronouns “I” or “me”) and want to be viewed by others as assertive and self-confident people. If the individuals in question perform well or succeed in something, they usually overestimate their success or performance and emphasize their abilities and skills.

But if these individuals fail to perform well, they will usually not accept responsibility for their failure but instead will try to ascribe it to the faults of other people or circumstances.

People with low self-esteem also want to know if their appearance is adequate and if they look and behave appropriately. So they may spend a lot of time in front of a mirror watching the way they hold themselves when standing, walking, sitting, or speaking. In other words, individuals with low self-esteem do their best to prove they are not worse than others and to maintain the favorable and positive opinion of them. It is thus not surprising that “Page # 2”

they prefer the company of people who will admire and support them to those who might criticize and ridicule them. They usually react to any criticism by becoming angry, hostile, or ashamed and humiliated (Heine et al. , 1999). Low self-esteem in the Freudian theoretical model According to Sigmund Freud’s psychoanalytic theory, a sense of low self-esteem may be explained by a conflict between individuals’ wish to perform well and be successful and a worry (anxiety) that they may fail in this task and, as a result, be criticized or humiliated.

What follows is a situation when individuals feel unhappy and blocked instead of acting appropriately. Their experience of anxiety caused by their deficiencies is painful to live with and can’t last for long. In such cases defense mechanisms are used to solve the problem and they start to pretend or imagine that they possess the qualities which, in reality, they lack. They emphasize their importance, power, or independence and try to convince other people that they are really like this.

Every now and then they need evidence that they are loved and admired by other people in order to maintain their positive image and self-esteem. Those who criticize them only enhance their feeling of anxiety, and are therefore avoided (Heine et al. , 1999). It is not known exactly how and why people develop low self-esteem. But, according to Freudian theories, low self-esteem, as well as many other mental problems or disorders, dates back to and stems from negative experiences and failures in people’s early life.

Children and teens have low self-esteem at some time in their life. For example, they may not have been able to solve some problems or reach unrealistic goals, and were not encouraged, praised or complimented by their parents or educators in their childhood or adolescence. Criticism from other people, particularly parents and teachers, may have made them feel worse. Their wishes (drives) and fears (anxiety) from a specific time period in their early life have been taken into adolescence and adulthood.

Individuals with low self-esteem from the Freudian perspective. (2017, Feb 06). Retrieved from https://studymoose.com/individuals-with-low-self-esteem-from-the-freudian-perspective-essay 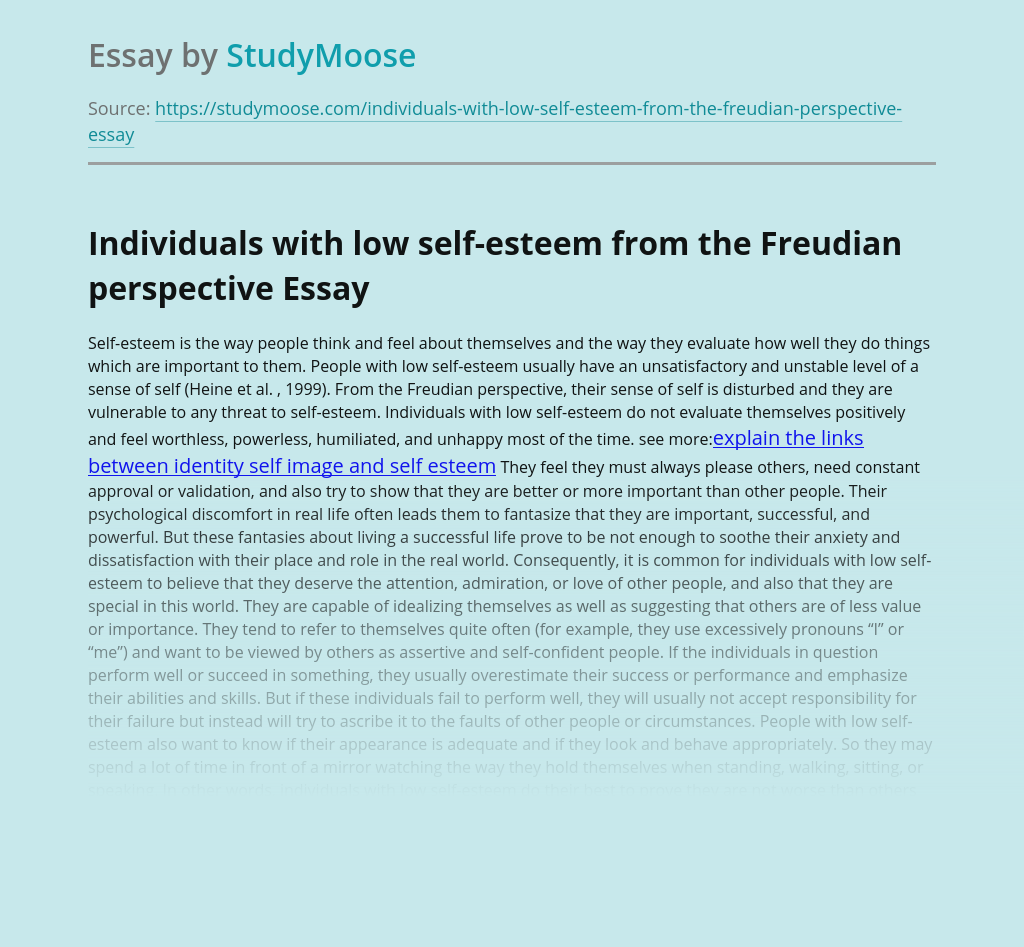 Turn in your highest-quality paper
Get a qualified writer to help you with
“ Individuals with low self-esteem from the Freudian perspective ”
Get high-quality paper
Helping students since 2015
Stay Safe, Stay Original