Body Image, Self Esteem and Personality Factors in Males and Females

Personality can be measured through many tests. Two major tools to measure personality are objective tests and projective measures.

Don't use plagiarized sources. Get your custom essay on
“ Body Image, Self Esteem and Personality Factors in Males and Females ”
Get custom paper
NEW! smart matching with writer

For example, Big Five Inventory, Minnesota Multiphasic Personality Inventory (MMPI-2), Rorschach Inkblot test, or the Eysenck’s Personality Questionnaire (EPQ-R). All of these tests are helpful because they are reliable and valid, which makes a test accurate. (Aleksandrowicz, 2009)

The Big Five personality traits, also known as the OCEAN model is a scheme of classification for personality traits given by McCrae and Costa (1987). (Coetzer & Rothmann, 2003) It provides a brief measure of five domains of personality which are- Openness to experience (curious vs.

There are various factors that develop one’s personality. These are:

Additionally, social factors too have some influence on the development of the personality which are:

Self-esteem has often been termed as a personality trait which means it is stable and enduring. Self-Esteem is a person’s emotional assessment of their self-worth. It incorporates beliefs about self and emotional states like triumph, gloom, pride, and disgrace (Hewitt, 2009). As stated by one of the pioneers of this domain, Rosenberg, self-esteem is an individual’s overall positive evaluation of self. According to him, high self-esteem consists of a person respecting himself or herself and having high self-worth (Rosenberg, 1965).

Self-esteem is a personality trait that shows the relation with the self-image and self-conscience ideas. Self-approval is a fundamental human desire. High self-esteem score is an important factor in order to achieve happiness. Studies have found self-esteem as an important factor in emotional well-being (Baumeister, Campbell, Krueger and Vohs, 2003). A few studies have found that high self-esteem people are more relentless despite failure than low self-esteem people. High self- esteem individuals are also more effective in self-regulating goal-directed conduct (Di Paula and Campbell, 2002).

Individuals with low self-esteem usually go through feelings of worthlessness, inferiority, and instable emotions leading to low satisfaction or disappointment with life (Ha, 2006). Besides, there is a tendency of respondents with low scores on self-esteem to have a negative perception towards others and personal situations (Mackinnon, 2015).

3 Theories of Functions of Self-Esteem

Self-Determination Theory (SDT) states that a person is born with an intrinsic motivation to explore, absorb and master his/her whereabouts and that high self-esteem is obtained when the basic psychological needs of life are balanced.

At the point when social conditions provide support and the chance to satisfy these fundamental needs, self-growth, vitality, and well-being are improved. Relatedness was an addition to the original theory to represent people’s intrinsic ability to make meaning and associate with others through the internalization of social practices and values (Deci & Ryan, 2004).

The internalization of cultural values is a key factor in Terror Management Theory (TMT) in which self-esteem is viewed as a culturally-based construction derived from integrating specific contingencies valued by society into one’s own ‘worldview’.

Sociometer Theory (ST) states that a basic level of social consideration or belonging is necessary for humans to reproduce and survive with self-esteem functioning as a sociometer. The ability to proficiently determine others’ responses affecting an individual’s status helps the creation and maintenance of a few meaningful connections.

To not be a part of a worthwhile relationship affects self-esteem more negatively than the positive impact of being a part of less meaningful connections and inclusion is always preferred to be viewed as positive (Downs et al., 1995).

The issues with body image can be analyzed through body negativity and body positivity. Negative body image comprises a disoriented perspective of one’s shape; whereby one may often feel self-conscious or embarrassed and may think of others as more attractive than self. Apart from having low self-esteem, these types of people often fixate on bringing changes in their physical appearances. (Schilder, 1935)

Body Image, Self Esteem and Personality Factors in Males and Females. (2020, Sep 08). Retrieved from https://studymoose.com/body-image-self-esteem-and-personality-factors-in-males-and-females-essay 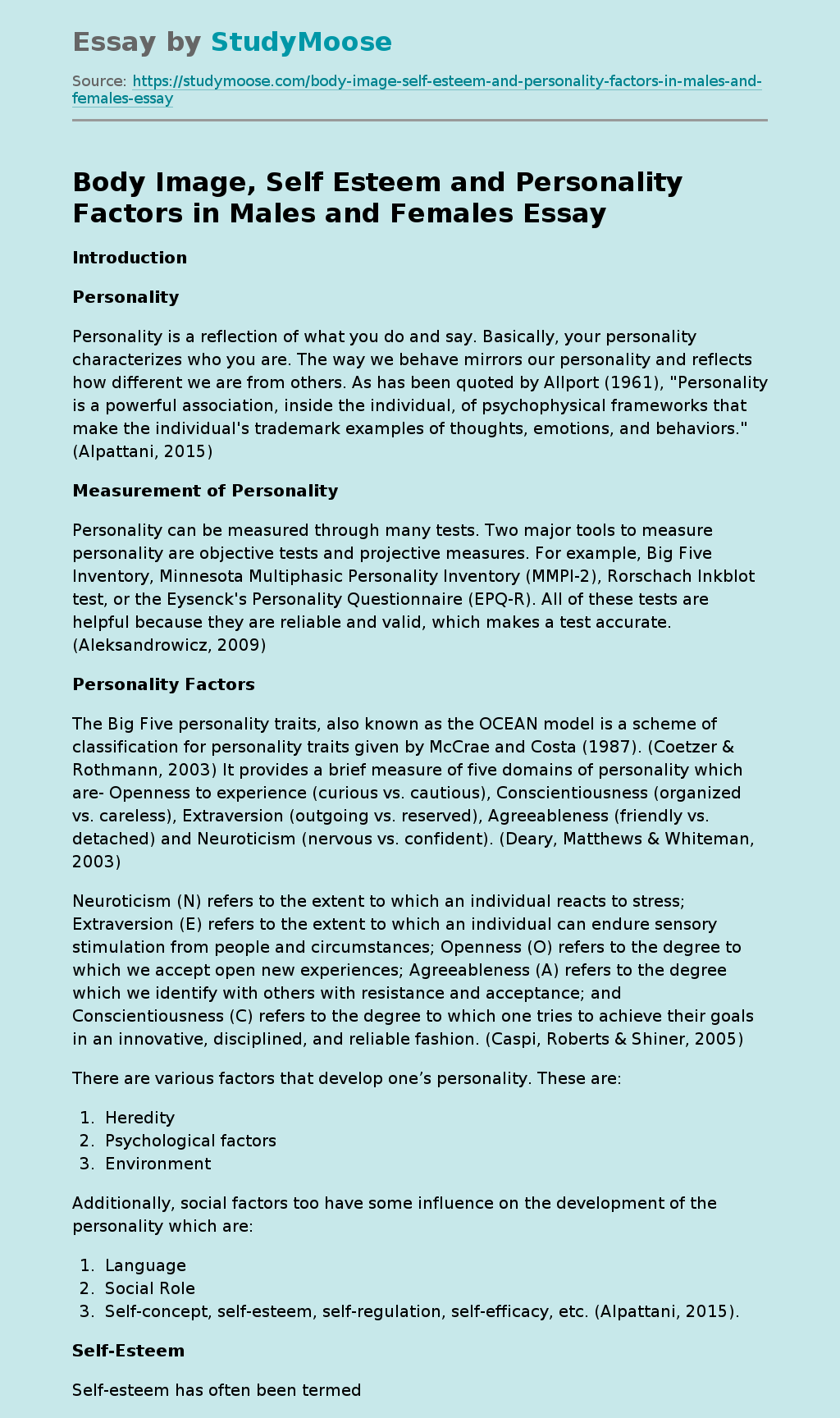