Are Females Better Students Than Males

Amy: Males are simply smarter. Thousands of years of male dominance must have meant something.

Don't use plagiarized sources. Get your custom essay on
“ Are Females Better Students Than Males ”
Get custom paper
NEW! smart matching with writer

Why would males be considered dominant by history? Because its a fact that was always proven. Males are born smarter, although they have a lot of sexual desires.

Yeeting: The time has change. Come on. We might think that boys are good at everything… And that is wrong. Most of the scientist might be boys, but what about Barbara McClintock-the one that found out that DNA and Irine Joliot-Curie-the one that found nuclear. I have to admit that girls are also better.

Sajetha: Girls are more dedicated. Girls have a tendency to dedicate more time and energies to their studies than boys. Girls typically set a schedule for studying that rarely is interrupted.

This consistency ensures that studying will occur on a set and regular basis.

Amy: No, females and males are equal students. Females are no better or worse students than males. Both genders have their pros and cons in terms of being a student, but more importantly, how great a student is is up to the individual. It’s really impossible to say if any one gender is better than the other. They’re both equal.

Yeeting: Intelligent, powerful and smart. Girls are more intelligent, discipline and matured than boys. Now a days in most of the universities girls are in the top of the list.What do you say? But boys think that they are more creative and intelligent.

Tvya: Females are NOT better than Boys. Most people will tell you that girls are smarter than boys. A study by Dr. Paul Irving and Dr. Richard Lynn, states that the opposite is true. Despite the fact that girls get slightly better grades, males on average have a higher IQ than girls by about 5 points. The grades are merely a product of an educational system geared towards females.

Sajetha: I’am a boy. Being a boy I will support girls as it is universal truth that girls are better students. I accept boys have stupid and nasty thoughts. Girls have a kind of discipline in them and they maintain it. Girls follow what the teacher say in class and boys usually do opposite. Only a few examples can be seen that boys seems to be better ones but other boys use to call them bookworms. But girls don’t do.

Amy: No I do not believe this. This doesn’t mean that one is better than the other, this simply means that each excel in their own way. As for successful males versus females, it hasn’t been proven that females have more success in the future or that they are smarter.

Yeeting: Yes they are Because girls are more mature than boys and they focus better and they get in trouble way more than boys. Also the female gender starts to mature a year or two earlier than the male gender so that’s why i think girls make better students than boys.

Sajetha: Females are always better student than the male. I am totally agree with this statement. That’s why they got the chance to study in old time and there was no chance of study of girls. Their family members think that this is not good to send females to school but females proof this that they are good they have right to study even they are better than the males in our classes.

Yeeting: Of course! There is no doubt that the girls are superior than boys in every aspect. I think that the girls have more moral values than the guys. Girls make world but the boys just destroy it. By the way I KNOW that there is no need to explain the importance of girls because we all know that our world cannot run without them.

Tvya: I say no they are the same. Each student are the same. Some can do good on day and the other can do bad. You cant chose which is better because at the end of it they are all just the same. I think that pupils shouldn’t be judged by the way they do their work we should just let them be them.

Sajetha: Yes there are Because I said so. They are better because at school we are doing a debate on who are better students. And my group got girls are better students. So I did some research and I went on this website and I see that 6% more voted for boys than girls so I said girls are so it would be only 3% and then it told I have to write something if I brought it up a % so I wrote this.

Amy: Definitely not — .. Affirmative action for females, a system designed for female learning patterns. As students are females better? No! But in current conditions, maybe. This is a very poor excuse to preach female superiority, whereas if anything even hinting to superiority of males is taken with little seriousness and is seen as blatant sexism, double standards.

Yeeting: I think that females are better at school Because as my school we got to go to a baseball game if you got straight a’s in all subjects there were like 15 people invited and only 1 guy got invited. So that why I think that girls are usually better students than guys but that’s at my school your school may be different.

Tvya: I totally Disagree. I believe everyone’s equal . We are all born with the same brain capacity . We choose to study or not to study , women choose to study but it does not point a finger that they are smarter . We are the one’s that have control over ourselves . No one was born stupid!

Are Females Better Students Than Males. (2016, Sep 23). Retrieved from https://studymoose.com/are-females-better-students-than-males-essay 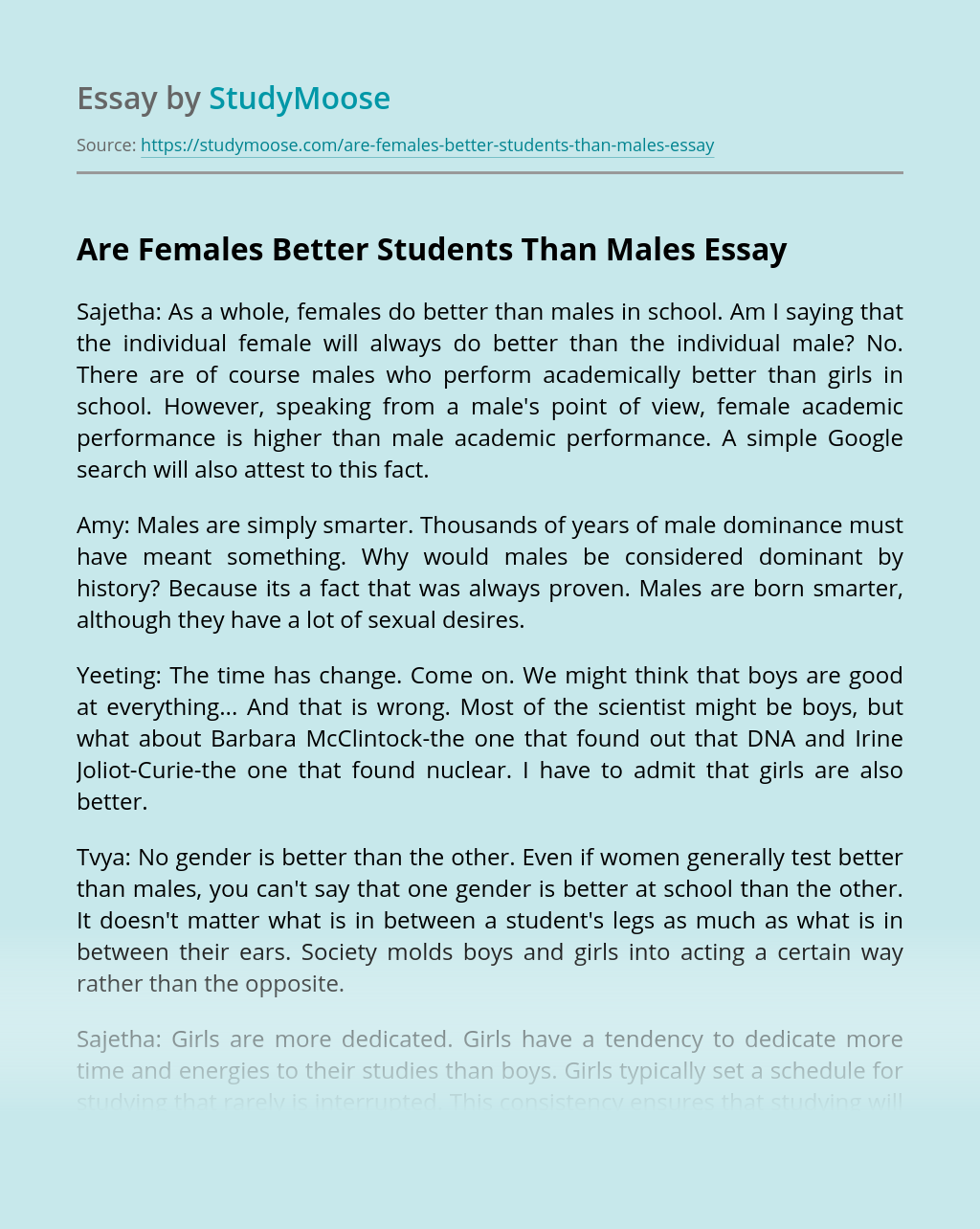