Today’s life has many difficulties and people are the victims, so they plan to make it easy as they canother. So they can reach a good position. They have more friends in the community since it is small. The village people always try to protect their traditional habits and culture. Life in the village has clean air and the environment is very beautiful. The village has less noise and rush. So the pollution is less. The village has not lot of vehicles.

Don't use plagiarized sources. Get your custom essay on
“ Country Life Is Better Than City Life ”
Get custom paper
NEW! smart matching with writer

So roads are less dangerous for driving cycling. They can get fresh vegetables and fresh fruits. The environment of the village is pleasant and silent and it has scenic beauty.

Same day villagers live same place. Village people have to face many difficulties for their lives , like traveling problems. They have to go to the city for supply their needs. Although the life in the city is more comfortable than village, I like village life Living in the city is better than living in the village.

Today’s life has many difficulties and people are the victims, so they plan to make it easy as they can.

One of these experiences is migrating from villages to cities. I think that living in the city is better than living in the village for many reasons. Here, I’m going to write about three reasons behind migration which are enormous facilitation of services, near our work and the amount of freedom gained.

The first reason for living in city is that it has more services than in a village such as hospitals, airport, commercial complexes, and big parks. These services attract people to live in city because they find anything they want. For example, in holiday people want to go out of their homes, so they can find a lot of places to visit, but in villages there are few services.

The second reason is that it’s near our work and people now want to live near their work to be able to return to their families everyday to become relaxed and to take care for their families. Also, when people live in villages and work in cities they face a lot of difficulties such as they should return every week to their village and that is very tiring because of long roads and car accidents.

The last reason is that freedom because people in city are more open and they have more knowledge. For example, when you are in the city you can wear any kind of clothes but you can’t do that in the village. In addition, when you are living in cities you can depend on yourself but in village you must fallow your family.

In conclusion, I think living in cities is better than living in village. That’s because many reasons but here I wrote about three reasons behind migration which are near our work, the amount of freedom gained and enormous facilitation of services.

In Certain cases, never cross your mind that City life is better than village life. However, there are so many advantages and disadvantages in city life and village life, also there is a big differ in the lifestyle with a little similarities. Reality, city life is more comfortable and civilization. As will as there are a lot of chances to developing the live. firstly, in City life there is a good opportunity for a young people make theme start them life with a high salary because the big companies located in the cities, in addition, a good education for children because there are better school than in the village, also, a convenient homes, large shop complexions, banks, offices, hotels, and hospitals. Furthermore, a lot of things that cannot may in the village. On the contrary, there are people who prefer to live in the village because they love the village life with its healthy clean air and fresh products and they cannot live in cities, but almost they are usually the elderly.

Although living in the city has many advantages there are some disadvantages too, the cost of the living is very high in the city, the city is always noisy, no fresh air and pure water. So it is hard to lead a healthy life. On other hand the village the undeveloped area for example, we cannot easily get many facilities the insufficient medical and education facilities, few opportunities to make money, little entertainment, no or little public transportation, also less facilities than a big city offers. Over all there are some similarities between both locations with big differences. But for each lives there is lovers who cannot switches lives to the other city, at the end, I see that Living in a village near the city is the best way to combine the benefits of this two lives.

Reasons Why Country Life is Better Than City Life

“who can describe the pleasures and delight, the peace of mind and soft tranquity One would feel in the balmy air, green hills and rich woods of a village.”-these Lines are rightly said by great English writer-“Charles dickens”. villages are generally very beautiful with green hills, clean air and peace. In villages people care and help each other. Cities are normally very crowded places as compared to Villages. In the city, one might not have the privacy that one wish for. One would not be able to go outside without bumping into people. One have 10 people living in a small one room kitchen and buildings just as far away as 5 feet. This however is a total different case in the village. One might walk for miles without encountering anyone and his nearest neighbor would live miles away. The population of the entire village may not be more than a few hundred

Firstly, “The first wealth is health”, an elderly person might find life in the city to be better in the long run as there is better access to health care facilities and quick availability of round the clock emergency services. However, the kind of health care available in the city is not accessible to someone living in the village, as the village might have only a local clinic with a rural nurse available, sometimes even a doctor might not be available in the clinic. To add on to that the clinics are not equipped with the supplies necessary for an emergency, sometimes even basic medication becomes out of stock and unavailable.

Due to high populations and great amount of disposable income, almost everyone in the city has one vehicle or the other. These vehicles, in addition to other sources of pollution, add on to the already worsening atmosphere. On the other hand in the villages due to the absences of a large number of vehicles and other sources of pollution, one have abundance of fresh air and a very calm, clean and serene climatic conditions which are good for our health……

It is generally thought that country life is better than city life. It can be true for old people but city life is a necessity for young people. Also they want to entertain by doing social activities. So city life is better than country life because of its job and social opportunities. People who have just finished their education need to find a good job to live in good conditions. Big companies are always situated in cities and specifically big cities. A big company can pay more salary to its employees. So people can have good life conditions. In a country there aren’t any big companies. There are only personal shops. You can just work in a shop with a low salary. Therefore, living in a city would be better economically for people who are looking for a job.

Everyone wants to do some social activities to make their life more enjoyable. They may want to go to cinema with their family or they could want to drink something with their friends in a cafe or a bar. In countries, there are social opportunities but they’re limited. City’s opportunities are not as limited as country’s opportunities. There are many options to select. Thus, people choose cities if they want a good social life. As a result, city life could have some bad qualities. Despite its problems city’s problems city’s opportunities are attractive for who want to live an enjoyable life. Information about village life has benefits, such as access to nature, close-knit communities and a lack of noise and light pollution. Some people prefer the quiet life you can lead in villages. However, cities have many benefits over villages. As city populations increase, so do businesses. People have fast access to their needs and wants in cities. As time passes, more and more people all over the world leave villages and move to cities, seeking a new life.

For most people, yes. It is hard to say whether a particular style of living is better for any single person. But the historic evidence is clear that for the growth and expansion of civilization, urban centers are where ideas are exchanged, where most education and research happens, and where artistic and creative pursuits thrive the most. It is also where more people, proportionally, rise out of poverty compared to rural areas, which is exactly why Chinese gravitate toward their cities and away from the countryside. One has more opportunity. From an environment standpoint, cities are also denser and surprisingly better suited to deal with global warming.

Urban is better! OK urban is better because there are more job opportunities. Also, you are always moving. You never have to stop and take care of cows or horses, just your children. On top of that, you are away from everything. All of the animals like snakes, and bears, and wolfs. They are not in the city.

Advantages are present In rural areas the average crime rate is lower, and there is way less air pollution and noise pollution in such areas. People in rural communities have less contact with the outside world and thus know each other very well and associate with each other better than a pair of strangers in an urban community would. You could also appreciate nature more in rural areas, and there would be no problem with too much people and overcrowding. You also get to build your own house instead of buying one, or you could get the materials (such as wood) for free in a rural area and sell them in a urban area for money.

Positives of living in China urban areas If you live in Chinese urban areas, you will have more chance of getting employed. It is also more multi cultural living in china. You also get more wage than you do if you live in the rural areas. The cities are safer than the countryside. You also have the one child policy meaning you pay less than families with more than one child. 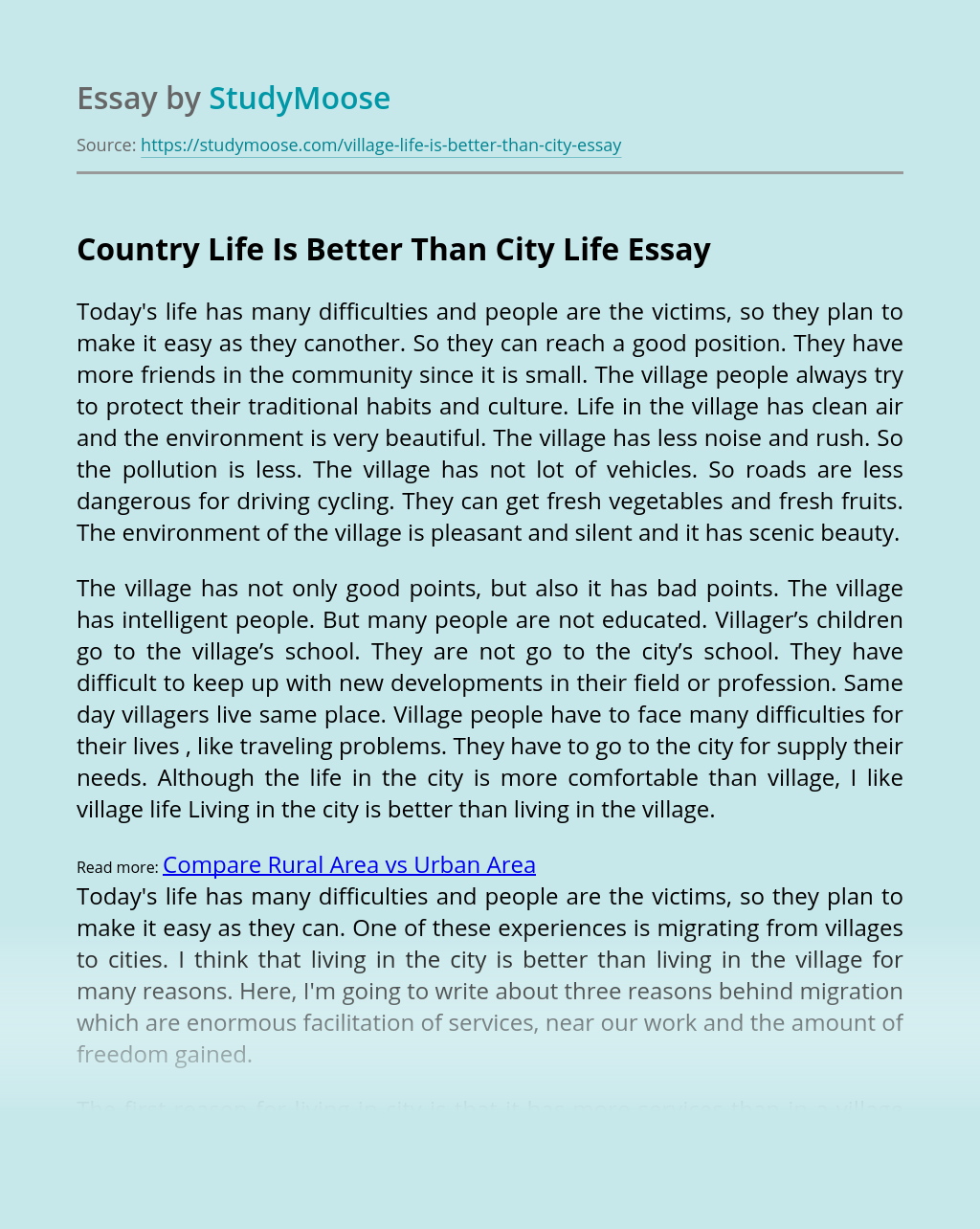