There are many different factors to overcome on why city or country living is better. There is a lot to take into consideration because they greatly differ from each other. The fact of the matter is it is a difficult question because there is no right or wrong answer. Everyone is unique and has different preferences. There are positive and negative elements of both scenarios such as the education and job opportunities, Crime and death rates, as well as the environment/lifestyle and the cost of living.

Don't use plagiarized sources. Get your custom essay on
“ City Life Vs Country Life ”
Get custom paper
NEW! smart matching with writer

Everyone has their own opinion; depending on what you prefer is what makes one “better” per say. In the city, there are a lot more opportunities in college with a wider variety of degrees and programs to study resulting in more options of fields to pursue in the future. Some of the best schools in the United States are located in the city. Schools in the city have more extracurricular activities and after school clubs because there are more students to participate making it worth holding many activities after school.

It gives students more leisure time to enjoy being active rather than going home to watch television on their free time. Job opportunities are also an advantage of living in the city, as there are many corporations, and businesses where there is a higher chance of getting hired most likely with a higher pay too. There are many different jobs fieldsto pursue in the city to fit your criteria. [M]any economists have reported that wages and job opportunities prove best in more densely populated areas.

Larger cities typically provide ample opportunities for employment and entrepreneurial ventures, particularly in niche markets (Tigro).There also could be a disadvantage of job searching in the big city, as there are more people someone else may have more experience and a better education making it harder to land a job. School systems in the country are a bit different, schools are much smaller and do not offer as many programs limiting your education. There are not as many colleges which force the students that do want more options for education to go away for school. This ultimately ends up costing much more; having to pay for housing, out of state tuition’s, and everything else that comes with living away from home.

see more:disadvantages of living in the countryside

There is indeed an advantage of education in the country,which is a smaller classroom size.This gives a better student-teacher relationship and there is more one-on-one interaction resulting in a better understanding and more knowledge towards their studies. Job descriptions and duties can be quiet different then living in the city. In the country a lot of people grow, eat, and sell their own crops and what they don’t have they can trade off with their neighbors, whom do the same. It is a common procedure done in rural areas. Being that malls, restaurants, grocery stores, and the buildings in general are significantly spread apart. There are less job opportunities available and the ones that aremost likely do not have a high pay.The work force in smaller towns may be fueled by local manufacturing plants, nearby corporate headquarters or area colleges and universities. Depending on the location and the enterprise, it could be more difficult to make a small town business profitable (Tigro). This is why some folksrely on other resources for extra funds. Money in the country is not needed as much as in the city because daily living and expenses are not as much The lifestyle/environment and cost of living of these two places greatly differ as well.

The city life is a busy, hyper and an active lifestyle where convenience is at your side most of the time compared to living in the country. Population in the city is much greater so movies, malls, restaurants, grocery stores, and other reliable sources are at easy access because there are so many. This makes it very convenient to live in the city where errands are done much faster and easier and free time activities are right on hand when desired. Public transportation is another advantage of living in the city: there are taxies, buses or train stations on almost every corner in big cities making it easier to get around if you have no means of transportation. Since a lot of places in the city are so close, traveling from place to place does not affect much time in your daily schedule making your day more efficient. To come with all of these advantages, living expenses in the city are a bit high. “[I]n many urban areas, including Washington, D.C., San Francisco, and Boston, working families often struggle to find affordable housing. Indeed, the price of housing often gets the most attention when it comes to measuring the cost of city living. Rent and housing prices tend to be significantly higher in urban locations”(Palmer).Having all of these amenities at such close reach is convenient but there is always a downfall.

In general, the cities with the lowest real estate prices per square foot were cities that have suffered from poor economic conditions for some time (Sauter). In order to live comfortably in the city, having a well-paid job is a must. The lifestyle and environment in the country has a calm, pure and peaceful scenery where everything is open, there are fewer buildings, minimum cars and people cluttering the area giving you a good sense of freedom and tranquility. Activities are very exciting and thrilling in the country also, consisting of hiking, fishing, horseback riding, four wheeling, plus many more. These fun activities can also be good for your health which is a great benefit too. Living expenses in the country are significantly less compared to the city. One individual that was reluctant to move from the city to the country says 10 years later, “My mortgage is less, taxes are less, car insurance is less, and our needs are less.” (Childs). There is less income in the country but that comes with fewer expenses. [Y]our cost of living could be 1/2 as much as it is in the city. Therefore, taking a $2-3 cut per hour isn’t such a big deal when you look at the big picture. Crime and death rates should definitely be on your check list when debating where to live, it is entirely up to an individual and what makes them more comfortable as it is something that needs to be looked at carefully, there are both advantages and disadvantages to both places. It is known that in the city there is an alarming higher crime rate. Studies demonstrate: the average annual 1993-98 violent crime rate in urban areas was about 74% higher than the rural rate.This is a disadvantage of living in an urban area in the city where crime is a lot more likely to occur to you or someone you know,this may make it uneasy to be comfortable where you live.Something to look at on the positive side is normally you have people around you for most part of your day because there are so many individuals that live in the city.

This makes it a little less likely for someone to be able to get away with something without someone seeing. Crime rates are just so much higher because there are a lot more people in the city increasing those chances. Crime rates in the country are at a comfortably low rate and for the simple fact that there is a smaller population. This is an advantage of living in the quiet rural areas having a more comfortable state of mind knowing murders, rapes, and other horrible crimes are less likely to arise in your hometown. You would assume that just as crime rates are at low number numbered in the country; deaths from injuries would be as well.Brian Howard of The National Geographic says “For years, people have moved to the country to escape the dangers of big city life.”In this article a study done by researcher Sage Myers and his team says they attempted to classify deaths from injuries “across the rural-urban continuum.” They looked at data on 1,295,919 deaths from injuries in 3,141 U.S. counties from 1999 to 2006. These deaths were caused by car accidents, shootings, falls, drowning, suffocation, and more…The researchers found that the risk of death from injury was 1.22 times higher in the most rural counties, compared with the most urban ones. Differences between the life in a city and in the country have many different options to weigh out and there is no right answer because it all depends on one’s personal opinion to decide which lifestyle is the best and how you would prefer to live. There are an extraordinary amount of advantages and disadvantages in education/job opportunities, Crime/death rates, as well as the environment/lifestyle and the cost of living of the two areas. They are both beautiful places in their own way. 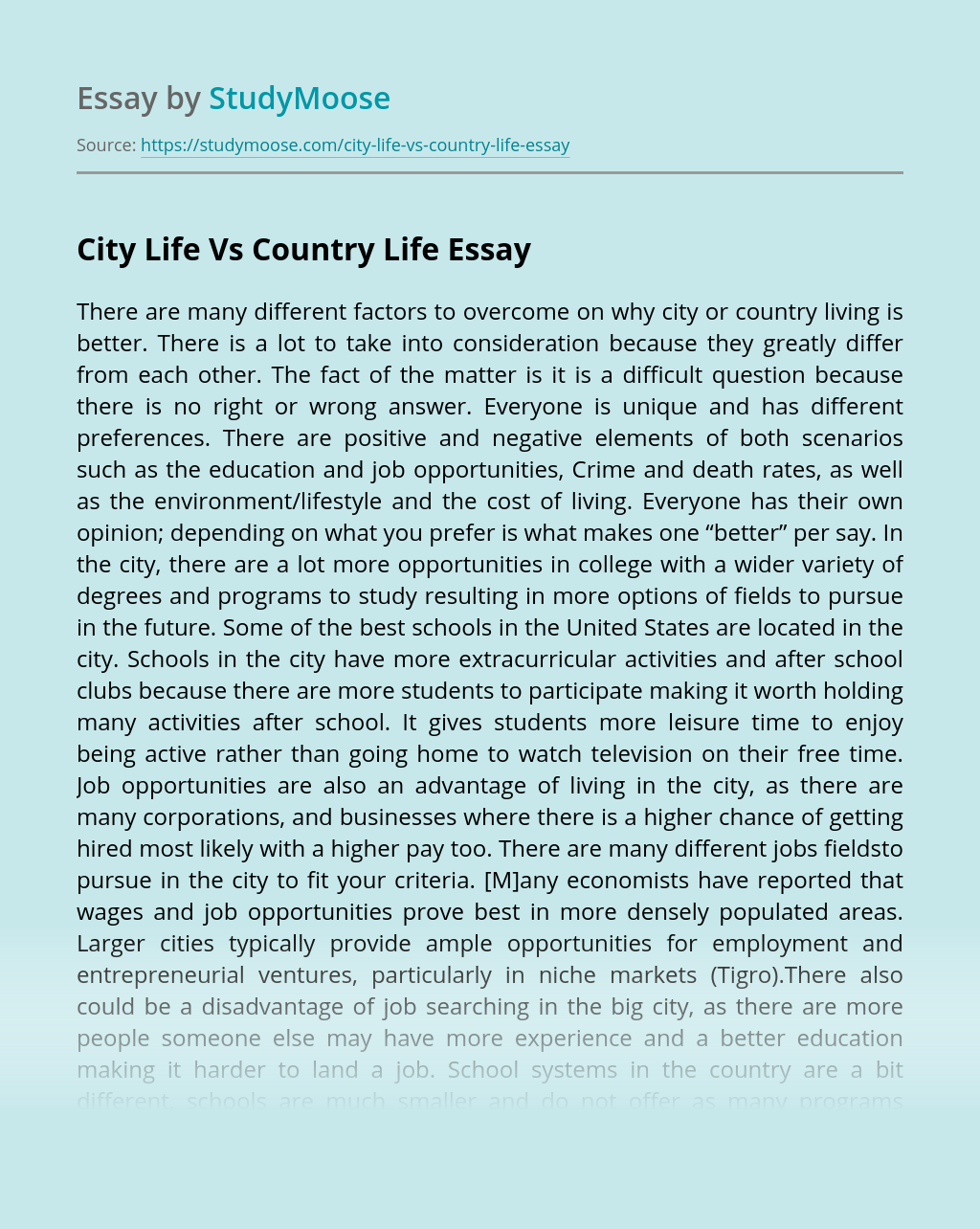