Don't use plagiarized sources. Get your custom essay on
“ From Garden City to Garbage City, Bangalore ”
Get custom paper
NEW! smart matching with writer

Listed fourth among the top 15 cities contributing to India’s overall GDP it is the country most preferred by the entrepreneurs all over the world.

Bangalore is famous as the “Garden City of India” because of its gentle climate, broad streets, greenery and the presence of public parks, such as Lal Bagh and Cubban Park. Regular flowers shows and biannual flowers shows are held at the Lal Bagh gardens during the week of Republic Day (26 January) and Independence Day (15 August) which attracts thousands of tourists from all over the world.

Recapturing my memory, twenty years ago, Bangalore was a small halli (village) surrounded by many small villages with rich fields which was the main reason for Bangalore’s salubrious and fantastic climate. Trees were planted on either sides of the roads which added to the pleasant and cool atmosphere. The roads were deprived of any kind of noise, motor vehicles and pollution. Bangalore was completely surrounded by green carpets. There were innumerable tanks, ponds and lakes all around.

All this may sound like a story but this was how wealthy Bangalore was in terms of its greenery and beauty. One would wake up listening to the chirping of birds, feel the cool and pleasant wind blow over their face. The air was pure and rejuvenating. But today Bangalore, India’s showpiece city for its salubrious climate and beautiful gardens is struggling to keep up its label of “The Garden City Of India”.

The reason behind this being the encroachment of agricultural land for industrialization, construction and development, all of which lead to unexpected, unplanned and haphazard change in the Garden City. Holocaust of trees and vegetation occurred when road widening, laying of electric and telephone lines, establishment of industries, buildings and construction of private colonies began. In less than 12 years the Garden City was converted into a globalised IT capital. All the beauty, the charm, the charisma that Bangalore once had being the Garden City of the country appears only in books and is lost in the history.

But today the scenario is topsy turvy. And my sweet memories turn bitter when I look at the scenario now. Walking down the lanes the only thing that catches one’s eye sight are the tall sky scrapers, slums, barren lands with mountains of waste and vast stretches of colonies. There is rarely any patch of greenery left on the grounds of a city which was once called the Pensioners ‘Paradise’. BBMP (Bruhat Bengaluru Mahanagara Palike or Greater Bangalore City Corporation) is responsible for the safe disposable of the tonnes of waste generated by the city’s residents.

Karnataka’s capital city generates more than 4500 tonnes of garbage everyday which is transported to the outskirts of the city to the landfills of Doddaballapur, Mandur and Mavallipura. The committees around these areas have borne the brunt of the city’s garbage, poisoning their environment and succumbing to innumerable diseases. With the unavailability of any further landfills, and the negligence by the BBMP, Bangaloreans have begun to dump the erratic garbage collection along the road sides. All this is a by- product of the ‘use and throw’ culture. Even the road dividers are not spared. The drains, the pot-holes are over- flowing with the wastes. All this is turning into a grave environmental and public hazard. Animals are dying on a large scale by consuming plastic instead of grass, there is widespread of epidemic among the flora and fauna, climatic conditions, rainfall pattern are getting disturbed.

The root cause of the problem begins at household where people fail to segregate the wet(organic) and dry(inorganic) waste. This adds to the burden of spending additional money in segregation. The other culprit has been the nexus between the civil Government and the private contractors who have failed in their obligation to manage and collect the waste on time. To curtail the situation BBMP had announced mandatory dry and wet waste segregation for every household. But people’s negligence forced the BBMP to withdraw its order. A feverish hunt is on for hundreds of acres of land to accommodate the 5000 odd tonnes of garbage generated daily by the city’s eight million population. People blame the contractors and the BBMP for not giving timely service to them and the authorities blame the general public for not taking interest in waste segregation at their home. The blame game is on. It is not that the BBMP has insufficient technology or incapability to handle the waste.

Both the local public and the Government should cooperate and hold hands with each other during such a crisis. Tieing up with NGOs and private firms to turn the waste into energy or manure is one such measure to help tackle this problem. Setting up of biogas plants to treat the waste into compost, regular collection and picking up of waste, educating the masses can act as the anchor for BBMP’s sinking ship.

The city once called the Garden city is in knee- deep trash today. The tree population is only 17 per 100 people. 74% of the city’s lakes and 66% of the city’s vegetation has been stripped off in the last few years. The sad and bitter truth is that garbage has replaced greenery. It high time that the new Government finds a permanent solution to this garbage menace and bring back the green tag and to prevent “Brand Bangalore” from getting buried in the mounds of stinking and filthy garbage. 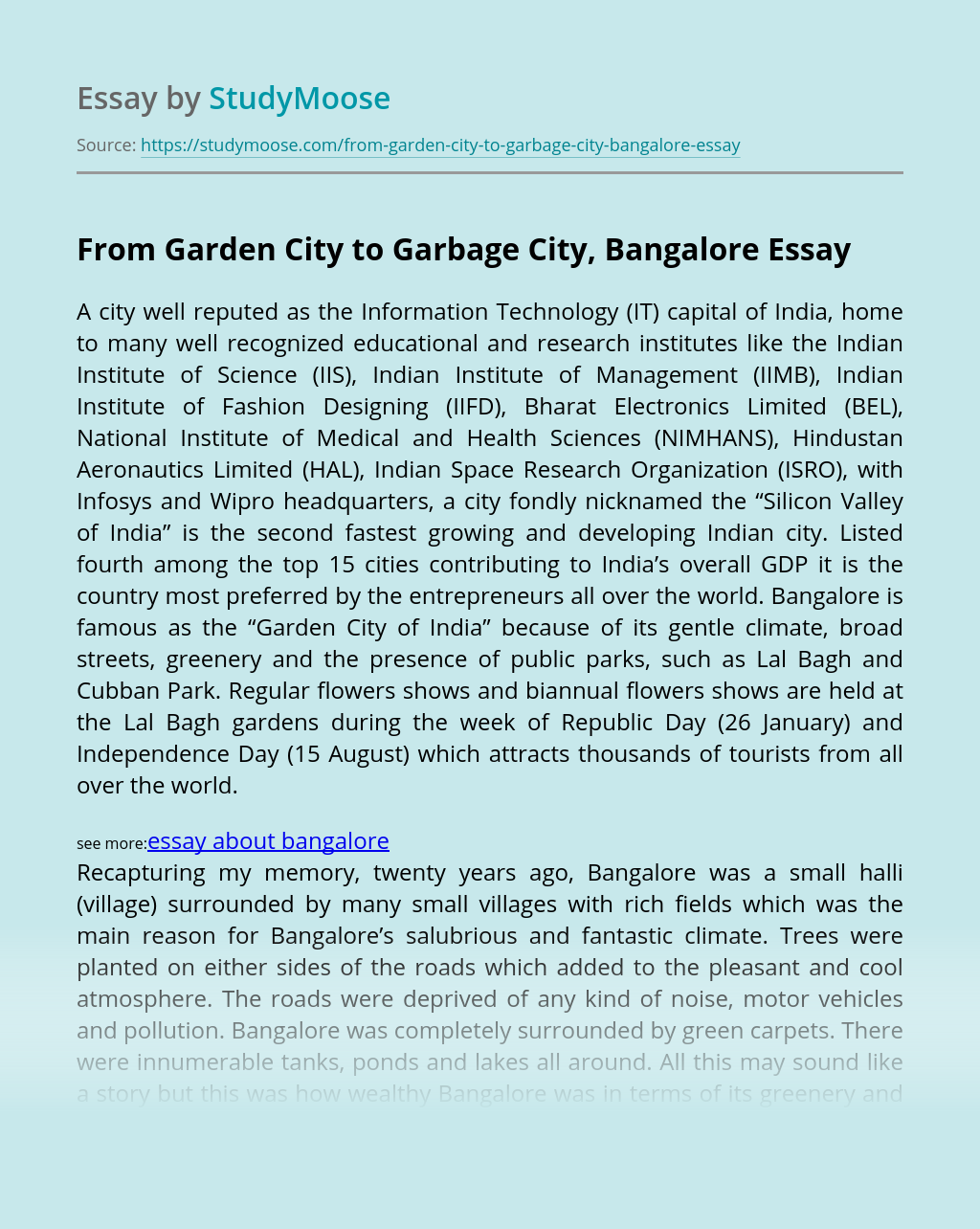