Walking on any beach these days, you’re sure to find at least some form of plastic on the shoreline. Granted, there’s a lot of other stuff floating out in the sea, but unlike natural materials, plastic doesn’t degrade normally. Plastic bottles, containers, foam pieces made from polyurethane, and fishing lines are showing up in whole or pieces, and are getting dissolved into the water, to be absorbed by plankton. So much plastic has taken over our oceans, in fact, that in the middle of the North Pacific Ocean, there is a gathering of plastic, debris and toxins twice the size of Texas (Casey, 2007) affectionately dubbed the Great Pacific Garbage Patch.

Don't use plagiarized sources. Get your custom essay on
“ The Great Pacific Garbage Patch ”
Get custom paper
NEW! smart matching with writer

The reason for this large amassed garbage pile in the middle of the ocean is because of the flow of the tides, and in the center there is a slow clockwise spiral that has collected the trash (Greenpeace, 2008). All this plastic wouldn’t be such a problem if it didn’t have any harmful effects, but seabirds and other animals are swallowing it misconceiving it as prey.

Plastic also has an innate ability to soak up chemicals, which in turn is getting into the animals and poisoning them (Greenpeace, 2008). Organisms are also finding their way onto these floating pieces and traveling outside of their normal habitat, and they are becoming an influence on an environment that previously wasn’t exposed to them (Greenpeace, 2008).

Even though most plastic floats, nearly 70 percent of the plastic accumulated in the ocean is on its floor, blanketing the organisms and plants below.

Dutch Scientists have deduced that based on the 110 pieces of litter they found per square kilometer of seabed, there would be approximately 600,000 tons in the North Sea alone (Kostigen, 2008). Captain Charles Moore from the Algalita Marine Research foundation suggests that plastic is now outnumbering zooplankton 6 to 1 (Kostigen, 2008). The plastic and its toxins continue up the food chain until it gets into the food we eat.

We consume and throw away in our “throw-away society”, plastic and whatever else is disposable. From some of the research that Charles Moore conducted, a hypothesis could be put forth that suggests that all food in the ocean contains plastics. Most don’t seem to care because the ocean is far away from them, and don’t see the immediate effects of our pollution. So that brings us to the ultimate question of what to do about this huge mess, or why should we even care?

Alexandra Cousteau, granddaughter of Jacques Cousteau, reminds us how closely we are linked to the oceans. “We live on a water planet.” She says. “Water is life” (Kostigen, 2007). With everything we consume, it all touches a water source some way along the line, so what we do to our environment, we are, in fact, doing directly back to ourselves. In 2003, the United States generated 26,650 tons of plastic waste (De Cassis, 2008). With all this plastic being used in nearly everything these days, it’s a challenge to even consider an alternative, but there are some out there.

Plastics, instead of using petroleum, can be made from corn. A company called NatureWorks, which so happens to be the largest lactic-acid plant in the world, is taking corn and turning it into industrial resin pellets also referred to as PLA, which can then be turned into a sort of plastic (Royte, 2006). Walmart has invested in this environmentally sound replacement, and plans to use 114 million PLA containers a year, saving nearly 800,000 barrels of oil along with it (Royte, 2006).

Could this be the missing miracle we’ve overlooked all this time? No, it’s not quite there. There are drawbacks to using this green product, and it is primarily from the decomposition process. PLA is said to decompose into carbon dioxide and water in a controlled composting environment in less than 90 days (Royte, 2006), but in reality it takes a special facility where they take the compost, and keep it at 140 degrees for ten consecutive days. That still makes it a better alternative because it actually has a means of biodegrading, unlike plastic, but it doesn’t quite seem to be the end all of solutions.

Another proposed solution to the problem is harvesting plastic-eating microbes to consume the plastic. Daniel Burd of Ontario, Canada, discovered this unique approach by conducting an experiment to see if he could dissolve a plastic bag over several months. The bag broke down nearly 43% in six weeks (Danigelis, 2008). With further research, it may be possible to harness the use of these microbes, but they really haven’t been tested outside of the parameters of Daniel’s experiment on how they may effect the environment. What excess do the microbes exhume? Is it possible they could be airborne and spread unknowingly to degrade plastic that wasn’t intended to be? It also could be an intelligent solution to the world’s plastic problem, but surely there needs to be more research to the matter before implementing the solution.

Whatever we decide upon, we need to stick to it. Our precious Earth is being covered with plastic, more and more every day. Word of mouth from the internet is spreading to people regarding the research that people like Daniel Burd and Charles Moore have done, but it’s not enough. Out of some of the possible solutions I’ve found, utilizing alternatives to plastic seems to be the most feasible at this point, and I believe that’s the direction we should be heading towards. If we are going to fix this problem for good, there needs to be awareness, action, and change. 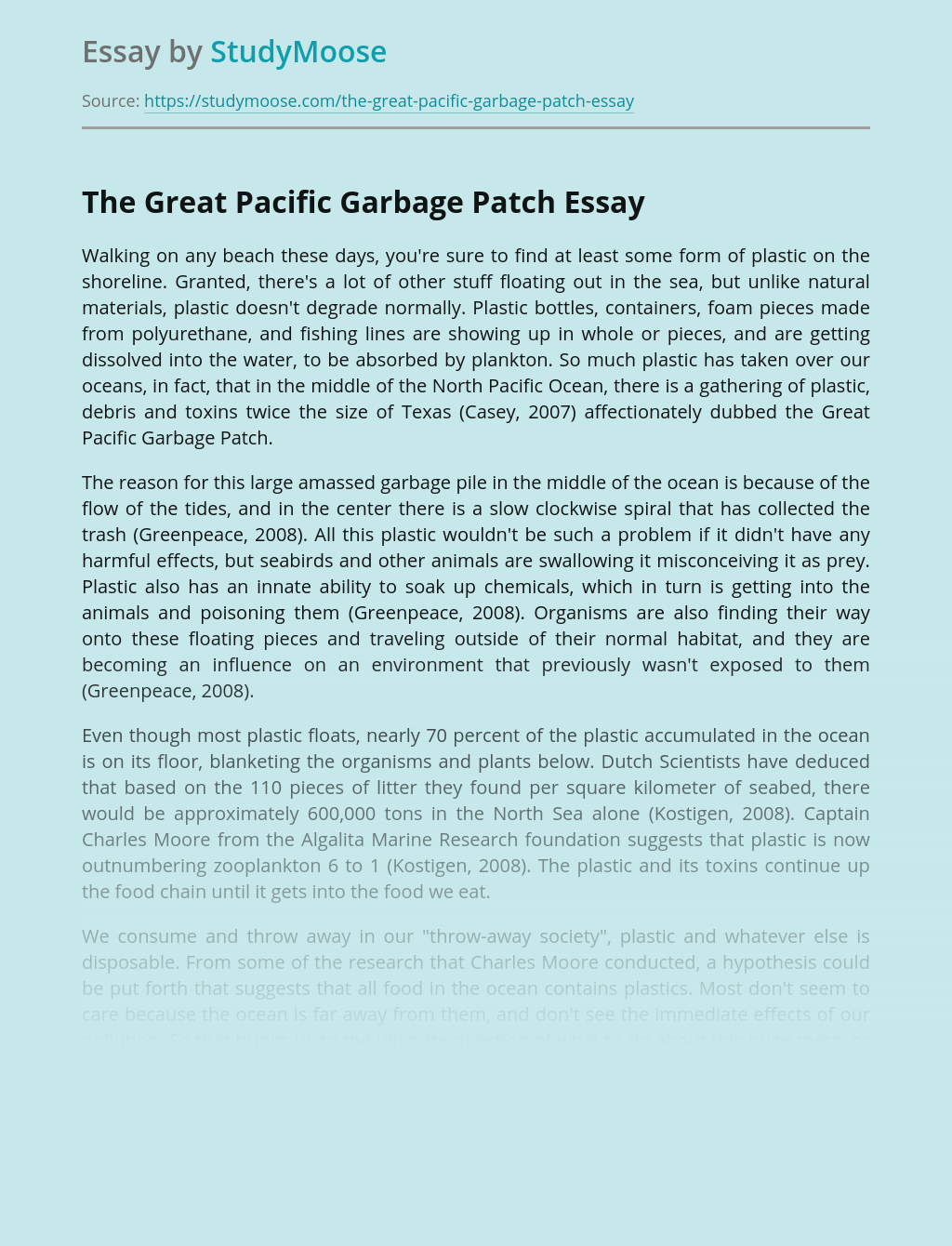