Life in a Village or a City?

Well, there is no doubt that life in villages is so beautiful, and very interesting indeed, but at the same we find that there are people who prefer to live in metropolitan cities and this is due to their lust of living in a modernized lifestyle. Anyway, to understand how these two different lifestyles differ, I will start by defining each lifestyle, therefore as to make it easy to understand the differences between them.

LIVING IN A VILLAGE
Many people tend to like this kind of a living, as it is a lifestyle which can be adored easily and thus it is believed that living in a village brings harmony and peace to yr mind.

Don't use plagiarized sources. Get your custom essay on
“ Life in a Village or a City? ”
Get custom paper
NEW! smart matching with writer

It is thoroughly known that a village is a place where communities dwell together, and this makes them know each other. In villages, people indulge themselves in many activities for a living, but mostly they farm, they keep tamed animals, and they even have poultry. This is because of most villages are far away from towns and cities.

Anyway, in some places villages tend to be near some rivers or streams, thus making the villagers become fishermen as a way of a living. What makes living in a village so beautiful is the idea of living a lifestyle which is somehow primitive, but yet so healthy, because the environment there is not polluted, and the air is so fresh and full of pure oxygen. In villages people wake up early, as they sleep early. Early in the morning you hear the sounds of birds singing on trees, and the breezing winds whistle while they touch the leaves of the trees.

Goats and cows graze the nearby prairies, or the grassy hills, while ducks and chickens roam around trying to find the morning worms in the warm soils. It is amazingly beautiful to just hear the sounds of nature around you. The other thing is that villagers tend to be more healthier than people who live in towns and cities, because the food they consume is basically from the crops they grow, so all the foods in villages are fresh and healthy. In villages, technology is something not commonly in use, as people stay in touch through being close to each other. At night , they stay together with a lamp, and old people tell the younger ones stories, till its time to go bed. Sometimes the only means of news is through the radio. The radio is the most commonly used technology amongst many villagers. Anyway, living in a village is something so beautiful and very sweet as it reminds you of how people used to live long time ago.

LIVING IN A CITY

Well, nowadays many people live in towns and cities, and this is mainly because of the search for better work opportunities. It is obvious that in cities life is very hard, tough and very stressful, and this is because of the metropolitan way of lifestyle. In cities, people don’t know each other, as it is obviously known that cities are dwelling places for hundreds of thousands of people and in some cities millions . So this makes it hard for people to know each other in such an environment. People in cities are always seen to be busy as life there is like that. Stress and hypertension are very common among people who live in cities, and this is because of the long working hours. However, technology, in cities is a common thing as people their tend to be a normal thing and everywhere they go they find themselves within these technologies, i.e., in schools, banks, working places e.t.c. Somehow, this is a nice thing as it is well known that technology makes things be easier and faster. The other thing which is very common in a city lifestyle, is the need for faster foods, as many food outlets there are in the service of providing such kinds of foods, but on the other hand, these kinds of foods are well known for the negative setbacks as we all know that these foods are tremendously unhealthy.

Pollution is also a big problem there, fumes of poisonous gases coming from industries, and cars also play a role for the environment to be polluted. So this brings the lack of pure fresh air roaming around, and therefore many dangerous lung diseases become common to many city dwellers. Noise is also a big problem for people living in cities, the sounds of jam traffics and noisy industries are very common in cities. Anyway, we all know that cities are places where education is on high peaks, because the level of education in cities is based on high technologies. There are also things which are good in this kind of a lifestyle, there are many luxurious things to do, like in the entertainment fields. Cinemas, beautiful parks, fun places, and many other things which are very common in cities.

WHERE I PREFER TO LIVE

Well, truly speaking I prefer living in a village, because am the kind of a person who likes the sounds of nature, and the easy way of a lifestyle, and the reason is that I don’t like living in crowded places and the noisy sounds of cars and industries. Anyway, this is what I prefer and I know that many others prefer living in cities. 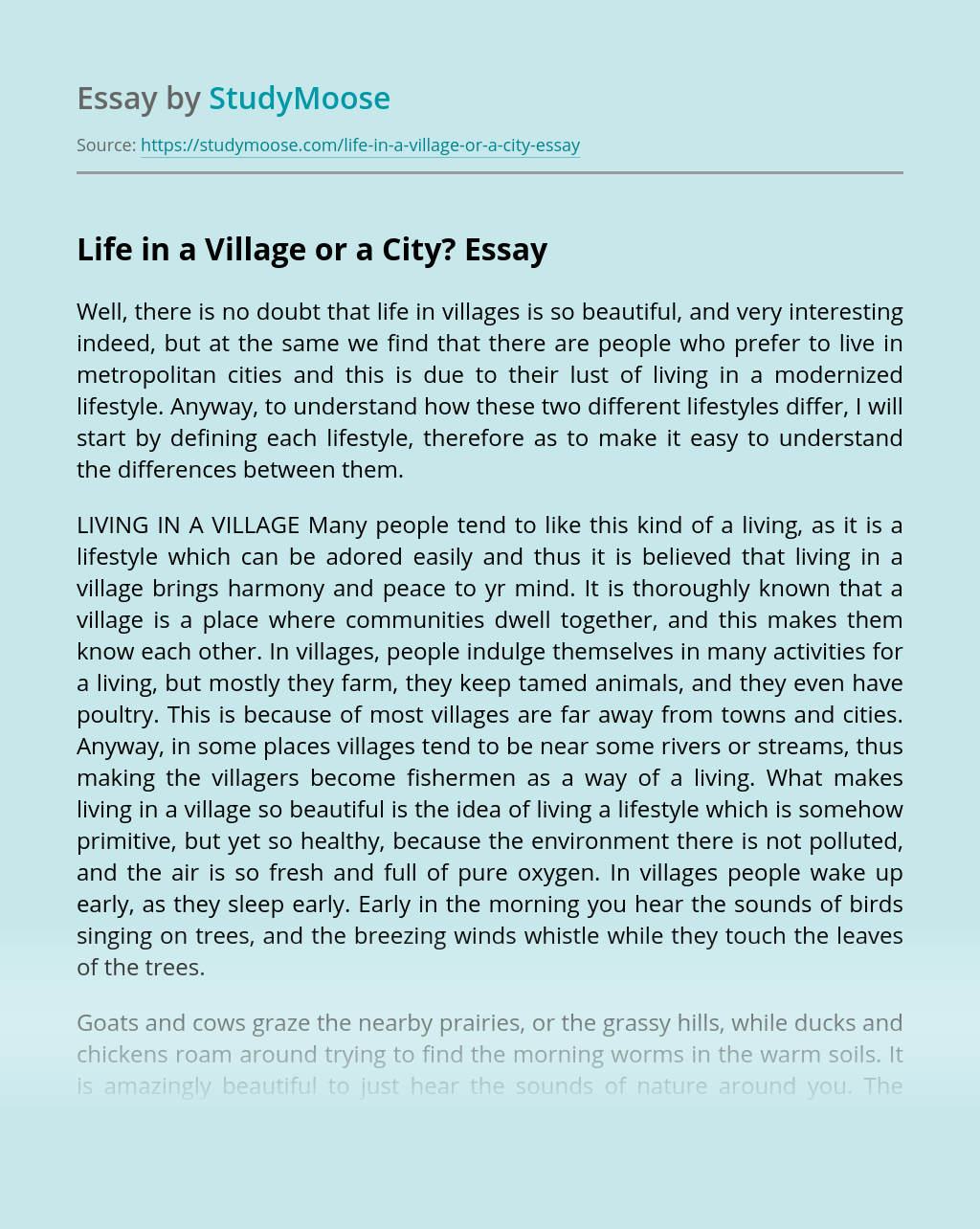