Tolerance Is the Strength of Society

Categories: Freedom Of ReligionIslamPoliticsReligionSocietyStrengthsTolerance
Download paper
Download
Essay, Pages 3 (524 words)
Views
1683
Tolerance is a sense of willingness to accept behavior and beliefs which are contrary to one’s own. While the disagreement to one’s thoughts, beliefs and ideology is considered as intolerance and it leads to confrontations and rivalry. Intolerance is on the increase in the world today, causing death, genocide, violence, religious persecution as well as confrontations on different levels. Sometimes it is racial and ethnic, sometimes it is religious and ideological, other times it is political and social.In every situation it is evil and painful ultimately paving way of social instability.
Turn in your highest-quality paper
Get a qualified writer to help you with
“ Tolerance Is the Strength of Society ”
Get high-quality paper
NEW! AI matching with writer

A person is a unit of society. So, personal behavior plays a significant part in over all social portfolios. Human behaviors shape a society. The strength of society lies in cooperation, coordination and toleration. In public affairs, in the rebuilding of society, something less dramatic and emotional is needed, namely tolerance. All religions of the world stress upon tolerance and forgiveness. Islam is a religion of affection, fraternity and endurance.

Proficient in: Freedom Of Religion

According to Islam, Literally the word “tolerance” means “to bear. ” As a concept it means “respect, acceptance and appreciation of the rich diversity of the world’s cultures, forms of expression and ways of being human. ” Tolerance is a basic principle of Islam. It is a religious moral duty. It does not mean “concession, condescension or indulgence. ” It does not mean lack of principles, or lack of seriousness about one’s principles. Islam emphasizes the establishment of equality and justice, both of these values cannot be established without some degree of tolerance.

Islam recognized from the very beginning the principle of freedom of belief or freedom of religion. Respecting one’s another belief is the real strength of society. The UNESCO principles on tolerance say: “Consistent with respect for human rights, the practice of tolerance does not mean toleration of social injustice or the abandonment or weakening of one’s convictions. It means that one is free to adhere to one’s own convictions and accepts that others adhere to theirs. The burning issue with special regard to Pakistan is social and religious sectarianism and provincialism.

Sectarianism has undermined the society. The people don’t have a soft corner for others. Social instability is a persistent threat to sovereignty of the state. The war against terror, which has caused an un-recoverable loss to Pakistan, is also a result of intolerance. This is the war which is going on by its own inertia without defined goals that is merely intolerance. How can we solve the problem of intolerance? How can we bring tolerance into the world today? How can we strengthen the society today?

Human equity, fundamental freedom of thought and conscience and belief are the keys to fight intolerance. Need is to understand one’s emotions, ideology, necessities and to respond accordingly. Gorge Eliot says “The responsibility of tolerance lies with those who have the wider vision”. And education is an only tool to make the vision wide. As Helen Keller says “The highest result of education is tolerance” Conclusively, Quality education and uniform distribution of resources propagate the sense of tolerance in the society and it ultimately ensures the strength of a society.

Tolerance Is the Strength of Society. (2021, Jul 03). Retrieved from https://studymoose.com/tolerance-is-the-strength-of-society-essay 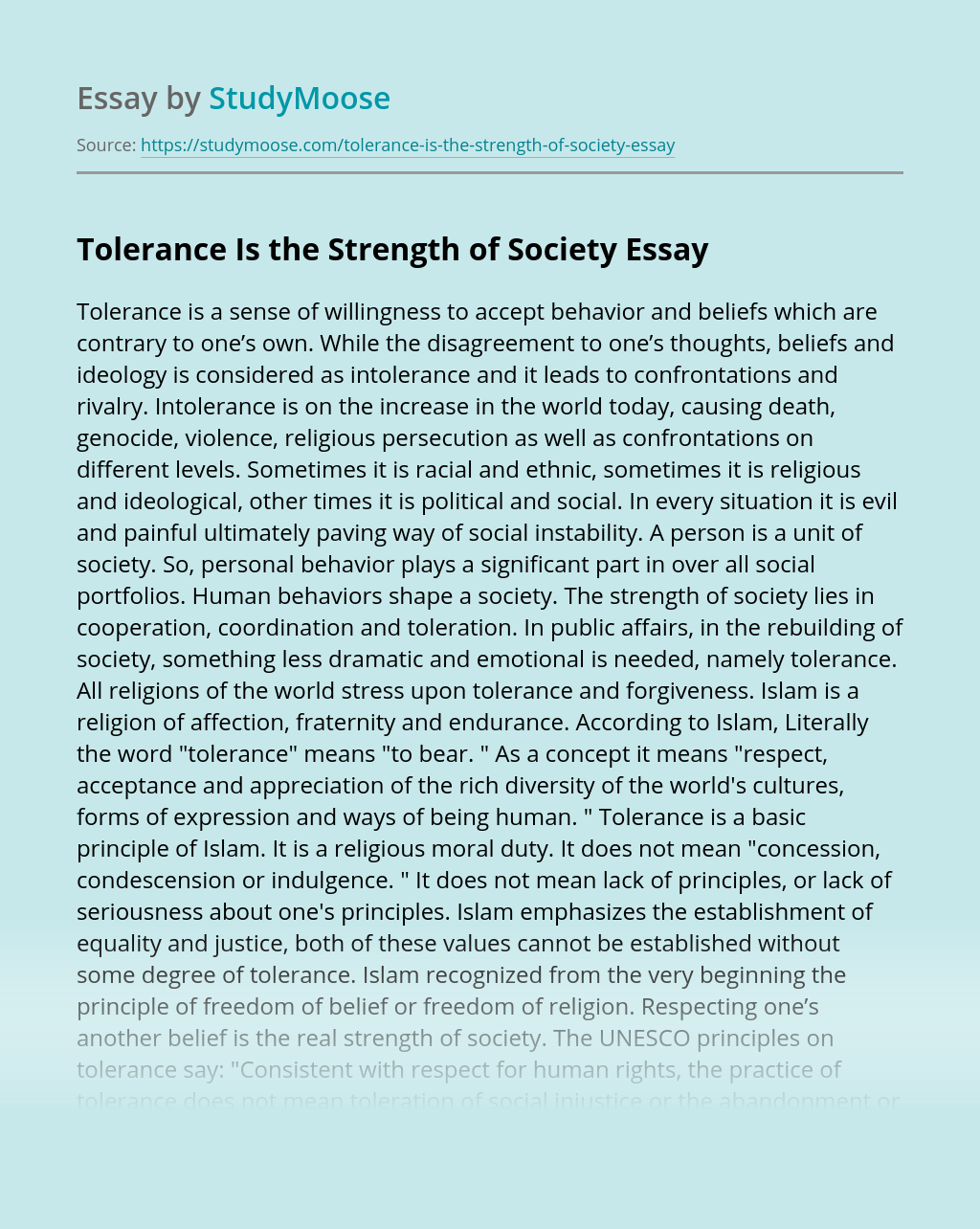 Turn in your highest-quality paper
Get a qualified writer to help you with
“ Tolerance Is the Strength of Society ”
Get high-quality paper
Helping students since 2015
Stay Safe, Stay Original