Summary of I Have a Dream Speech

It’s a sunny summer day and there are thousands of people marching down the street, all joining together for one cause. Suddenly a man steps out of the crowd, and turns towards an assortment of people in the audience. August 28th, 1963 will mark the pages of history as one of the greatest speeches ever told. From the steps of Lincoln Memorial in Washington D.C., Dr. King’s I Have a Dream speech delivered a monumental demonstration for the freedom and equality of African Americans.

Don't use plagiarized sources.
Get Your Custom Essay on Summary of I Have a Dream Speech Just from $13,9/Page

This is a summary of Dr. Martin Luther King Jr.’s I Have a Dream speech.

A great American signed into law the Emancipation Proclamation, which came to the African American slaves as though there was light at the end of the tunnel of their captivity. The Constitution and Declaration of Independence were words of honor, to every American; that all men, regardless of color, were created equal. However, one hundred years later, African Americans are not free from the torment of segregation and discrimination.

America needs to recognize the importance of the matter set forth, time is of the essence. People will not go back to life as normal in America until African Americans are granted their citizenship rights. African Americans will not stop fighting for their freedom and equality until satisfied. Dr. King says to his people, “let us not seek to satisfy our thirst for freedom by drinking from the cup of bitterness and hatred.” No one shall commit any wrongful doings while fighting for justice and equality. Keep to the standards of dignity and discipline.

Dr. King has tremendous hope for African Americans. He carries a heart full of faith that one day will turn into today. One day all people will be able to join hands and sing together with new meaning a patriotic song. Freedom will one day have true meaning, and all Americans will join together in brotherhood and live together in peace and harmony. If America is to become a great country, its promise must be fulfilled.

Dr. King’s fight and struggle for African Americans is a monumental moment in our nations history. His dedication to fight for freedom and equality was very inspirational. He demonstrates to fight for justice and to never lose faith that one day, your fight and struggle will serve a purpose. Living over fifty years later, I see what tremendous milestones America has made and what tremendous effect Dr. King’s type of demonstration has made. I believe America has come a long way and I am proud to say that I belong to this great nation of equality and freedom.

Summary of I Have a Dream Speech. (2017, Feb 09). Retrieved from https://studymoose.com/summary-of-i-have-a-dream-speech-essay 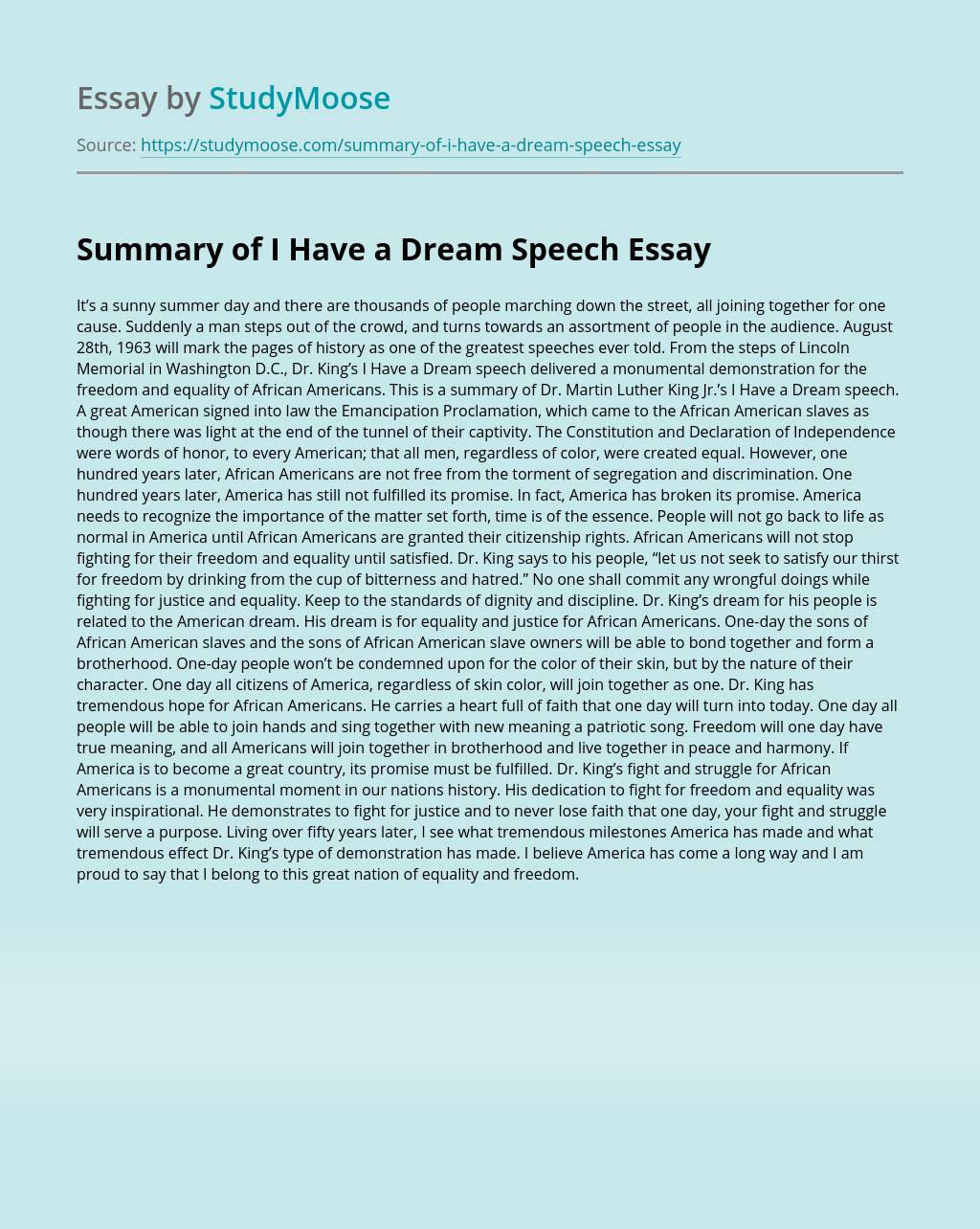 Ethanoic acid is non-toxic and is a weak acid [4], meaning it will not do any damage to most surfaces as it does not corrode or bind to other metals, therefore can be easily removed through washing or rinsing it [2]. Disadvantages:

Filipino Philosophy is the attitude, worldview, and notion of the natural citizens of the Philippines towards the day-to-day experiences in life, religion, communication, survival, interrelationship with people and intra-relationship with his sakop or to oneself – the “I,” and the uplifting of one’s soul – the Filipino being. Filipinos are used to be stereotyped as...

View sample
Get Essay
Should Schools Have Uniforms

Most high school trainees are teenagers. They are no longer kids, but they still are not grownups. Hence, they frequently wish to use newest fad clothes when they go to schools. Nevertheless, I prefer the idea that they should be required to use uniforms. First off, uniform is one of the very best features of...

View sample
Discipline by spanking your children is not Abuse

In an ideal world, spanking would never be necessary. However, on rare occasions it may be necessary to smack your child’s bottom. I do not intend to either promote or discourage spanking, but rather to give parents correct instruction on using non-abusive spanking in discipline. Spanking is a much-debated topic. Most child psychologists do not...

Chief executive officer is the most important figure in strategic management process. Don't use plagiarized sources. Get Your Custom Essay on Summary of I Have a Dream Speech Just from $13,9/Page Get custom paper S/he plays many roles in an organization. Planning, organizing,leading, and controlling are the major parts of management activities that amanager performs....