An analysis of the conventions the soap opera genre

In this essay I intend to explore the genre of Soap Opera and some of the conventions that determine the genre. The Soap Opera genre is defined as “A serialized drama usually dealing with domestic problems”. Eastenders and Coronation Street are prime examples of the Genre. Soap Operas originated in America in the late 1950’s and started being shown in England in the late 1960’s. Soap Operas are named after the sponsors of the shows were Soap Products. These shows were a marketing strategy to sell the soap products.

Don't use plagiarized sources. Get your custom essay on
“ An analysis of the conventions the soap opera genre ”
Get custom paper
NEW! smart matching with writer

The ratings for the 2 Soap Operas mentioned are constantly at the top of the list. The ratings for particular episodes in which a story line is thickening have been up to 10 million viewers watching one episode. Increasing popularity in this genre has provided a phenomenon in spin-off products such as magazines devoted to the soaps. Actors and actresses are becoming celebrities and are appearing on talk shows because of their increasing popularity.

The Soap Opera Genre has it’s own identifiable conventions, some of which will be explored.

My particular soap that I will be analyzing is Eastenders. The episode that I will be analyzing is the episode on Monday 25th of November 2002. The time this episode was on TV was 8:00pm. Eastenders has a great slot in the channel schedule. Prime time t. v. is from 7-9pm and Eastenders’ popularity has also come from the time it is broadcast. The episode is half an hour long. This soap opera is shown before the watershed, which means there are certain things, which cannot be shown.

There is never any swearing and hardly any violence used.

I selected this soap because it has been going on for over 30 years and is one of the most popular soaps in England. The story lines that are used in this episode are: Phil Mitchell wants to find out what the postcard from Lisa says. Laura and the Doctor are having a meeting to find who wrote the poison pen letters. In the scenes that I will be focusing on the conventions of character will now be explored. There are mostly characters that have a history and meaning they are more rounded characters. There are 2 or 3 stereotype characters.

Phil Mitchell is a very aggressive person that few people like. When people that he doesn’t like tell him what to do he gets angry and threatens them and doesn’t care what trouble he can get in. When he talked to someone about a postcard that had been sent from Lisa he was very aggressive and demanded to read it. The other man said no and told him to stop interfering with his life. Phil told him maybe he would maybe he wouldn’t. He does what ever he wants and doesn’t care who he tramples along the way. He loves his mother and protects her. He thinks that he can control everybody in the square.

He has got into trouble with the police before and is a recovering alcoholic. He has 2 children and when with them he is made to look as if he such a soft character and a loving father rather than what he is everywhere else. Different camera shots are used when filming Phil to make him look powerful and menacing. He is filmed to look as if he is more powerful than anybody else in the same room. He is one of the main characters of Eastenders and is there to cause trouble and tension in the soap. I will now analyze my chosen 5 minutes where there is tension and many conventions used.

The 5 minutes that I have chosen are where some of the people from the square are having a meeting to try and find who is writing poison pen letters. As the tension builds up the scene changes to the pub breaking the tension and prolonging you from knowing what was going to come if the scene hadn’t been changed. The camera shots used only show 1 or 2 people’s faces to let the viewer see the facial expression of the person. When the scene changes to the pub the camera shots change and a panning shot is used to distinguish who is in the pub.

The shot stops to people having conversations in the pub. When the scene changes you can see the lighting is different. It gets darker but there is enough light to see the people and their expressions. The camera focuses in on one of the people when they have something to say. The camera at the beginning of the scene turns around showing all the people in the room but from then on the camera doesn’t turn but cuts from person to person. As the scene gets to the end someone is walking in to the room hearing something that shouldn’t have been heard.

This gives the effect of the people being caught out and the person who wouldn’t normally be in this situation the person who caught them out. I think that Soap Operas will be an important part in the TV industry for many years because it has domestic issues and provides entertainment for a whole variety of people and for most age groups. It will also be popular because it opens up many conversations on suggested story lines and what will happen next in the next episode. The soap opera has become more than a marketing strategy for selling soaps.

An analysis of the conventions the soap opera genre. (2017, Aug 10). Retrieved from https://studymoose.com/an-analysis-of-the-conventions-the-soap-opera-genre-essay 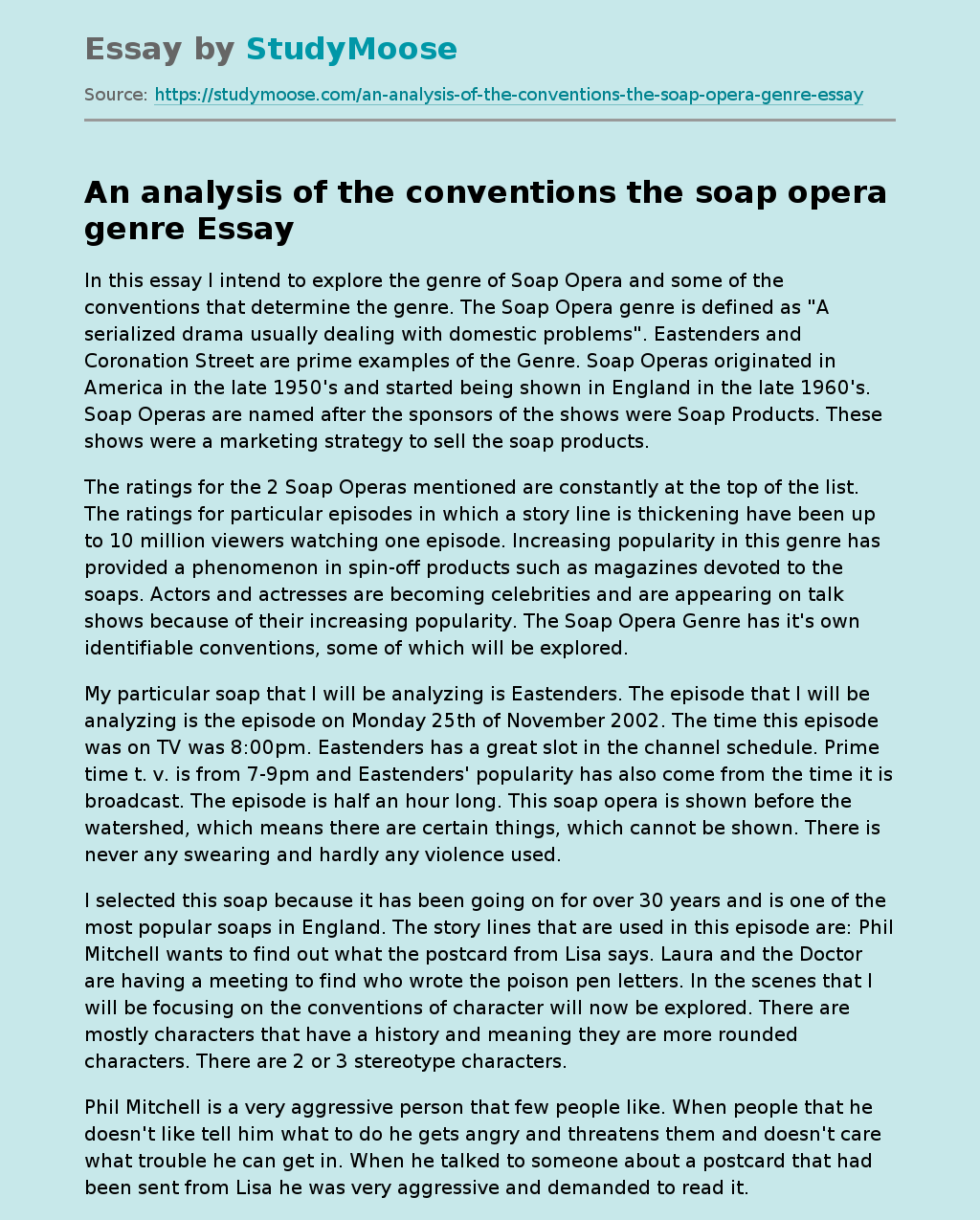