What makes a good soap opera?

EastEnders is a soap opera which has been running for a considerable amount of time, more than 18 years. A soap opera, or a ‘soap’ is called this because when ‘soaps’ began in America as radio plays many years ago all of the adverts during the breaks of the plays were for soap powders, or cleaning products, and are therefore these dramas are referred to as soaps. EastEnders is set in a place called Walford; Walford is derived from Walthamstow and Ilford, two parts of the east end.

Don't use plagiarized sources. Get your custom essay on
“ What makes a good soap opera? ”
Get custom paper
NEW! smart matching with writer

Soap operas are now a part of many people’s lives, but what makes a good soap opera? EastEnders is a very popular soap, it is simply recognisable from the opening theme tune; almost everybody would recognise the theme tune just from the three drum beats at the start of the tune. The opening credits do not appear until the acting itself begins, after the starting sequence. The starting sequence consists of a street map of London, with The River Thames in the centre of the picture, and large lettering also in the centre of the screen reading; EastEnders.

Rapid scene changes make EastEnders popular, as there can be many different storylines happening at the same time, and therefore enables more characters to be a part of the show and keep it fresh and interesting and also more action into a thirty minute episode. Although there were many scene changes, the plot was still very simple and undemanding viewing, which is a great strength of EastEnders as people want to come home from work, and relax and don’t want anything too ‘heavy’ to watch.

Locations are another important thing in the making of a good soap opera, in Eastenders there are two different types of scenes, public and private, the public scenes generally take place in the market place or the pub, The Queen Victoria whereas the private scences are usually situated in character’s homes. The audience watches the public scenes and it makes them feel a part of Albert Square and the private scenes make the viewers want to know more, and keep them ‘glued’ to their screens.

In EastEnders there are often many storylines all running at once, making it seem more realistic and more action happening, especially when the two or more story lines ‘meet’ and form a main, important storyline; there are normally two or three main storylines happening at once which generally get more programme time. At the ending of this episode there is a cliff hanger, Sam comes home after a holiday and sees Kate and Phil together, and exclaims “What the hell is she doing here?

” this leaves the audience in suspense, it also makes sure that the audience will watch the next episode, as they will want to see what happens, creating people wanting to watch the next episode and keeping viewing figures high. There are many clusters of characters in this episode which are focused on, for example the main storylines at the moment contain Phil and Kate’s relationship, and how they are keeping it secret, also Martin has just got out of jail and has work problems.

There are also other less important storylines; for example Sonia and Guss in a relationship and Kat giving Alfie a makeover. EastEnders is not very realistic in my opinion, because compared to the real East end there are not enough ethnic minorities, and the characters on EastEnders would not be able to afford the houses they live in comparison to their jobs.

Although some things are realistic for example the characters occupations, publican and cab driver, and some of the characters played by the actors are very believable, and you could imagine them as a real person living in the east end. Eastenders often deals with moral issues, where the viewer is able to take sides and decide who is right and who is wrong, the viewer can be influenced by many things to take a characters side, past experience as EastEnders deals with everyday situations, and previous knowledge of the character could also influence the viewers choice.

By dealing with every day issues EastEnders teaches us many things and may even help to socialise younger people. EastEnders is very popular due to all of the points mentioned, but also because of constant new characters being added to the soap for example The Feraras, this keeps the programme fresh and allows many different things to take place. EastEnders also changes with the times therefore making it appeal to all generations.

What makes a good soap opera?. (2017, Sep 13). Retrieved from https://studymoose.com/what-makes-a-good-soap-opera-2-essay 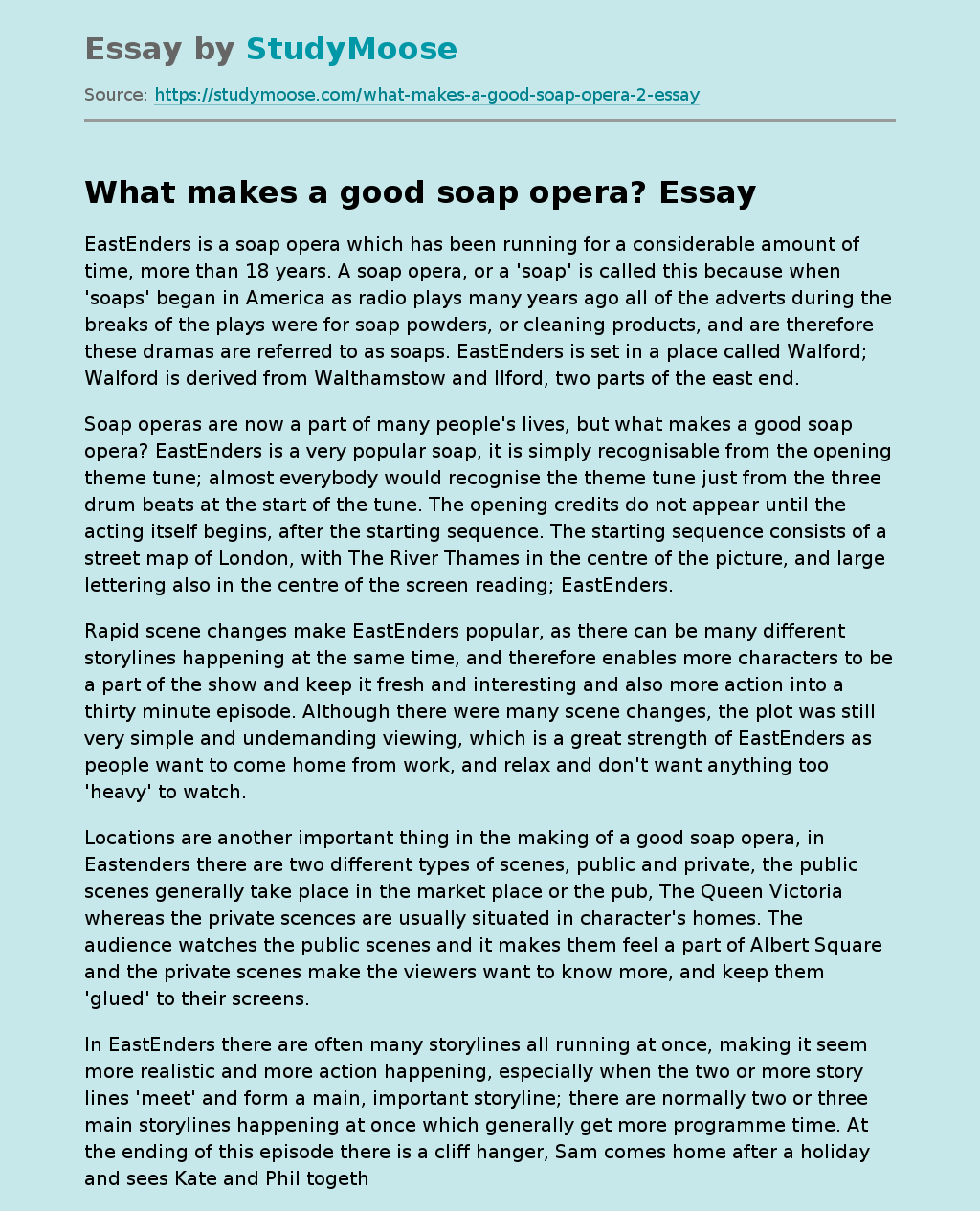