Based on the French novel D’Entre les Morts by Pierre Boileau and Thomas Narcejac, Vertigo is arguably one of Alfred Hitchcock’s masterpieces and the “strangest, yet most hauntingly beautiful film he had ever made” (Adair, 2002). At the time, its far-fetched plot drew a mixed response from critics – Time magazine called the movie a “Hitchcock and bull story” – but today most agree that it is one of the director’s most deeply felt pictures.

Vertigo very easily categorized into a specific genre – Thriller, a genre of movies that, in many ways, Hitchcock played a major role in defining.

Don't use plagiarized sources. Get your custom essay on
“ “Vertigo” by Alfred Hitchcock ”
Get custom paper
NEW! smart matching with writer

Thrillers are typically movies that attempt to create excitement and include stories about murder, conspiracies, violence, or, in the case of Vertigo, a psychological thriller with unusual characters with unstable mental states. Vertigo checks most of the boxes in defining itself as a thriller. However, simply labeling Hitchcock’s Vertigo a thriller will limit its contents, symbols, motifs and themes to just that of a thriller film.

Very frequently, a “film can revise or reject the conventions associated with its genre” (Bordwell, 2001) Instead, in analyzing the film, we need to explore its mystery and romantic melodramatic themes Hitchcock used in creating this masterpiece which defies itself being categorized into a single genre. As the man who helped to shape the modern day thriller genre, Hitchcock was fluent in manipulating the audience’s fears, and suturing them into a state of association with the characters and the world in which they exist.

The main point of Vertigo being a thriller is the plot – Scottie, the protagonist and victim of a planned murder of an old friend’s wife – whom he falls in love with, an impossible love as she ‘dies’ and in turn, he continues his downward spiral into mad obsession.

These semantic elements are true to psycho-traumatic thrillers, which are centered around the psychotic effects of a trauma on the protagonist’s (detective) current involvement in a love affair and a crime.

The protagonist is always the victim – generally of some past trauma which is Scottie’s acrophobia leading to his fellow police officer’s death, and often of villains who take advantage of his or her masochist guilt (Cook, 1999). These elements are evident of Vertigo being a thriller, but there is more. How Hitchcock defies Vertigo as being just a thriller is how the semantic elements fall short. Unlike typical thriller conventions, Vertigo has no happy ending. The flawed protagonist falls in love, which in turn became an obsession that ends in madness.

He is guilty of all three deaths, and he stays in a state of transition the entire film. Hitchcock, who pioneered the use of morally ambiguous characters in cinema, filled Vertigo with such characters, especially the protagonist. The repeated motif of the spiral represents Scottie’s constant state of suspension and transition, all the way to the end of the film. Another major element that needs to be explored, is in fact the main motivation in the film – romance, or love, that eventually boils into obsession.

Hitchcock uses the several cinematic techniques, music, and the motif of green to portray this element. The first time Scottie and the audience sees Madeleine, she is wearing green, she drives a green car, and when they visit the Sequoias, the name translates as “Always green, everlasting”. Scottie’s love for her was ‘everlasting’, even after death (Duncan, 2004). The notion of everlasting carries over to when Judy Barton appears, Scottie attempts, with succession to transform her. He changes her dressing, makeup, hair, and speech into his image of Madeleine.

Perhaps the most impactful scene visually in the entire film was when Judy/ Madeleine emerges from the bathroom after Scottie convinced her to do up her hair, the final touch/ transformation into Madeleine. The sequence began with Scottie pacing in the apartment near the window as Judy was doing up her hair in the bathroom. He finally settles down onto the couch, facing away from the toilet door, waiting. As the bathroom door opens, he turns to his left, and we only see his left profile (Fig 1. ), a mirror image to the first time he set eyes on Madeleine in the restaurant – unsure, and this time, full of anticipation.

We are reminded of the green motif, by the neon light outside Judy’s apartment. As Scottie turns around to fully see the resurrected Madeleine, he slowly stands up and at this point the music starts to pick up, leading us to the point at which he sees his beloved. The camera tracks into a close up of Scottie’s face, with the green light reflecting off his eye, he almost looks like he has tears in his eyes (Fig 2. ). Cut to Judy/ Madeleine stepping out of the toilet, it is Scottie’s POV of Madeleine bathed in ghostly green light. Similar to the scene in the cemetery where Madeleine was shot through a fog filter, which gave her the green glow, Judy/

Madeleine now had green light superimposed around her body, which gave her the appearance of a blurred, ghostly figure (Fig 3. ). This reflected Madeleine coming back from the dead, now a ghost, as green is usually used to represent ghost or spirits in film. She then slips out of the blur and into focus, Hitchcock used this to indicate Scottie’s come back to reality, coming to his senses as he spots the locket in the next scene, realizing that Judy has been tricking him all along (Truffaut, 1985). There is a series of shot/ reverse-shots, as she walks toward Scottie, all the while with the green glow behind both.

The walk toward Scottie was slow, as she pauses with a mid-shot, and eventually into a close up (Fig 4). In the close-up, she sneaks a smile, a slight smile indicating that she was happy that she was able to fulfill his request, of her transformation. Cut back to Scottie who takes a step toward her, he kisses her in close up (Fig 5). The dynamics of the music picks up as the camera starts to track around them, starting the 360-degree rotation sequence. The background starts to change, an illusion by Hitchcock to momentarily transform the mise-en-scene of the present in Judy’s hotel room to a scene from the past.

Scottie looks up from the embrace to see himself at the place where he first passionately kissed Madeleine. At this point, the camera slows the track and pulls back into a medium shot (Fig 6) and the music accelerates into a joyous tune. This shot was a visual externalization of Scottie’s thoughts and desire, while Judy was lost in her own world of denial, snuggled up, kissing his neck – an overlap and irony of fantasy and reality. Scottie kisses Judy/ Madeleine again as the camera starts tracking once again as the music slows into the main melodic climax.

The sequence is concluded a tight close up, once again with the green glow illuminating the background (Fig 7). Vertigo fulfills many elements that qualifies it as a psycho-traumatic thriller, but we cannot ignore the other (and maybe) more important aspects of the film, as discussed which were the romance, madness and obsession, which makes Vertigo the film that it is. Hitchcock also defies thriller conventions with the use of morally ambiguous characters, the tragic conclusion to the film, and other semantic elements, which deviates from the genre conventions. Vertigo defies genre, instead, it is a mix of genre.

We have to look past genre conventions to fully explore and appreciate this “strangest, yet most hauntingly beautiful film he (Hitchcock) has ever made”. Adair, G. (2002). Alfred Hitchcock: Filming Our Fears. Oxford Univerity Press Bordwell, D. & Thompson, K. (2001). 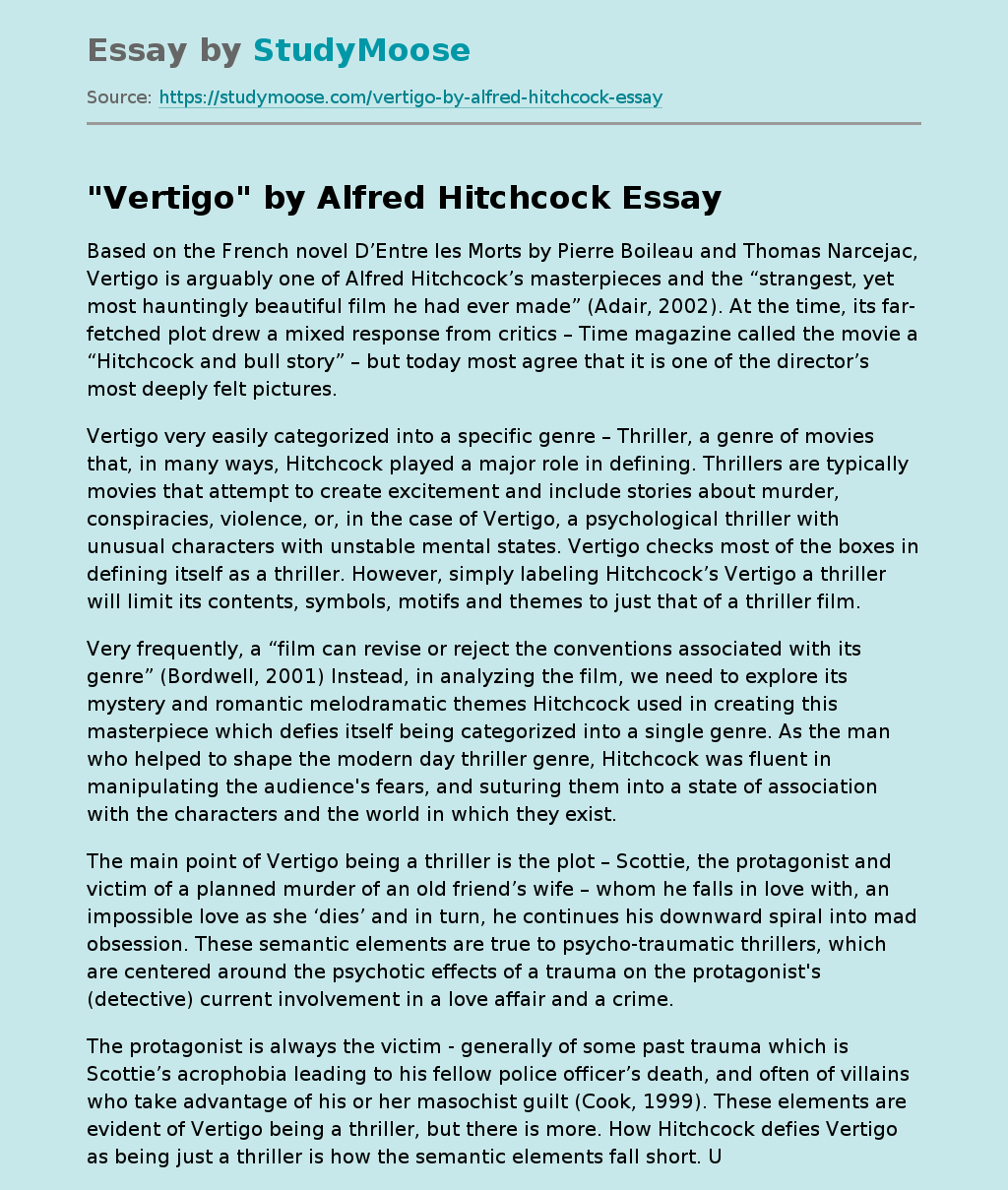