In the cinematic classic thriller, Psycho, Alfred Hitchcock’s artistic use of lighting and design are integral to conveying the theme that is omnipresent throughout the entire film: duality in human nature. Hitchcock strategically plays with these key aspects of Mise en Scene to give emphasis to the developing contrasts within his characters early in the film. Duality in human nature, or the premise that a person has good and evil within, affects everyone – whether it is hiding secrets or lies, escaping past mistakes, or masking an undesirable personality flaw.

Don't use plagiarized sources. Get your custom essay on
“ Mise-en-Scene in cinematic Thriller “Psycho” ”
Get custom paper
NEW! smart matching with writer

Duality is evident in most of Hitchcock’s characters, but especially in the protagonist Norman Bates, as well as the woman who is ultimately responsible for the onset of his public demise, Marion Crane. Crane, initially depicted as a trustworthy person, is blinded by her passion for a man who claims they cannot be together for financial reasons. Rather than deposit $40,000 for her employer, she instead steals the money so she can be with her lover.

On her way to him, she ends up at the Bates Motel where she meets Norman Bates, a psychopathic killer. These characters are the perfect example of dual characters, each putting on a façade for the other; the audience, however, is only aware of Crane’s flaws. While design and lighting reinforces the duality of human nature throughout the film, it is the scene where Bates invites Marion into the back parlor of the motel office where these elements of Mise en Scene are unmistakable.

Despite the fact that Psycho is shot entirely in black and white and color was not developed until the mid-1960’s, five years after the release of the film (“A History of Colour”), Hitchcock is still able to brilliantly capture the duality of human nature with the use of different lighting in the parlor scene. Inside the parlor, Marion sits delicately on a chair; the only source of light comes from a table lamp next to her. The lamp radiates with warmth and lights up Marion’s face, making it seem as if she is almost glowing. Hitchcock also uses additional fill and high key lighting to construct a certain softness around Marion, so that her face is well-lit yet without any shadows. Although she just stole $40,000 (via a quite disturbing sequence of actions), Marion now appears almost angelic as the soft lighting envelops her lovely face. Given her recent criminal actions, the audience might expect Marion to be surrounded by dim lighting, but Hitchcock deliberately does not do this to emphasize her duality: Marion is not “hiding” in the shadows; in other words, she is not absorbed by the darker side of her mistake. By using plenty of light on Marion, Hitchcock is illustrating that restitution and penance is achievable. At the end of the scene the audience learns that she is going back to her employer to return the money and try and fix what she has broken.

In the same scene, Norman Bates, who initially appears to be a mild mannered man, is placed far away from the lamp and surrounded by low key lighting. Fill light and back light is less apparent, which creates a strong shadow behind Bates. The result of the lower lighting and contrasting shadows allows the audience to infer that something is off about Bates, and that he might even be hiding something (at this point of the movie we have no idea Bates is a killer) even though he seems to be very welcoming and warm towards Marion. The duality within Bates is clearly beginning to develop in this scene.

The lighting in the Psycho parlor scene is augmented by Hitchcock’s use of several other tangibles to emphasize the duality in the two characters: décor, props and set construction, and the wardrobes of Crane and Bates. In the parlor, the small room is filled with two chairs, a lamp, and a coffee table with a tray of food that Bates brought her. On the tray sits a white ceramic pitcher of milk with delicate lines that illustrates Crane’s indispensable goodness. Above her is a round picture frame and next to her is a, soft, rounded lamp shade. The walls behind her are smooth and lightly colored as she sits there politely eating a small piece of bread. She wears a light colored dress and looks very well put together. All these decor and wardrobe details suggest she is a very feminine and compassionate character; the softness of these elements give us a sense of harmony and peace. Crane, of course, has her secrets; she did just steal $40,000. Bates, on the other hand, is surrounded by harsh decor items: sharp, square photo frames and a broad, dark chest with defining lines. And, most importantly, Bates is surrounded by multiple stuffed birds that are hung on the walls and placed on the chest and table. All these dark and somewhat disturbing decor items suggest that Bates has a frightening side to him – even though the audience does not know the eventual crimes Bates is about to commit. 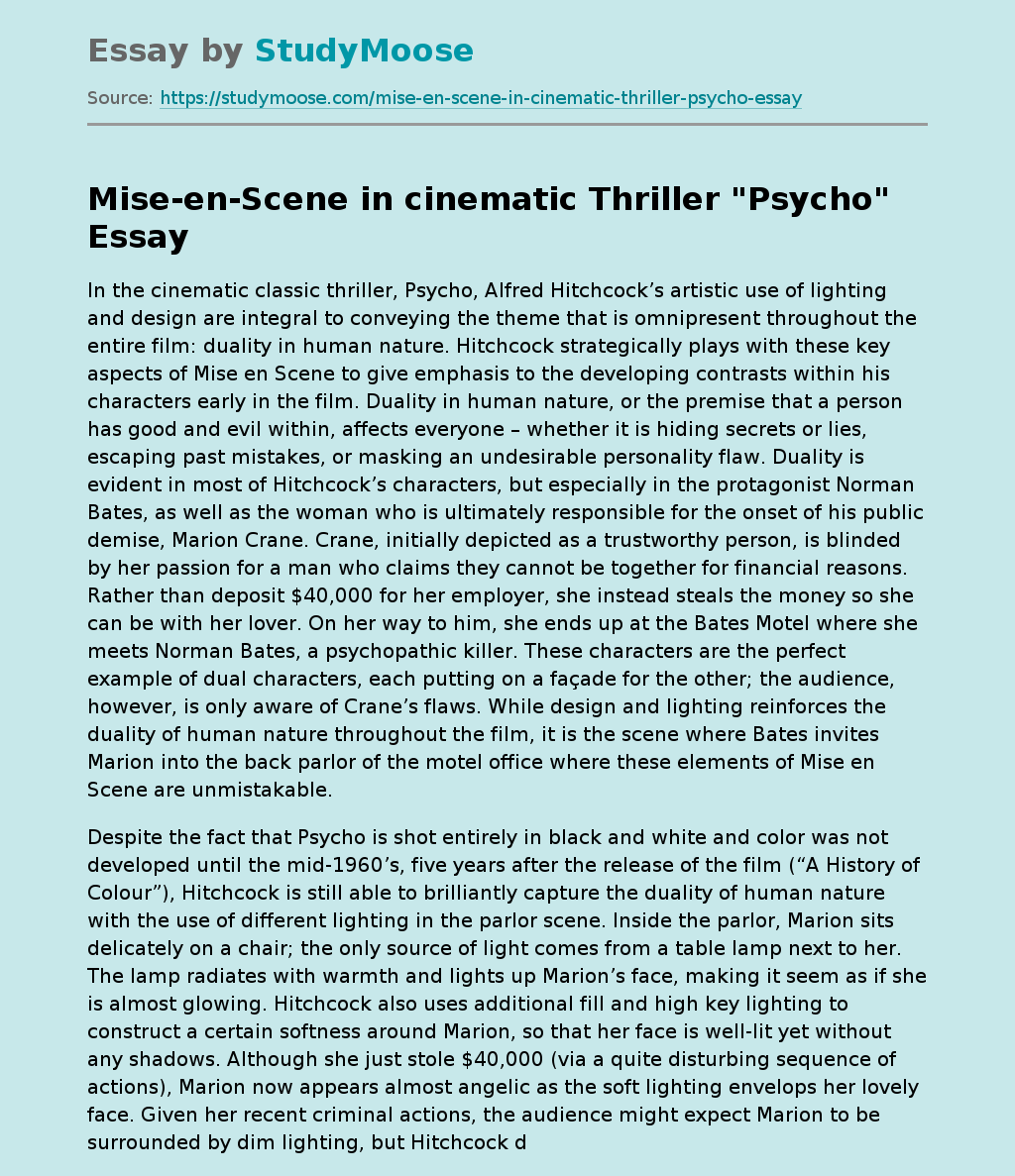