The Mise-en-scene of The Breakfast Club

In John Hughes, The Breakfast Club, the film is based upon an interesting group of five teenagers in high school that is attending detention on a Saturday morning in the city of Shermer, Illinois on March 24, 1984. Within the eight hours, they are going to spend with each other at the school library, they slowly begin to discover things about themselves and also things about each other that would never seem to take place on a Saturday morning in detention. All throughout the film, Hughes is displaying cinematography and mise-en-scene to elaborate to the viewers on the trials and tribulations of growing up, having to overcome with family problems, attempting to try and make friends, and the “main thing” in high school, trying to adapt and fit in with the other kids.

Don't use plagiarized sources. Get your custom essay on
“ The Mise-en-scene of The Breakfast Club ”
Get custom paper
NEW! smart matching with writer

To be more specific, John Hughes tends to display jump cuts, medium shots, close-ups, etc to show how the characters are being placed, colors, lighting, clothing to elaborate to the viewer on how they are dealing with being a high school student.

Claire Standish, who has taken upon the persona of a “princess”, with her attitude and fancy clothes, and exotic food for lunch, Andrew Clark, the athlete amongst the group, with his letterman jacket and toughness-like behavior. John Bender, the “criminal” of the bunch, with his crude disposition, profanity, spitting, and destroying public property while smoking cigarettes. Brian Johnson, the smart one, with his dork-like persona, infatuation with school clubs and events and attempting to be the “perfect child” to his parents.

Alison Reynolds, who is quite similar to Bender, with her strange persona, drawing several pictures and uses her dandruff as snow for it, replacing the bologna on her sandwiches with sugar and cereal. With all of these conflicting personalities, Hughes managed to express how they overcome their separate debacles when it comes to their home life, school life, and how they are going to survive to be amongst each other for the next eight hours.

A scene that I noticed to describe for this discussion s between Andrew, Claire, and John, where the first two are having a conversation and Bender eavesdrops and interrupts them to ask Claire about her problems concerning her home life. While she is talking, you can tell he is listening intently. During the scene, Hughes is displaying several instances of mise-en-scene with how the camera cuts to certain people while they are talking. He uses several jump shots throughout the scene. The mise-en-scene of this film is executed by the scenarios in which Hughes is utilizing certain aspects of character placement, instances of lighting, use of colors, and display of clothing to illustrate to the viewer the difficult personalities and issues of the five main characters. He does shed a brighter light on Claire, as shown in several scenes.

One where the placement began with Bender sitting atop a counter, casually flipping through the card catalog. As the camera begins to jump from Andrew on its way to Claire and then back to Bender and so on and so forth, we notice the teenagers are strategically placed on the far left or far right of the screen, as if it symbolizes that there is never the “center of attention” amongst their families. The refusal and lack being central shows that the sense of a shortage of the balance in their lives, which says the home problems are essentially based upon their parents not giving them enough attention. The use of lighting throughout the scene is very interesting and quite natural to the level that it seems unnoticeable to the viewer. When Claire and John were talking, both are shown in little, if barely any, a light being cast upon their faces, which could easily indicate the seeming darkness in the teenagers with the pain they have to endure at home and the several instances of suffering.

Colors and clothing are extremely crucial to the development of characters and their personalities. Bender is wearing a slightly faded denim jacket with a plain red shirt and a white shirt. The blue can represent masculinity that is beginning to slowly fade because there is always an authoritative figure, typically the father or maybe the principal at the school, to overpower his masculinity. The red displays blood or violence, as we find out he comes from a sort of violent household, with his father constantly beating him. The white shirt underneath his other closed symbolizes the innocence he has and how kind-hearted he is, which shows out to be true because of his character personality. An innocent teenager that has good intentions and just wants to be accepted by the society and amongst his peers, but his goals are often masked by his: criminal” acts and behavior.

The Mise-en-scene of The Breakfast Club. (2021, Sep 09). Retrieved from https://studymoose.com/the-mise-en-scene-of-the-breakfast-club-essay 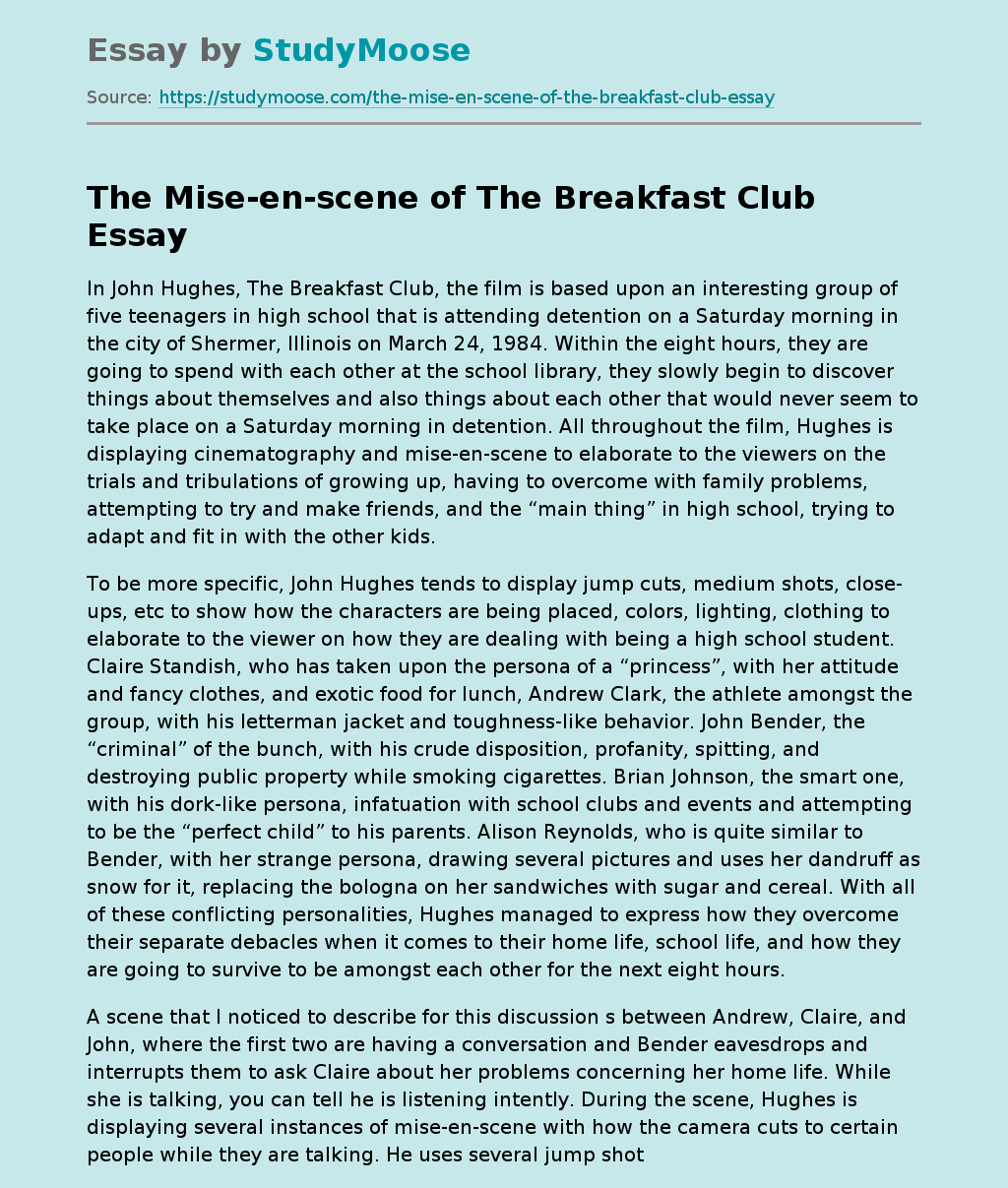