A professor named Peter Drucker stated, ‘’the most important thing in communication is hearing what isn’t said.’’ The quote basically means the ability to read the emotions and nonverbal communication of another person increases the understanding and elevates relationships. A prominent writer and producer named John Hughes directed a movie called The Breakfast Club where five students with nothing in common are faced with spending a Saturday detention together. At the beginning of the movie they have absolutely nothing to say to each other but by 4 P.

Don't use plagiarized sources. Get your custom essay on
“ Characterization: The Breakfast Club ”
Get custom paper
NEW! smart matching with writer

M., they had bared their souls to each other and become good friends. The five main characters are introduced as Allison the Basket Case, Brian the Nerd, Claire the Princess, Andy the Athlete, and Bender the Criminal. John Hughes uses characterization in The Breakfast Club by showing people from totally different backgrounds can communicate and even agree on issues.

A scholar named Ally Harper wrote a book called The Explanation of The Breakfast Club that stated adolescence is the time of transition between childhood and adulthood where development which leads to psychological, social and economic changes, and toward ever-increasing independence (4).

Adolescence involves the development of a sense of identity; it is a time of questioning of relationships to parents and to peers, and of roles in society (Harper 5). From adolescence to adulthood, people will always stereotype you from how you present yourself too even where you grew up. Throughout your years of schooling, relationships will be formed, and as teenagers begin to move away from their parents, peer groups play a vital role.

Adolescence place a lot of importance on belonging, on being included, and on being part of a group; group affiliation not only supplies emotional security, but also is a source of status and reputation with motivational properties (Harper 6).

The cliques formed during adolescent years can define people in their social world and follow them to adulthood. The five students in The Breakfast Club were stereotyped by their fellow students and their warden for the day: Claire the Princess who was also known as Miss Popularity, Brian is the geek, Andrew is the athlete (Sporto), Bender is the criminal, and Allison the Basket Case. The strict confines of high school separate the characters. Under normal circumstances, none of these teenagers would even speak to one another, but Saturday detention sets aside these divided groups of people and bring them together under a common ground. Their punishments that created the members of The Breakfast Club allowed them to move past these social norms and eventually they find this common ground by interacting with each other, and learning the details of each other’s lives by looking beneath all the stereotypes. The Breakfast Club was accurate in its portrayal of each characters internal psychological perspective.

While in detention, they are expected to write about who they are in one thousand words. John Smith wrote a book called The Breakfast Club: Throughout the day, their actions reveal their innermost struggle involving their cliques and their home lives. As the movie progresses, we find out the reason each teen is in detention that culminates in a climactic discussion about who they really are, which ironically answers the essay none of them were going to write (except Brian). In the end, Brian is manipulated into writing a group essay for everyone in which he gives each person their defining nickname. While each student represents a different clique, together they form The Breakfast Club (15). Brian the nerd, has packed a nutritional lunch, which Bender associates this with him being a perfect nerdy child who has a loving mother who still packs his lunch for him. Furthermore, it is assumed that Brian is the nerd because he ends up writing everyone’s essays and is a member of academic clubs.

Brian was also subjected to peer pressure which is defined as social pressure by members of one’s peer group to take part in a certain action, adopt certain values, or otherwise conform in order to be accepted (Smith 16). An example of peer pressure is when Brian chose to smoke weed with the rest of the group. Claire’s personality can be explained by reciprocal determinism which is defined as interacting influences of behavior, internal cognition, and environment (Smith 17). Claire’s parents are divorced and she is often used as a weapon by her Mother and Father to get back at the one another. The way Claire is treated at home affects her self-worth which leads her to feel the need to seek approval from others. In the movie, Brian describes her behavior as conceited because she is a “popular” and looks down on those “under” her on the social hierarchy (Smith 16). This shows that her behavior, internal thoughts, and her environment are all contributing factors to her personality. In the movie, Bender falls victim to the fundamental attribution error.

The fundamental attribution error is the theory that we explain someone’s behavior by crediting either the situation or the person’s disposition (Smith 18). At home, Bender is treated badly, which contributes to his personality as being depicted as aggressive, and disrespectful. In Bender’s case, everyone attributed his actions to his personal disposition and did not take into account his home situation (Smith 19). Allison the Basket Case is in detention for no reason at all, she explains later in the movie, she was bored and had nothing else better to do. Allison’s psychological perspective can be explained by Maslow’s hierarchy: Physiological needs come first, followed by safety needs, and then the need to belong and feel loved. Allison had met the first two needs on the hierarchy and the next step was to fulfill the need to belong and feel loved. At home, Allison was ignored by her parents and at school she had no friends. These factors explain why she is so socially inept and served a Saturday detention that she did not even have. Allison admits to the group that she sees a shrink because she is compulsive liar. During her sessions, her shrink uses free association.

Free association is a method of exploring the unconscious in which the person relaxes and says whatever comes to mind, no matter how trivial or embarrassing (Smith 20). Andrew the athlete, shows a frustration-aggression issue when he gets into an altercation with Bender. The frustration-aggression principle is the principle that frustration creates anger which can generate aggression (Smith 21). Andrew was aggressive towards Bender when Bender disrespected Claire after she repeatedly told Bender to knock it off, but Bender continued to meddle with her which led to Andrews aggressive side to show. Throughout the movie, we learn about all the different values and morals each family holds. Brian’s parents enforce him to be a straight-A academic student, while Benders family doesn’t even seem to care if he actually attends school. Claire’s parents support her role of being the most popular girl in school, and in contrast, Allison’s parents portray the image of not caring if their own child has any friends. The parents of Andrew the Athlete portrays the image of wanting their son to the best Athlete while not caring what anger issues this may create later in his lifetime.

John Hughes doesn’t use stereotyping and physiological concepts to build the characters. The punishments that led them to the actual detention defined the characters, but like most critics, they viewed John as using stereotypes and self-concepts as the actual defined characterization. The crime committed was the actual characterization created that attempted to introduce what the teenagers were actually like. A credited author named Fabian Kraft wrote The Themes Associated with The Breakfast Club that stated if we take the moment to look passed labels and cliques a person is associated with, then we may find that we are surprised to see that person is unique-not just who they portray themselves as. In The Breakfast Club, John Hughes did not intend to differentiate the families to portray how they influenced their own teenager’s values and morals in life. The child’s own personal problems led to the way they act in public.

David Popenoe, a Professor of Sociology wrote an article called We Are What We See: The Breakfast Club that stated more and more children are growing up with personal problems, little empathy, and a weakened respect for law and order and civility. Furthermore, you can grow up in what it seems a well-rounded family that overall wants your happiness and sets high values, but some teenagers like Brian for example will still act out. John Hughes introduced The Breakfast Club by showing people from totally different backgrounds can communicate and even agree on issues by defining the teenager’s connection of characterization through stereo-typing, psychological perspective, and the family’s different morals & values. No matter what, your own characterization will shape your life, but you have the choice of choosing of your own path. 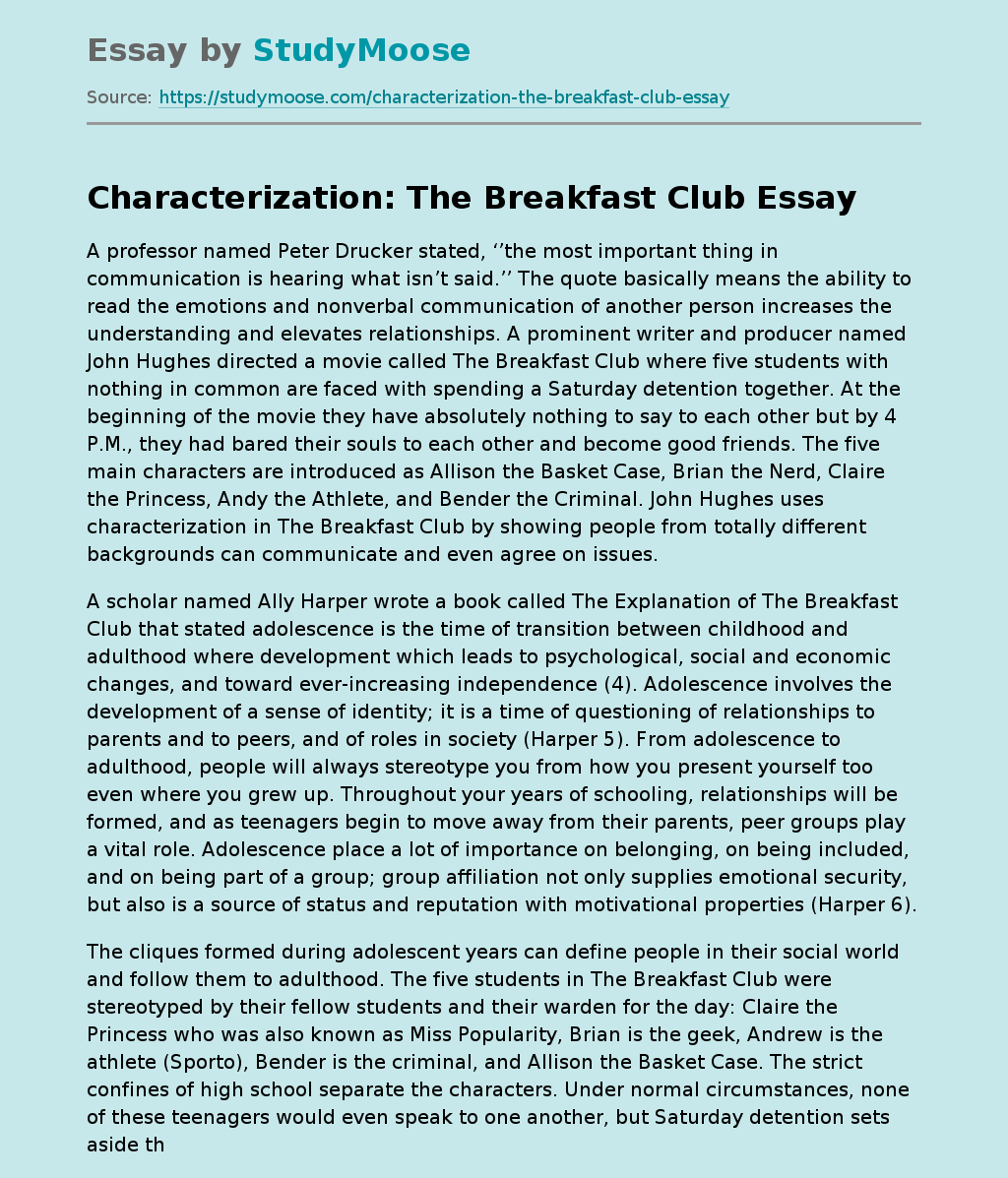