Theory of Deviance Illustrated by `The Breakfast Club`

The sociology of deviance refers to the concept of deviant behavior or actions that tend to defy existing social norms or actions that are against generally accepted patterns of behavior. (Kendall 2006) Sociologists believe that deviance is a relative concept because what a certain society believes to be acceptable may be perceived differently by another society. As such, deviance may largely be a function of the society that defines what is within the limits of acceptable and what is considered deviant.

Among the most popular theories about deviant behavior is the one forwarded by Howard Becket.

Don't use plagiarized sources. Get your custom essay on
“ Theory of Deviance Illustrated by `The Breakfast Club` ”
Get custom paper
NEW! smart matching with writer

The Labeling Theory was first discussed in 1963 and maintains that deviance is actually a product of society’s tendency to label or pigeonhole certain people. This labeling casts or stereotypes people within certain roles, and is called deviant if they fail to act within their label. People act in a manner that is expected of them and in a sense, what we expect from people become self-fulfilling prophecies.

Society imposes its own perception on a person’s character, and in a sense, the individual is shaped by society to fit that mold. As far as deviance is concerned, Kendall says that people who are labeled as deviants act according to the stereotypes of that label. (Kendall 2006) The people who arbitrarily decide on what is deviant and conventional are the very same people who will label a behavior as unacceptable or not.

Labels exist in so many levels and in all aspects of our lives. The varied roles that we essay in society are actually our own ways of fitting the mold or staying true to our labels.

The tragedy of labeling is that it almost always has a negative connotation. This cruel name-calling creates a tension within the individual, whether to pursue and define their own individual character or repress themselves in order to avoid the nasty labels.

Among the best examples of the label theory at work can be seen in the movie The Breakfast Club. The Breakfast Club was released in 1985 and was written and directed by John Hughes. The movie is widely held by experts as a classic in the teen film genre and has been influential in youth films that came on its heels. The story revolves around five teenagers, each representative of the different classes or groups in high school. Each student is thus symbolic of a certain social perception and carries with them the labels and stereotypes that each one has about the other.

These five people were forced to come together when all of them were placed in detention one Saturday. While at first there was some hostility, they each came out of the detention room with better understanding and respect for one another. At first, each character acted according to their label, and they treated the other person according to the stereotypes that they have for one another. The beauty was treated in disdain by the brain, who believed the beauty to be shallow and vain.

Conversely, the beauty treated the brain with some amount of condescension because she thought the brain had no sense of fashion and self-respect. The jock harassed the nerd, believing that brawns were always better than brains. They all were afraid of the criminal and stayed away from him, believing that he is nothing more than a troublemaker who will harm them.

The basket case treats everyone with scorn, in her usual self-defensive stance. However, while on the surface they were all acting hostile towards one another, they were actually just acting out in fear that the other person might not like and accept them. In a sense, every character’s behavior towards one another was just a reflection of how their labels tell them to behave. The labeled characters become trapped in the negative expectations and stereotype that the label carries. How they are perceived becomes how they perceive themselves, and it then becomes a tragically self-fulfilling prophecy.

As time went by however, they grew tired of harassing and insulting one another and began opening up to each other. As they reveal their innermost secrets and thoughts, all of the five characters realize that they all share the same fears and hopes, and that most of their differences were only a result of the labels and stereotypes that they have for each other.

The one labeled beauty is stereotyped as shallow and stupid, the jock is seen strong but dumb, the nerd is perceived as haughty and boring, the troublemaker is believed to be depraved and cruel, the basket case is avoided because she is stereotyped as weird. Indeed, all of them have labels for each other, and each of them acts according to the stereotypes that the label carries. Towards the end of their detention, all of the characters were saddened by the fact that the friendships formed inside the room would soon vanish as they step out of detention and resume their normal lives and go back to their own respective groups or cliques.

However, the film makes a statement that labels, sticky and enduring as they are, can be overcome and that people can break free from the label that society has imposed upon them. In the film, the five characters have been able to forge genuine friendships in the short span of time that they have been together. The beauty and the criminal both reached out for each other, ignored their social roles and kissed.

The jock and the basket case also became a couple, and the movie ended with each of them leaving a token of one’s class to be left to the other. The jock gives the basket case a patch from his varsity jacket; the beauty gives the criminal her earrings. This symbolic act of giving tokens is representative of the character’s surrendering their identities and stereotypes and just being themselves in the presence of the one who will accept them for who they are.

In the end it might be said that The Breakfast Club is a microcosm of our society at large, where roles and labels determine how we behave and how we treat one another. But when we make the effort to look beyond labels and see the person inside, we will realize that the differences we believe to exist are mere walls we put up for ourselves, fearing that we will not be accepted for who we are. The Breakfast Club is a testament that people can overcome and go beyond labels if they are willing to look at and accept the person within, regardless of how society perceives them to be.

Kendall, D. (2006). Sociology in Our Times: The Essentials. Thomson Wadsworth.

Theory of Deviance Illustrated by `The Breakfast Club`. (2017, Mar 17). Retrieved from https://studymoose.com/theory-of-deviance-illustrated-by-the-breakfast-club-essay 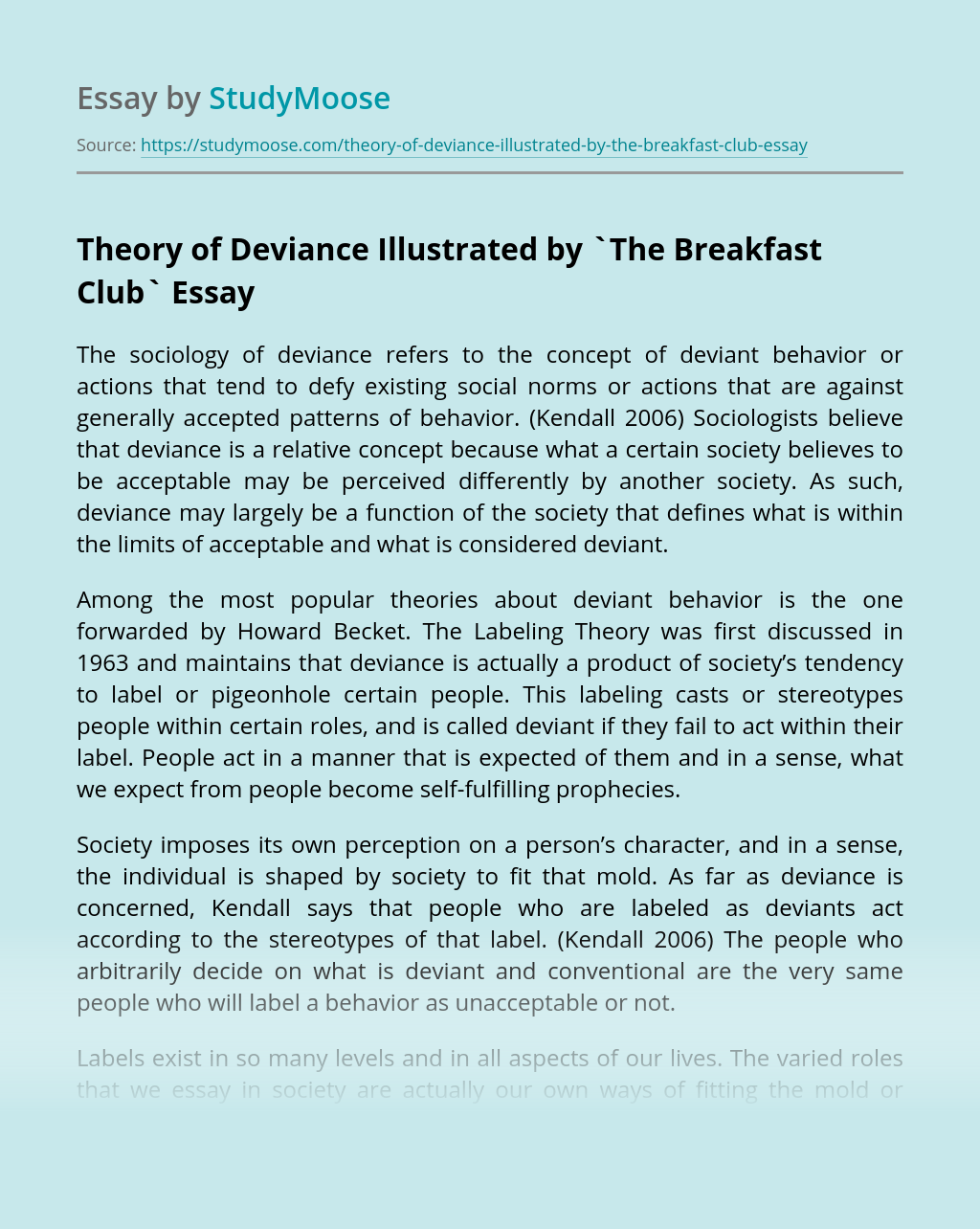