Group dynamics in The Breakfast Club

Whether groups are formed for social or task oriented purposes, the ability to produce and maintain a sense of affiliation, peer support and collaboration is important for overall group functioning. The cohesion of a social group is produced through the establishment of a set of group norms, which are later defined as a guide for conduct accepted within a group of individuals. However, in order for a group to perform and produce results, the team leader should guide his/her team through the proper stages of group development, which includes the following steps: forming, storming, norming, performing and adjourning.

Don't use plagiarized sources. Get your custom essay on
“ Group dynamics in The Breakfast Club ”
Get custom paper
NEW! smart matching with writer

Although teams should follow all these stages of group development, the forming and the norming stages are the most important, since these develop and foster the development of the group norm which prevents segregation within a group. In addition, an autocratic leadership style, which is a very authoritative method is useful in cohering a poorly organized group, especially a group of young high school students as in the movie, The Breakfast Club.

The first stage of group development is the forming stage. Forming is when members get to know each other and find common ground, while the group leader provides structure, direction and ground rules. For example, in the movie, The Breakfast Club, the forming stage was the point at which students were forced into a group during detention, which provided structure and rules and allowed individuals to become familiar with one another. The second stage in group development is the storming phase, which usually involves arguments, power struggles, debates and general conflict of interest, often resulting in individuals perceiving such gathering as a waste of time.

An example of this stage also seen in the The Breakfast Club is where differing opinions and ideas due to variations in social norms created conflict and arguments within the group.

However, if a team leader is able to get past this stage by reminding members of the general goal, group members will begin to work as a team and will move onto the norming stage. At this stage, the group begins to realize the more positive points of individuals within the group, which promotes the development of trust and respect which begins to build group cohesion. The next stage is the performing stage, which is typical of high-performing teams that are able to function as a group and figure out various options to get the job done smoothly and effectively without supervision. The final stage is the adjourning phase, which is the final step in completing tasks and breaking up the team. The groups that are formed as adolescents often determine group associations as adults and define an individual within their social group that will either set them with or against other groups. This is described in an article on social groupings by Colin Allen, which mentions that our social associations as adolescents are strong indicators to future patterns of social norms as adults.

Therefore, the group of students in the movie, The Breakfast Club, can also be extrapolated to adult group dynamics. However, the varying social norms between groups can present conflicts when adults are required to function within a very diverse group of individuals. In The Breakfast Club, the Jock, Geek, Prom Queen, Delinquent, and the Freak groups are brought together initially through an autocratic or directive leadership role, used to bring the group together in order to proceed to the next phase of group development. This stage is particularly important within a group of varying personalities, such as a group of high school students, since it is most often the only way such a diverse group can become familiar with each other. Then through the forming stage, the group members move away from differing group norms, interact and eventually find common ground within the group and establish a unified group norm.

The importance of developing a group norm is also illustrated in an experimental study done on group norms and self-aggressive behaviors, which indicated that the establishment of a group norm played a crucial role in the expression of self-inflicted aggression. This tendency to conform to a group norm was shown to influence individual behavior, such as the enhancement of self-image associated with group identification. Therefore, the formation stage in a group process is important, since it develops group norms by requiring the individual to gather data and impressions on similarities and differences within the group and rely on a strong authoritative leader for guidance. The second important stage in group development is the norming stage, which emphasizes interpersonal relations and group cohesion. This is the stage at which the members are actively acknowledging each other through learning about one another and developing group cohesion.

Through this stage, individuals begin to share leadership roles and dissolve former cliques and contribute to the overall success of group functioning. This will also increase the sense of group belonging, and individual invested interest in solving any issues within the group. This stage is characterized by sharing, soliciting information, accepting and finally, providing feedback, and increased creativity. In the film, The Breakfast Club, this stage occurs later when the group has already gone through the forming stage, where the individuals are able to function as a group towards the same goals. In general, if this stage is achieved, members of the group will become more open with each other and information sharing will occur, which will benefit the effectiveness of the group. At this stage a more relaxed leadership style can also be implemented, such as the democratic or laissaize-fair methods.

In conclusion, the development of a group who vary in social norms is very dependant on the forming and norming stages, since these steps allow the group to develop a unified group norm. Depending on the characteristics of the group, normally an authoritative style should initially be implemented in order to bring some cohesion to the group. As an example, a group of first year nursing students would benefit from the forming stage, under the direction of an autocratic leadership, since this would offer a solid foundation on which to build a unified group norm. After the group is formed and rules have been learned and accepted by the students, a less authoritative leadership style can be implemented in the norming stage. This will allow students the freedom to learn and explore the field of nursing and develop their individual self-confidence within the field.

Group dynamics in The Breakfast Club. (2016, Apr 09). Retrieved from https://studymoose.com/group-dynamics-in-the-breakfast-club-essay 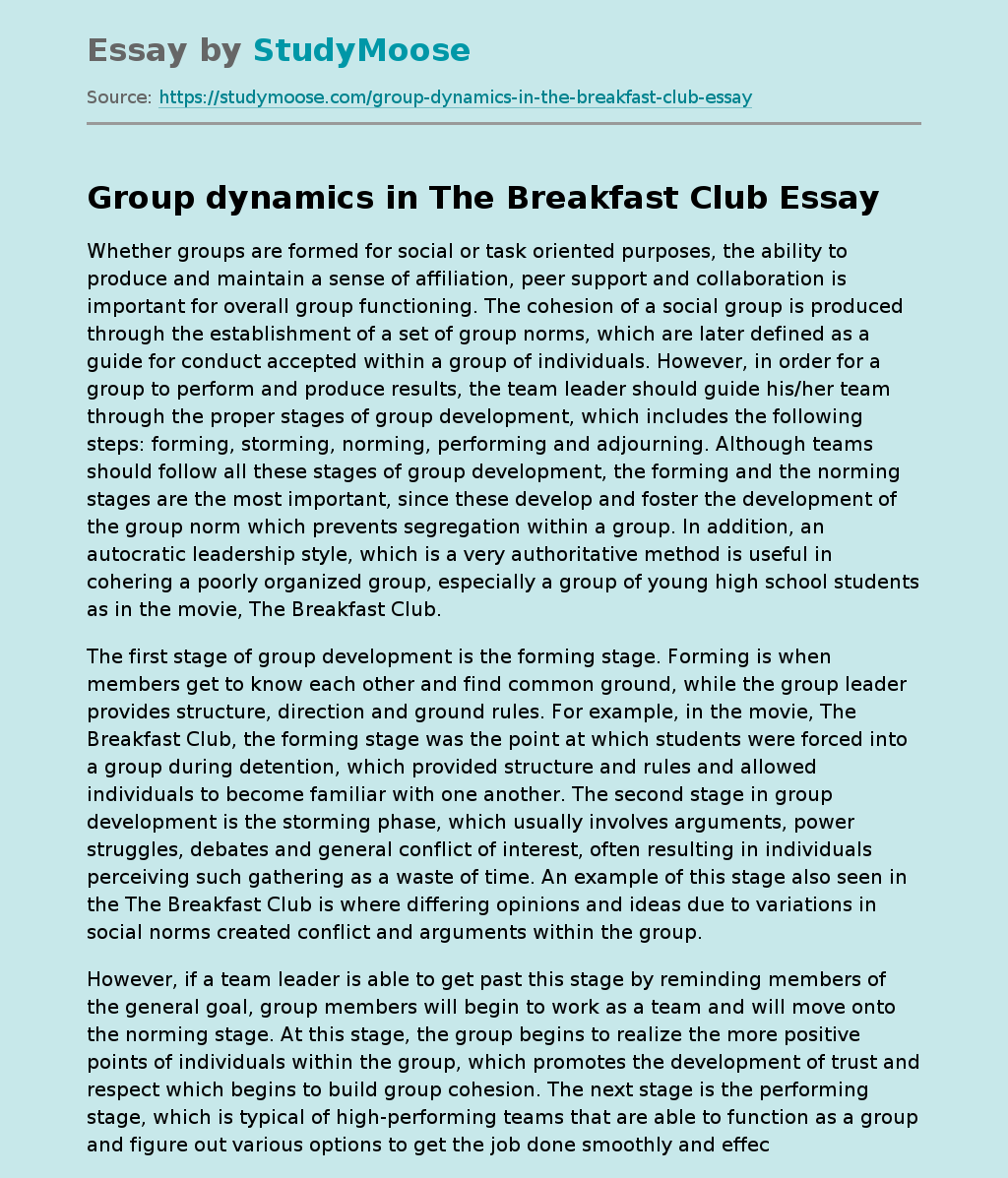