The Breakfast Club is a 1985 film based on five students from entirely different social groups forced to spend an eight hour Saturday detention together for their own individual reasons. The five students were all given the same assignment, to write an essay about “who you think you are” and the acts they committed to end up in Saturday detention. As high school students of course they put off the assignment until the last minute and instead they passed the hours dancing, fighting, smoking marijuana, and getting to know each other.

Don't use plagiarized sources. Get your custom essay on
“ The Breakfast Club Reaction Paper ”
Get custom paper
NEW! smart matching with writer

Eventually they found out that they had a lot more than they thought in common regarding their family life and that each one of them was insecure in their own way.

The five students were easily able to relate to each other and they became friends, the only tension left between the group was the inevitably painful question, “Would they all remain friends once the detention was over?” It was not until the very end of the movie that the characters really opened up and revealed the answer to that question.

The characters developed relationships with one another foreshadowing their future friendships and with the consensus of the group one assignment was handed in for the five of them. In response to the question “who do you think you are?” the group responded, “Dear Mr. Vernon,

We accept the fact that we had to sacrifice a whole Saturday in detention for whatever it was we did wrong, but we think you’re crazy to make us write an essay telling you who we think we are.

You see us as you want to see us. In the simplest terms and the most convenient definitions. But what we found out is that each one of us is a brain, and an athlete, and a basket case, a princess, and a criminal. Does that answer your question? Sincerely yours, the Breakfast Club.”

The Breakfast Club is a prime example of deviance for every character in the film is deviant in some way. Both positive and negative deviance, as well as the strain theory, internal and external social controls, and anomie are evident throughout. As the movie begins five students from different cliques are forced to spend an entire school day in a room together and at first it is torturous for them, for they view each other as being deviant. Brian is viewed as the nerd, Bender as the rebel, Andrew as the jock, Claire as the spoiled brat, and Allison as the crazy girl, but what they do not yet realize is that they are more alike than they seem. The social norms within the school and their constant need to conform in order to fit in with their individual social groups makes them outcasts to the one another.

For example, Brian, the nerd, and Claire, the primma donna, display positive deviance. Both Brian and Claire over-conform to social expectations in order to fit in with their cliques, family, and friends. Brian constantly strives to get good grades because he feels as though his brains are his key quality, where he fits in society, and if he does not excel in his academics he goes to extremes such as contemplating committing suicide. Claire also displays positive deviance but through ritualism being that she uses her beauty and wealth to do so. Claire’s obsession with being perfect to fit in with her family and friends nearly drives her mad.

On the contrary, Bender, the rebel, and Allison, the crazy chick, display a great sum of negative deviance. Both Bender and Allison behave in ways that under-conform to the accepted norms by way of rejection. Bender is accepting of how to be successful but uses innovation to do so rather than conforming. He finds ways to achieve his goals illegally rather than actually working towards success. Allison also rejects conformity but through retreatism. She has dropped out of the race for success and accepts her life as the strange, outsider without any friends.

Yet the most significant of all of the characters in my opinion is Andrew, the jock, because he displays both positive and negative deviance in attempt to conform. Andrew is more comfortable with being positively deviant, striving for extremes of perfectionism in the form of sports for acceptance from his family and peers, but he is also willing to display negative deviance at times. As a jock Andrew is expected to be athletic, popular, and intimidating, three traits in which all coincide. Andrew struggles to be intimidating and feels as though he disappoints his family and friends by not being tougher so he occasionally beats and tortures the weaker boys in the school.

The Breakfast Club is typically about five teenagers and their deviant ways but regardless of their differences they all have one major thing in common, they are struggling to fit in. Neither Andrew, Brian, Bender, Allison, nor Claire are truly their own person, they are all conforming in some way to fit in and they all have their weaknesses. They discover that they all have strained relationships with their parents and are afraid of making the same mistakes as their parents did. The Breakfast Club ultimately reveals how each of the teenagers’ perspectives have changed and most importantly how deviance was each one of their temporary safety valves. 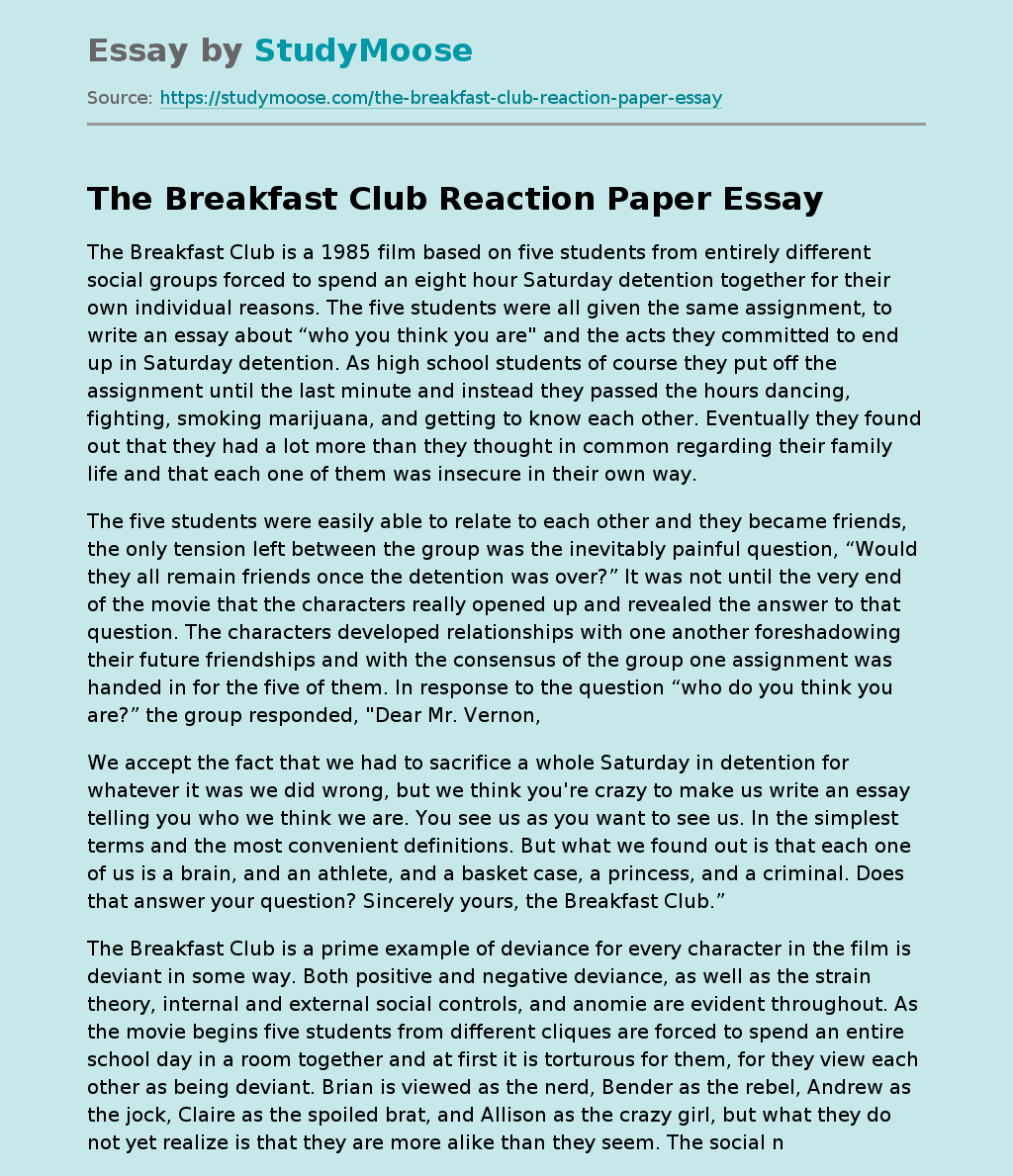