Compare and Contrast Two Sociological Theories to Crime and Deviance

Sociological perspectives on society are divided into two areas; Structural and Action Theories. Both these theories aim to describe how society is structured, and what contributes to that make up.

This document will look at the structural theories in relation to crime. It aims to show how two sociological theories can be used to analyse crime and give differing views.

The structural theory looks at society as a whole. This is called a macro theory as it takes an overall view of society.

Don't use plagiarized sources. Get your custom essay on
“ Compare and Contrast Two Sociological Theories to Crime and Deviance ”
Get custom paper
NEW! smart matching with writer

The basis of this theory is how the structure of society impacts on human behaviour. The two perspectives that will be looked at are Functionalist and Marxist they both agree that society shapes the individual and not the individual that shapes society

Crime and Deviance is part of our society. To clarify the meaning of both words in the context of this essay; crime is an unlawful criminal act, whereas deviance is a behaviour which is not a social norm (breaking the social rules).

Throughout the late nineteenth century and early twentieth century many researchers into the phenomena of crime regarded crime as a social science in which modern scientific methods could be applied to. The label of a science suggested that crime and its causes could be measured, determined and therefore a cure could be discovered.

A Functionalist study of society would look at Institutional arrangements and relationships and these would form the building blocks of society.

The way in which institutions relate to each other determines the structure and basic character of any society. People are born into an existing system of institutional arrangements.

Society is very much alive and is often compared to the workings of a human body. When all institutions work together there is a healthy society likewise when all the organs in the human body are working well then you have a healthy body. When one of the institutions fails, then society can fall apart. The conscience of society is expressed as a total sum of the beliefs and values of people who belong to that society. The collective conscience represents the will of society as a whole. Laws develop out of the collective conscience of a society – they are the norms of behaviour that are applied formally to everyone in society.

A Functionalist would argue that an amount of crime is good whereas too much crime is bad and could bring about societal collapse bringing further anarchy and confusion. It was Emile Durkheim who began the study that gave birth to Functionalist approaches to crime. When a serious crime is committed and thus becomes public knowledge through media attention, Functionalists believe that there are bonds within society that are strengthened and a sense of horror is felt. Durkheim called this a ‘collective conscience’.

Emile Durkheim found that any society is founded, maintained and reproduced through consensus. When there is a shared, common consensus around key values then the social behaviour will be regulated.

In society every individual performs a wide variety of roles such as employee, parent, and citizen. Functionalists believe that we all know how to play these roles through our effective socialisation, from parents bringing up their children properly and teaching them the norms and moral values of society to the point where they become part of the child’s own consciousness. Parsons considers that the roles played by the family and the education system are vital to social order and maintenance of the status quo.

The Functionalists believe that everybody has the same opportunities in life, if you work hard and follow the norms and values of society then your objectives in life can be met.

Durkheim believed that crime was a normal part of society and as society became more individualised crime would increase. It allows the boundaries to be made clear to everybody although he acknowledges that too much crime is bad for society and it could help to bring about its collapse.

A Functionalist would believe that the social stability is of paramount importance, problems in society can be solved through social reform rather than radical action.

Durkheim had a belief in crime and deviance not just being the makeup of a few ‘sick’ individuals but is part of society and performs an important function. But there are criticisms in his theories and he doesn’t completely explain why some people offend whereas others do not and there is no argument on laws and their validity on how they benefit society as a whole. Marxists would strongly criticise the way Durkheim seems to be ignorant of the ‘concepts of power’ and how a small number of people in power have an influence in setting laws and boundaries whereas the majority have no sat at all and to abide by these laws.

The Functionalist view of crime seems to ignore the fact that conflict and power does exist in society.

Karl Marx was born in 1818 and was a German Jew. He believed that history is not a record of wars, monarchs or great statesman, but that it’s a record of how individuals organise themselves to satisfy their material needs for food, shelter and clothing.

Marxism is a theory of conflict and they claim that there is mass equality and class conflict in our society rather than consensus. There is no common consensus of shared values or interests in our society. There is a class system and the conflict occurs between these classes.

According to Marxists society is constructed upon an economic base which is capitalism and this determines social relations.

The conflict is between the Bourgeoisie (ruling class) and the Proletariat (working class). Conflict arises as each class pursues its own interests.

Power in society comes from owning the means of production and is in the hands of the minority capitalist ruling class. The Bourgeoisie are able to control the institutions in society such as education and law. The Proletariats are merely a labour commodity that can be sold or discarded at the discretion of the Bourgeoisie even though it is actually the Proletariats that create their wealth and power initially.

The Bourgeoisie ensure that Proletariats remain committed to providing their labour by convincing the Proletariat that the economic system is based upon freedom, fairness and equality.

Marx believed that the Proletariats should unite and bring about a new society where capitalism does not prevail.

A Marxist would reject the idea that there is a consensus over a common core of norms and values and argue that those involved in crime often have antagonistic values.

A Marxist would say that the stigma surrounding who actually commits the most criminal offences would lie at the feet of the less fortunate and well-off in society and the stereotypical offender would be young, black and male. This would be backed up in their view as being highly probably and due to relative deprivation and oppression by those who have on those who have not.

According to Marxists it’s the ruling classes that make the law, controls the police and courts. These laws are in place only to apply to those less fortunate in society and are in place to protect the hierarchy against blame. Other types of crime include fraud and tax evasion by larger establishments and are often gone unreported and not treated as seriously.

In conclusion, looking at both perspectives it is easy to see the problems they both have in explaining crime and where they seem to make perfect sense. Both concepts were interesting and provided thought and the pioneers of both set precedence and have long since been adapted by others. However both the perspectives ignore the individual motivation for crime.

The question of the mental state of an individual hasn’t even been raised by any of the sociologists to explain why a person may offend.

Marxism has it criticisms and concepts that aren’t always backed up with fact. There isn’t any clear argument regarding individual motivation to commit crime only that it gets completely caught up with the concept that capitalism is the root cause. The view on high crime and the criminal being the black working class youth and biased policing and that they are simply forced into crime due to unfair laws only suiting the purpose of the wealthy and more privileged. It doesn’t explain how someone of a middle class background could fall into and take on a crime spree.

There is a belief in the manipulation of values, that laws are created to control and enforcement to further re-iterate the control but dismisses entirely that an individual may simply by their own choosing become a criminal. XVZ V 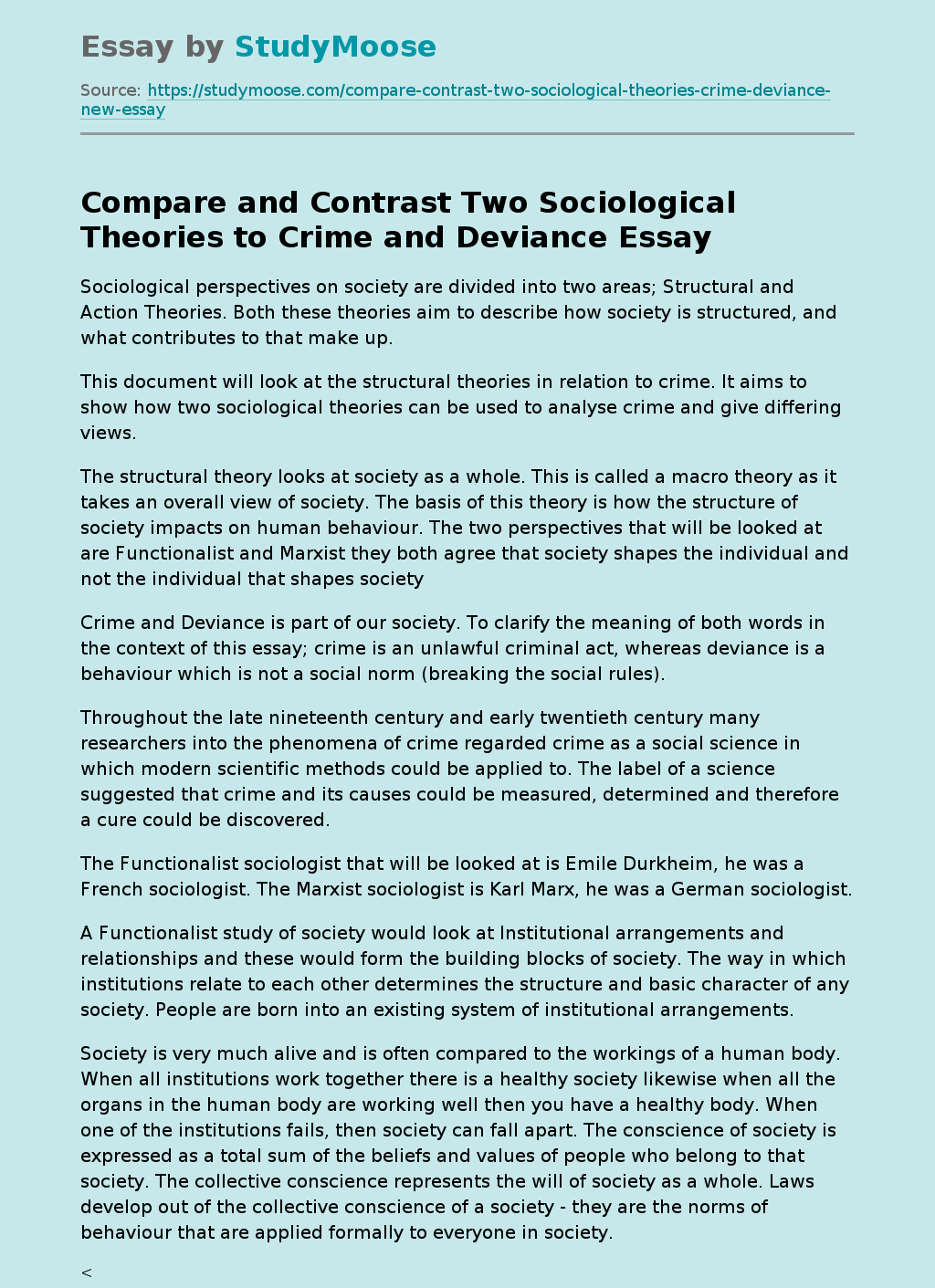