“A man approached the gates of heaven and asked to be admitted. ‘Tell me one good thing you have ever done in your life’, said St Peter. ‘Well’, said the man. ‘I saw a group of skinheads harassing an elderly lady and so I went over and kicked the leader in the shin’. Impressed, St Peter asked when this act of bravery had occurred. ‘About 40 seconds ago,’ came the response.” (Cardwell, Clark & Meldrum 2001)

Bystander apathy (effect) can be defined as a tendency for people to more likely act in an emergency or come to the aid of other when they are alone, or conversely, the lesser likelihood of an observer to help people in trouble if other people are present.

Don't use plagiarized sources. Get your custom essay on
“ Compare and Contrast two theories of Bystander Behaviour ”
Get custom paper
NEW! smart matching with writer

(Corsini 1999). There have been many theories surrounding bystander behaviour; two prominent examples are Latanï¿½ and Darley’s (1970) Cognitive model and Piliavin et al.’s (1981) Bystander-calculus model. These theories have been widely discussed and have many similar and contrasting ideas.

Latan and Darley’s cognitive model of bystander behaviour is considered a classic theory in psychology; it uses a five stage model to show that bystander intervention depends on the outcomes of a series of decisions.

These stages progress from whether the bystander notices the incident to determining whether their intervention would put them in danger. The model argues that a person’s response could be inhibited at any time during the five stages, examples of these are; audience inhibition, social influence and norms, and diffusion of responsibility. (Latan & Nida 1981).

A series of experiments were conducted in support of this theory. Latan and Darley (1970) carried out an experiment whereby male participants were invited to discuss some of the problems involved in life at a large university. While they were completing a questionnaire the room was filled with smoke through a wall vent. Participants were either alone, with two other participants they did not know, or with two confederates who completely ignored the smoke.

Latanand Darley wanted to establish how the participants would react and how long they took to do it. The results showed that the hypothesis that people in such situations look to others around them to decide what to do was correct. 75% of the participants that were alone took positive action, 38% of the two-stranger groups reacted the same way, and only 10% of participants grouped with two confederates acted. Latan and Darley concluded that the presence of others can inhibit people from responding in an emergency; the more people, the slower the response. (Hogg & Vaughan 2002)

In terms of evaluating Latan and Darley’s model, Schroeder et al. (1995) believe that this model provides a valuable framework for understanding Bystander behaviour. Although this model was originally designed to explain intervention in emergency situations it has been successfully applied to many other events. However, it doesn’t provide a complete picture; it doesn’t tell us why these ‘no’ decisions are taken at any of the five steps, particularly when the situation has been defined as an emergency and personal responsibility has been accepted. Also, as Dovidio (1995) points out, the model focuses on why people don’t help others – why people do intervene needs to be considered and research has shown that Piliavin et al.’s (1969,1981) Arousal-Cost-Reward Model investigates this.

The second major theory surrounding Bystander Behaviour is the Arousal-Cost-Reward Model formulated by Piliavin et al. (1969, 1981). This theory was first developed in 1969 as an attempt to provide an explanation for the results of the New York Subway experiment. It was later revised in 1981 to cover both emergency and non-emergency intervention.

The Arousal-Cost -Reward theory is a major alternative to Latan and Darley’s (1970) cognitive model; it has been suggested that it is a fine tuning of some of the processes outlined in the decision model by identifying a number of critical situational and bystander variables that help to determine whether the bystander will intervene in various circumstances. However, Latanï¿½ and Darley noted that labelling the failure to help a victim in an emergency is too simplistic as it could be concealing other variables and processes. (Hogg & Vaughan 2002)

In 1981 Piliavin et al. revised the model and began to consider the influence of a new range of variables, such as bystander personality and mood, the clarity of the emergency, victim and potential helpers and the attributions made by potential helpers and the victims deservingness. Although some of these variables are addressed in Latan and Darley’s (1970) cognitive model, they are not focused on to the same extent. 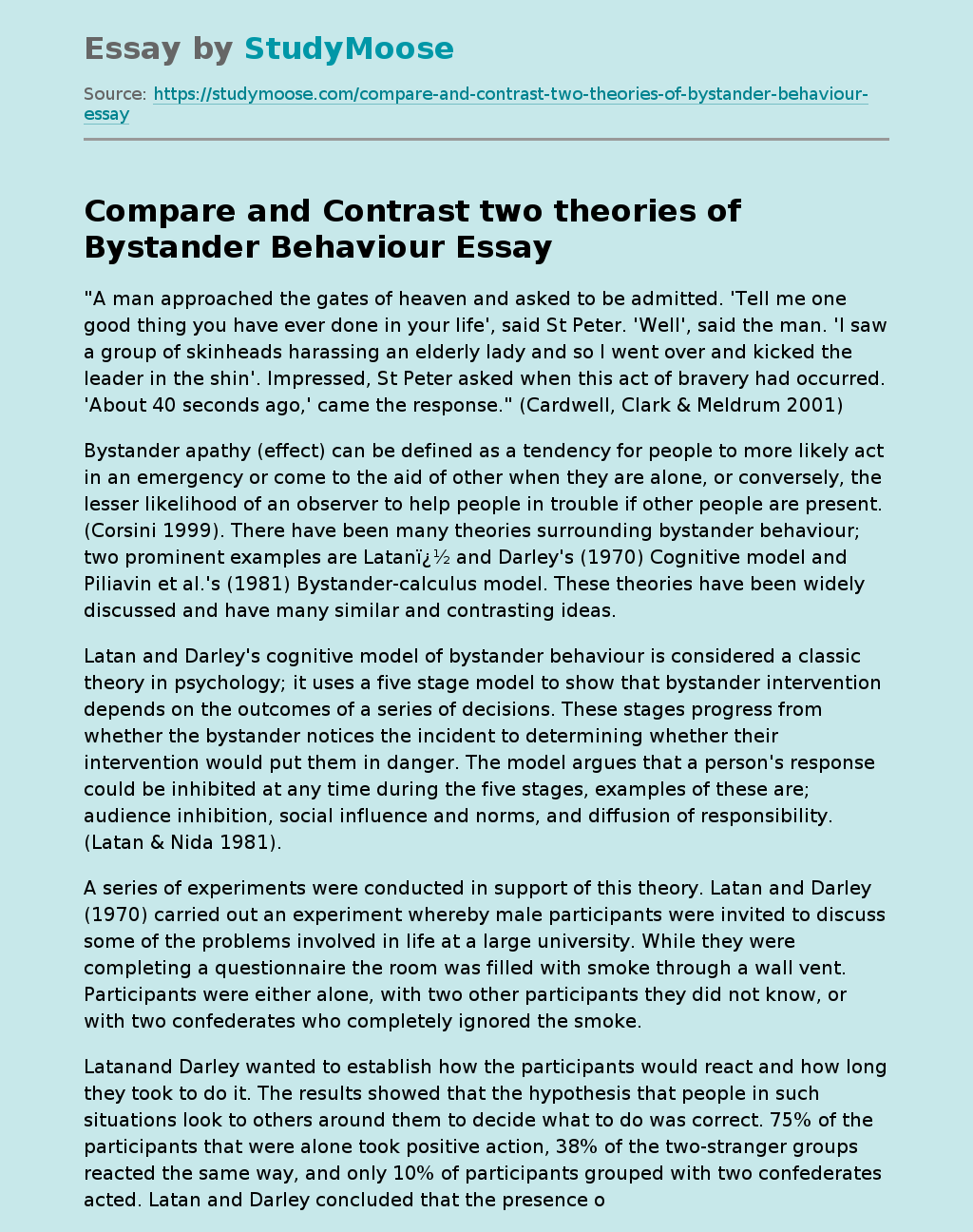