My intention in this essay, is to compare and contrast the following psychological approaches Behaviourism and Psychoanalysis, in doing this I will unpack the key points of these two approaches, highlighting the differences and explaining them.

The first approach I will look at is Psychoanalysis; the most famous psychologist linked to this is Sigmund Freud an Austrian psychologist who first proposed his Psychodynamic approach. These perspectives states, that there are three main sections to the human psyche. The first is the “ID” this is the natural drive, which seeks gratification constantly, the second is the “EGO” this is our personal set of values developed as children, and finally the “SUPEREGO” a set of learned values, taken from society and our parents rules and values.

Turn in your highest-quality paper
Get a qualified writer to help you with
“ Compare and contrast two psychological approaches ”
Get high-quality paper
NEW! AI matching with writer

Another element of Freud’s theories was his studies of dreams; Freud believed that dreams acted as a form of fantasy, a defence mechanism against the unacceptable urges of the id. Fantasy allows the individual to act out events in the imagination, which can satiate the urges of the id, which are repressed. Freud theorized that dreams were a subconscious manifestation of these repressed urges, and that they served mainly to satisfy sexual and aggressive tendencies

The other theory I will refer to is Behaviourism; this is an approach, which states that all psychology must be directly measurable and recordable, if it is to be regarded as scientific.

In his 1924 book Behaviourism, Watson made the notorious claim that, given a dozen healthy infants; he could determine the adult personalities of each one, “regardless of his talents, penchants, tendencies, abilities, vocations and the race of his ancestors.” While making such a claim seems ridiculous today, at the time Watson was reacting to emerging Freudian psychoanalytical theories of development, which many people found threatening. Watson’s scheme rejected the entire hidden, unconscious, and suppressed longings that Freudians attributed to behaviours and posited that humans respond to punishments and rewards. Behaviour that creates positive responses is reinforced and continued, while behaviour that creates negative responses is eliminated.

An important component of many psychological theories in the late nineteenth century, including psychoanalysis was “introspection”, the study of the mind by analysis of one’s own thought processes. It was in reaction to this trend that behaviourism arose, claiming that the causes of behaviour were not founded in the mind, but rather that they were the results of conditioning and responses to stimulus. Behavioural theorists emphasize that behaviour is a result of a process of learning from observing. What actions pay off and what works. This theory simplifies human behaviour by neglecting the many other influences on us, many of which are vital to the psychoanalytic theory. In direct conflict psychoanalysis uses introspection as the basis for all theory stating that behaviour is caused by childhood experiences, to quote Freud “the boy is father to the man”.

Another difference is found when you look at research methods. Psychoanalysis is based around introspection and as such has very little research, due to the fact that the theory has very little testable data, it can neither truly be proved nor disproved. Behaviourism tested and researched ideas before they were published, all of the research was directly observable and and testable, this was due to the basic aim of behaviourism, which is to produce analysable and scientific results.

The research done by the approaches differ as much as who they are studying behaviourism focuses all of its attentions upon animals and how their behaviour equates to human behaviour. The reasons for this focus of experimentation was stated by theories being made on the evolution of creatures scientists such as Charles Darwin were stating that all life found on earth descended from basic organisms, due to this behaviourists of the period believed that any reaction from a animal could be observed in humans as all creatures “evolve” from one another.

The techniques used for Freud’s research, were based around introspectional research into members of the public, the problem however was that Freud lived in a place where the only willing volunteers for research were Jewish housewives, as such Freud’s research can be critised as it focused mainly on one (extend)

As time has gone by both of these theories have received critism from various sources, and their views have been expanded and changed by psychologists who came after them.

Since Freud first described his psychodynamic theory, Freud and his psychoanalytic theory have faced intense criticism. His most famous critic is Jung, a former college. Jung started to disagree with Freud in 1913 over many of the key of issues to the theory, including amongst other points, Freud’s emphasis on children’s sexuality and its importance in early development. Jung had a different view of the construction of human personality, for instance, and had different ideas about how dreams should be interpreted and viewed as part of psychoanalysis, dreams of course being very important to the study of Psychoanalysis; they were seen as to quote Freud ” a window to the subconscious”.

Alfred Adler, another college of Freud, also disagreed with the masters view of childhood sexuality, instead he believed that infants and children are driven mainly by a need for acceptance and praise rather than sexual gratification. In modern times, Freud has been the target of criticism from many corners. Feminists especially criticize his understanding of “hysteria” and his theory of Oedipal conflict, they deny that a child would think and seek to act in this way.

Basically the main criticisms of Freud’s theory are that it is based too much in studying sexual urges and the need for gratification. Also many people believe that Freud had no real proof for his theories and they were too much based around introspection. His theories have been expanded and criticised by his peers, Jung, Adler ECT, and their theories although still psychoanalytic list the influences on behaviour as society and a persons environment.

Much of the research done in Behaviourism was done prior to john Watson championing the term “Behaviourism” in his 1924 book.

Edward Thorndike (1874-1949) initially proposed that humans and animals learn behaviours through the association of stimuli and responses. He stated two laws of learning to explain why behaviour occurs the way that it does: The Law of Effect specifies that any time a behaviour is followed by a pleasant outcome, that behaviour is likely to recur. The Law of Exercise states that the more a stimulus is connected with a response, the stronger the link between the two.

Ivan Pavlov’s (1849-1936) carried on work on classical conditioning also he provided an observable way to study behaviour. Although most psychologists agree that neither Thorndike nor Pavlov were strict behaviourists, their work paved the way for the emergence of behaviourism.

Later the behaviourist approach was taken up by B.F. Skinner (1904-1990) who worked out the evolution of human behaviour by observing the behaviour of rats in a maze, where certain actions lead to different consequences In the 1950s, however, the popularity of behaviourism began to decline.

Behaviourism is very difficult to crititse as unlike other approaches the data is not open to interpretation. As such the theory has received very little crititsm over the years.

One of the main critisms was made by Noam Chomsky (1928), an expert in speach, who demonstrated that the behaviourist approach simply could not explain the way a child picks up its native language. Today, many psychologists debate the extent to which cognitive learning and behavioural learning affect the development of personality. Also much of the research done by behaviourists would not be possible in the present day as the general public are much more aware of issues of cruelty to animals.

Both of these theories have one key element, which is shared. Namely both have inspired and been the basis of therapies, which are still used to aid a variety of problems.

From psychoanalysis, psychotherapy grew. Psychotherapy is a way of treating psychological or emotional problems, through talking both about the issue and about other issues. The main focus is to talk the patient through their experience hoping to discover the personal feelings, relationships, and events that have created their vegetative behaviour. Freud first used this therapy whilst living in Austria where he was a practicing physician specializing in neurological disorders. When Freud could find no physical cause for an illness, he would experiment with this new therapy and in this way he found it extremely useful. It is now used widely across the world and is even a recommended treatment in the NHS.

Behaviourism has led to other therapies, mainly treatment for phobias. Classical conditioning is also the basis for different types of fears or phobia, which can occur through a process called stimulus generalization (a child who has a bad experience with a particular dog may learn to fear all dogs). Although classical conditioning is the cause of many phobias, classical conditioning can also help eliminate them through a variety of therapeutic techniques. One is “systematic desensitisation”, in which an anxiety-producing stimulus is linked with a positive response. The opposite result (making a desirable stimulus unpleasant) is obtained through “aversion conditioning” therapy, in which a behaviour that a person wants to stop e.g. an addiction, such as alcoholism is paired with an unpleasant stimulus, such as a nausea-producing drug.

So in conclusion, no one theory can be proven either correct or incorrect, as elements of each are useful and effective in modern life. Psychologists will constantly expand these theories and critism will continue, for as long as the debate rages on.

Psychology for A level by Mike Cardwell, Liz Clark and Claire Meldrum (2000) 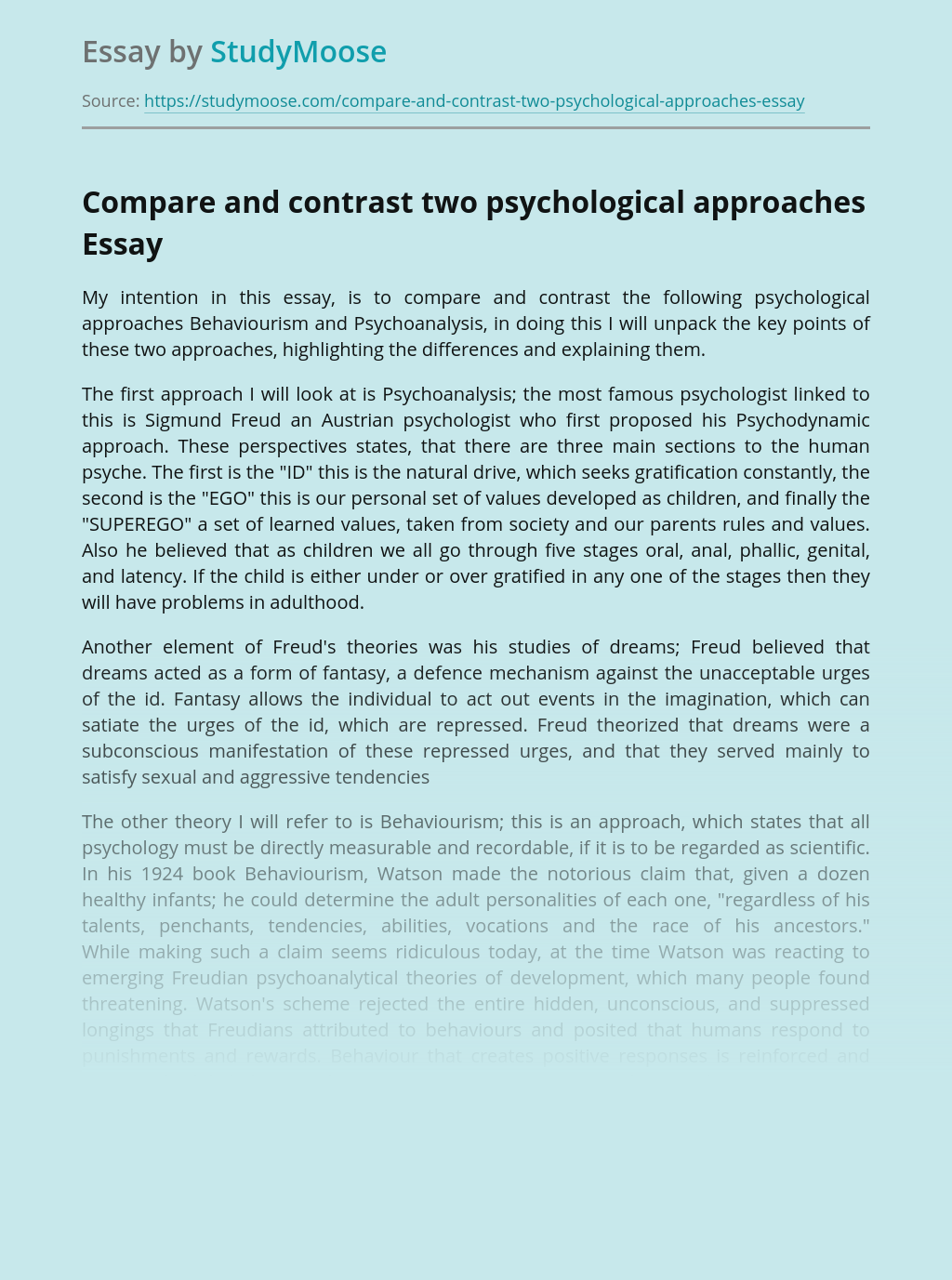 Turn in your highest-quality paper
Get a qualified writer to help you with
“ Compare and contrast two psychological approaches ”
Get high-quality paper
Helping students since 2015
Stay Safe, Stay Original