Don't use plagiarized sources. Get your custom essay on
“ Assess the usefulness of Marxist approach to an understanding of crime and deviance’ ”
Get custom paper
NEW! smart matching with writer

. And therefore those in poverty that cannot afford necessities such as food result in utilitarian crimes (crimes with a purpose) for example theft In order to survive. Another way that capitalism causes crime is due to capitalism advertising products encouraging the false need and desire for consumer goods. A false need makes an individual believe that they need a product when in reality they don’t, for example cars, phones etc.

They can achieve this through the media for example TV advertisements and billboards, because people believe this is what they need if they cannot afford it legitimately then they may turn to crime. Thirdly capitalism can cause crime through alienation (individuals feeling isolated from the rest of society) as a lack of control of their lives may lead to crimes of violence and other non utilitarian crimes without a purpose for example domestic violence etc. This could occur whereby a partner feels frustrated with his social position and therefore takes it out on members of the family etc.

This leads to crimes from all different classes. The wealthy commit crimes such as fraud and tax invasion, statistics just don’t show this as much. David Gordon 1976 explained this as he said crime is a rational response to the capitalist system and is found in all social classes, even though statistics make it look as though it is concentrated amongst the working class. Here David Gordon is explaining that crime is just a response to the way society is run, that it is the capitalist structure of society that creates these crimes, and that even though statistics represent more working class as the criminals, in reality all classes are guilty of crime.

Traditional Marxists also proposed the theory that law making and law enforcement can have an effect on crime in society as law making and enforcement serves the interests of the capitalist class. The ruling class have the power to change laws, prevent laws and enforce laws. An example of when we have seen how quickly laws can be enforced by the ruling class was during the summer riots in 2011 when laws were quickly passed through parliament to give police powers to force individuals to remove headwear.

This shows that it is the ruling class that have power and therefore laws are based on the ruling class views not considering the working class opinions. As well as this Marxists also argue that certain types of crime are likely to be dealt with more rigorously than others. For example street crimes such as assault and theft are more likely to be pursued by the police than white collar crimes such as fraud.

As well as defining individuals as ‘social failures’ directing the blame away from the system. And thirdly defining criminals as ‘animals’ and ‘sick’ for example, justifying putting them in prison. Keeping these individuals out of the public eye allows us to forget why the crime occurred needed to help us solve the problems. Traditional Marxists also explore the ideological nature of the law; this function is valuable in allowing the ruling class to maintain their position of wealth. This process is what Althusser named the ideological state apparatus. This includes the school and the variety of forms of media, and it is through these that the ruling class is able to socialise individuals into accepting ruling class ideology.

ISAs are responsible for promoting ruling class values of self interest and competition and as a result create a society in which basic values support the capitalist political and economic system. Marxists also believe that crime and the law can perform an ideological function by essentially brain washing individuals. For example some laws may appear to benefit the working class for example the health and safety laws at work, but these, according to a Marxist FrankPearce are only there to benefit the capitalists by ensuring a fit and healthy work force. In addition to this by prosecuting a large proportion of the working class it makes it look like the capitalists are caring for its citizens, it also helps divide the working class so many blame each other for crime rather than capitalism.

There are many positives and negatives of traditional Marxist theory in helping us to understand crime and deviance. A large strength is that the theory successfully explains how crime cuts across all social class lines, as it shows evidence of all classes committing crimes. Therefore it is a macro-theory and can be applied to the whole of society making it generalisable. Another strength is that there is a lot of evidence to show the presence of law enforcement, for example it was illustrated through news showing law making over night during the summer riots. However weaknesses of the theory include the fact that the Marxism view underestimates the free will of a criminal by blaming the system, it is too deterministic by over predicting the amount of crime present especially in the working class. Not all those in poverty are committing crime and would never turn to committing crime.

Another New-Marxist theorist Taylor et all challenged the Marxist theory by stating that workers are not driven to crime through economic necessity. They believe that this theory was too deterministic and doesn’t question an individual’s free will. They also go against the interactionist theory and state that young males do not commit crime because they have been labelled. As well as challenging the sub cultural theory by arguing that young males do not commit crime because they are part of a subculture. Instead Taylor suggested his own theory as to why people are lead to committing crimes. He states that people commit crime often because they are angry at capitalism.

They express their anger through crime rather than politics. This suggests that individuals are committing crimes on the basis of being frustrated with the structure of society that they live in and express this frustration through committing crimes, maybe because they don’t feel they will ever be heard through politics etc due to the ruling class having power? Taylor put forward the new criminology theory: a fully social theory of deviance. This includes six main parts. Firstly, the wider origins of the deviant crime. This is in the unequal distribution of wealth and power in capitalist society. A strength of this is that it doesn’t look at a micro situation, it looks at the whole of society.

Secondly, the immediate origins of the deviant crime, this is the particular context in which the individual decides to commit the act. For example in the summer riots people looting due to the immediate origins being anger due to recession, cuts in public benefits of society being closed down for example youth clubs and libraries. Thirdly the act itself and its meaning for the individual e.g. rebellion against capitalism. Fourthly, the immediate origins of social reaction, so the reactions of those around the deviant, for example the police and the family and their reactions to discovering deviance. Next are the wider origins of social reaction in the structure of capitalist society, questioning who has the power to define actions as deviant?

And lastly the effects of labelling on the deviants future actions, for example getting a job. A strength of the Neo-Marxism theory is that critical criminology has forced sociologists to look at the wider social, economic and political factors and it has offered a new approach to how crime is shaped by the individual’s actions within an unfair criminal justice system. However a weakness of the theory is that it is too general to explain crime and to idealistic to be useful in tackling crime. There are numerous similarities and differences between traditional Marxists and neo-Marxists which are useful in helping us to understand crime and deviance. Similarities include the fact they see capitalist society based on inequalities between the social classes and this is a key to understanding crime.

They both agree that the state makes laws and enforce laws in the interests of the capitalist class which is important when considering how classes are represented within decisions of the law and how these decisions can have a different effect on both classes. And they both believe that to prevent crime capitalism should be replaced by a classless society.

However differences between the theories are that neo-Marxists believe that criminals are not passive puppets who’s behaviour is shaped by capitalism this is important in assessing how valuable the Marxist theory is as it puts forward the idea that although a criminogenic capitalist society does effect crime and deviance there are other factors as well. Another difference is that Neo-Marxists use interactionist ideas to see how the behaviour of the victim, offender, media and criminal justice system all interact to influence how the situation developed. Therefore this too exploring other possibilities as to why the crime was committed.

Overall the Marxist theory as whole is valuable in explaining why crime is committed as it looks at the problems in society as to why individuals within our society commit crime. It explores how the very nature of our society can cause these crimes by looking at all different perspectives for example through the criminal justice system, poverty, media and advertising etc. It also has explanations for both utilitarian and non utilitarian crimes and can be applied to the whole of society as it also explores white collar crime and not just crimes committed by the working class. Therefore the fact that it is a macro-theory makes it very useful as it is easily generalised. Overall the theory as a whole is very strong in helping our understanding as why crime exists.

Assess the usefulness of Marxist approach to an understanding of crime and deviance’. (2016, May 26). Retrieved from http://studymoose.com/assess-the-usefulness-of-marxist-approach-to-an-understanding-of-crime-and-deviance-essay 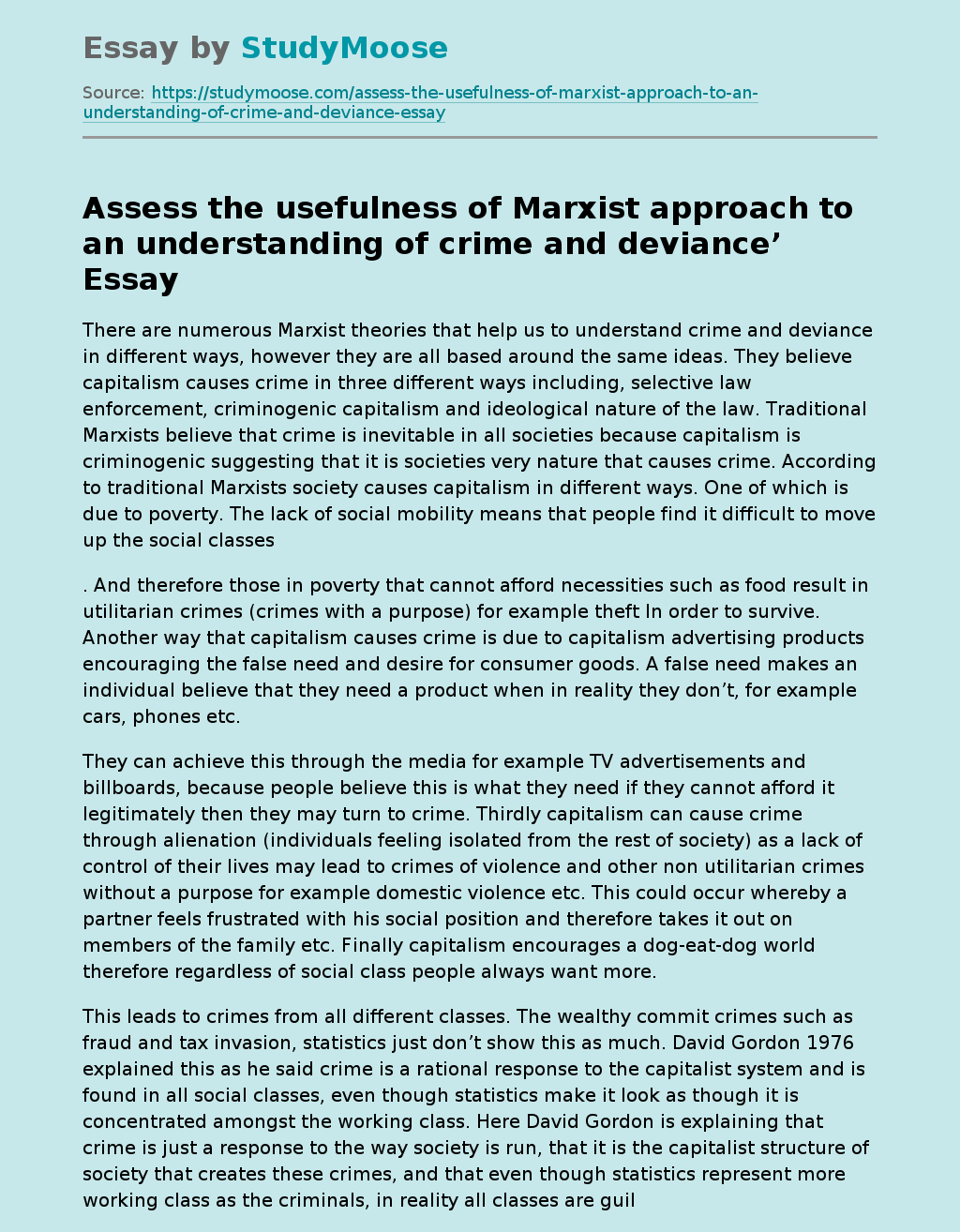