Usefulness of Scandals for Politics and Society

Scandals have been imminent in the society from times immemorial. A scandal represensts any illegitimate or unethical behaviour or event that is unacceptable to the people of the society. Scandals often highlight certain issues which affect a large section of the society and are a matter of great concern. They not only bring out the weaknesses of a social system but also direct the attention of the society to areas which might have been overlooked in the course of civilization. Thus, I am in complete agreement with the case that scandals are important as they direct our attention to problems in ways that no speaker or reformer ever could.

Don't use plagiarized sources. Get your custom essay on
“ Usefulness of Scandals for Politics and Society ”
Get custom paper
NEW! smart matching with writer

Scandals actually play a significant role in addressing issues which might have been overlooked by the reformers or the stalwarts of the social system. As a society progresses with the opening of new avenues for advancements, people often tend to overlook certain situations which might seem so mundane and ordinary that it is felt that those situations do not need exegesis.

It is true that people learn from their mistakes. However pragmatic a society might be, unless confronted with the situation of a problem it doesn’t tend to pay attention to it. In the 1970s the Watergate scandal of the U.S led to the resignation of the then President Richard Nixon. There was a break-in at the Watergate building, in Washington D.C and the prowlers traced back to Nixon’s re-election campaign. Even though it wasn’t established that Nixon had a prior knowledge about the espionage but later he did try to cover it up, which eventually led to his resignation.

This event increased the level of scrutiny and accountability for the positions held by the public offices and thus it changed the way the system operates. If the scandal had not occurred there are chances that the political systems might have continued with their practice of misappropriation. Similarly the Clinton-Gore scandal led to a renewed call for campaign finance reform.

When a scandal breaks out it affects a large section of the people. Thus finding a solution to it becomes all the more difficult and necessary at the same time to restore law and order in that situation. Reformers and speakers often yield solutions to problems that might be hypothetical, but when a scandal breaks out the leaders actually struggle to find a breakthrough to resolve the issue. Scandals and existing problems are useful for us in a way since they help in focusing our attention more towards the problem and its solution. In India , there was a food grain scam in the state of Uttar Pradesh(2002-2010) where-in food grains worth rupees 35,000 crore meant for distribution to people living below the poverty line (BPL) was sold in open market. More recently the coal-gate scam where-in coal blocks meant for auctioning were allocated to influential people signifies how corruption has strongly gnawed into the very assets of the social system. However if these issues had not assumed the form of a scam it’s quite unlikely that such issues like allocation of the resources might have been a cause of concern for the people. On the contrary people might have assumed that the working of the society is perfectly utilitarian not paying any heed to such issues.

Thus it becomes evident how scandals play a pivotal role in addressing certain significant issues of the society. It is the responsibilty of the society to bring out the best of such situations so that the society grows stronger. A scandal might be seen as a malaise but what is more important is the lesson it drives home. Scandals reveal the weaknesses of a social system , but at the same time the society must bear the onus of such weaknesses and strive towards extricating itself from the realms of such issues and emerge as a stronger entity. Only then can the civilisation progress.

Usefulness of Scandals for Politics and Society. (2016, Apr 01). Retrieved from https://studymoose.com/usefulness-of-scandals-for-politics-and-society-essay 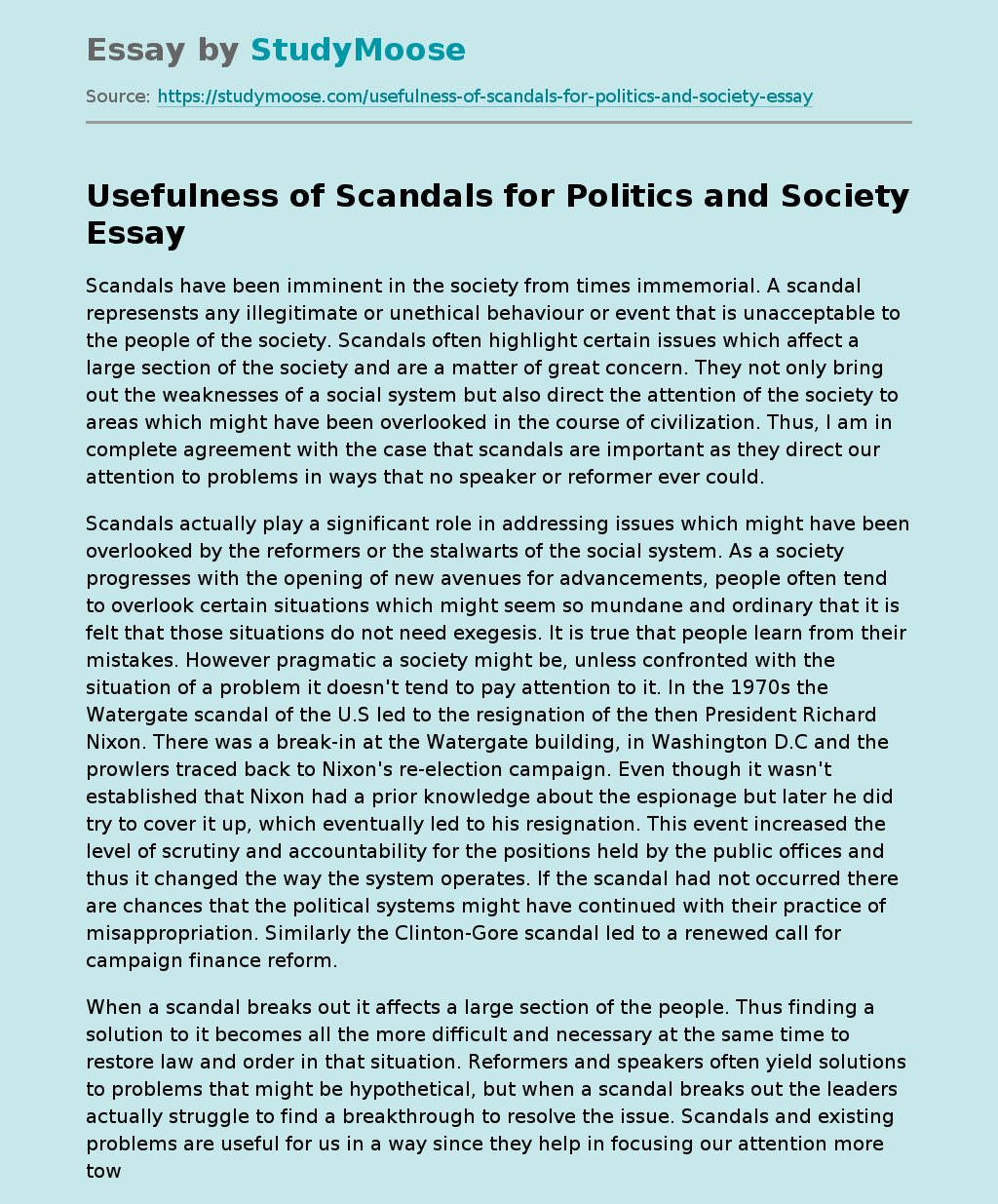