The Sarbanes-Oxley Act of 2002, often abbreviated as SOX, is a legislative act passed by Congress in response to the Enron and WorldCom financial scandals. The primary purpose of SOX is to protect shareholders from errors or fraudulent reporting by the company they have invested in. The Sarbanes-Oxley act is enforced by the Securities and Exchange Commission, a department dedicated to ensuring compliance to SOX from all firms, and is also responsible for revising provisions of the act in order to keep it current and up to date.

Don't use plagiarized sources. Get your custom essay on
“ The Sarbanes-Oxley Act ”
Get custom paper
NEW! smart matching with writer

The Enron financial scandal showed the public and their representatives in Congress that compliance with current reporting policies were poorly followed, if not ignored completely. Enron, an energy trading company, was believed to be one of the most financially stable companies to invest in, so when it was discovered that it had been fraudulently reporting its numbers, many investors lost the money they had placed in the company. It became apparent that a new set of regulations needed to be passed, with more up-to-date policies regarding electronic reporting.

Since technology was advancing at a rapid pace, it was crucial that the new policies be able to evolve with the electronics, or they would soon be out-of-date. Senator Paul Sarbanes and Represenatative Michael Oxley partnered to draft the act prior to 2002.

Their goal was to develop legislation that would protect consumers, mainly investors, from companies who would fraudulently report accounting numbers to avoid taxes, regulations, or other barriers that kept the company from maximizing it’s profits.

The SOX Act holds company CEO’s and CFO’s responsible for the information presented by their company in financial statements. It created new standards of accountability for corporations as well as penalties of those standards of accountability are not met. SOX established new financial reporting standards. SOX also addressed the way, and changed the way, corporate boards deal with their financial auditors. The auditors for Enron, Arthur Andersen, were initially found complicit in the Enron scandal, which caused the break-up and bankruptcy of the company. The Supreme Court, however, overturned that decision a few years later, but not in time to save the company. All companies, according to SOX, must provide a year-end report about the internal controls they have in place and the effectiveness of those internal controls. A company found to be in violation of SOX regulations is met with very stiff penalties. False reporting endangers investor’s hard earned money.

These penalties vary with the part of the act that is violated, and range from large monetary fines, to suspension from the stock exchange, to the ultimate punishment of being shut down due to bankruptcy. The penalties were designed to be harsh to discourage deviance from the rules set forward in Sox, and to prevent another huge scandal like Enron. Although imperfect, the Sarbanes- Oxley Act provided security to the general public when investing money. The percent of companies complying with the act has remained extremely high due to it’s adaptability in a rapidly advancing technological environment. There is still much room for improvement in the reporting process but the Sarbanes- Oxley Act of 2002 was a good starting point. 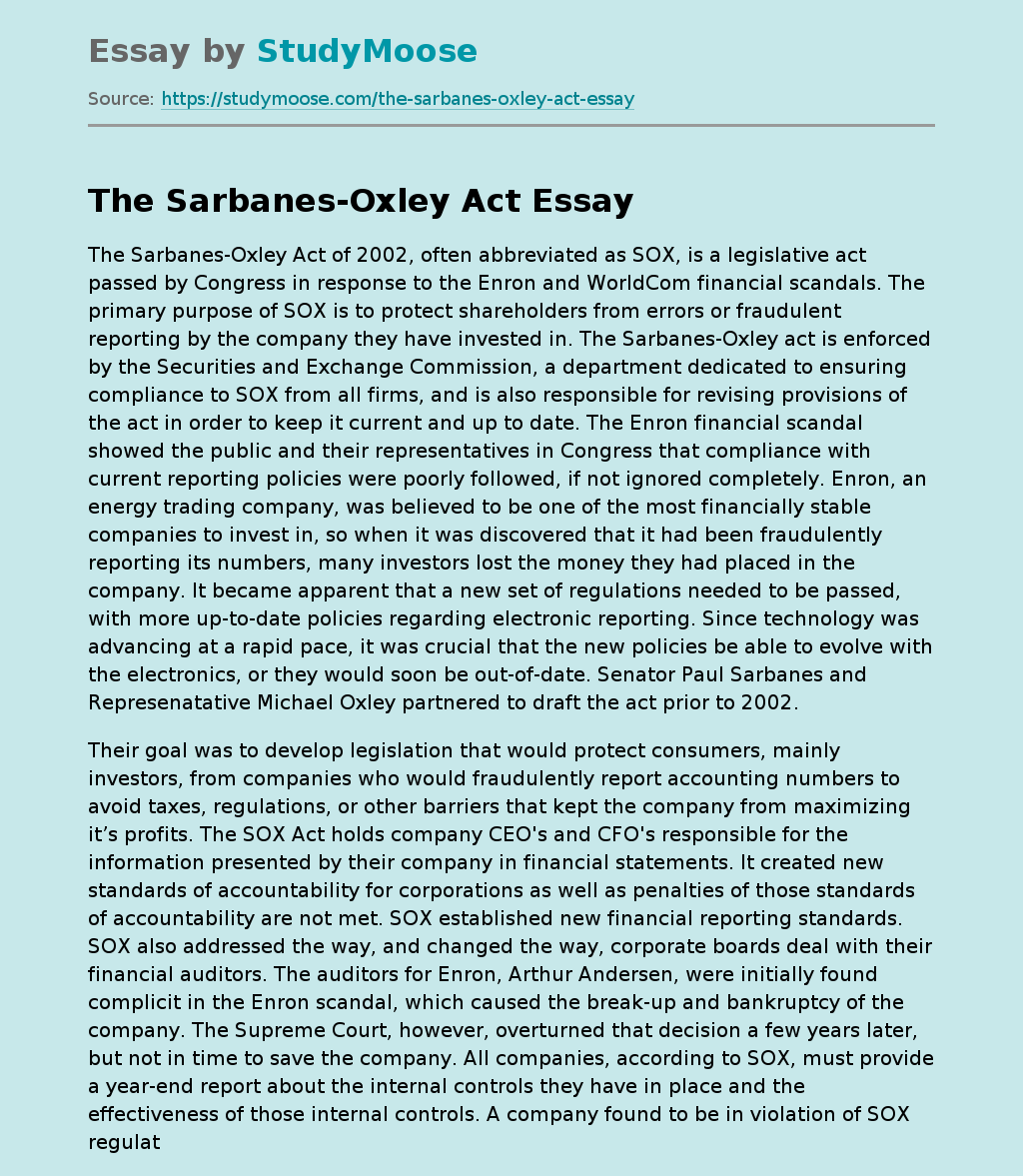