Accounting Scandals in the early 2000s

During the early 2000s, the role of accounting and the auditing profession changed and several accounting scandals were uncovered.

a.What conditions caused accounting and the audit profession role to change during this time?The Enron scandal is one of the biggest from the early 2000s. Everything about this fiasco is huge, including a $50 billion bankruptcy, and employee retirement accounts drained of more than $1 billion. Enron’s auditor, Arthur Andersen, was indicted on criminal charges in 2002 as a result. Arthur Andersen was assigned to Enron as both internal and external auditor.

While working on internal controls, they had to attest to their own figures. This resulted in huge doubts being placed upon the accounting profession. Additionally, earnings restatements doubled between 1997 and 2000, and Enron reported $600 million in losses. Investors were also losing on market capitalization from audit failures.

b.What major changes occurred as a result of the accounting scandals at that time?The Sarbanes Oxley Act of 2002 (SOX) was created in response to the large corporate scandals, including Enron.

SOX was engineered to set rules for compliance. The stringent new rules were put in place “to protect investors by improving the accuracy and reliability of corporate disclosures made pursuant to the securities laws, and for other purposes” (SOX, 2002). The most fundamental reform of SOX was the Public Company Accounting Oversight Board (PCAOB), which was created to oversee auditors of public companies in order to protect the interests of U.S. investors. Arthur Anderson went out of business following their decline and indictment, and this was the second major change that occurred as a result of the Enron scandal.

Accounting Scandals in the early 2000s. (2016, Jul 17). Retrieved from http://studymoose.com/accounting-scandals-in-the-early-2000s-essay 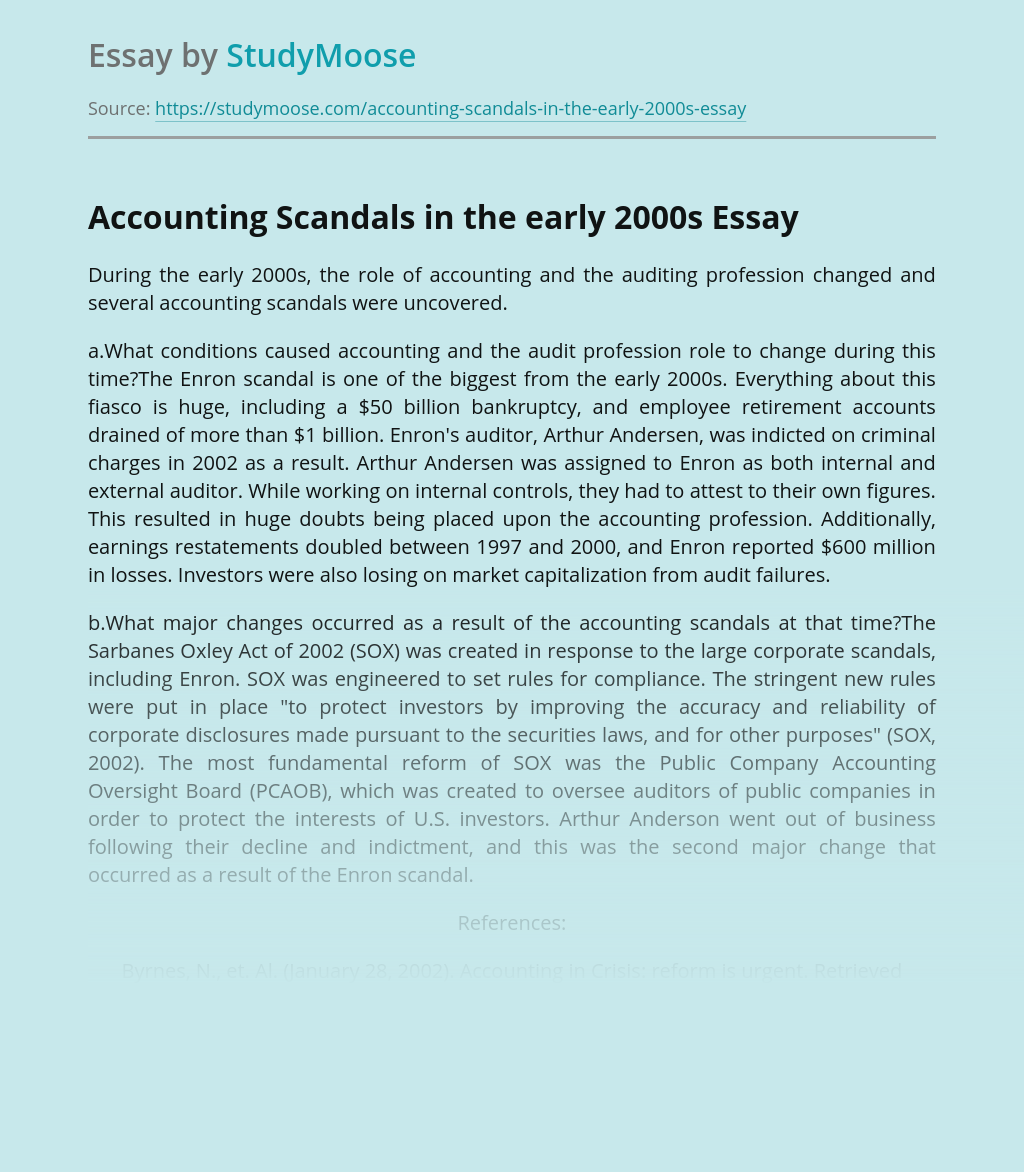 Don’t waste time
Get a verified writer to help you with Accounting Scandals in the early 2000s
Hire verified writer
$35.80 for a 2-page paper
Stay Safe, Stay Original