1. CITATION.
Ermogenous v Greek Orthodox Community of SA Inc. [2002] HCA 8; 209 CLR 95; 76 ALJR 465; 187 ALR 92 (7 March 2002) 2. COURT.
HIGH COURT OF AUSTRALIA
FULL COURT
GAUDRON, McHUGH, KIRBY, HAYNE and CALLINAN JJ
ERMOGENOUS, Spyridon APPELLANT
v
GREEK ORTHODOX COMMUNITY OF SA INC RESPONDENT
3. BRIEF STATEMENT OF MATERIAL FACTS.
[1] The appellant alleged that he had been employed by the respondent since 18 March 1970 but had not received any entitlements to annual leave or long service leave upon termination of his employment in December 1993. The Magistrate from the Industrial Relations Court of South Australia found in favour of the appellant in the first instance but the Supreme Court of South Australia overturned the Industrial Magistrates ruling at the first appeal.

It has been re-appealed to the Full Court of the High Court of Australia. 4. PROCEDURAL HISTORY.

[3] The respondent’s statement that there in fact was no contract of employment was rejected on the grounds that the appellant was recruited from America for the purpose of appointment as Archbishop and the role as head of the Australian autocephalous church. He met with “members of the committee of management of the South Australian Community” and at such a time an agreement was reached that he “would be paid similarly to the priest” and would be referred to as one of the “employees”.

[5] The decision of the Industrial Court was appealed to the Supreme Court of South Australia whereupon the case was heard by Doyle CJ and Bleby J. It was proposed that the presence of intention to enter into contractual relations should not be presumed, particularly when considering “remuneration and maintenance and support of a minister of religion”. [6] The Supreme Court reconsidered the Industrial Magistrates ruling that the parties had entered legal relations and had shown intention to do so. [7] His Honour Doyle CJ stated that “it is important to bear in mind that the [respondent] is not a church, in which the [appellant] held a clerical office… The [respondent] is a body that fosters Greek culture in South Australia in the broadest sense”. He later went on to say “[i]n considering the inference to be drawn from the discussions in Adelaide, it is also relevant that the [appellant] was not providing services to the [respondent], but to members of the local Greek Orthodox Church”. 5. GROUNDS FOR APPEAL AND/OR ISSUES TO BE DECIDED.

[8] Four issues were raised as the grounds for appeal. The first being whether the Full Court of the Supreme Court of South Australia had erred in any way in their decision that the Magistrate of the Industrial Relations Court of South Australia failed in considering if enforceable contractual relations had actually been entered into by the parties. [9] Secondly, relevant upon a negative decision of the first issue, whether the Supreme Court failed to consider the Industrial Magistrate’s reasons for deciding in regards to the issue of intention to create legal relations. [10] The third issue brought to the attention of the court was whether the Industrial Magistrate erred in his reasoning that enforceable contractual relations had been entered into by the parties on the consideration of the spiritual profession of one, or both, of the parties. [11] The final issue raised in the grounds of appeal was whether the Industrial Magistrate was correct in concluding that the parties had indeed entered into a contractual relation, being a contract of employment. 6. SUMMARY OF COURT’S ANALYSIS OF LAW.

[12] The Court agreed with the Industrial Magistrate’s rejection of the proposition “that the relationship of a minister of religion to those who provided for the minister’s necessities of life was, of its nature, incompatible with a contract of employment”. [13] As mentioned in Intention & Privity (2007), “discerning intention warrants intricate analysis of the facts – intention cannot be presumed purely based on the context or type of the agreement”. Similarly, the court considered the following matters: What was the subject matter of the agreement? What was the status of each party to the formation of the agreement? And, what was the relationship the parties held to each other? [14] The Archbishop was successful in establishing a ‘meeting of the minds’ during the initial talks and negotiations held in Adelaide in 1970 and as a result the Court found in favour of the appellant and that a contract of employment had been entered into between the parties and further was enforceable by law. 7. PRINCIPLE OF LAW TO BE APPLIED.

[15] The principle of law to be applied to the case is ‘intention to create legal relations’ and whether relationships involving the basis of religion would have an effect on the existence of a contractual relationship. [16] Their Honours made note that “it is said that it may be presumed that there are some “family arrangements” which are not intended to give rise to legal obligations and it was said in this case that it should not be presumed that there was an intention to create legal relations because it was a matter concerning the engagement of a minister of religion. For our part, we doubt the utility of using the language of presumptions in this context. … Reference to presumptions may serve only to distract attention from that more basic and important proposition.” 8. DESCRIPTION OF HOW LAW APPLIED TO THE FACTS.

[17] The character of the employment arrangement is continuously evolving, but in this case, their Honours interpreted the respondent’s actions: the respondent arranged to have income tax deducted from the appellant’s salary as well as issuing to the appellant cheques for travel and a variety of other incurred expenses. It was then reasonable to conclude that both parties had in fact entered into contractual relations of an employment nature which is enforceable at law. 9. DECISION.

[18] The case was found in favour of the appellant with the first issue raised being decided in the affirmative, leaving the second issue non-existent as it does not arise. The decision of the third issue was negative. The fourth issue was remitted back to the Supreme Court for decision under the Full Court. 10. ORDER MADE BY THE COURT.

[19] The appeal was allowed with costs and the issue of “[whether] the Industrial Magistrate correctly held that the relationship between the parties was regulated by a contract enforceable at law, it was, as he found, a contract characterised as a contract of employment”. Remit the matter to that Court for further hearing and determination conformably with the reasons of this Court. 11. SOCIAL OR CULTURAL CONTEXT.

[20] Maria Keyes and Kylie Burns discussed the social context of the case in Contract and the Family: Whether Intention. They claim that “intention to create a contractually enforceable agreement is regarded as an immovable aspect of modern contract doctrine”. They continued to discuss the case in length, referring to the joint judgement given in the High Court: “The joint judgment recognised that the presumptions had been elevated to such an extent that they had become difficult, if not impossible, to rebut. Their Honours believed–correctly, in our view–that the presumptions of fact, which should merely signify where the onus of proof falls, had ossified into strict rules of law”. [21] Rogers CJ stated in Banque Brussels Lambert SA v Australian National Industries Ltd (1989) 21 NSWLR 502 that “[t]he whole thrust of the law today is to attempt to give proper effect to commercial transactions…. If the statements are appropriately promissory in character, courts should enforce them when they are uttered in the course of business and there is no clear indication that they are not intended to be legally enforceable”. 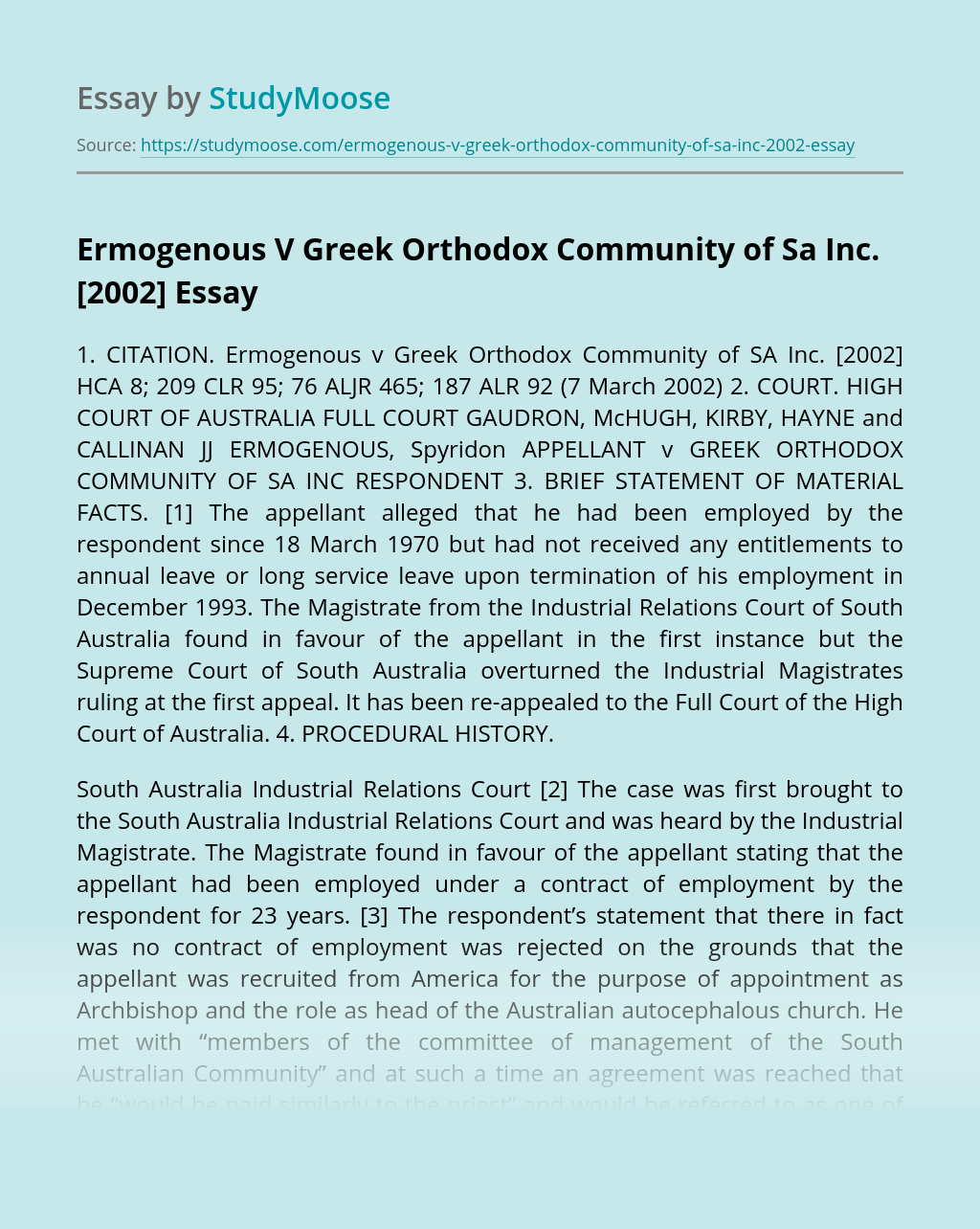