Our world today wasn’t entirely created from recent achievements. We have collected knowledge from ancient civilizations such as Mesopotamia and Greece by studying their history and improving their accomplishments. These cultures have had a major impact on the daily lives of the people in the modern world. Although Ancient Mesopotamia and Greece were some of the earliest civilized cultures, they differ greatly in their achievements and innovations that played important roles for future humans. As the world’s earliest civilization, Ancient Mesopotamia’s innovations continue to affect the world.

Don't use plagiarized sources. Get your custom essay on
“ Ancient Mesopotamia and Greek inventions ”
Get custom paper
NEW! smart matching with writer

It made vital contributions in fields like science, mathematics and astronomy; they even developed a writing system. The early Mesopotamian civilization was known for inventing the first 30-day lunar calendar. Using the phases of the Moon, they counted 12 lunar months as a year. Moreover, Mesopotamians first observed a seven-day week. The invention of the calendar was a remarkable contribution that later had a major influence on our modern calendar.

The Mesopotamians also developed mathematics to a very advanced level and created the sexagesimal system for the calculation of time and angles.

This system is still practical, because of the multiply divisibility of the number 60. For example, in modern times we still use 60-minute hours, 24-hour days and the 360-degree circle. The Mesopotamians developed theories to measure the area of solids and shapes, and the circumference of circles. The Mesopotamian’ s achievements laid many of the foundations for modern mathematics. One of the most remarkable contributions was the development of the first historically significant writing system of the Middle East known as cuneiform.

They wrote with a stylus on special tablets of soft, wet clay, because it was the perfect surface on which to leave marks. The fact that people started to use soft clay not only for bricks and jars, but also for the writing, implied their intellect and potential future progress. Cuneiform was not a language; however, it was the most widespread writing system in the ancient Middle East, which helped us to learn more about the Mesopotamian history and culture. Another civilization that made numerous influential contributions was Ancient Greece.

The Greek civilization was famous for many admirable scholars who were recognized for remarkable achievements in the areas of math and science, medicine and architecture, which gave a rise to further discoveries by following generations. The Greeks were engaged in mathematical study of logic; they provided one of the first proofs in mathematics and discovered irrational numbers. Even today, people still use the Pythagorean theorem, to understand and measure triangles. Greeks achieved such great progress in mathematics by using deductive reasoning, which also helped in every other discipline. Hippocrates made one of the most prominent achievements that expanded humankind’s understanding of medicine. He was the “father of medicine”, who determined the natural causes of diseases rather than blaming them on the gods punishments, and then established procedures for medical treatment. Hippocrates’ modern concepts like diet, rest, and a clean environment were believed to be beneficial for the human body to heal itself.

Also, doctors were responsible for the patient’s well being and privacy in ancient Greece, and they strictly followed a number of professional ethical standards, later called, the Hippocratic oath. The modern version of this oath is still used today; it confides the ideas that the doctor is responsible for his/her actions in case problems arise. The ancient Greeks created the most impressive and highly distinctive architectural styles that influenced the architecture of the past two millennia. Greek architecture developed three distinct orders, the Doric, Ionic, and Corinthian; their parts and proportions were ordered and coordinated. The design, arrangement and decoration of the columns were remarkable and unique with a pure aesthetic effect. The style of Greek architecture provided the finest and the most magnificent buildings, with constant symmetry, proportion and harmony. Greek architecture can still be seen today. For example, the United States Capitol building and other federal monuments in Washington DC have notable similarities in the design, decoration of the columns with the classic Greek architecture.

The ancient Mesopotamia was the first civilized territory on the globe that “began the history” by inventing a form of writing. The inventions and innovations of this civilization contributed to the evolution of humankind. The ability to write made a great impact on people’s intellectual capacities and potential future success in exploring and studying major concepts that later became fundamental for the future development of the whole humankind. Even though the Mesopotamians were the first who pioneered in mathematical studies, the Greeks’ logical approach to the mathematical problems helped them to excel in this discipline. Moreover they applied this knowledge into other areas of science and technology, which shaped the foundation of Western civilization. Ancient Mesopotamia and Greece civilizations played a key role in the development and progress of our modern world. Without their astounding inventions we wouldn’t be able to succeed in many important spheres of science, mathematics, astronomy and technology. They say there is nothing new under the sun, which means that anything new that we create is merely an improvement on another invention from a previous inventor. 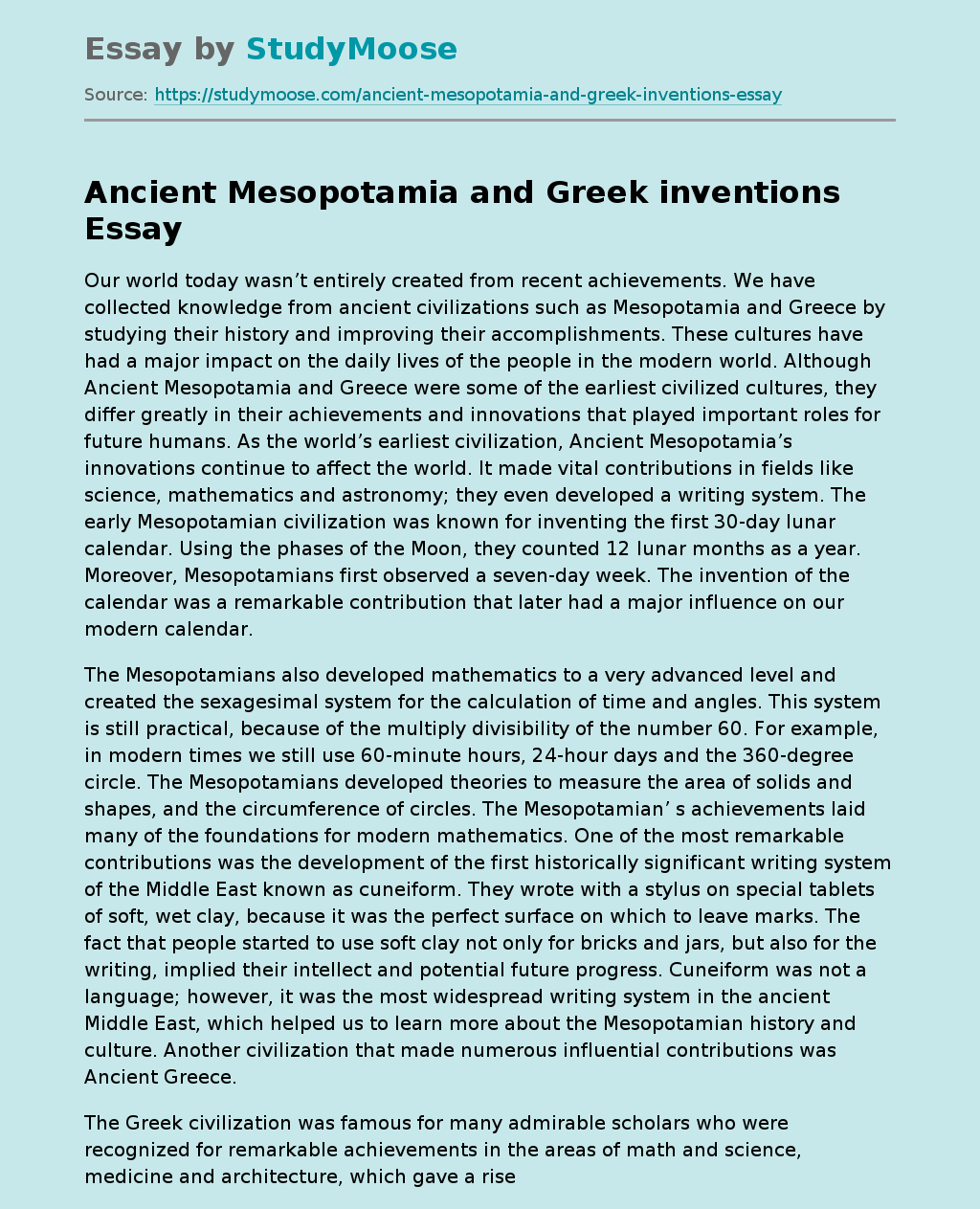