Assess the usefulness of functionalist theories in understanding religion today

Functionalists have put forward their perspective on religion and how it benefits both society and the individual starting with how religion brings people together harmoniously, creating social cohesion and a sense of belonging as people believe in the same thing and all abide by the same rules. Religion creates and maintains a value consensus whilst giving society social order. By conforming to religious beliefs this allows us to gain morals and therefore Functionalists see religion as a positive aspect to society.

Don't use plagiarized sources. Get your custom essay on
“ Assess the usefulness of functionalist theories in understanding religion today ”
Get custom paper
NEW! smart matching with writer

Durkheim defines religion as “a unified system of beliefs and practices relative to sacred things”. He says all societies divide the world into the sacred and the profane. Sacred are things set apart and forbidden, inspiring feelings of awe, fear and wonder. Profane are ordinary things that have no significance. His view on sacred symbols represents society’s collective consciousness which is the shared norms, values beliefs and knowledge that make social life possible; without such consciousness it would crumble.

Participating in shared rituals binds individuals together reminding them that they are a part of a community. Religion defines values as sacred giving the people great power compared to non-believers. Through collective worship society understands the moral bonds that unite them. Durkheim argues that religion functions to reinforce the collective unity or social solidarity of a group.

The individual sees religion performing a significant function allowing them to feel a part of society and strengthens us to face life’s trials and motivates us to overcome obstacles that would otherwise overpower us.

Durkheim used the religion of Aborigines to develop his argument. He calls their religion ‘totemism’, as each clan of aborigines had a sacred symbol called a totem which was a symbol of their gods and of their society which reinforces their sense of belonging. Therefore, he argues the people are really worshipping society. Like Durkheim Malinowski sees religion as reinforcing social norms and promoting social solidarity. In his view it serves psychological functions for individuals helping them cope with emotional stress that would undermine social solidarity.

He argues that death is the main reason for religious beliefs and identifies two types of situations: where the outcome is important but uncontrollable and thus uncertain and at times of life crises events such as birth, death etc. religion helps to minimise disruption. Bellah said civil religions integrates society in ways that individual can’t as it’s able to unite a nation.

For example in USA American civil religion involves loyalty to the nation state and belief in God. It is expressed in many ways such as the national anthem and allegiance to the flag. Parsons says that religion helps people to deal with things that are unforeseen and have outcomes that cannot be changed. There are essential functions of religion in society it creates and legitimates society’s values. It achieves this by sacralising core values such as individualism, meritocracy and self-discipline which promotes value consensus.

Religion also provides a primary source of meaning answering ultimate questions about life which helps people to adjust to adverse events and maintain stability. However, Durkheim’s analysis has been criticised as he only looked at small pre-industrial societies so his views do not apply to complex modern societies. Also he fails to account for the development of new religions some of which reject the norms and values current at the time, for example the Amish. His analysis was based on flawed evidence as he misunderstood both Totemism and the behaviour of the Aborigines. As a result of Durkheim’s research it could be argued that the Functionalist views of religion are not useful.

This is because there may be cultural differences which prevent him from understanding the behaviours displayed in non-western society. Therefore it could lead to results that may be misrepresentative of all viewpoints on religion. His data may not be applicable to today’s society because of the diverse nature of different cultures. Some critics may argue that the Functionalist perspective is outdated and therefore not representative of modern society. They suggest that society needs religion to function and keep social order thus without it society would break down. Although secularisation of religion appears to be occurring society is still functioning.

It could also be argued that religion can create conflict and division amongst society, for example there have been several world conflicts due to religious beliefs which highlights that religion does not create social solidarity as the functionalists suggest. Marxists however criticise the functionalist view as they argue religion is a unifying source that strengthens the value consensus and is a feature of all society. They see religion as a feature only of class-divided society. In such a society, there is always the potential for class conflict, and Marx predicted that the working class would ultimately become conscious of their exploitation and unite to overthrow capitalism.

This would then mean society being classless in which there would no longer be exploitation, and Marxists see religion as a feature only of a class-divided society. As such, there will be no need for religion in classless society and it will eventually disappear entirely. In the Marxist view, religion operates as an ideological weapon. Religion misleads the poor into believing that their suffering is virtuous and that they will be favoured in the afterlife. Such ideas therefore create a false consciousness. Marx however ignored the positive functions of religion such as psychological adjustment to misfortune. Neo-Marxists see certain forms of religion as assisting not hindering the development of class consciousness. 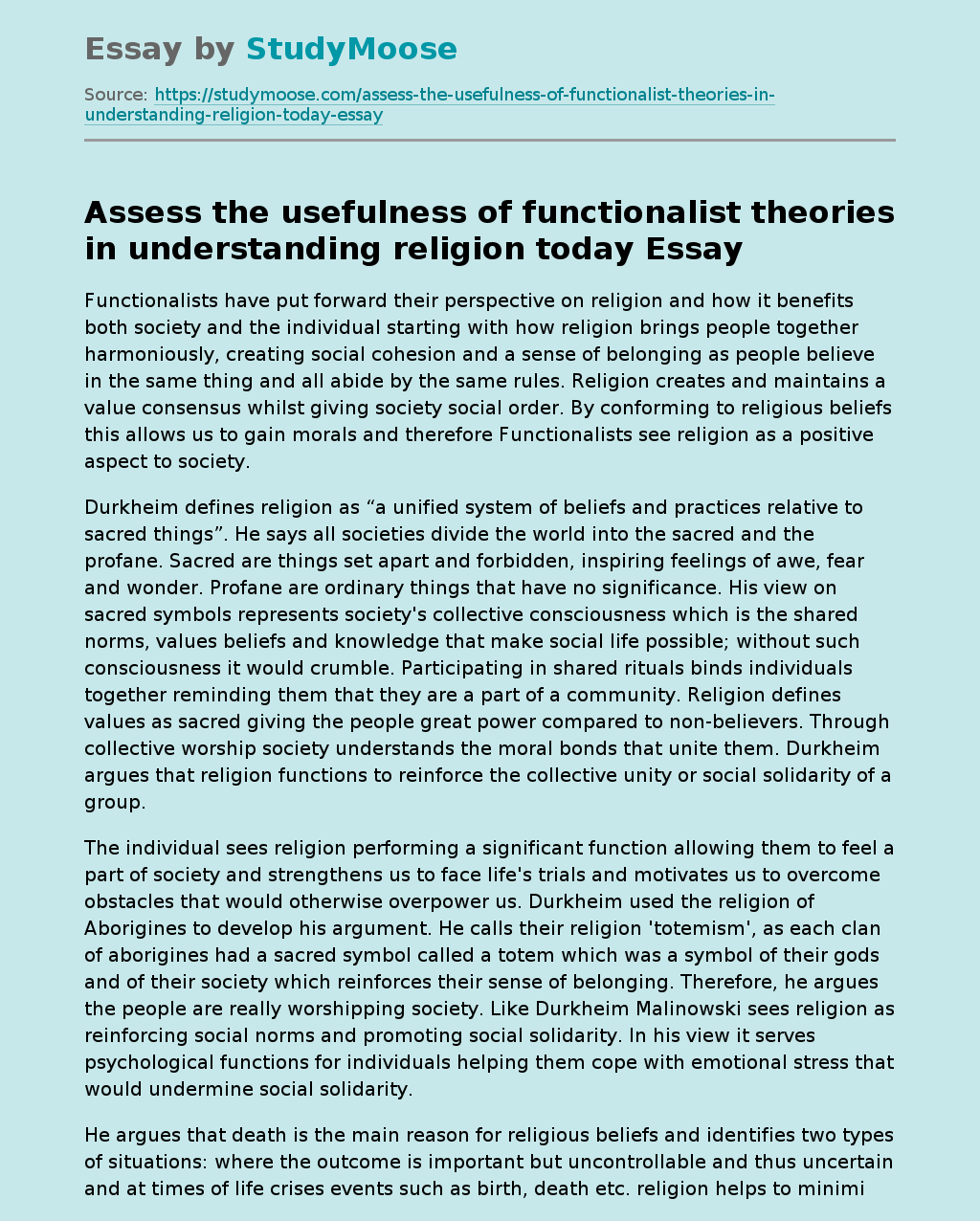