Functionalist and Marxist Theories of Stratification

Stratification is the separation of society into layers which are distinguished by unequal rewards and life chances and many systems of stratification have been based on slavery, caste and feudalism.

Slavery, being the oldest and most extreme form of stratification, involves the enslavement or ownership of others. This ownership came about as a result of conquest, trade, kidnapping, hereditary status or the repayment of a debt. The classic example of the caste system is based on the Hindu religion, where caste codes have to be obeyed before being reborn into a new, higher caste.

Don't use plagiarized sources. Get your custom essay on
“ Functionalist and Marxist Theories of Stratification ”
Get custom paper
NEW! smart matching with writer

Feudalism stems from medieval Europe where the ranking system of status groups, known as estates, became dominant. The system was closely related to property and political power with landownership being the key.

Though gender and ethnicity have become increasingly important in recent years, social class is probably the most important form of stratification and is not seen as natural or interchangeable, but as being influenced by historical developments.

One of the most important things about social stratification is that status is passed from the head of the family to their spouse or children. This means that age, sex and personality are not forms of social stratification as they are not dependent on family background. The direct passing on of status would be an inherited title, position, wealth or power, with indirect examples being the advantages to children because of their family background. These could include language, education or occupation.

The functionalist perspective is rooted in the work of Emile Durkheim (1858-1917) and gives the view of society as an organism in which each part functions in a certain way to ensure the stability of the whole.

Though society is something which exists on its own it has a structure of parts that maintains it. The parts are institutions like the family or the church, which are “useful” or “functional” in some way, but if the institution was no longer functional it would disappear and be replaced like a passing fashion. People involved in these institutions may not be aware of their function, but because the institution exists certain effects follow. Institutions are long lasting so therefore functional.

The foundations of functionalism set down by Durkheim were later built on by other writers including A.R.Radcliff-Brown (1881-1955) who was quite clear about the meaning of functionalism when he stated:

“As the word function is here being used the life of an organism is conceived as the functioning of its structure. It is through and by the continuity of the functioning of an organism that the continuity of the structure is preserved. If we consider any recurrent part of the life process, such as respiration, digestion, etc., its function is the part it plays in, the contribution it makes to the life of the organism as a whole.”

He emphasised the structural resemblance between social life and organisms even more clearly than Durkheim and it was this that gave rise to the term structural-functionalism.

Even later than Radcliff-Brown, K.Davis and W.E.Moore (1967) explained how social inequality is necessary to motivate the more talented members of society to train to fulfil the demands of social positions which are functionally more important that others. They list the rank order of positions as religion, government, wealth and technical knowledge and point out that only a limited number of people have the talents which can be turned into the skills needed for these positions.

This takes training which means social and financial sacrifices are made, so in order to encourage people to undergo this training, and to endure the demands of the future position itself, they are given certain privileges. This may include access to scarce resources such as property, power and prestige. This access to scarce resources produces stratification but also inequality in the amount of resources allocated to different people. This inequality is both functional and inevitable.

Where functionalism uses consensus, shared norms and values and concepts such as order, harmony, cohesion and integration, Marxism takes a different view.

The Marxist perspective concentrates on the differences between groups and concepts such as control, conflict, power, domination and exploitation. This is the theory based on the work of Karl Marx (1818-1833) in close collaboration with Fredrick Engels (1820-1895) over a period of more than forty years.

Karl Marx felt that social class was the main form of inequality and saw only two significant social classes. He maintained that it was capitalist industrialisation that led to this “two class” society, the bourgeoisie who owned the means of production (e.g. factories) and the proletariat who became the wage labourers (working in the factories).

“The history of all hitherto existing society is the history of class struggles. Freeman and slave, patrician and plebeian, lord and serf, guild-master and journeyman, in a word, oppressor and oppressed, stood in constant opposition to one another…..” (Marx and Engels. 1848)

He felt that the owners exploited and oppressed the workers and used force and ideology to suppress them. He also predicted economic changes that would ultimately cause class conflict.

*Pauperisation of workers (they get poorer)

*Polarization of the two classes (more inequalities as they move apart)

Marx saw the beginning of the decline in the bourgeoisie, as companies built monopolies and reduced the numbers of owners. The proletariat were becoming poorer as they became even more exploited with the advance of industrialisation and, according to Marx, they would realise their class position and unite. Uniting the workforce using trade unions would lead to revolution, the triumph of the workers and the development of a classless, equal society.

“What the bourgeoisie, therefore, produces, above all, is its own grave diggers. Its fall and the victory of the proletariat are equally inevitable.” (Marx and Engels. 1848)

Both Functionalists and Marxist have studied education. They both looked at its relationship with the whole system and linked education with the economy.

Functionalist theories state that education meets the needs of the industrial society as well as the cultural society and has the important role of socialising the individual to fit into, and continue, the social system. Individuals are born into a society that already has an identity of its own and education has the function of passing on shared values and skills. They see that education not only responds to the demands of employers by preparing people for various jobs, which in turn produces economic growth and further investment in education, but also transmits culture through religious education, history and literature and teaches appropriate roles for age, gender and class.

Marxists believe that education enforces the inequalities of wealth and income, and the attitudes and values of members of different classes. They see that education could transform children into “simple articles of commerce and instruments of labour” by being the wage labourers of the future. They are kept in their place by schools which are seen as introducing and reproducing the inequalities of social class, making them appear normal so that the working class are hardly aware of them and therefore in a state of false consciousness.

Even though both functionalists and Marxists knew the roots of stratification were based on historic events they both show that, in contrast to the caste or feudal systems, it is defined less by religion or landownership and more by economic factors. They base their perspectives on Macro-sociological theory, and deal with society as a whole, rather than Micro-sociological theory which deals with the behaviour of the individual.

Not too many years ago functionalism was the most dominant theory in sociology, with Marxism as its main critic. It was thought that Marxism was most likely to replace functionalism but in recent years there have been dramatic changes and they have both been subject to a great deal of criticism.

In modern societies boundaries are less clearly defined, though the main class groups such as landowners and the working class can still be identified in most societies. Intermediate stratification, or middle class, has proved difficult to define and this quote, centuries ago, from Jean-Jacques Rousseau (1755) shows that stratification has a long history and will continue to be a point of contention for sociologist well into the future.

“I conceive that there are two kinds of inequality among the human species; one, which I call natural or physical, because it is established by nature and consists of a difference of age, health, bodily strength, and the qualities of the mind or of the soul, and another, which may be called moral or political inequality, because it depends on a kind of convention, and is established, or at least authorised, by the consent of men. This latter consists of the different privileges, which some men enjoy to the prejudice of others; such as that of being more rich, more honoured, more powerful, or even in a position to exert obedience.”

Stratification has become increasingly difficult to define in modern times with the loss of a traditional “working class”. Recent trends have seen an increase in size of the middle classes which none of the time-honoured social theorists could have predicted.

Many alternative theories have attracted great interest, and though functionalist and Marxist theories of stratification are still exceptionally significant, as society changes and develops, they must take their place alongside a growing number of sociological theories.

Functionalist and Marxist Theories of Stratification. (2016, Jun 21). Retrieved from https://studymoose.com/functionalist-and-marxist-theories-of-stratification-essay 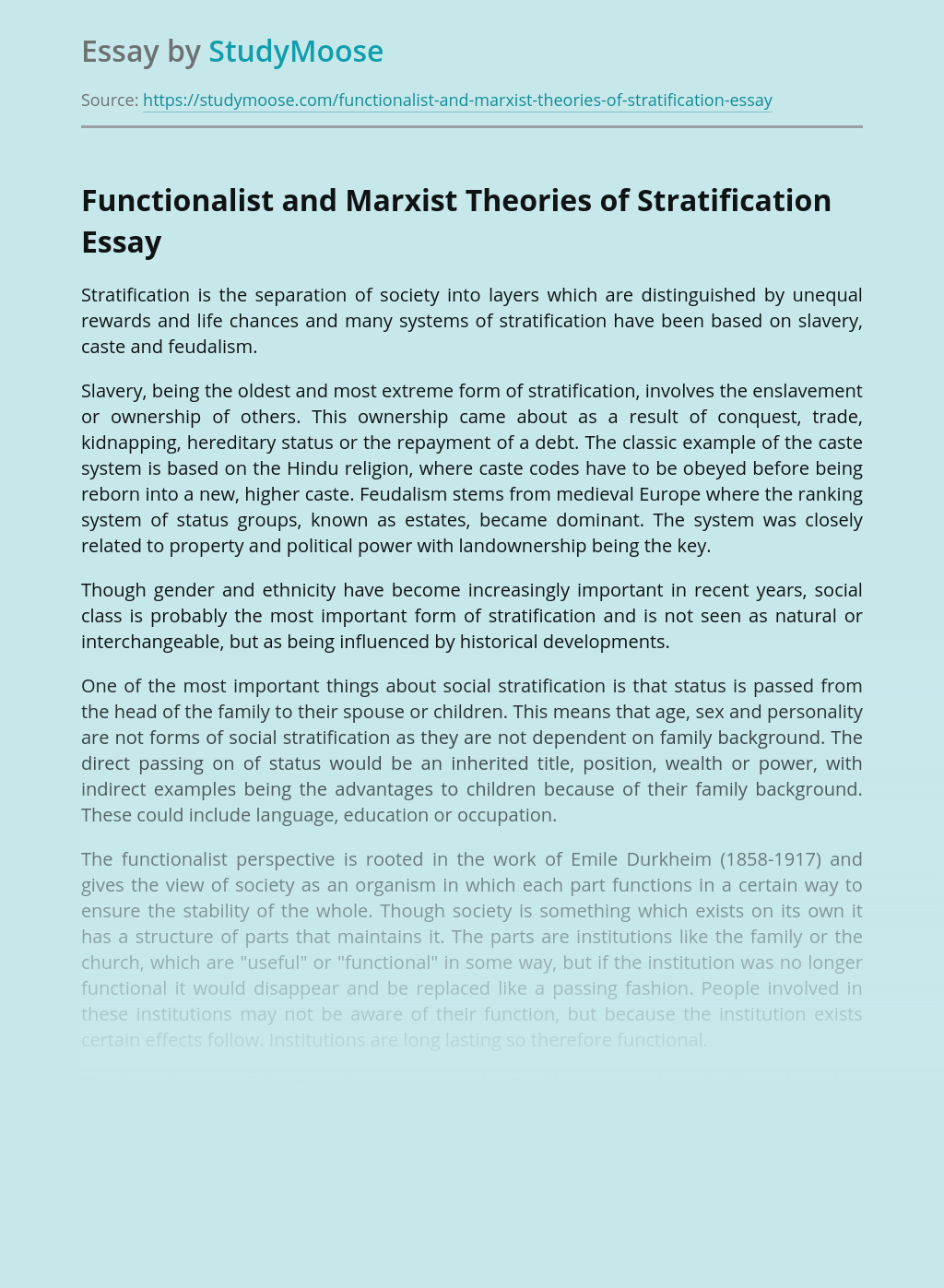