Systems and Theories of Social Statification

Social stratification is the division of large numbers of people into layers according to their relative power, property, and prestige. It applies to both nations and to people within a nation, society, or other group. Social stratification affects all of one’s life chances from the access to material processions to their position in society to their life expectancy. Although they may differ as to which system of social stratification they employ, all societies stratify their members.

The four major systems of social stratification are slavery, caste, estate, and class.

Don't use plagiarized sources.
Get Your Custom Essay on Systems and Theories of Social Statification Just from $13,9/Page

Slavery is defined as a form of social stratification in which some people own other people. It has been common in world history with reference to slavery being made in the Old Testament, the Koran, and Roman and Greek history. Slavery was usually based on debt, as a punishment for a crime, or a matter of conquest. Racism was not associated with slavery until southern plantation owners developed a new ideology to justify their enslavement of Africans in the 17th century.

Today, slavery is known to be practiced in the Sudan, Mauritania, and the Ivory Coast. The caste system is a form of social stratification based on ascribed status that follows an individual throughout their life. India provides the best example of a caste system. Based on religion, India’s caste system has existed for almost three thousand years. Although the Indian government formally abolished the caste system in 1949, it still remains a respected aspect of Indian tradition and is strictly followed by a significant portion of the population. During the middle ages, Europe developed the estate stratification system.

In the estate system there were three groups, or estates. These were the nobility, clergy, and commoners. In the last system, social stratification is based on the possession of money or material possessions. A major characteristic of the class system is that it allows social mobility, movement up and down the class ladder. Another method by which all societies stratify their members is by gender. Cutting across all systems of stratification, these gender divisions universally favor males over females. Karl Marx and Max Weber disagreed on the meaning of social class in industrialized societies.

According to Marx, people’s relationship to the means of production is the sole factor in determining their social class. They either belong to the bourgeoisie (those who owned the means of production) or the proletariat (those who work for the owners). According to Weber, Marx’s typology is too limiting since, in actuality, social class, as well as people’s social class standing, consists of three interrelated components: property, prestige, and power. Although all sociologists agree that social stratification is universal, they disagree as to why it is universal.

The functionalist view of social stratification, developed by Kingsley Davis and Wilbert Moore, concludes that stratification is inevitable because society must make certain that its positions are filled; ensure that the most qualified people end up in the most important positions; and finally, reward people for the time and energy it takes to develop strong qualifications.

Conflict theorists contend that conflict, not function, is the basis of social stratification. Italian sociologist Gaetano Mosca argued that in every society groups compete for power.

Those groups that gain power use that power to manipulate, control, and exploit the groups “beneath them.” Members of the ruling elite in every society develop ideologies that justify their society’s social stratification system. By dominating their society’s major social institutions and, thereby, controlling information and ideas, members of the ruling elite are able to socialize other group members into accepting their “proper places” in the social order. Marx believed the elite maintained their position at the top of the stratification system by seducing the oppressed into believing that their welfare depend on keeping society stable.

Systems and Theories of Social Statification. (2016, May 15). Retrieved from https://studymoose.com/systems-and-theories-of-social-statification-essay 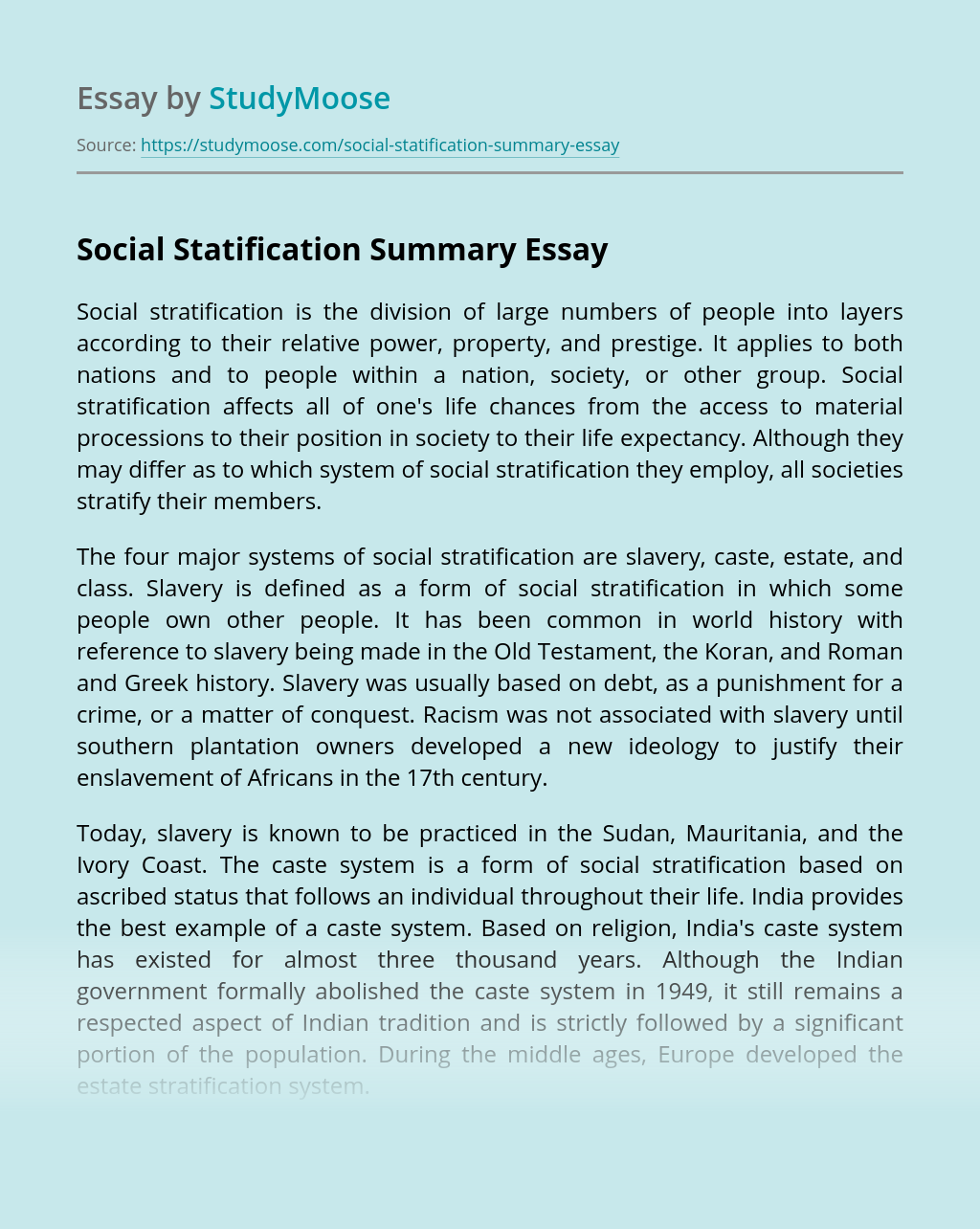 Assess the usefulness of functionalist theories in understanding religion today

Functionalists have put forward their perspective on religion and how it benefits both society and the individual starting with how religion brings people together harmoniously, creating social cohesion and a sense of belonging as people believe in the same thing and all abide by the same rules. Religion creates and maintains a value consensus whilst...

This essay is aimed at comparing and contrasting structural functionalism with the Marxist and the noe-marxist theories to social change, how they best describe social change in less developed countries; in this case Zambia. The paper is to also outline the relevance of the two approaches and come up with one that offers the best...

All throughout history, there has always been a sense of hierarchy in society such as the elites over the peasants, aristocrats over plebeians, etc. Although there was much societal change in the time of revolution, this subordination of classes did not. Sprouted from feudal society, bourgeois continues the division of societal classes: Bourgeoisie and Proletariat....

Relevance of Marism in the 21st Century

Marxism is much more than a theory or even a school of thought. The Encyclopaedia Britannica describes is a body of doctrine that was developed by Karl Marx with contributions from Friedrich Engels in the mid-19th century. Marxism is a way of viewing the world from an economic and socio-political context. Originally, Marxism consisted of...