Social workers apply theories according to how they understand people in the context of their unique circumstances, besides theories in social work are fundamental as they guide and explain social work practices. This essay will attempt to summarize psychodynamic and systems theories, highlighting similarities and differences and contrasting the application of the two explanatory theories and a practice theory to the case scenario of Mary & Patrick.

According to Preston-Shoot and Agass (1990), Psychodynamic theories derives from Freud and has been expanded and modified subsequently by the work of Jung, Hollis, Melanie Klein and object-relations theorists, as well as Goldstin and ego psychology.

Other influences are Bowlby and Howe’s attachment theory and a major proponent like Erikson developmental theories. Walsh (2010), suggest that psychodynamic theories emphasise upon the interplay between conscious and unconscious forces (p.32). Furthermore, Freud describes the importance of unconscious thought processes and defence mechanisms in determining human behaviour and human motivation (p.34). Moreover, psychodynamic theories place importance on past experiences in shaping personality “unchangeable things in the past are causing a person’s present behaviour” (Payne, 1997, p.

92). Additionally, Brearley as cited in Lishman (2007), describes that psychodynamic thinking concerns certain key relationships, like self and significant other, past and present experience, and inner and outer reality.

Hence, some of the central concepts of psychodynamic theories are Freud’s structural model of the psyche; the id, ego and superego and the mental life as operating on several levels: The conscious, the preconscious and the unconscious. Moreover, individuals develop defensive strategies to protect themselves from painful experiences thus the concepts of defence mechanisms such as denial, projection, splitting, rationalisation, sublimation and regression (Walsh 2010).

Trevithick (2012), indicates that systems theory emphasises upon understanding the transactions between people and their environment. This theory recognises that a range of systems, including the intrapersonal and interpersonal, as well as neighbourhood and society impact individuals. Additionally, Healy (2005) suggests that transactions between person-environment are complex and non-linear. According to Healy (2005), Florence Hollis introduced the term systems theory to social work. She articulates some ways in which social workers could intervene in the client’s environment. Yet, one of the founders of general systems theory was Bertalanffy, who proposed that all inter-relationships between elements form the whole and recognise that all part of the system can never be entirely separated from each other.

Another important proponent is Bronfenbrenner who proposes an ecological theory that centres on the relationship between the developing individual and the changing environmental systems, Bronfenbrenner suggests that the environment has an effect on the behaviour and how this is expressed (Guavian & Cole 1994). The social work discipline has expanded this perspective to explain that an individual is “constantly creating, restructuring, and adapting to the environment as the environment is affecting them” (Ungar, 2002). Additionally, Gordon Hearn and his colleagues pioneered the application of this theory to social work and Pincus, Minahan, Golstein, Germain, Gitterman, and Carol Meyer presented systems practice models. In recent years, Colin Peile proposed complex systems ideas in social work (Healy 2005).

Furthermore, The different relationships of development called the microsystems; mesosystems and macrosystems are central concepts in systems theory. Microsystems, which refer to the relationship between a person and the immediate environment, such as school and family. Macrosystems refer to institutional patterns such as the economy, customs and policy. Other concepts such as homeostasis, defined as “the tendency of a biological organism to seek and keep some kind of operating balance in its internal process” (Leighninger, 1978, p.448). Finally, other fundamental concepts to consider are input, feedback, roles, boundaries and subsystems.

Indeed, both psychodynamic and systems theories in social work have been adapted from theories originated in other disciplines, most notably from psychology and biology. Similarly, Psychodynamic and systems theories have been criticised because many of the concepts are difficult to understand and apply. In contrast, Trevithick (2012) indicates that for Freud and all later psychoanalytic theorists, the unconscious is the central concept, which differentiates psychoanalytic perspectives from systems theories. Furthermore, psychodynamic places attention on past experiences affecting current behaviour, whereas systems look at present circumstances impacting the individual. Finally, it is possible to say that psychodynamic theories focus on the individual’s behaviour, whereas systems locate individuals within their wider contexts.

From a systems perspective, a social worker could start by considering Mary’s family and social supports. It would be a good idea to use an ecomap for Mary and her family to gather data and analyse the impact that multiple systems are having in her situation. From an ecosystem perspective, the social worker could promote a supportive community for Mary. For instance, at a micro level the social worker could help Mary with the foster family or child care arrangements so that she does not have to travel so far with her baby, and so it is less stressful for her to go on visiting her other children. Other considerations to take into account could be exploring if Mary has anyone to whom she can turn in times of crisis, or if she has any friends, family, religious or community groups that can support her, or if social isolation is placing Mary at greater risk. Furthermore, exploring her relationship with her husband and visiting arrangements in jail. At a meso level, the social worker could consider external resources to help her financially so she can maintain her housing or alternatives for work or training.

By applying psychodynamic theory, a social worker could consider whether Mary’s lost of her parents have contributed to her unconscious conflicts or if other experiences of her past are affecting her mental stability. Furthermore, psychodynamic theories could be applied to understanding Mary’s and the children’s life stages and developmental needs. Is Mary functioning as a responsible adult? Is she able to appreciate the developmental needs of her children, especially her infant? Moreover, psychodynamic theory could be applied to interpret ways in which Mary’s defence mechanisms may be functioning. What role does denial play in the appraisal of her situation? From a strengths perspective, good practice would be to address her isolation. It would be good to encourage her to include more positive social interactions and use available resources. Moreover, recognizing the strengths that Mary possesses, reinforcing Mary’s capacity for wanting to seek help and empowering her to continue addressing her mental illness. Likewise, acknowledging her resilient characteristics.

From this perspective the social worker needs to positively engage with Mary by asking good questions. This may involve asking: How have you managed to keep going? What would you like to see happening? What visions do you have for the future? What are you proud of? What would you like to change? How can I help you to achieve this change? In conclusion, each of these theoretical positions makes an important contribution to our understanding for practice. Both psychodynamic and systems theories have their strengths and weakness but can be helpful for understanding the client’s situation. Although a theory might seem to fit to a service-user, this doesn’t necessarily mean that this is the correct understanding of that person’s life so even if a theory appears to work, it is important to remain open-minded and maintain our reflective thinking. Likewise, when evaluating a theory’s applicability, social workers must consider whether the theories are helpful to understanding and/or responding to their client’s circumstances. 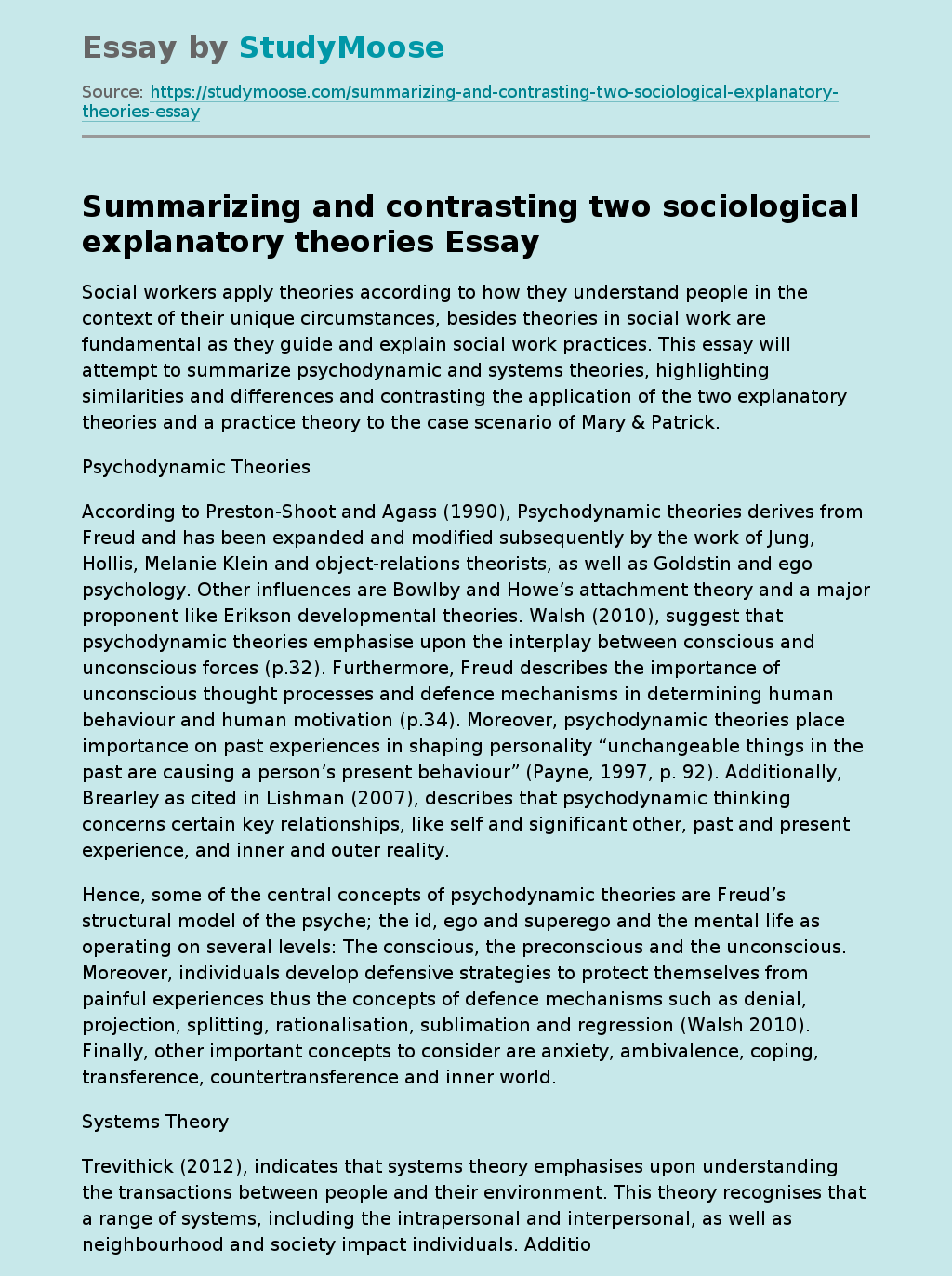