Individuality is expressed through unique behavior, also known as personality. Personality can be broken down into four perspectives, psychoanalytic, humanistic, social cognitive, and trait. Each perspective describes in detail what helps compare and contrast individuals to one another. Personality theories go into further detail from the perspective. Assessing personality has been around from years, yet it is still questioned whether it is reliable.

Psychoanalytic perspective describes the how the unconscious mind helps mold personality. According to Sigmund Freud, this perspective thrives from early childhood experiences.

Don't use plagiarized sources. Get your custom essay on
“ Personality Theories ”
Get custom paper
NEW! smart matching with writer

Psychoanalytic perspective is beyond one’s control, because it derives from unspoken, unknown, and out of reach aspects of one’s life. For example, if a teacher calls on a student, but instead of saying the students name she calls her own child’s name. Freud would argue that the mother unconscious mind made her say her own child’s name instead of the student’s. Maybe she was supposed to tell her child something or do something for that child.

Michael, a 36 year old man, has a habit of chewing on pencils. Michael’s father died when he was three years old, unbeknownst to him, his father had the same habit. Michael most likely picked up the habit from his father. Humanistic perspective is when an individual has positive growth through self-awareness or free will. Humanistic theorist, tend to focus on the subjects positive aspects and what motivates them, whether than looking solely on abnormal behaviors.

Through humanistic perspective individuals are motivated to achieve a greater good.

Social cognitive perspective is the opposite of psychoanalytical perspective, by being influenced through conscious thought. With social cognitive, particular feelings or thoughts alter how a person reacts to certain situations. Karen works for a company where the Vice President, is less than personable. Whenever Karen is called to the Vice President’s office, she begins to feel worried. She does not make eye contact and she speaks faintly when in the presence of the Vice President. On the other hand, the President of the company is a people-person. Every morning before he goes to his own office he speaks to everyone. When Karen is called to his office she laughs and jokes, and makes eye contact while engaging into conversation. These two examples show how Karen’s feelings towards the two managers decipher how she reacts to them. Trait perspective, involves describing one’s individual attributes that make up their personality. For example Hector is kind, funny, frugal, yet loud. These are all traits that describe Hector’s personality. Theorist Cattell’s focused on sixteen different traits that he believed should be used to indentify an individual’s personality.

Assessing personality may seem like a difficult task, yet there are two main categories used: projective testing and self-report inventories. Projective tests are good when trying to determine an individual’s current mindset. Many have argued that the testing is not controlled enough to produce accurate responses. The Inkblot Test and Thematic Apperception Test are two of the commonly known projective assessments. They both are used today, yet for more of a counseling technique. Self-report inventories are questionnaire-like test that allow the participant to select the best answer that pertains to them. The answers are then compared to standardized answers. Assessments benefit theorist because it allows them to easily evaluate subjects. Many question whether they can be considered an accurate depiction of personality, participants can easily falsify responses or the assessors could misinterpret them. Personality is what makes everyone unique. What motivates us to respond certain ways, or even if we are motivated altogether has been studied by many. Theorist ranged from believing that personality is predetermined either at birth or during infancy to personality being something that is formed throughout one’s life. Regardless on when it is developed it is easy to say personality is the core of one’s being? 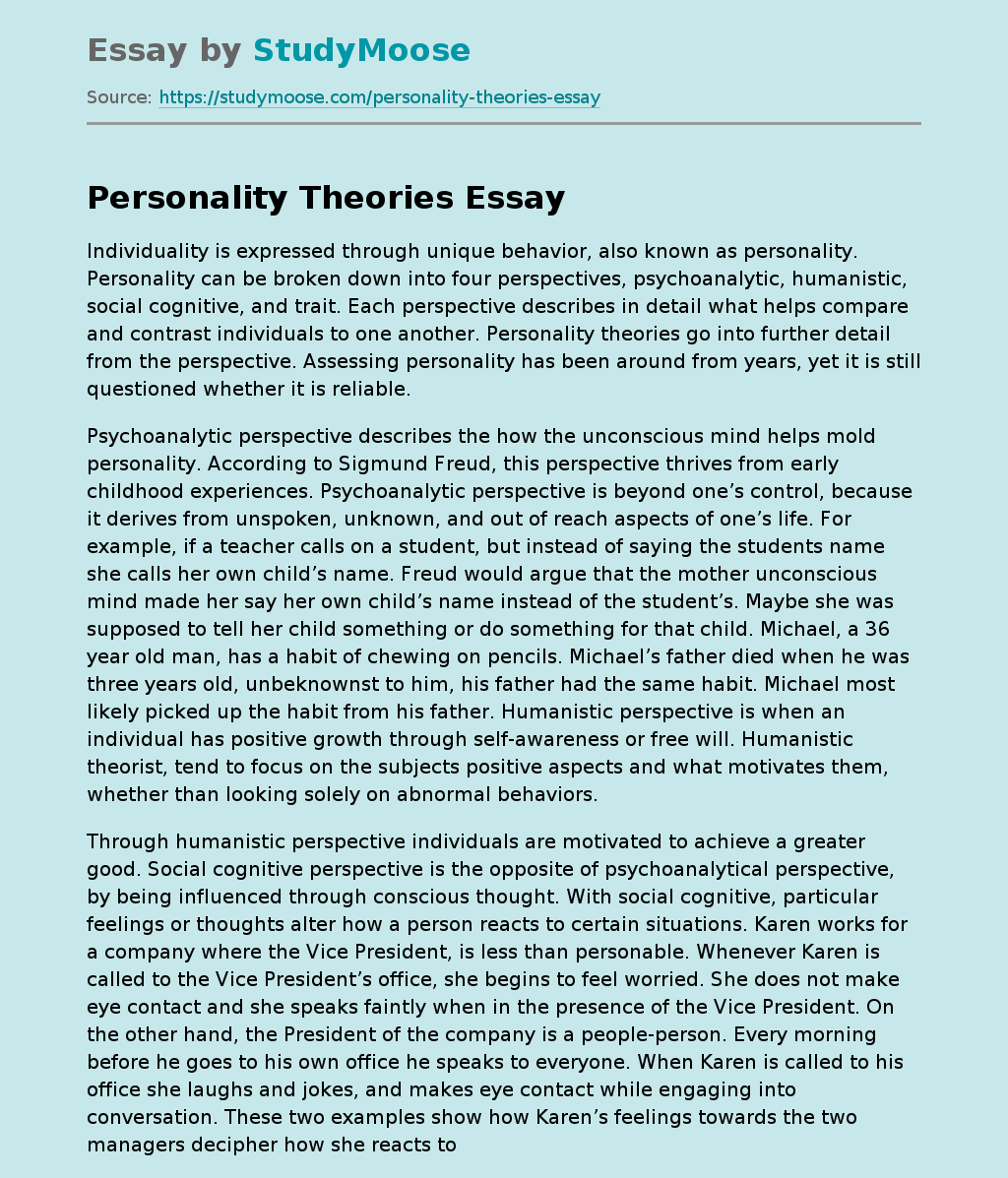