Don't use plagiarized sources. Get your custom essay on
“ Howard Gardner’s Theory of Multiple Intelligence ”
Get custom paper
NEW! smart matching with writer

Gardner’s theory means that there are more than the traditional three ways to learn. It means that people have more ability than what was originally expected.

Howard Gardner’s Multiple Intelligence Theory has eight intelligences or area of abilities. These eight intelligences are; verbal-linguistic, logical-mathematical, bodily-kinesthetic, visual-spatial, interpersonal, intrapersonal, musical, and naturalist. Verbal- Linguistic is the ability to communicate through language; reading, writing, speaking, and listening. A few of the skills associated with this ability are; remembering terms easily, mastering a foreign language, and using speech or writing to convince someone to do something or believe something.

The following techniques will maximize the ability of verbal-linguistic; use a computer to retype and summarize notes, read text and highlight selectively, outline chapters, and recite information or write scripts/debates. Logical-mathematical is the ability to understand logical reasoning and problem solving; math, science, patterns, and sequences. Recognizing abstract patterns, using facts to support an idea, and generating ideas based on evidence, reasoning scientifically (formulating and testing a hypothesis) are some of the skills of the logical-mathematical intelligence.

Organize material logically; if it suits the topic, use a spreadsheet program, explain material sequentially to someone, develop systems and find patterns, and analyze and evaluate information are just a few of the ways to maximize this intelligence. Bodily-kinesthetic is the ability to use the physical body skillfully and to take in knowledge through bodily sensation; coordination, working, with hands. The skills associated with bodily-kinesthetic; strong mind-body connection, controlling and coordinating body movement, and using the body to create products or express emotion. Moving while you learn; pace and recite, rewrite or retype notes engage “muscle memory”, design and play games to learn material, and act out scripts of material are the techniques to maximize this intelligence. Visual-spatial is the ability to understand spatial relationships and to perceive and create images; visual art, graphic design, charts and maps.

A few of the skills for visual-spatial are; recognizing relationships between objects, representing something graphically, and manipulating images. To maximize the intelligence of visual-spatial you can do the following; develop graphic organizers for new material, draw mind maps/think links, use a computer to develop charts and tables, and use color in notes to organize. Interpersonal intelligence has the ability to relate to others, noticing their moods, motivations, and feelings; social activity, cooperative learning, and teamwork are just a few. Skills for the interpersonal intelligence are; seeing things from others’ perspectives, noticing moods, intentions, and temperaments of others, and gauging the most effective way to work with individual group members.

The best techniques to maximize this intelligence are; studying in a group, discuss material over the phone or send instant messages, teach someone else the material, and make time to discuss assignments and test with your instructor. With the intrapersonal intelligence you have the ability to understand one’s own behavior and feelings; self-awareness, independence, time spent alone. Skills associated with this intelligence are; accessing one’s internal emotions, understanding feelings and using them to guide behavior, and understanding self in relation to others. To maximize the intrapersonal intelligence use these techniques; reflect on personal meaning of information, keep a journal, study in quiet areas, and imagine essays or experiments before beginning. The musical intelligence has the ability to comprehend and create meaningful sound; sensitivity to music and musical patterns. The skills associated with the musical intelligence are; sensing tonal qualities, being sensitive to sound and rhythms in music and in spoken language, and using an understanding of musical patterns to hear music.

To maximize the musical intelligence you need to use these techniques; create rhythms out of words, beat out rhythms with hand or stick while reciting concepts, write songs/raps that help you learn concepts, and chant or sing study material along with a favorite tune as you listen. A naturalist has the ability to identify, distinguish, categorize, and classify species or items, often incorporating high interest in elements of the natural environment. A naturalistic has skills that give them the ability to categorize something as a member of a group or species, understanding of relationships among natural organisms, and deep comfort with, and respect for, the natural world. To maximize the naturalistic intelligence these techniques are best; break down information into categories, look for ways in which items fit or don’t fit together, look for relationships among ideas, events, facts, and study in a natural setting if it helps you to focus.

The two intelligences that apply most closely with me are verbal-linguistic and interpersonal. I would say that I have very good people skills, meaning that I can communicate well with and to others. I can remember terms easily because I write them down on index cards and study them that way. I am always taking notes and going back and rewriting them and then highlighting the most important information out of the notes, that gives me the verbal-linguistic intelligence. I relate well to others and feel that I am a good judge on picking up on their feelings and moods, which means that I have very good interpersonal intelligence skills. I work well in teams or alone, and can get along with just about everyone I meet. I’m really good at putting myself in another’s shoes so to speak, and seeing things from their point of view. With all things considered I feel that these are my two best intelligences, verbal-linguistic and interpersonal. 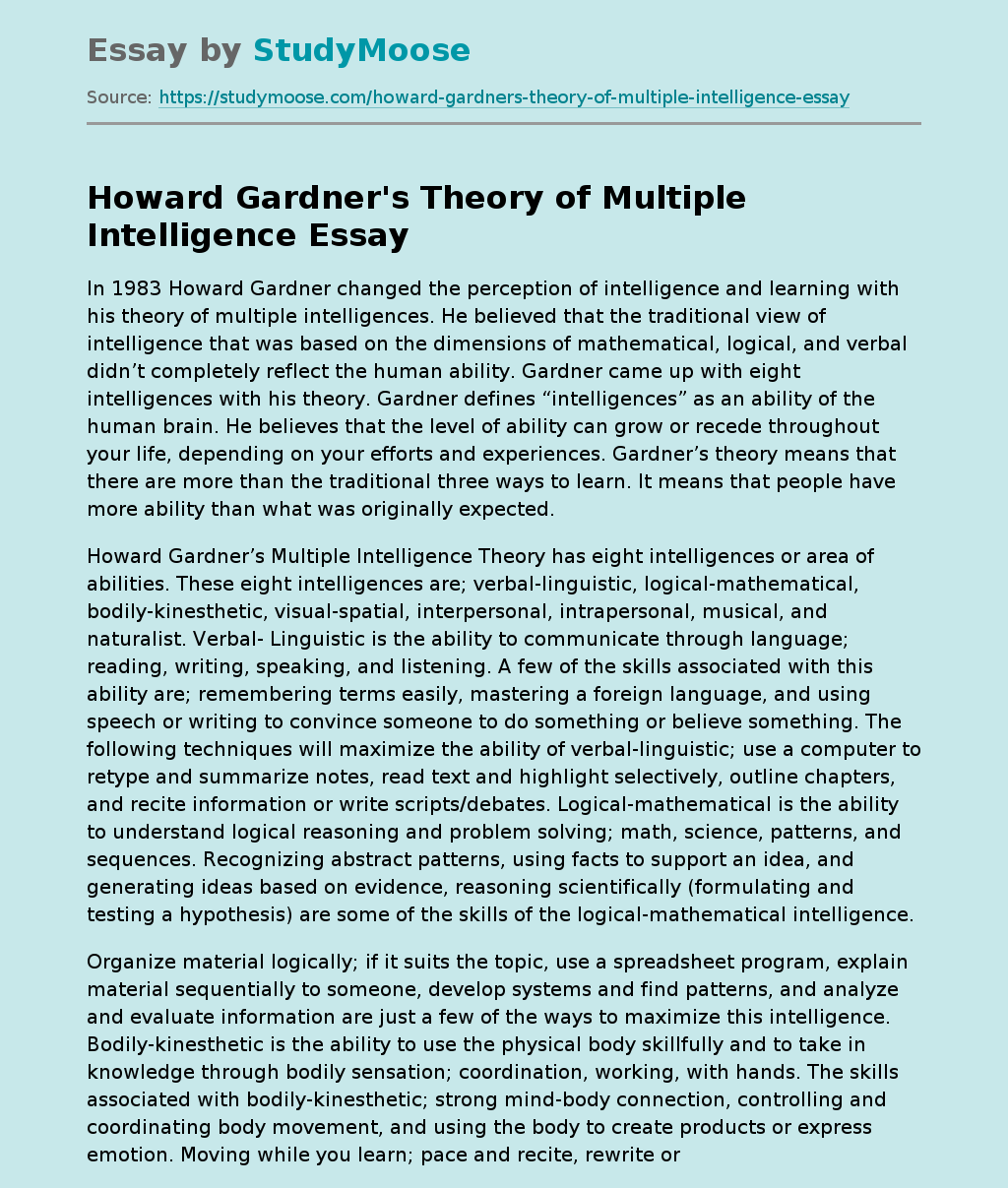