Throughout John Gardner’s novel, Grendel, there are many literary tools and compositional risks used to support the overall meaning of the story and to show change in the main character, Grendel. One compositional risk that Gardner uses extremely effectively is motif. A motif is defined as recurring structures, contrasts, or literary devices that can help to develop and inform the piece’s major themes. The most effective motif Gardner uses over the course of the novel is the recurring references to the signs of the zodiac.

Don't use plagiarized sources. Get your custom essay on
“ Motifs in Grendel ”
Get custom paper
NEW! smart matching with writer

Other important motifs referenced in Grendel are the seasons, machinery, and the number twelve. Starting in chapter one, Gardner effectively uses the zodiac signs to reinforce the changes in Grendel and the changes in time. Grendel is split into twelve chapters, each corresponding to a different zodiac sign. In each chapter, one of the twelve zodiac signs is referenced at least once. The zodiac references also appear in the exact order as the calendar, starting with Aries in chapter one and ending with Pisces in chapter twelve.

In fact, the very first sentence of the novel is a reference to the first zodiac sign. “The old ram stands looking down over rockslides, stupidly triumphant. ” (Gardner 5) This is a very simple zodiac reference and other simple references occur in chapters two and ten, when Grendel encounters a bull and goat respectively. However, some of the zodiac references are tougher to locate. Chapters five and seven are among the difficult references. Chapter five refers to Leo the Lion, but a lion is never mentioned in the text.

Chapter seven refers to Libra the Balance. The reader must infer the peace offering of Wealtheow to represent a force of balance between the Scyldings and the Helmings. Another motif used extremely effectively throughout Grendel is the seasons. Grendel is not a novel written in chronological order. The book begins somewhat at the end, then enters a series of flashbacks, and ends in the present. However, even though the novel skips around chronologically, it is patterned after the passage of a one-year calendar.

The novel begins in the spring of Grendel’s last year alive and ends with him dieing the following winter. This is appropriate because spring normally represents growth and new beginnings, so this is an ideal place to start a story. It is also appropriate because winter normally symbolizes death and Grendel is slain by Beowulf during the winter. Machinery is another motif used to perfection by Gardner in Grendel. Many times throughout the course of the novel, Grendel uses metaphors describing animals and humans as “machine-like” because they mindlessly adhere to set patterns of behavior.

Grendel first notices this in the ram, which instinctively responds to the arrival of spring and will not leave no matter what Grendel does because the season is upon us. “I shake my two hairy fists at the sky and I let out a howl so unspeakable that the water at my feet turns sudden ice and even I myself am left uneasy. But the ram stays; the season is upon us. ” (Gardner 5) Later in the book, Grendel describes himself as “mechanical as anything else” when the warm weather causes him to start his raids on the mead hall.

One final motif used throughout Grendel is the significance of the number twelve. To start off, there are twelve months in a year and the narrative is broken into twelve chapters. Next, there are twelve zodiac signs and all twelve zodiac signs are referenced in the book. Finally, there are twelve years in the war between the Danes and Grendel, with Grendel being slain via Beowulf in the twelfth and final year of the war. Obviously the number twelve is a recurring theme throughout the novel making it a very significant motif.

A motif is defined as recurring structures, contrasts, or literary devices that can help to develop and inform the piece’s major themes. John Gardner uses many motifs throughout Grendel to help explain the story and themes in the story. The most effective motif used is the zodiac symbolism in each chapter, but the motifs of the seasons, machinery, and the number twelve are also imperative in helping explain the overall meaning of the story. Motifs should be used whenever possible to help explain a story, plus they provide readers with an interesting topic for debate when discussing a novel. 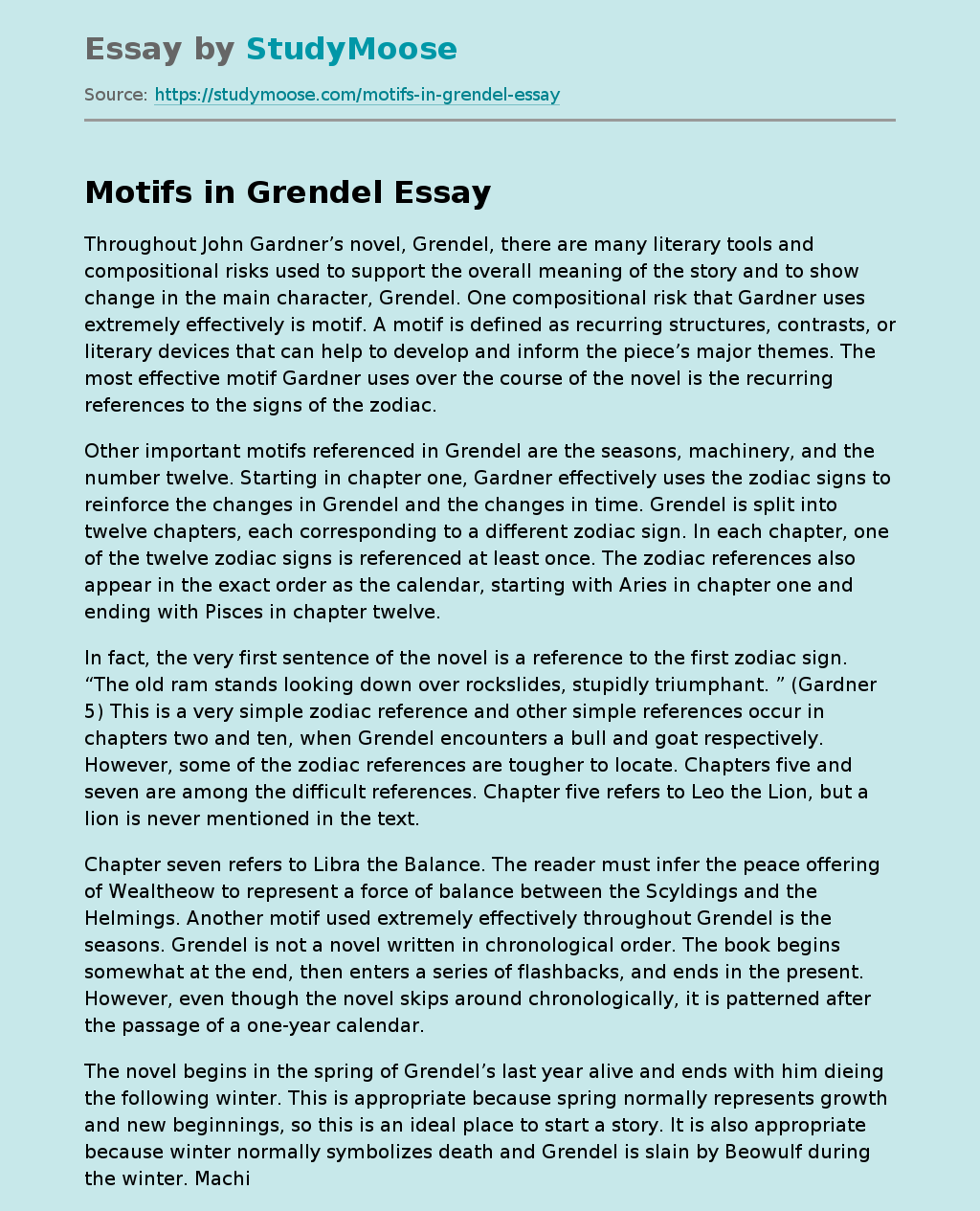