Charles Spearman (1904) defined and developed a unilinear testing approach to general intelligence (g), which is based on a positive correlation among varying subjects like math, earth sciences and vocabulary. Gardner (1983) proposed there were multiple intelligences (MI), or seven areas of intelligence, linguistic, musical, logical-mathematical, spatial, bodily-kinesthetic, intrapersonal, and interpersonal, and that each person has more than one of these skills. While testing of g intelligence is still used to assess overall IQ, universities and corporations look at the wider consideration offered by Gardner.

Don't use plagiarized sources. Get your custom essay on
“ Spearman VS. Gardner ”
Get custom paper
NEW! smart matching with writer

Spearman’s theory creates an environment that places strong emphasis on getting a high IQ score and high scores on a number of placement tests useful for schooling. However, as Gardner has said, these place too high an emphasis on IQ and test scores, and in ignores certain intelligences and abilities that people can bring to the workforce. Relying solely on IQ test scores not only can exclude an individual with superior a talent (g) from getting a proper education in the area of expertise, but can eliminate the individual from the education and professional arena altogether.

We are all endowed with multiple, genetically determined forms of intelligence that can be enhanced through practice and learning, yet this is ignored in the process of rewarding individuals for high IQ according to Spearman.

Unfortunately, MI theory is only just being put into practice at the educational level. Wallace Shilkus, a middle school technology education teacher in Illinois, “wanted to know how relevant technology education was to middle school students; whether his methods of instruction made a difference in the classroom; and whether Gardner’s multiple intelligences had a role to play in the classroom.

” (Merrill, 2004, 6). Shilkus tied the in-class study to action research to document his teaching methods and benefits to his students in 2001, and found (using CO2 cars as the activity) that his students demonstrated “most of the intelligences. Throughout this process, Shilkus noticed differences in himself as the teacher and his students as the learners. Moreover, Shilkus discovered that by presenting the material and requirements of the CO2 car activity in different forms, the students excelled.” (Merrill, 2004, 6).

I believe that Gardner’s Multiple Intelligence in more inline with society today. Knowledge cannot be put into just two types and tested that way. There are many different types of knowledge and if you included more of them into tests and stopped timing people on tests there would be a clearer understanding of why there are so many people failing the tests. You would know exactly what is wrong and could teach them more in-depth on that subject. Common sense is also a type of intelligence that needs to be tested if testing for the perfect IQ. A person could be a genius when it comes to academics, but have no understanding of common sense. You would have to be a genius in both to truly be a genius. IQ tests are not very accurate and do not go in depth enough on subjects. There may not even be a way to fully test to see if someone is a true genius. It would be a challenge to come up with a test to see if someone is an all around genius. 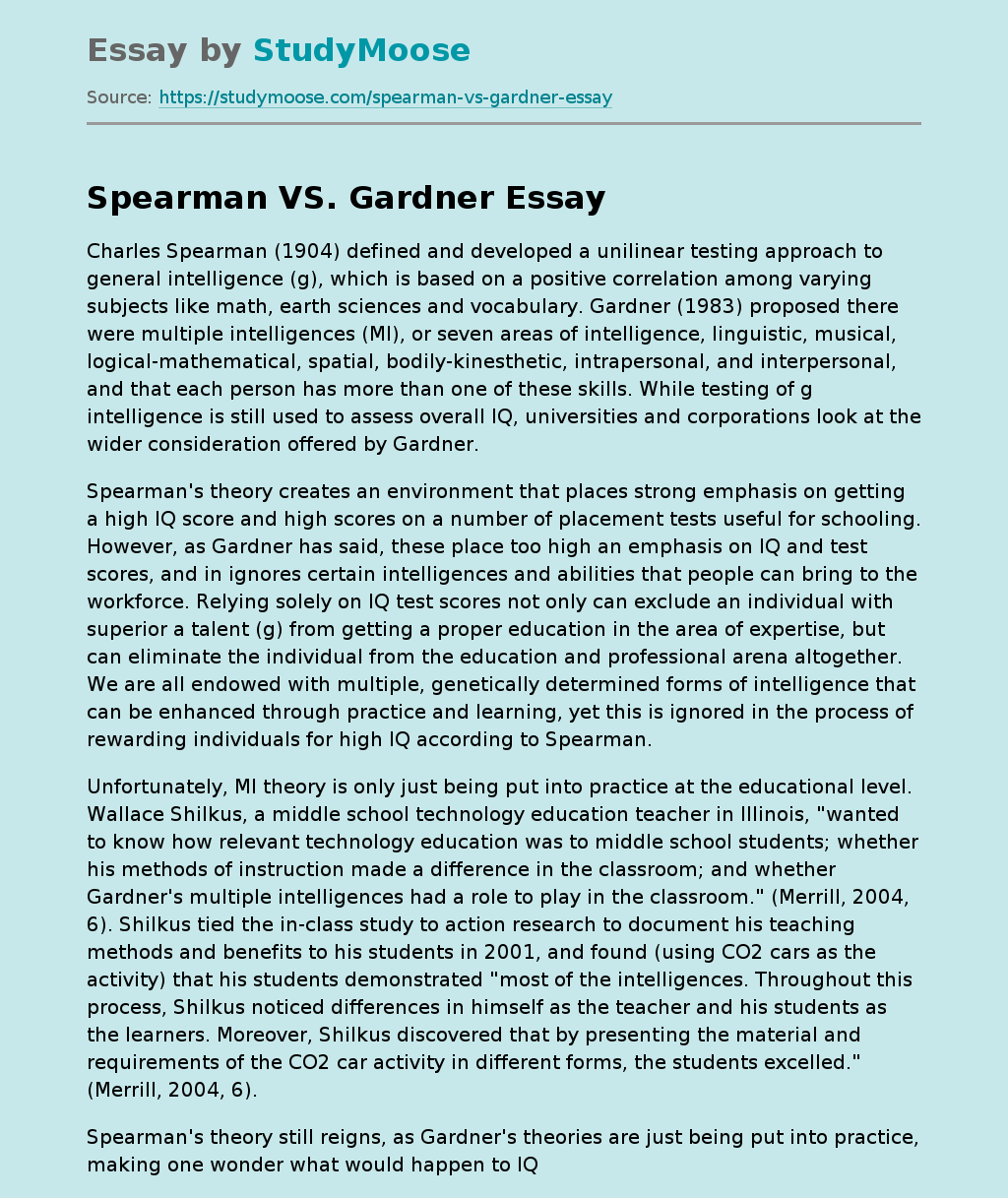