Personality development, the concept that personality is affected

Personality is the particular combination of emotional, attitudinal, and behavioral response patterns of an individual. Some ideas in the psychological and scientific study of personality include: Personality changes

Personality development, the concept that personality is affected by various sources Personality disorder Personality genetics, a scientific field that examines the relation between personality and genetics Personality pathology, characterized by adaptive inflexibility, vicious cycles of maladaptive behavior, and emotional instability under stress Personality psychology, the theory and study of individual differences, traits, and types Personality quiz a series of questions (usually multiple-choice, rating scale, or True/False) intended to describe aspects of an individual’s character, thoughts, and feelings Personality style

Personality systematics, among subsystems of personality as they are embedded in the entire ecological system Personality test, examples would include the Minnesota Multiphasic Personality Inventory (MMPI-2), Rorschach Inkblot Test, and Thematic Apperception Test (TAT) Personality type, refers to patterns of relatively enduring characteristics of behavior that occur with sufficient frequency Personality trait, refers to enduring personal characteristics that are revealed in a particular pattern of behaviour in a variety of situation

REACTION:
Personality is the unique traits of an individual and may be recognized at the early stages of their life1.

Don't use plagiarized sources. Get your custom essay on
“ Personality development, the concept that personality is affected ”
Get custom paper
NEW! smart matching with writer

Personality development can thus be defined as the development of a person’s attributes that make one unique.

Character is an individual’s entire traits or attribute that distinguishes
one person from the other.

The mental characteristics of an individual’s personality are the complex attributes that makes the individual unique and different from other people. These characteristics include all the patterns of thought and emotions that cause one to do and say things in particular ways. Fundamentally, personality is expressed through ones temperament tone. Personality also defines ones values, beliefs, and expectations. There are several possible factors that are involved in shaping an individual’s personality and are mostly seen as coming from a person’s heredity and the environment that they are exposed to.

An individual’s personality is an aggregate conglomeration of the decisions they have made throughout their life and the memory of the experiences to which these decisions led. There are inherent natural, genetic, and environmental factors that contribute to the development of our personality. According to process of socialization, “personality also colors our values, beliefs, and expectations … Hereditary factors that contribute to personality development do so as a result of interactions with the particular social environment in which people live.” Personality is defined as the enduring personal characteristics of individuals. FREUD’s

REACTION:
Personality’ is what distinguishes you from other people – the unique attributes and qualities that make you who you are. It is an accumulation of your values and beliefs, expectations, experiences and decisions you’ve
made. So the question is, what can you improve, and how will that improvement make your life better? Your beliefs are derived from your background conditioning, mostly from childhood. This conditioning happens unconsciously. Your parents, environment, social norms and expectations, experiences and other influences have shaped who you are. It’s important to realize that changing your personality is not changing “who you are” – it’s more of a software upgrade in the way you think and act, and by taking on one or two traits at a time, you make small incremental changes with a huge payoff. Underneath it all, you’re still the wonderful you, only with a higher, more attractive-to-good-things vibration.

“Personality” is a dynamic and organized set of characteristics possessed by a person that uniquely influences his or her cognitions, emotions, motivations, and behaviors in various situations. The word “personality” originates from the Latin persona, which means mask. In the theatre of the ancient Latin-speaking world, the mask was not used as a plot device to disguise the identity of a character, but instead was a convention employed to represent or typify that character.

Personality also refers to the pattern of thoughts, feelings, social adjustments, and behaviors consistently exhibited over time that strongly influences one’s expectations, self-perceptions, values, and attitudes. It also predicts human reactions to other people, problems, and stress. there are many different theories of personality, the first step is to understand exactly what is meant by the term personality. A brief definition would be that personality is made up of the characteristic patterns of thoughts, feelings and behaviors that make a person unique. In addition to this, personality arises from within the individual and remains fairly consistent throughout life.

Some of the fundamental characteristics of personality include: Consistency – There is generally a recognizable order and regularity to behaviors. Essentially, people act in the same ways or similar ways in a variety of situations. Psychological and physiological – Personality is a psychological construct, but research suggests that it is also influenced by biological processes and needs. It impacts behaviors and actions – Personality does not just influence how we move and respond in our environment; it also causes us to act in certain ways. Multiple expressions – Personality is displayed in more than just behavior. It can also be seen in our thoughts, feelings, close relationships and other social interactions. Theories of Personality

Trait theories viewed personality as the result of internal characteristics that are genetically based. Psychodynamic theories of personality are heavily influenced by the work of Sigmund Freud, and emphasize the influence of the unconscious on personality. Psychodynamic theories include Sigmund Freud’s psychosexual stage theory and Erik Erikson’sstages of psychosocial development. Behavioral theories suggest that personality is a result of interaction between the individual and the environment. Behavioral theorists study observable and measurable behaviors, rejecting theories that take internal thoughts and feelings into account. Behavioral theorists include B. F. Skinner and John B. Watson. Humanist theories emphasize the importance of free will and individual experience in the development of personality. Humanist theorists include Carl Rogers and Abraham Maslow.

Personality PSYCHOLOGY is a characteristics possessed by a person that influences his or her cognitions,emotions,motivations and behaviors in various situation.It is a unique combination of these characteristics provides the basic foundation of who you are and makes up the personality that your friends and family have come to like (and dislike!).There are many theories under personality psychology. Personality is something that arises from within and remains quite consistent throughout life, but the environment and the situation play an important role in determining how different aspects of your personality are expressed. There are four fundamental characteristics of personality. First, it is constant and people tend to behave in the same way when they encounter similar situations.

Second, personality not only influences actions, but it also actually causes people to behave in specific ways. Third, personality is influenced by both psychological and biological factors. Finally, personality is expressed not only in behaviors, but through emotions, thoughts, social behavior, and close relationships. How the world perceives you is a direct reflection of and reaction to how you present yourself to them.

Race, age, and gender are qualities you have no control over, but certainly contribute to your personality because of how the world perceives you based on these features. A person who continuously experiences racial discrimination may guard himself against it by at first seeming cold and unfriendly. But once he opens up, you may discover someone completely different inside.Dig a little deeper, and the private aspect of your being appears: dreams too bizarre to discuss; experiences too sentimental to reveal; fantasies that may seem childish to others; goals, standards, and morals you aspire to; daily internal dialogue, thoughts, and ideas — all of these elements make up the “you” that only you truly know. And only you can decide when to share these parts of your personality with others

Personality development, the concept that personality is affected. (2016, Apr 26). Retrieved from https://studymoose.com/inventory-personality-essay 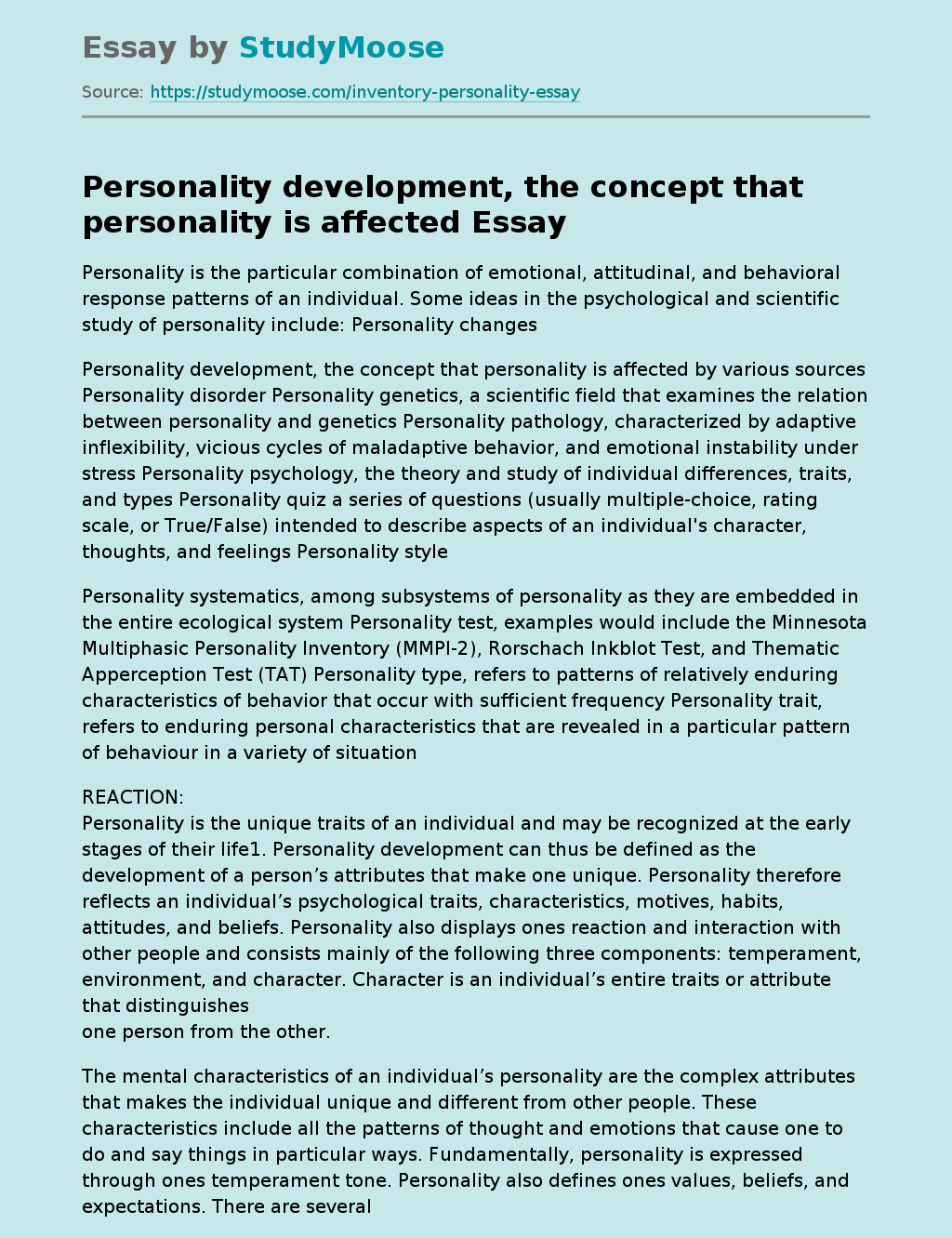